Sunset on first evening of our passage from Greece to Italy 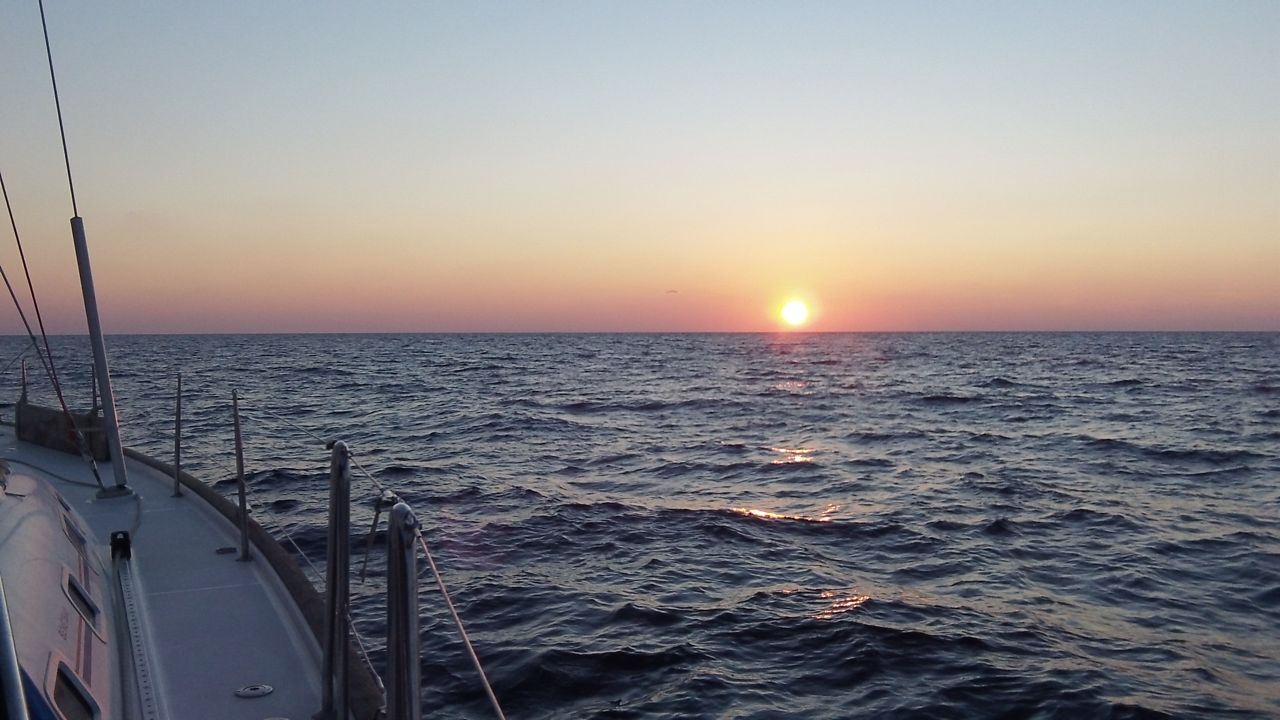 We arrived on wednesday at 6 in the morning, anchored the boat in Taormina bay, then went straight to bed. When we got up at noon, this is what we saw: Taormina sitting in the top of the hill... 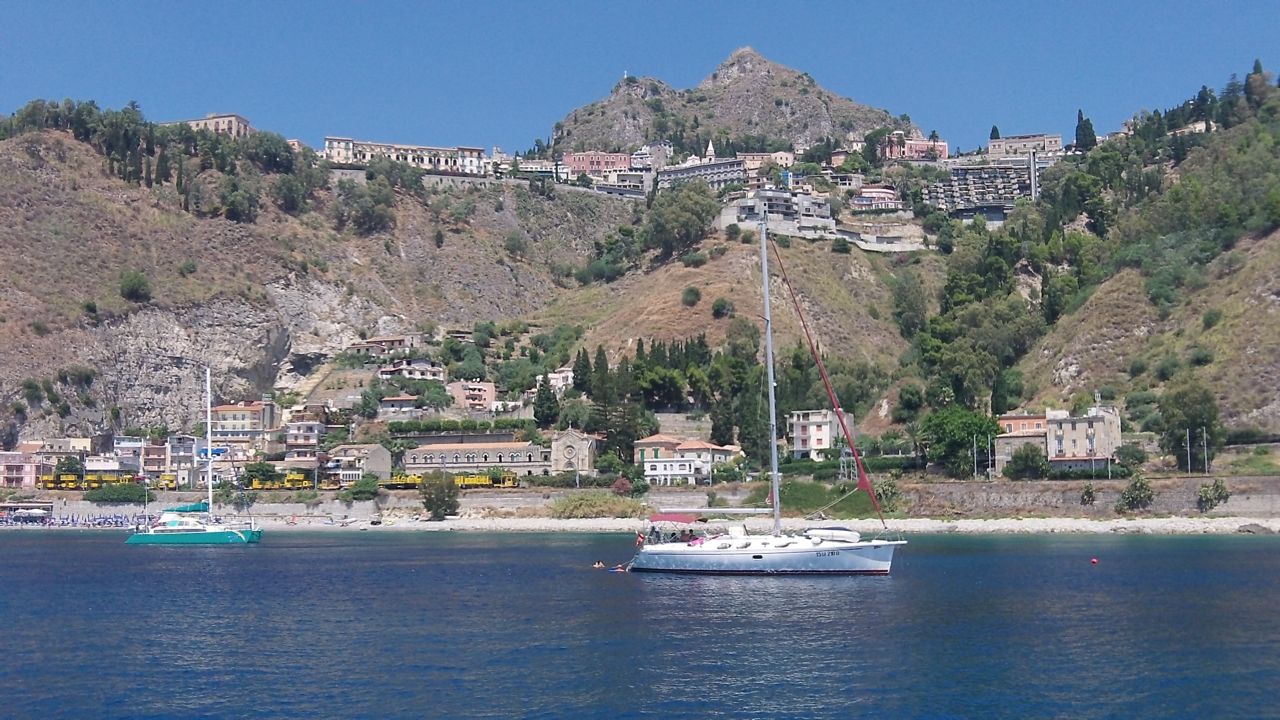 ... and Etne smoldering away at the distance. Not a bad view to have with the breakfast. 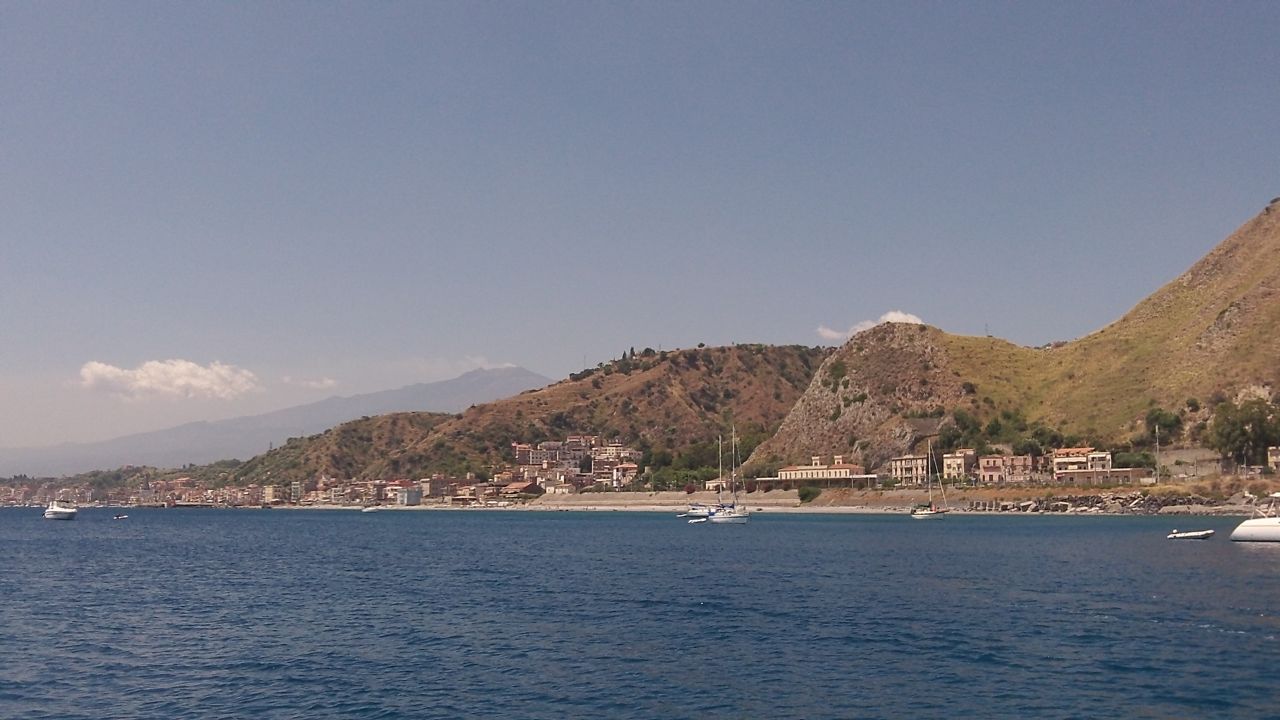 When we gathered our strengths we decided to walk up the steep hill to Taormina. 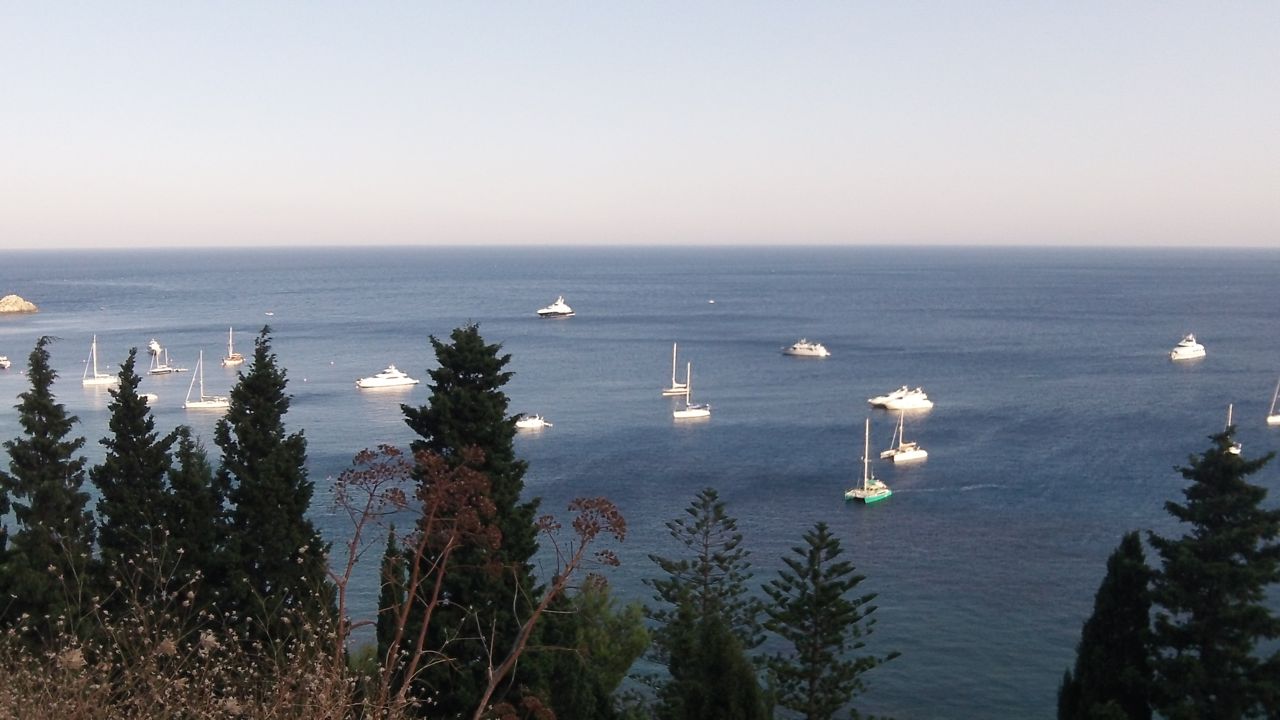 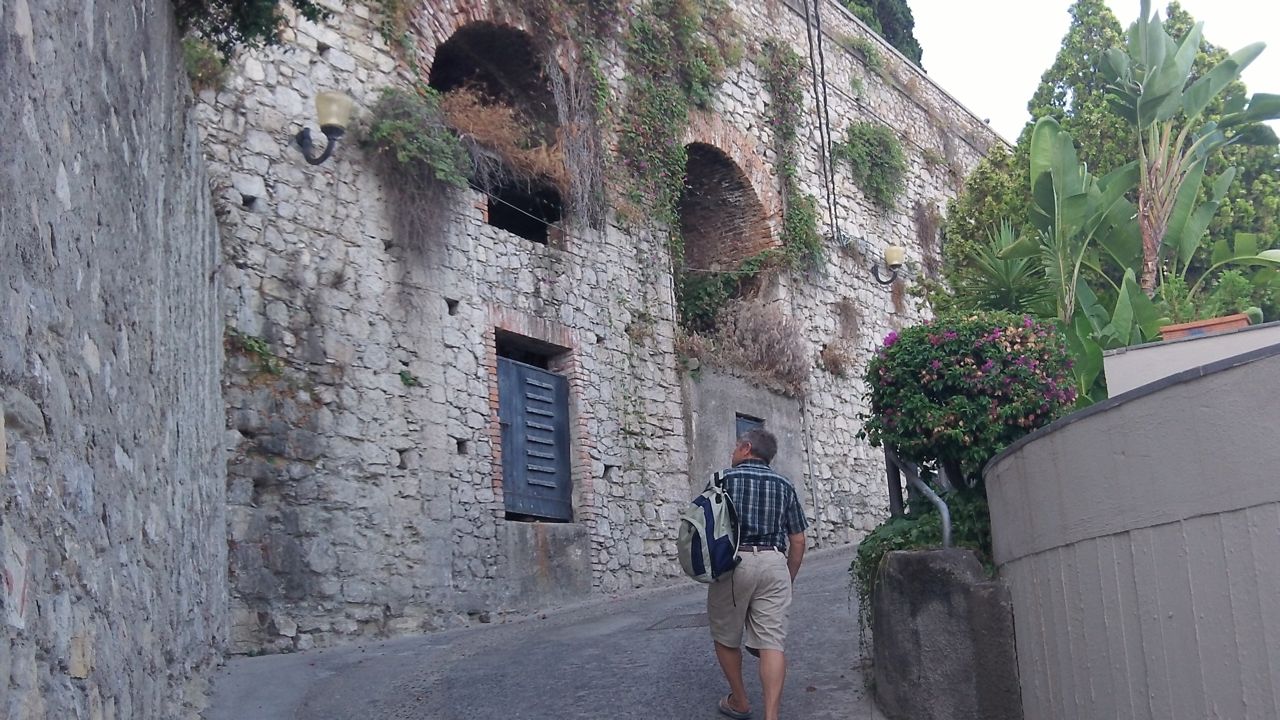 The trail was long and steep, it was still hot and we were overheating. And the suffering on the photo is genuine ... One of those boats below is ours. 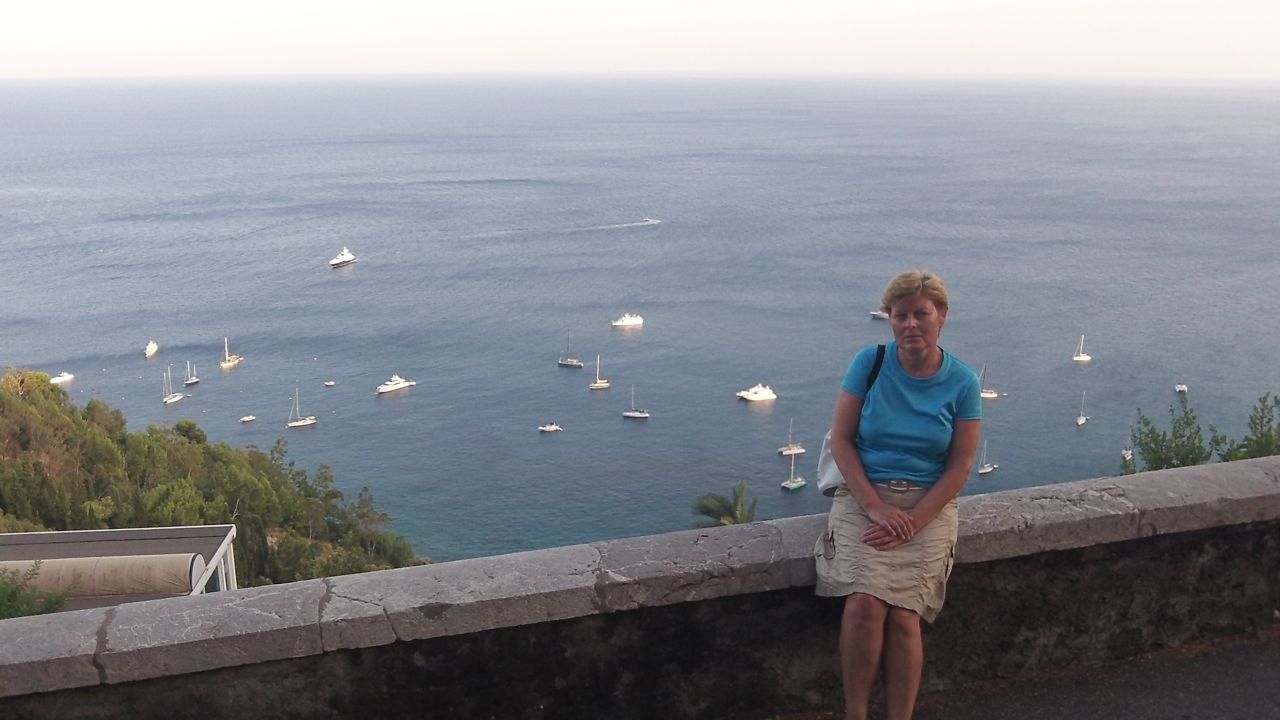 Taormina is a beautiful little town, full of history and charm, it is well worth seeing, but try not to go in August - you can see why ... 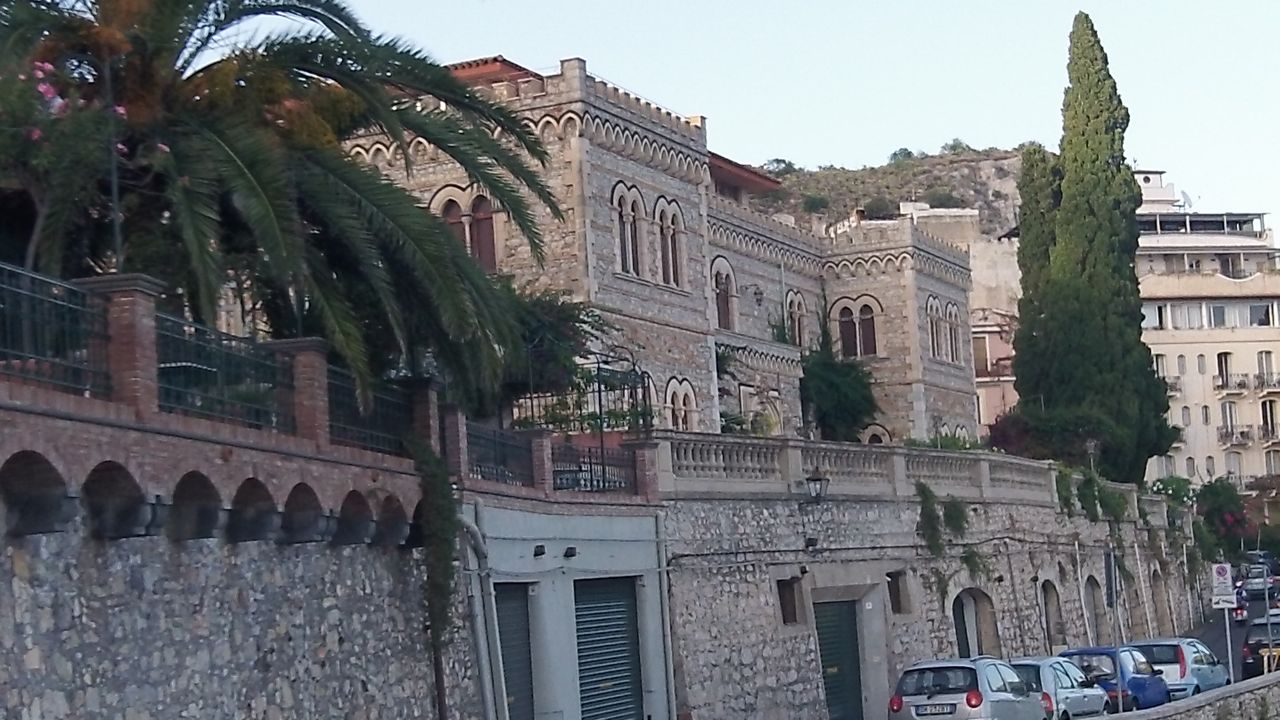 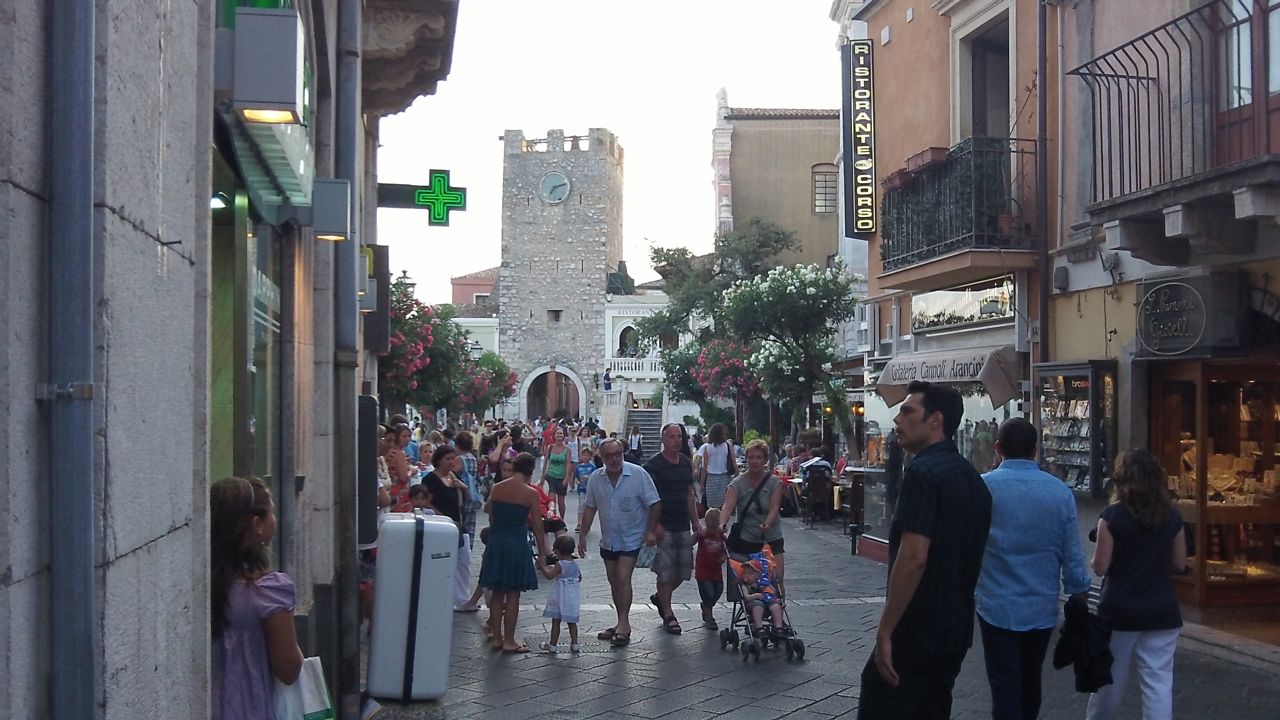 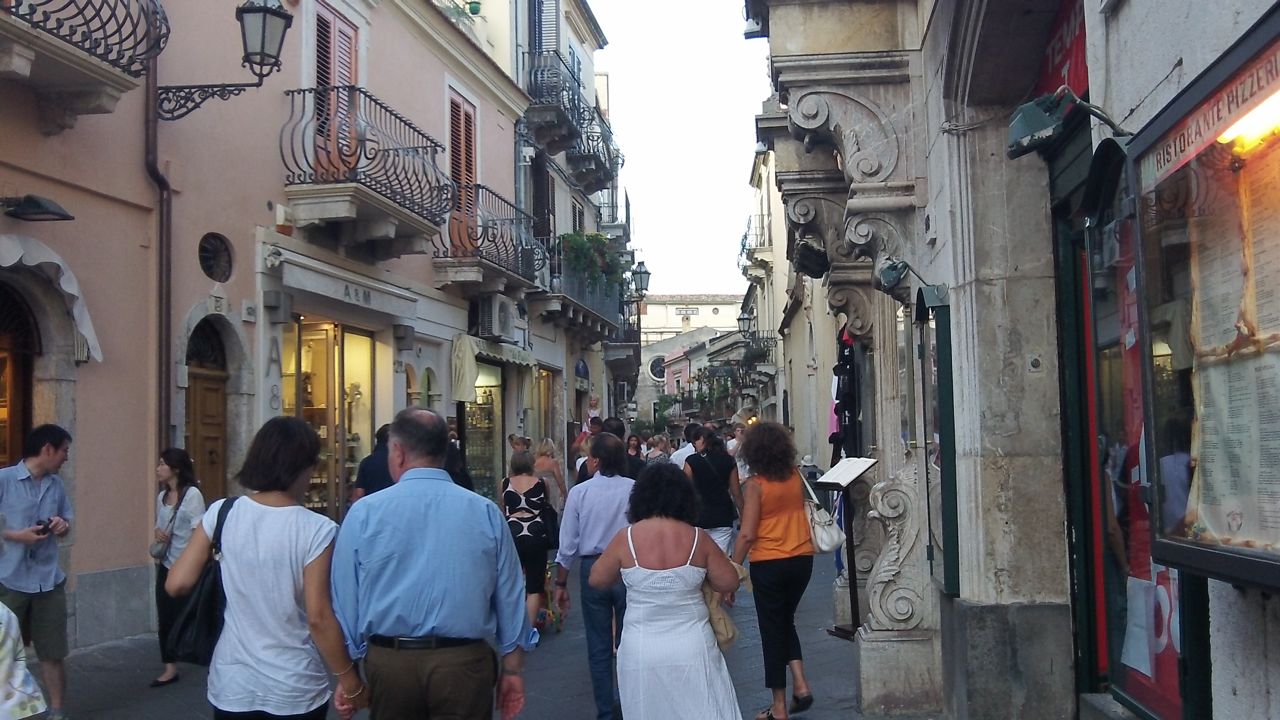 Next day we left the Taormina bay and set our course towards Messina straight. We heard (or read) a lot of stories about how tricky it can be, with strong currents, vortices and ferries traveling form Sicily to mainland and back not taking any regard of other vessels. The day started of calm, then the wind picked up, of course straight on the nose, and along came moderate waves. When we got close to Messina, ferry traffic increased, so we were both busy watching what was happening in front and behind us. We watched Messina from the sea and didn't like it to much, so we decided not to make a stop. Once we passed Messina, the wind and the waves died and strong currents and vortices appeared. There were spots where water looked like it was boiling, the rudder got heavy and there were strange things happening to our speed - with the same 2500 rpms on engine our speed went from 6 to 7,8 and then dow to 2,8 knots - and so it repeated several times. I wouldn't want to be there in a small boat with small engine.
Since we did not stop at Messina, we thought to stop for the night in Scylla at Calabrian west coast. The town itself it's a beauty, built at both side of small hill leading to the forth. Unfortunately the quay was small and full and there was no good spot to throw the anchor, so we decided to turn westwards and proceed along Sicily coast. 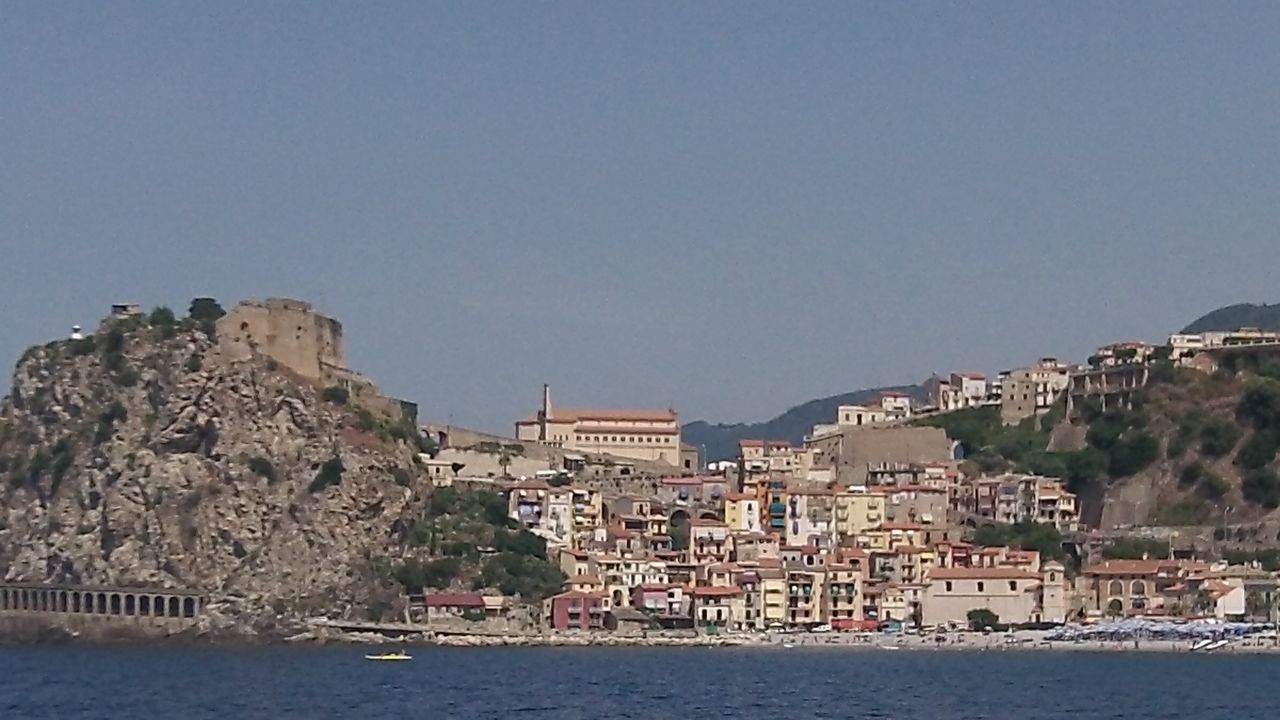 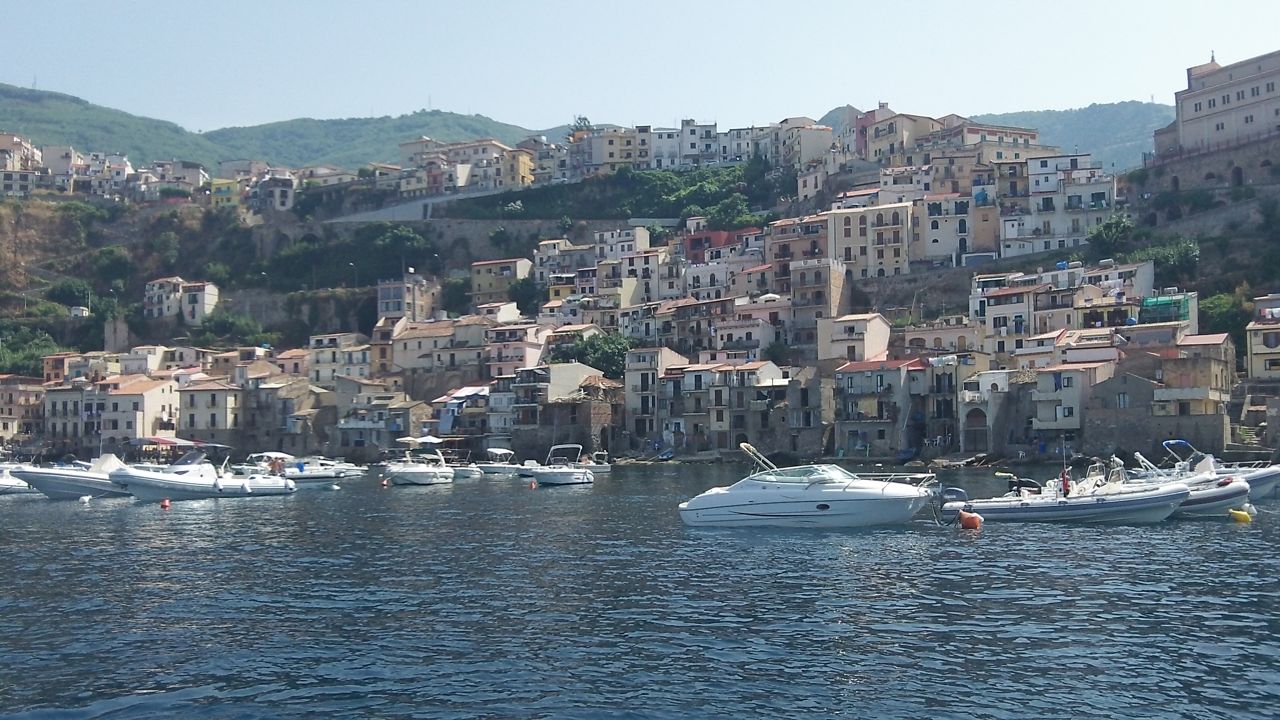 We spent the night at the city of Milazzo, anchored in small area between ferry quay and a oil refinery. The water was dirty, there was a smell of burnt oil in the air, ferries were coming and going till deep in the nigh, making uncomfortable swells, so it was not most pleasant night. In the morning we decided to escape towards Eolian island right away.
Firs island we visited was Volcano. And it has the right to have it's name - there are rocks, yellow from sulphur everywhere (and the smell of rotten eggs is also there), on the beach there is black lava sand and there is smoke coming from the top and the side of the hill above the anchorage. 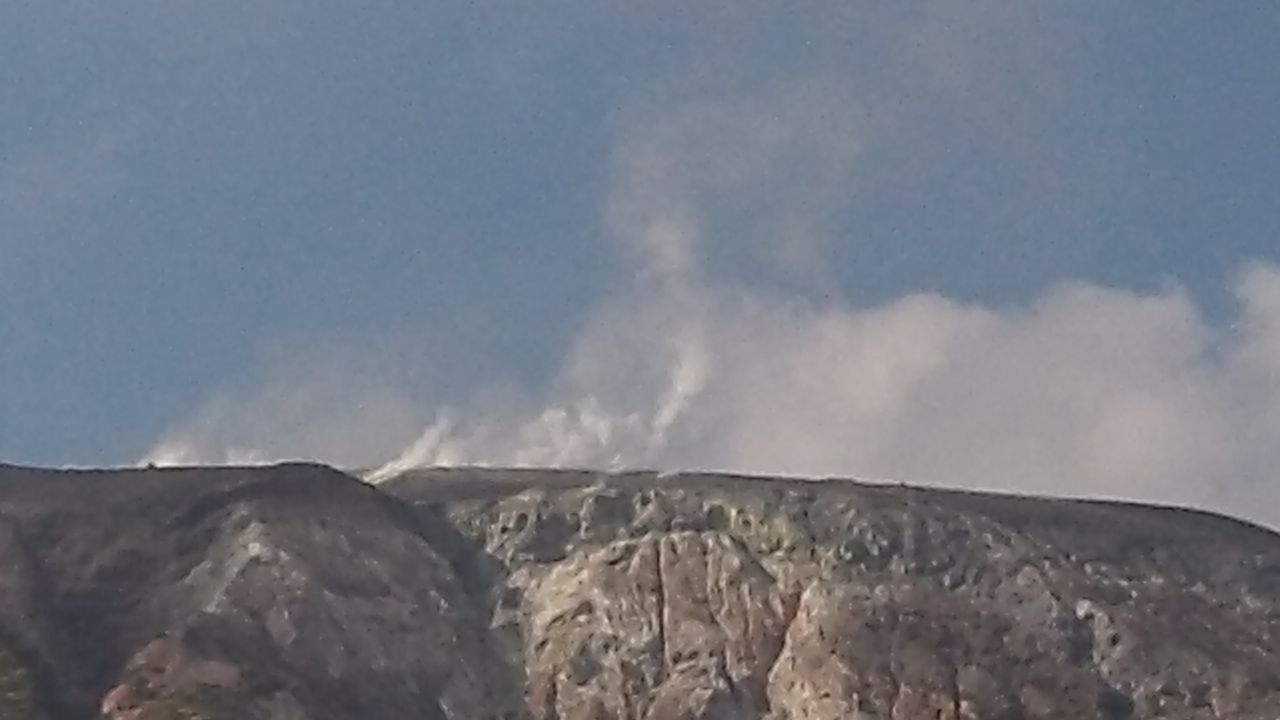 The anchorage was very small - or at least the part of it, that was shallower than 20 m so boats could anchor. This produced some kind of "traffic jam", boats were anchored very close to another (cca 20 m apart), so it was quite fortunate, there were no bumping or accidents.
Little town, that we visited, was built for tourists and has no architectural beauty, but there is a very good store, so we renewed our stocks, especially from the deli department - Italians are artists when it comes to food ...
The bay was very dirty, don't know how all that rubbish got in the water, it looked like some big ships would dump their toilettes and dumpsters directly in front of the island. Next to the anchorage there was a bathing area, people (mostly Italian tourists) were bathing, not minding the smell and the "floating objects". We were rather taking the shower on the boat to cool down and i was thinking of all that lovely clean blue water of Greek Ionian islands ..... 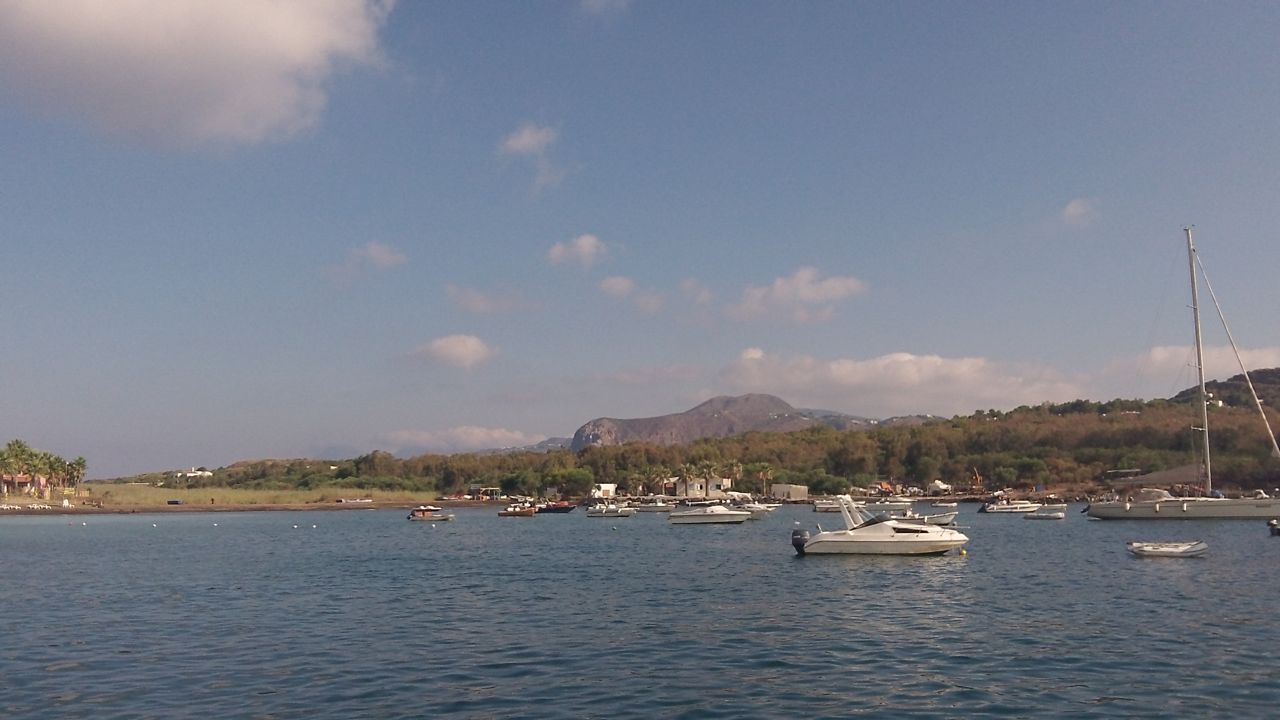