Oh my. This must be the longest break in our blog until now. I'll try to make it up in next couple of posts with lots of photos.

This year's sailing season started much later than usual. Our lives got more complicated and busy over the winter and on top of things Captain had a meniscus surgery at the end of April. So it wasn't until end of June before we even started to think about sailing.

We decided to spend most of the summer in Dalmatia. Captain left Krk and sailed South already at the beginning of July and I joined him later that month in Tribunj, small town near Šibenik. We also had some friends aboard.

Let me first say that Dalmatia is really beautiful, thousands of small islands with abundance of anchorages and clear emerald sea, true paradise for sailing. And for snorkelling as well. Ok, it takes a bit of planning to find an anchorage where there isn't already 500 anchored boats, where you can anchor without paying for anchoring or for the obligatory mooring buoy, and where you're not too close to the route of the big ships that would produce a huge swell every 15 minutes. Luckily our friends wanted a quieter holiday as well, so we focused on bays without a town or village or even restaurant, and managed to mostly stay away from the crowd. We had a rough idea to sail South to Pelješac peninsula and back to Tribunj in 10 days.

We spent first night in Uvala Zaražanj on island Zmajan. It is a very pretty place and while there were many small motor boats in the bay during the day, only two more boats stayed for the night. Next day we sailed South and made a stop in town of Primošten. We had three teenagers on board and you can't just sail all day without making a stop for an ice cream or at least towing them behind the boat on a rope with a fender, and we did both. That night we made it to Uvala Mala Rina on island Drvenik Mali. Not the prettiest bay or the best anchorage, but it was already late and we had enough sailing for that day.

Next day we started early and sailed to Uvala Krknjaši on Drvenik Veli. This is a really pretty place with almost tropical feel to it, unfortunately lots of boaters like it as well. We had a big late breakfast and did some swimming there. When the anchorage got too crowded we sailed on towards Šolta, the plan was to just sail on the SW side of the island until we find a pretty bay to anchor for the night. But once we reached NW tip of the island, wind was almost from E and we realised it would be much easier to sail to island Hvar than to tack (zig-zag) along the Šolta. So we set sails for Hvar, sailed by the town of Hvar and then meandered through really big boats to Pakleni otoci and anchored in Uvala Taršče on Sveti Klement. We were surprised to have found only a few boats anchored in such a pretty bay.

The crew went for a swim in lovely warm blue-green sea, and I just had to go snorkelling. It was already my third day on the boat and I haven't done any snorkelling yet. I snorkelled in this bay already couple of years back, so I knew what to expect. One of the prettiest things I saw was a Cardinal fish or Morski kraljiček (Apogon imberbis), it is just of such a pretty colour. And it reminds me of Caribbean, I've seen Cardinal fish there very often. 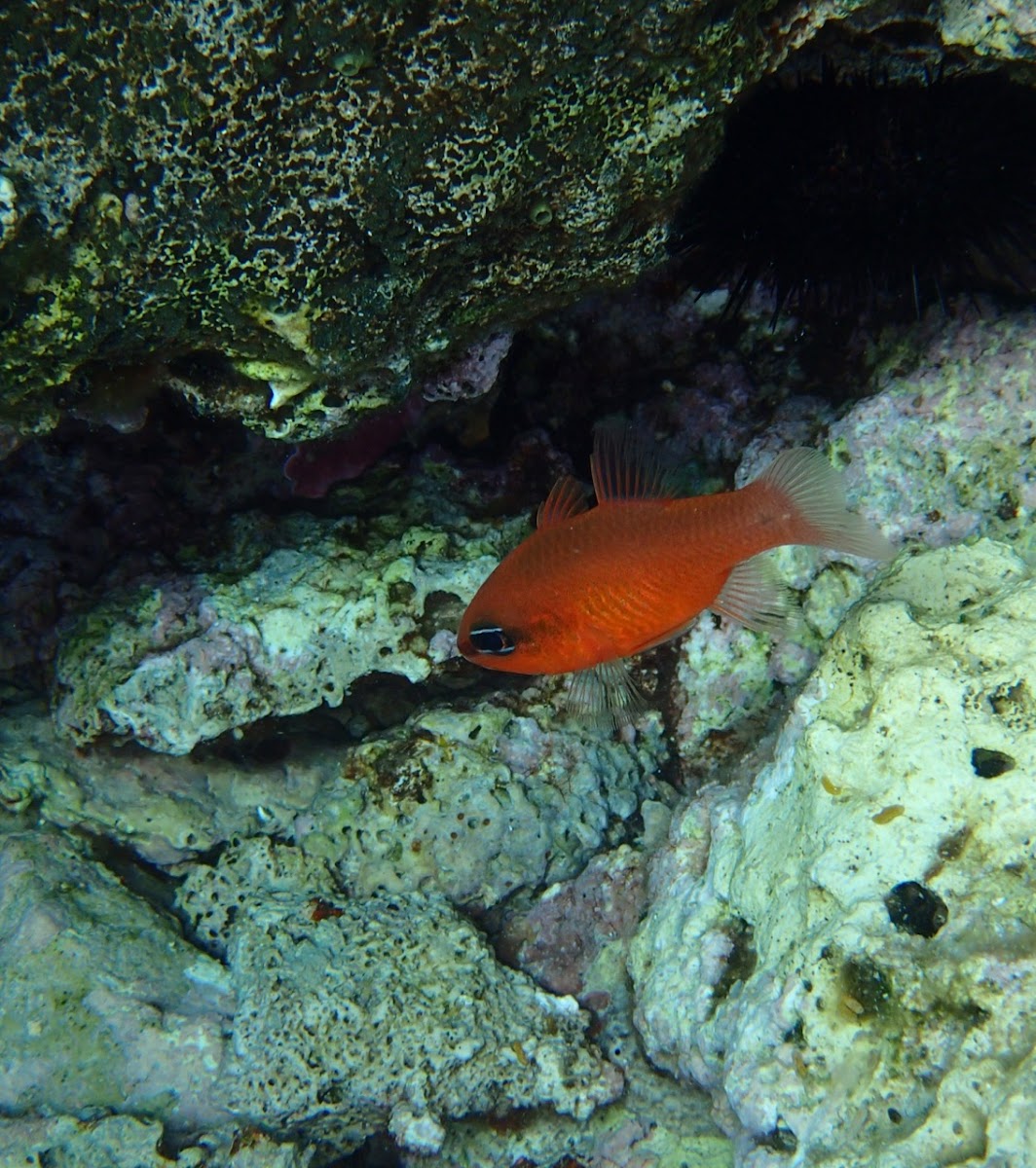 The brown sponge next to Orange encrusting sponge is Krompirjasta spužva or Chicken liver sponge (Chondrilla nucula), the thing that looks like a pendulum is how it does asexual reproduction. 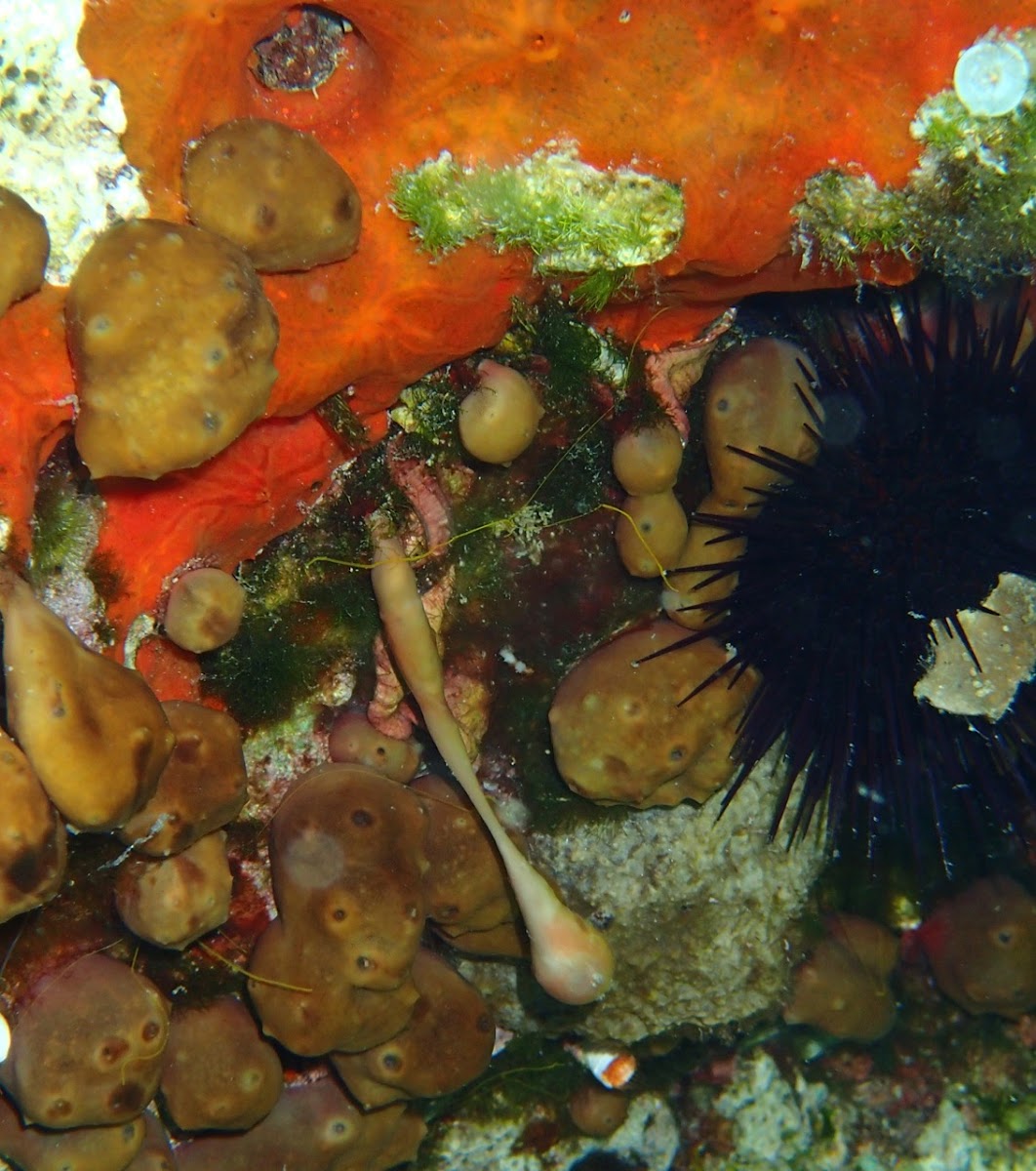 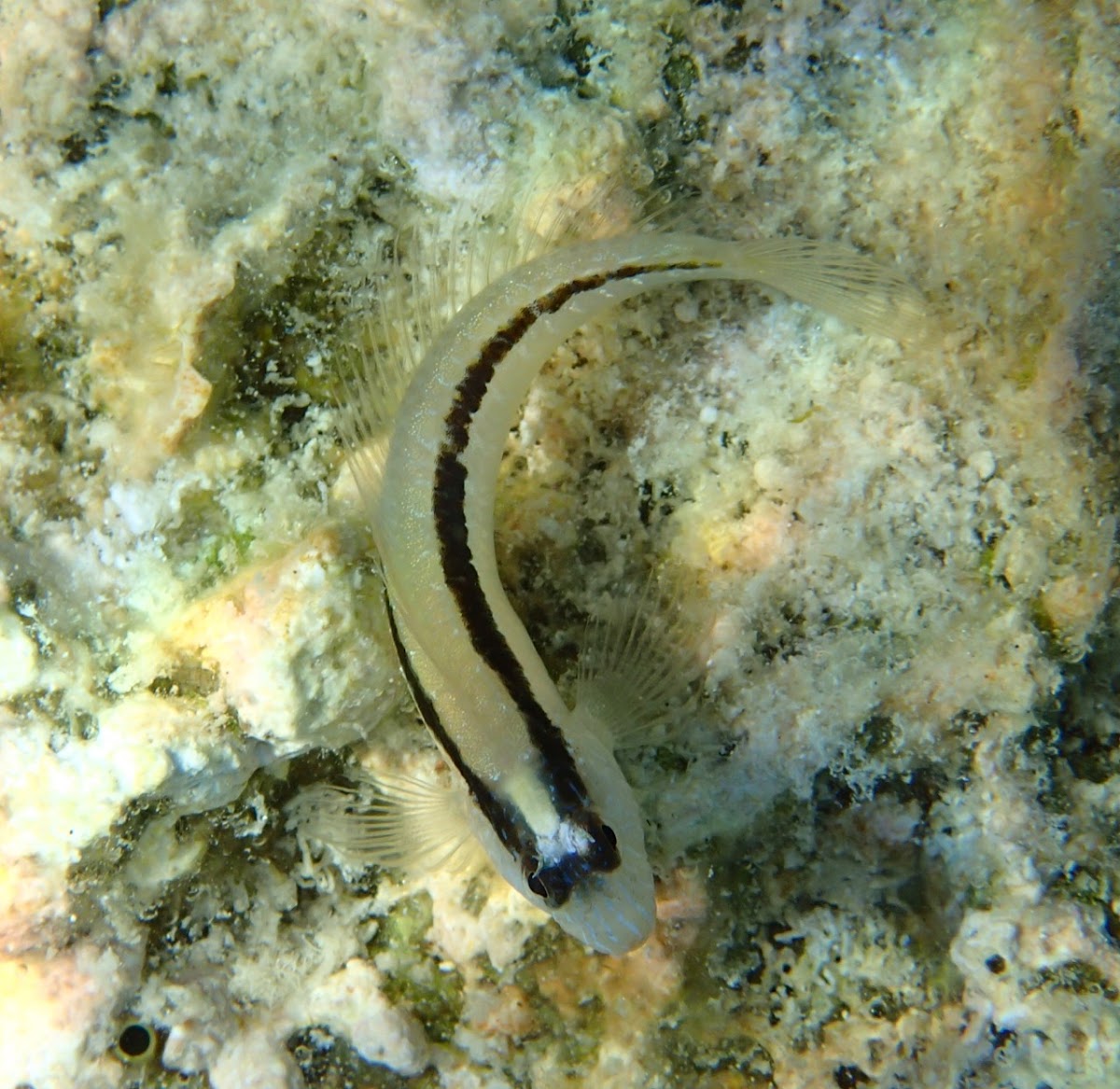 After swimming we changed plans again - while we were actually going to cook dinner on boat that night, we decided it would be a waste to not visit Dionis reasturant, since we were already so close. And a short walk over the island would do us good. We were glad we decided this way - the walk was pleasant, scenery beautiful, and the food fantastic. I'm so glad Dionis manages to maintain the high quality of food even in high season and so it remains one of my favourite restaurants in Adriatc.

The weather started turning already after we returned to the boat, the wind got stronger and stronger, changed the direction to  SW and unpleasant waves were getting into the bay. So in the morning we sailed off even before breakfast. First two hours were wild and bumpy, but then the weather started to calm down a little and in early afternoon we found shelter in Uvala Porat on island Ščedro. What a contrast to bumpy sailing in an almost cold breeze! After a big brunch we all enjoyed the sun and clear warm see. 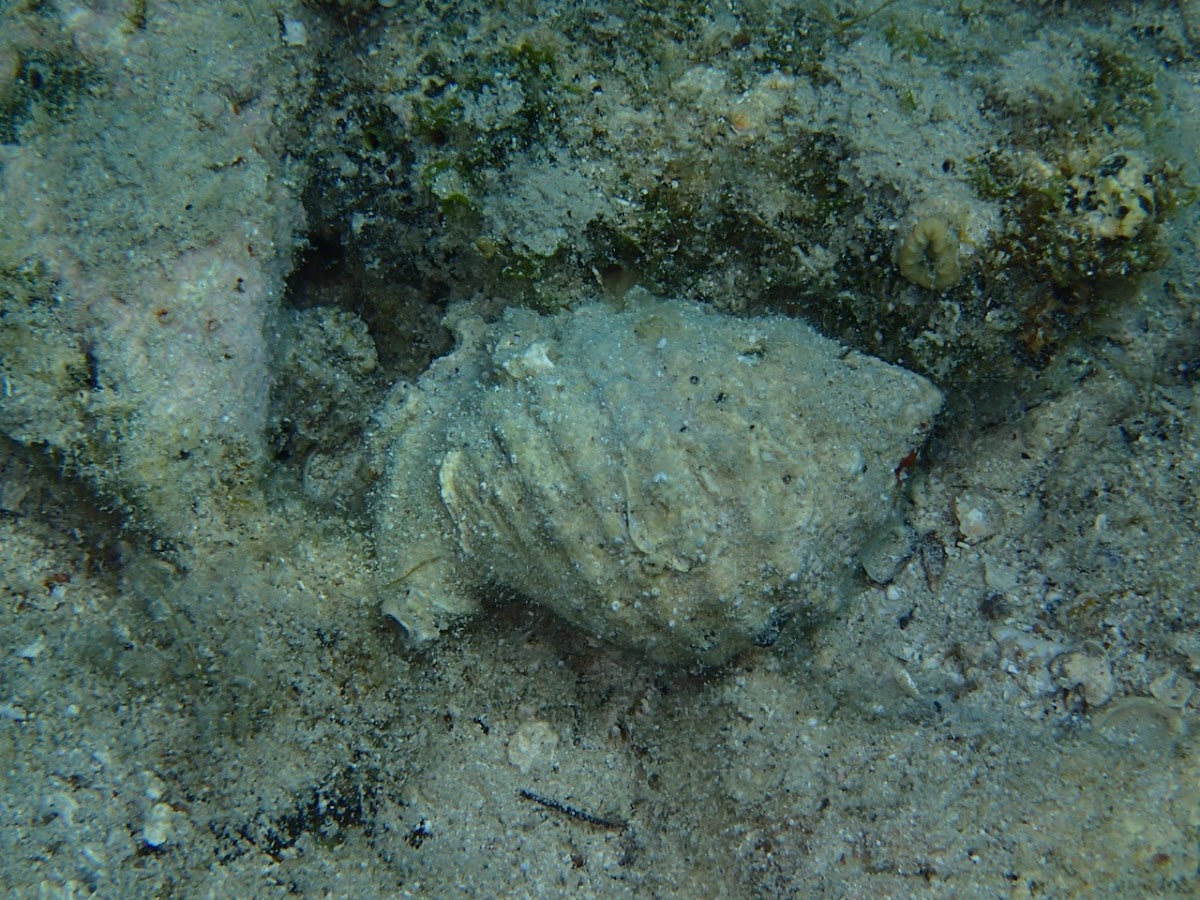 I also met this poor guy - it is Jelenoroga babica or Zvonimir's blenny (Parablennius zvonimiri) with Ribja uš or Parasitic Isopode (Anilocra physodes). You can see the structure of the eyes of the parasite and the hooks with which it is attached to the fish This pretty blenny is Jelenka or The mistery blenny (Parablennius incognitus). I'm still wondering what the black oval thing with white rim and three white dots left below the fish might be, it is too symmetrical to be a rock or a piece of algae. But I wasn't able to find any shell or snail  that would look like that. 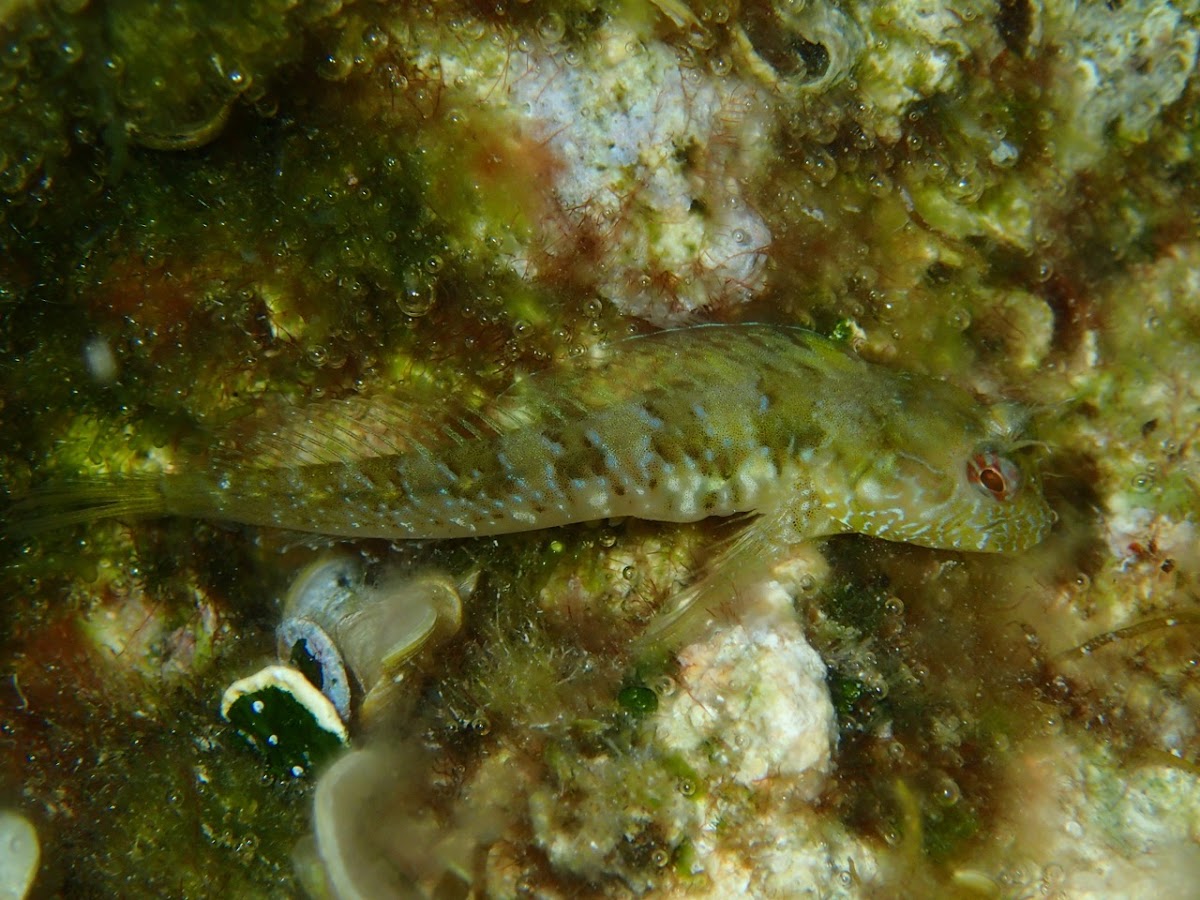 I know I posted a lot of photos of Pisani pokrovčkar or Red tube worm (Serpula vermicularis) already in previous posts, but this one is again so pretty. 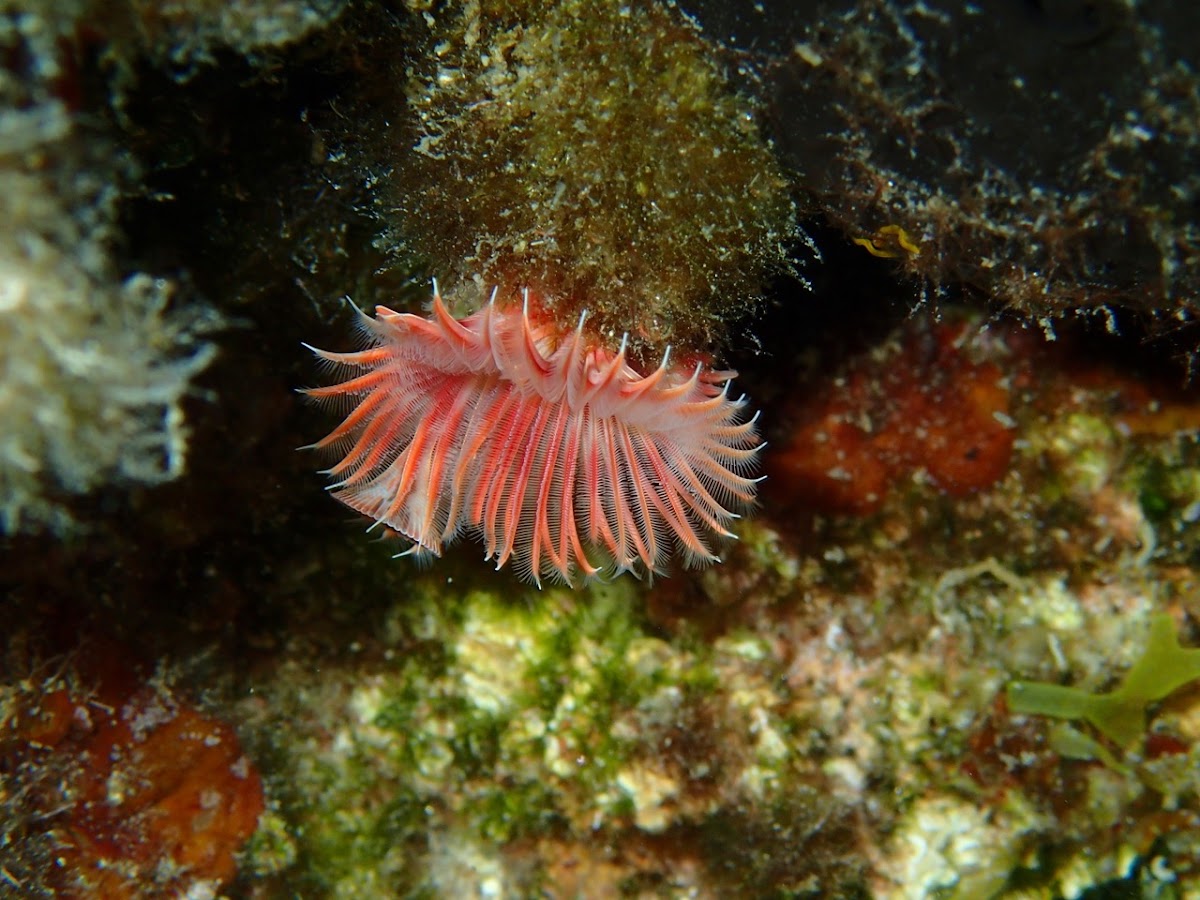 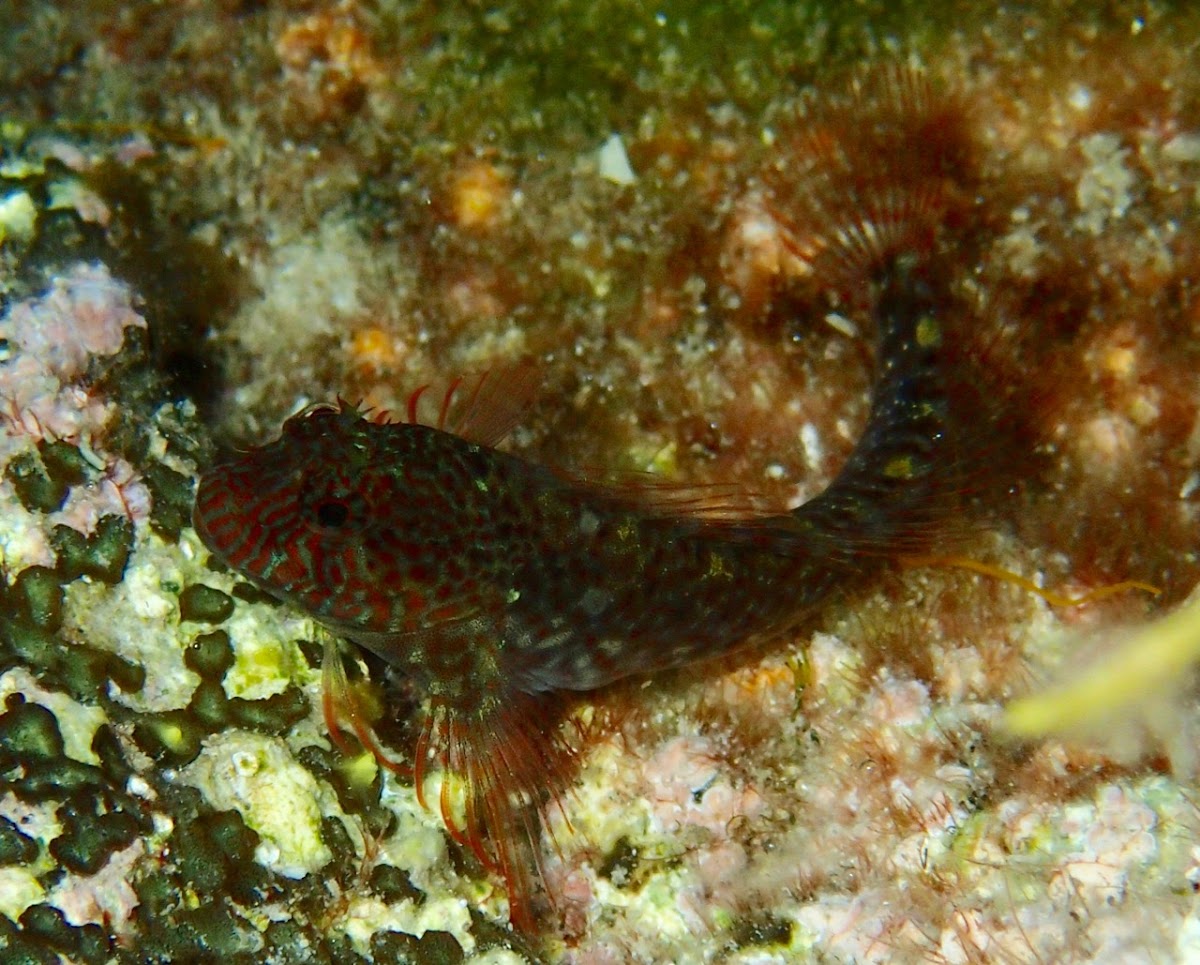 Later that afternoon we sailed off and in the evening anchored in a bay near Kučište on Pelješac peninsula. After some swimming and a delicious dinner we had a long and peaceful night.

Next morning we took a closer look at town of Korčula. 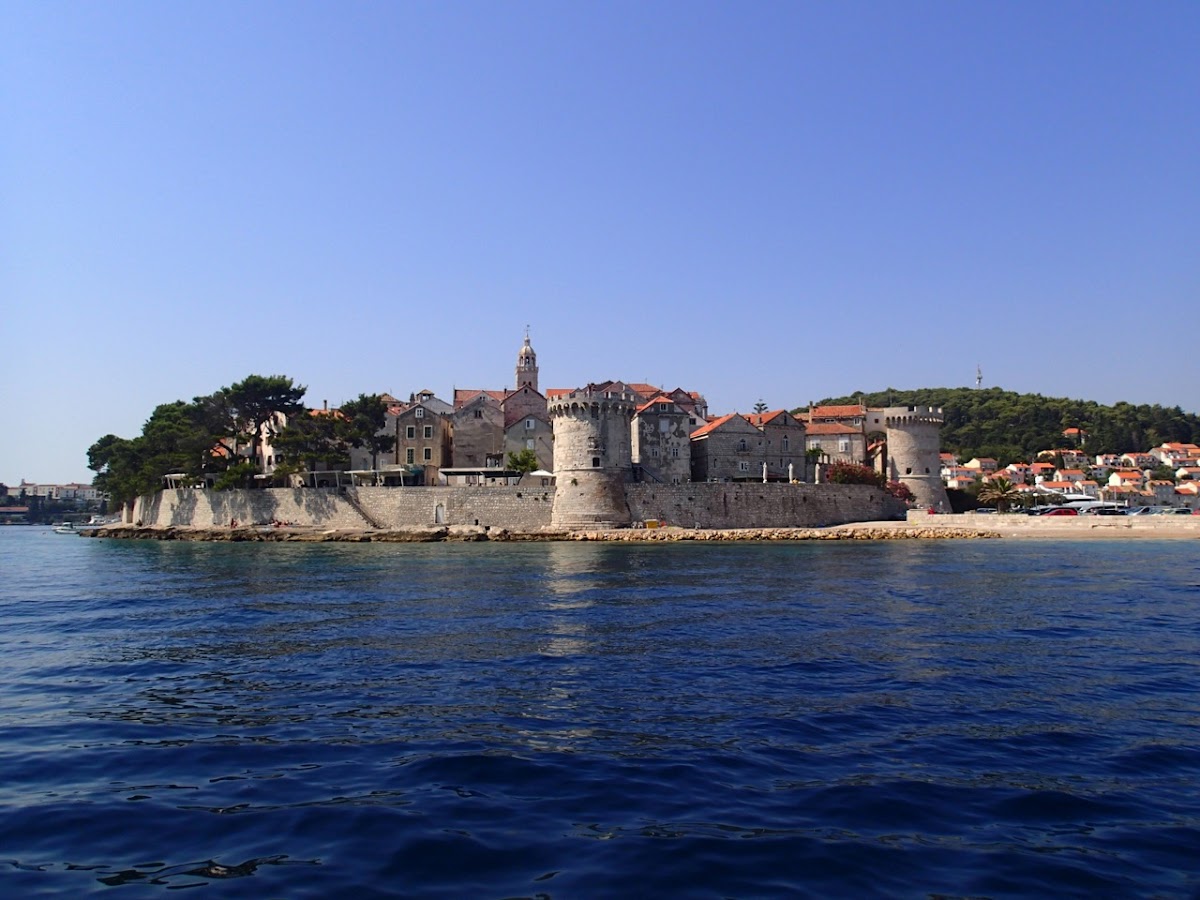 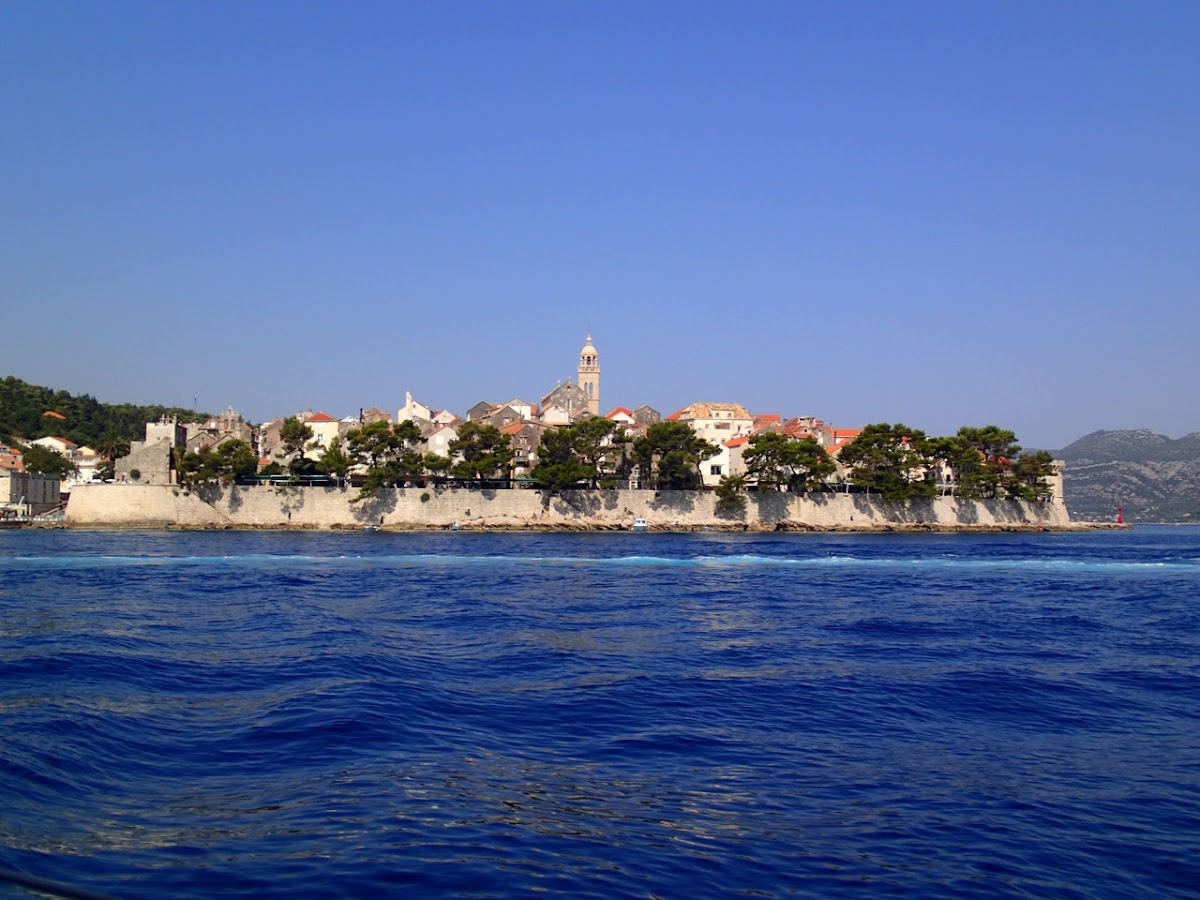 Then we sailed along Pelješac peninsula to the town of Orebič. 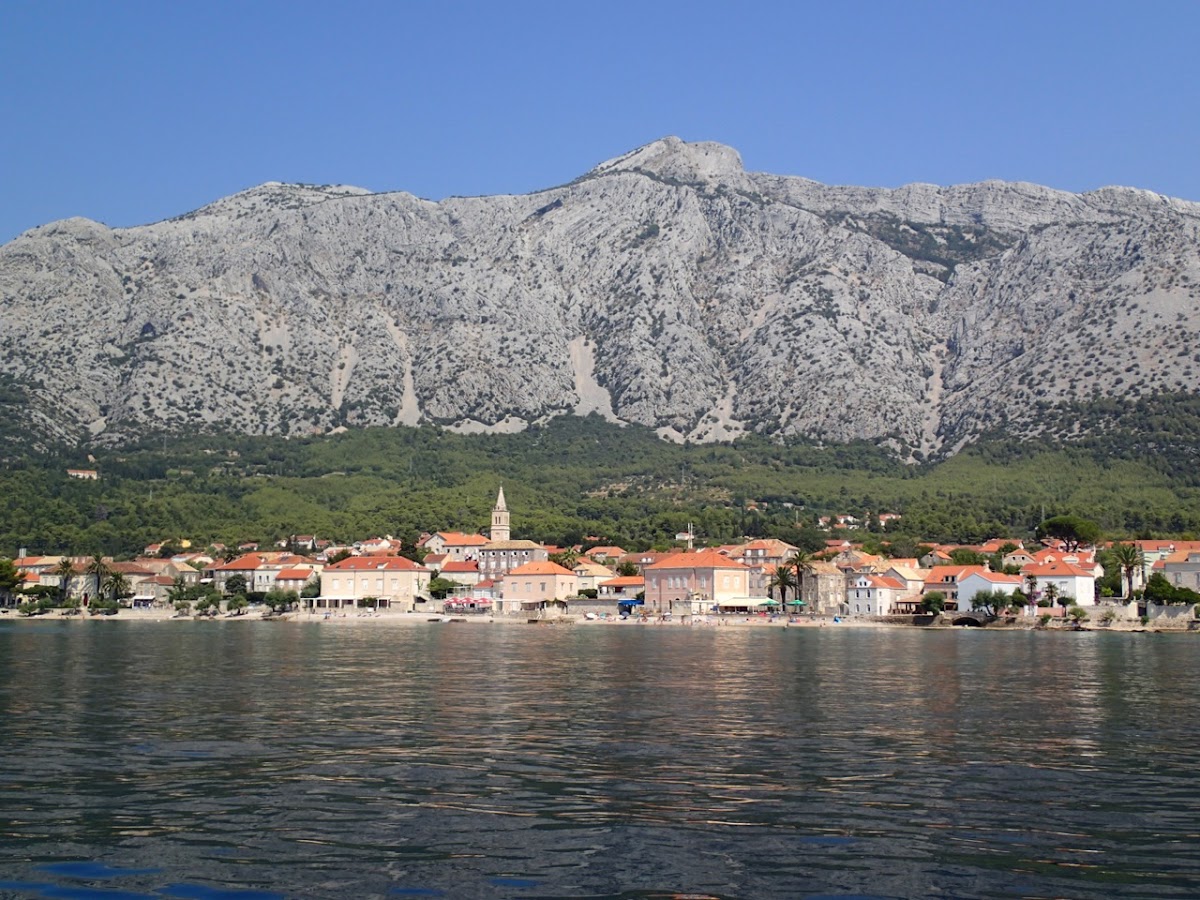 We anchored near the island Majsan for a break and some swimming. And I did some snorkelling. I met this pair of Fratrc or Two-banded seabreams (Diplodus vulgaris). 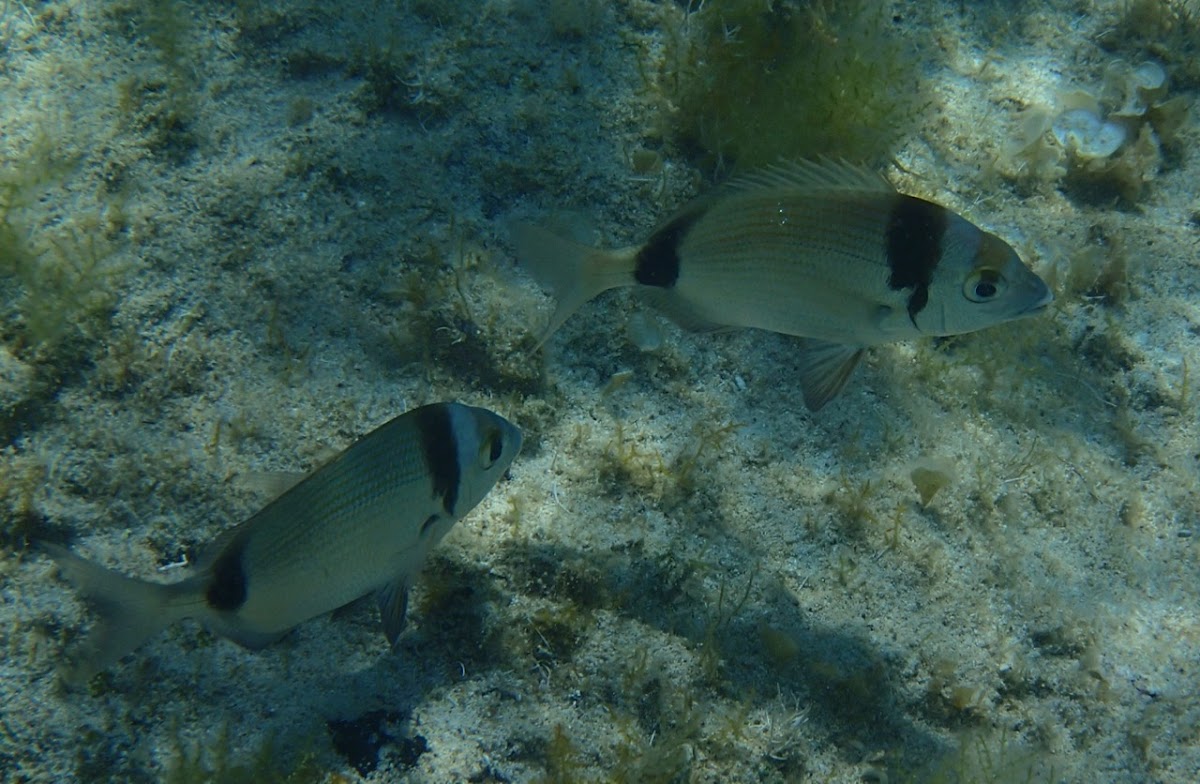 This is a particularly "blond" Skalni glavač or Giant goby (Gobius cobitis). 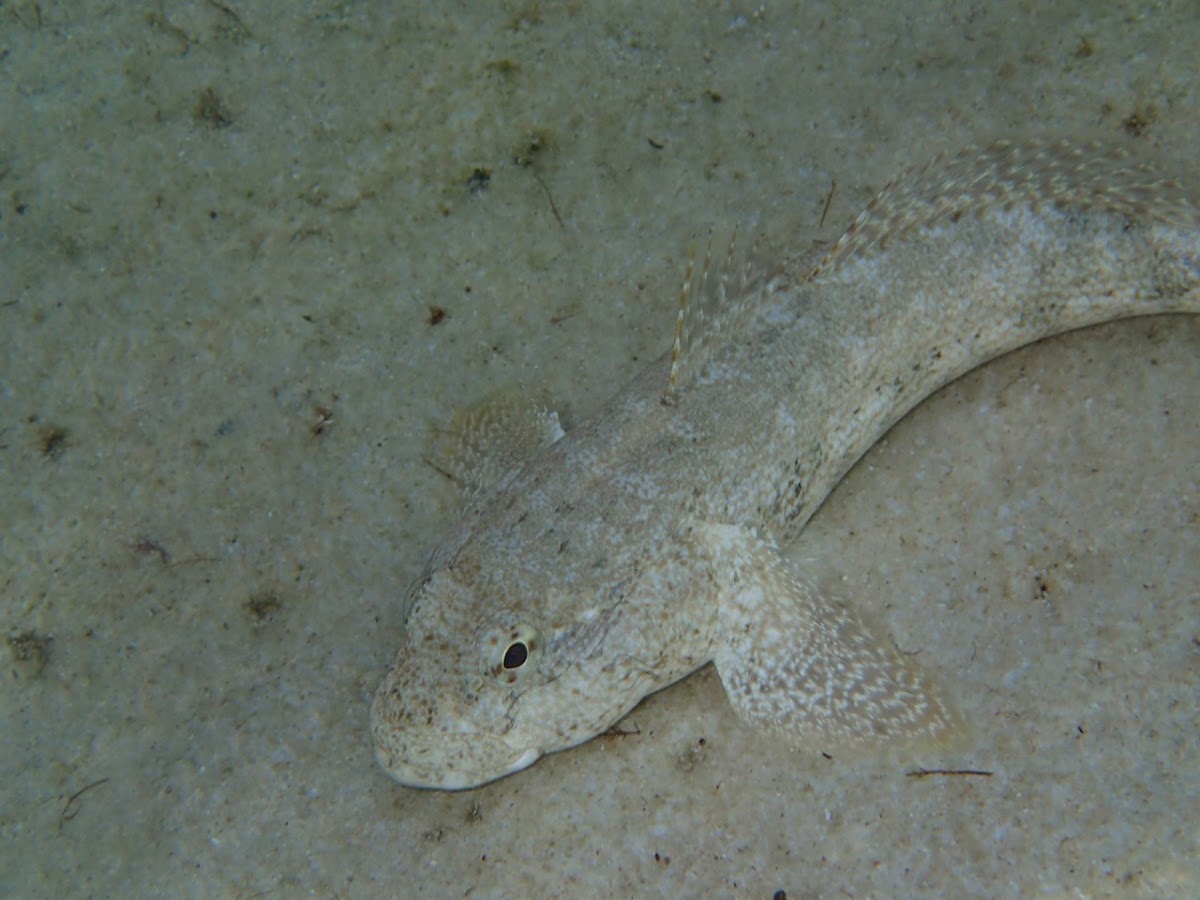 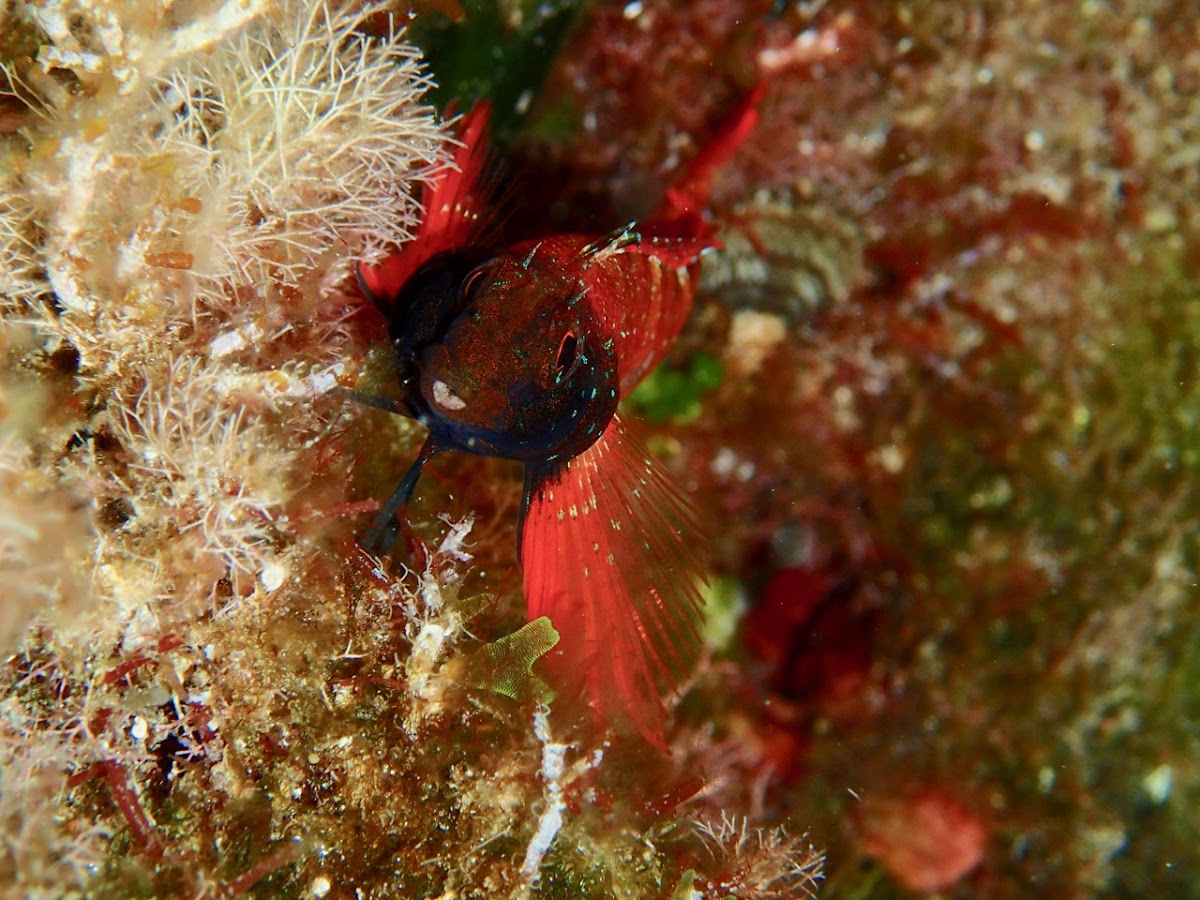 Already the scenery, even without fish, was pretty and colourful. 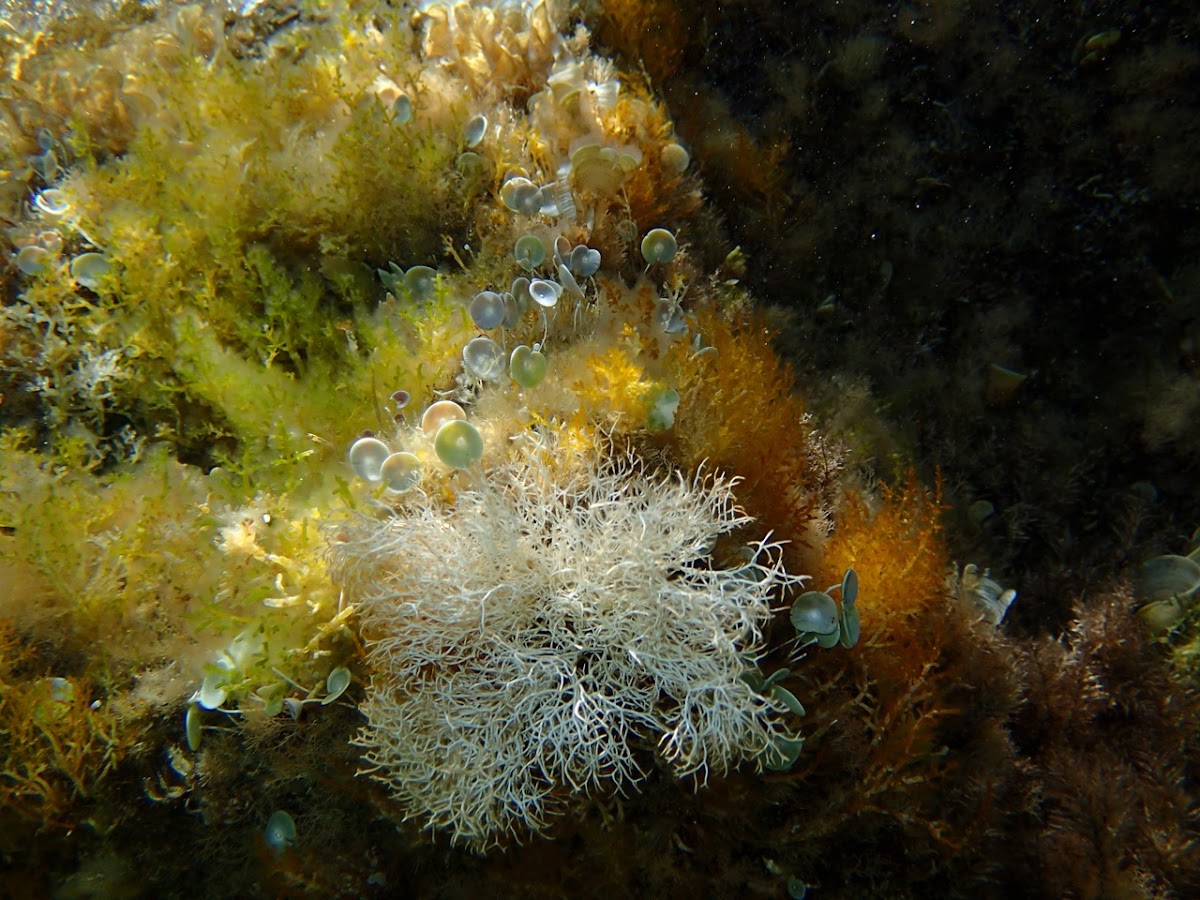 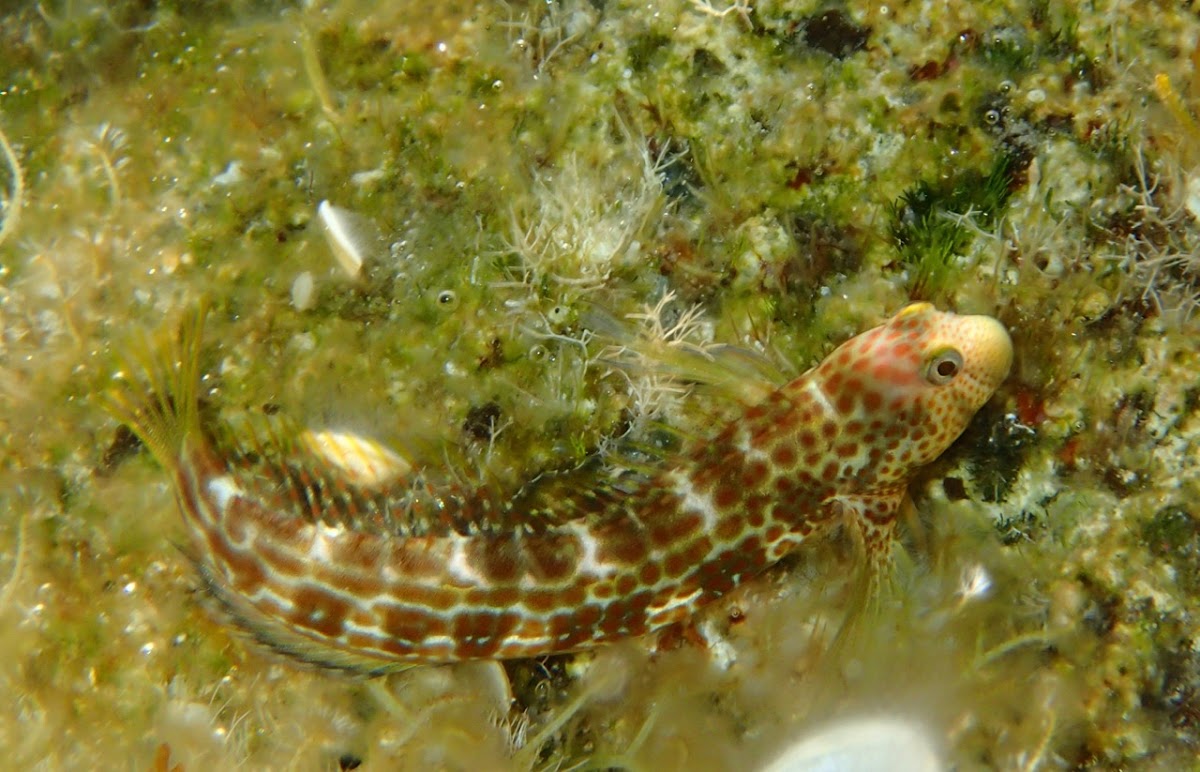 If it wasn't for the sea grass, this Morski jezik or Flounder (Arnoglossus) would remain invisible. 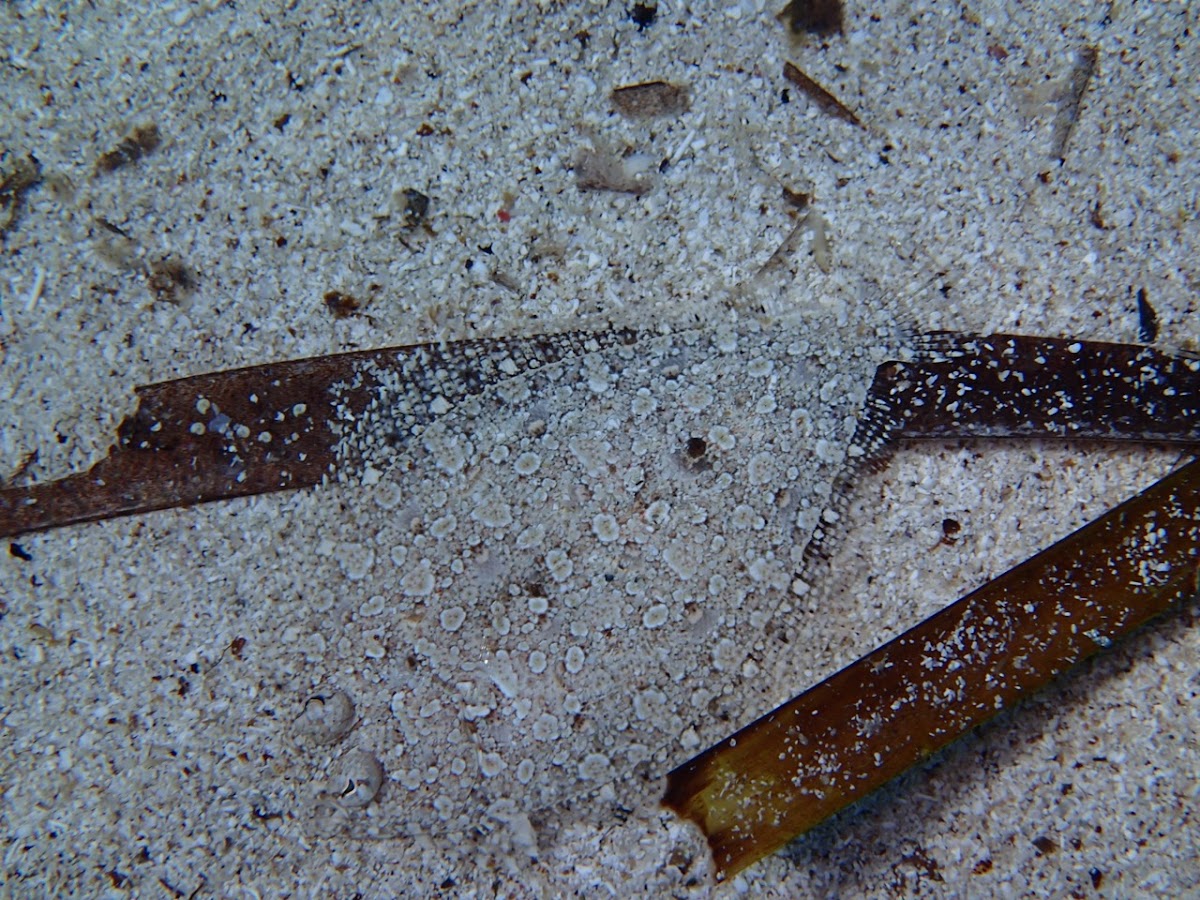 Since we managed to sail this far in only couple of days, our ambitions grew bigger and instead of turning back we decided to sail to Lastovo next. On the way we stopped for a short swim at one of the small islands called Lastovnjaci, and in late afternoon anchored in Skrivena luka in Lastovo where we stayed for the night.

Next morning we moved to a bay just around the corner called Uvala Uska. After a big breakfast it was time for swimming for everybody and for snorkelling for me.

I found my first octopus this year. I hope I don't sound like a broken record, but I really see less and less of them every year. And the ones I see are smaller than what I was seeing some years ago. I hope that more of them survive in deeper water (where it is too deep for me to snorkel), or that they manage to bounce back during winter, but I'm really worried for them. I've seen many boats hunting for them in the late evenings and the spears people use for hunting are getting longer, and more and more locals and boaters do spear fishing. The problem is that they are delicious and although I eat them very rarely, I might have to stop eating them altogether, it could be the only thing I can do to help. 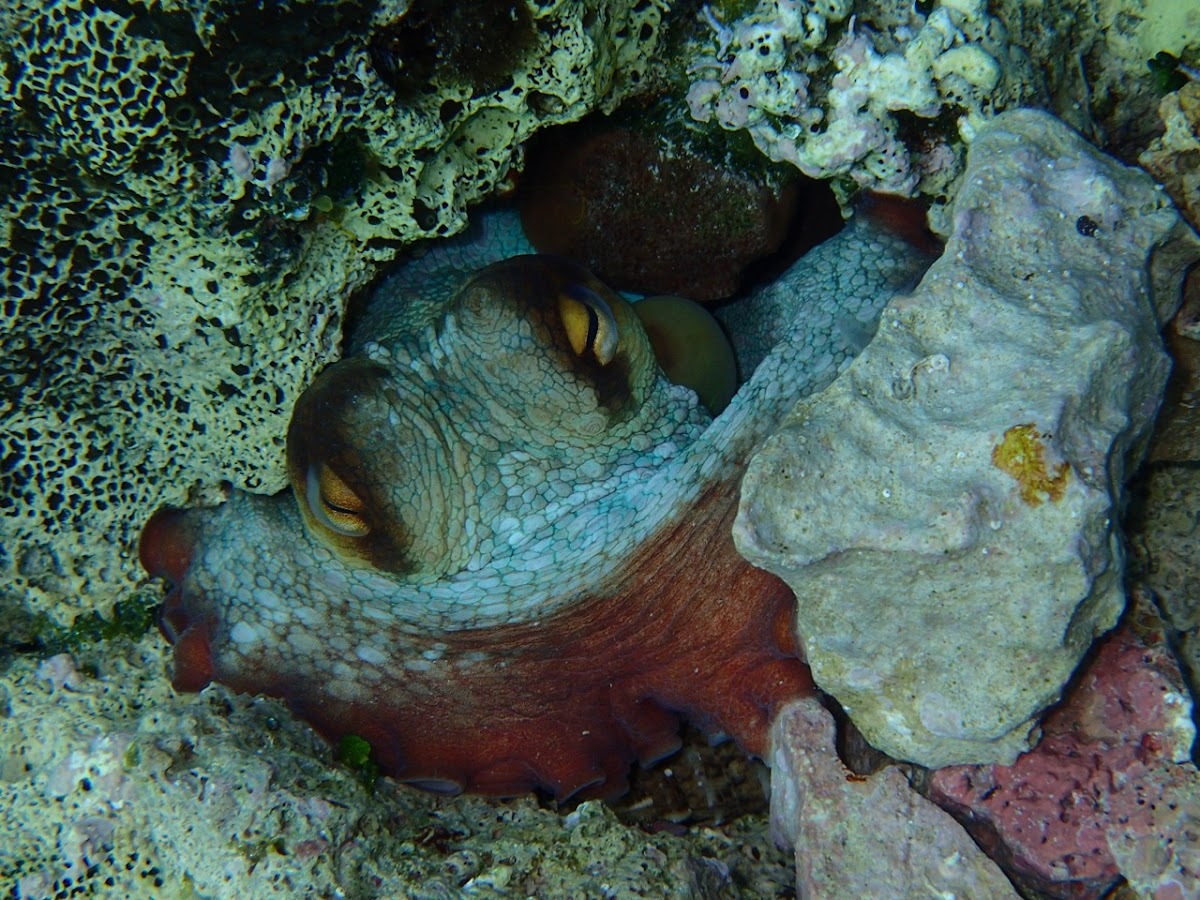 I was so happy when I took the photos of this pretty crab I haven't seen before. I immediately checked all my books to find out his identity, but he was nowhere to be found. Regardless of how much I studied the photos, my books, on-line resources, there was no crab in references that would have little blue horns, gold spots on every joint and wear eyeliner. When I already gave up, I accidentally checked this link  http://www.jasonflower.co.uk/index.php?/category/41  that I bookmarked a few years ago when searching names for the fish I photographed. And there it was, my crab. The only thing that seemed really strange was that it was photographed in Tobago. But at least I had the name - it is a  Nimble spray crab or "Sally Loghtfoot" (Percnon gibbesi). I did some more on-line searching and find out that it is native to both sides of Atlantic and to Pacific coast of North America, and that it is an invasive species in Mediterranean, first recorded in 1999 on Sicily, but already spread to Adriatic in 2014. That explains why it isn't mentioned in resources about Adriatic and Mediterranean. It is not yet known wether it has any negative implication for the native species. But then invasion is almost never good, human, animal or otherwise. It is very pretty though and I hope it is not one of the "really bad guys". 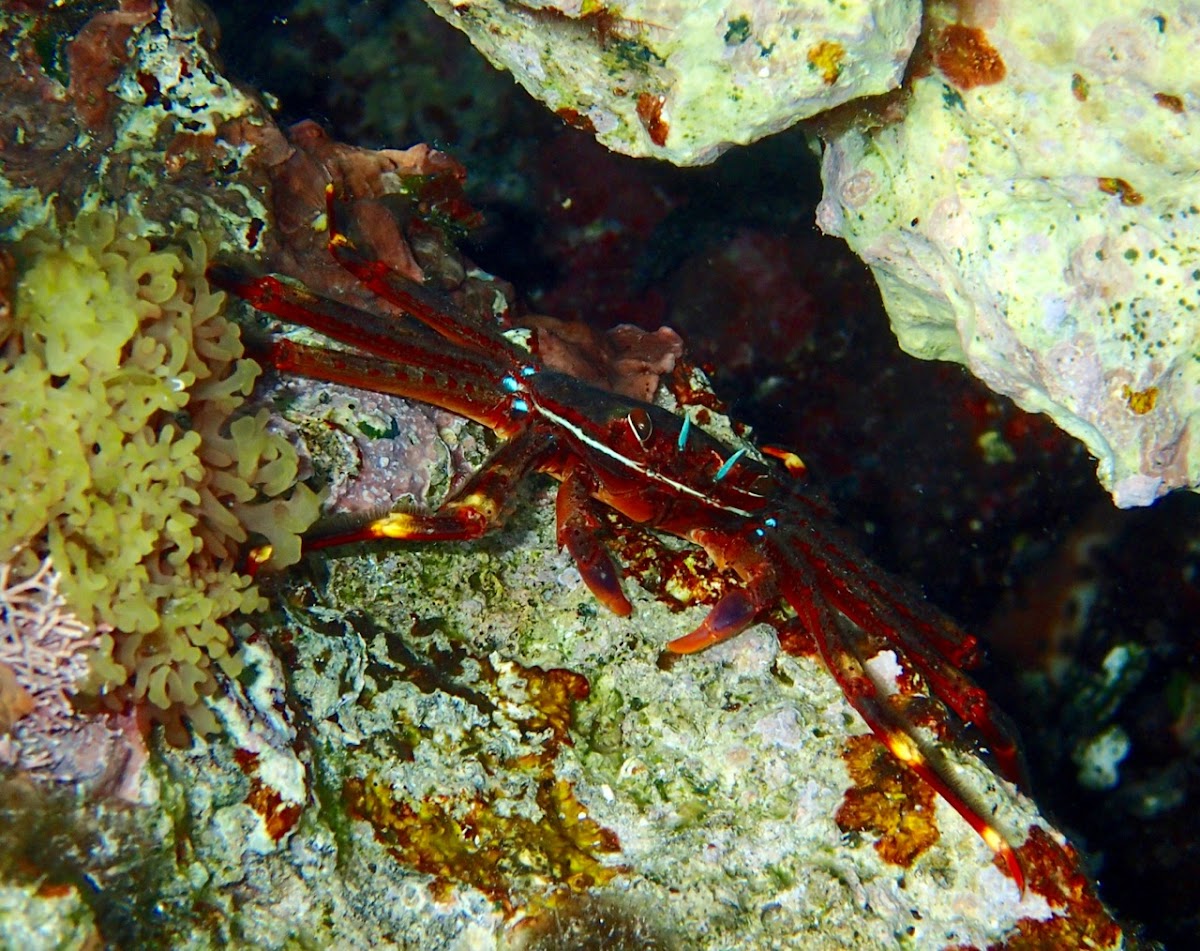