The cold beginning of sailing season

Last week in April is always a good opportunity to go sailing - with two national holidays, it is easy to take few days off of work and have the whole week off. Just the weather is not always that cooperative. This year winter just didn't want to end, and the temperatures of air and sea were quite low. Regardless, we put on brave faces and drove to Krk on Saturday. We were four - Tim and Lucie from France and of course Captain and me. We met Tim in Paris, we flew together to Guadeloupe and later we spent some nice time together - check it here. 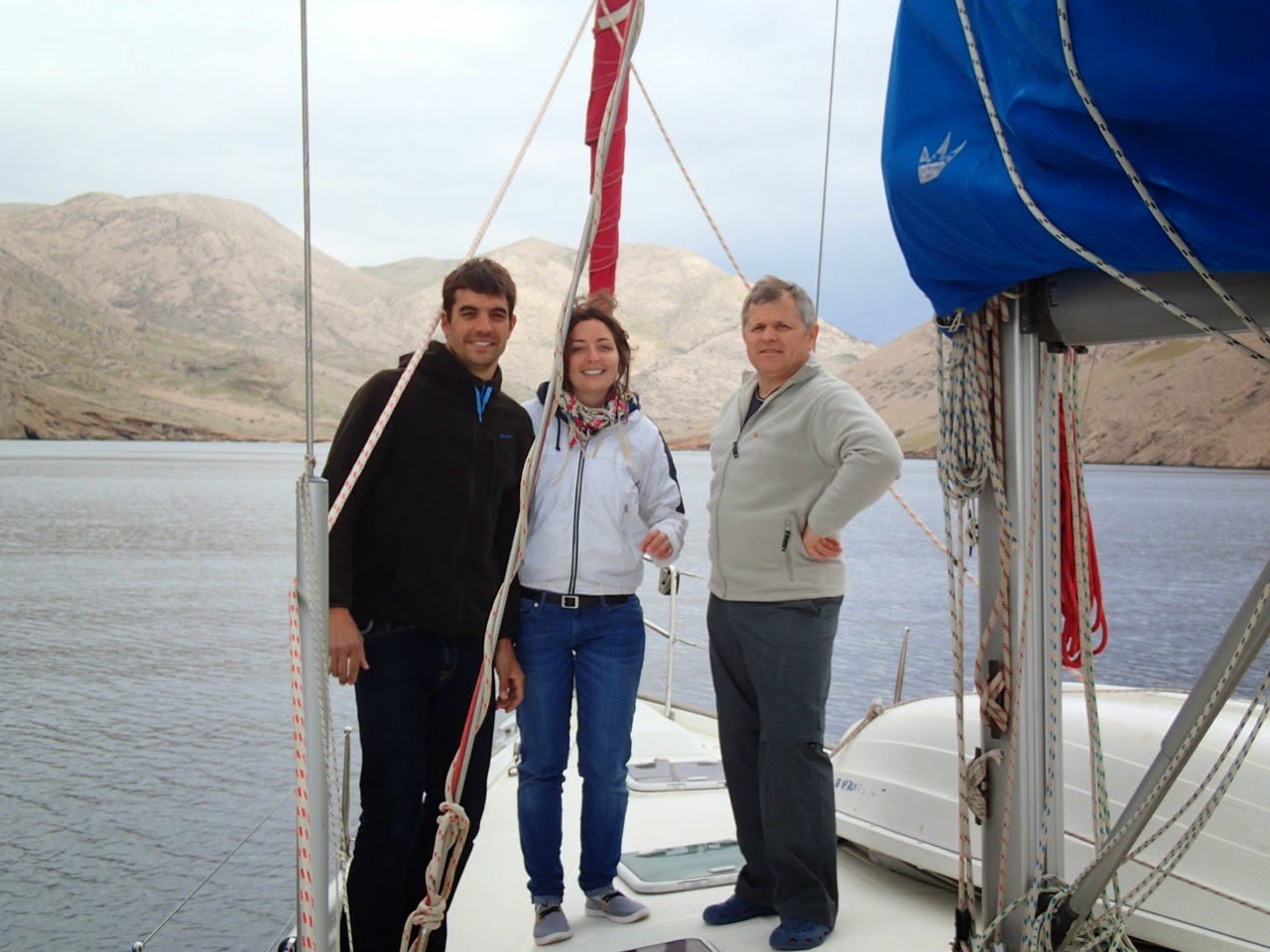 We bought a lot of food already on the way and on Saturday late afternoon we left Klimno and motored to Luka Srščica, where we spent the night. Fortunately we have enough fleece blankets and warm sleeping bags, since the night was quite cold.

Next day we sailed further South and stopped in Vela Luka, still on island Krk. It is a deep, well protected bay (except from South), almost a fjord. 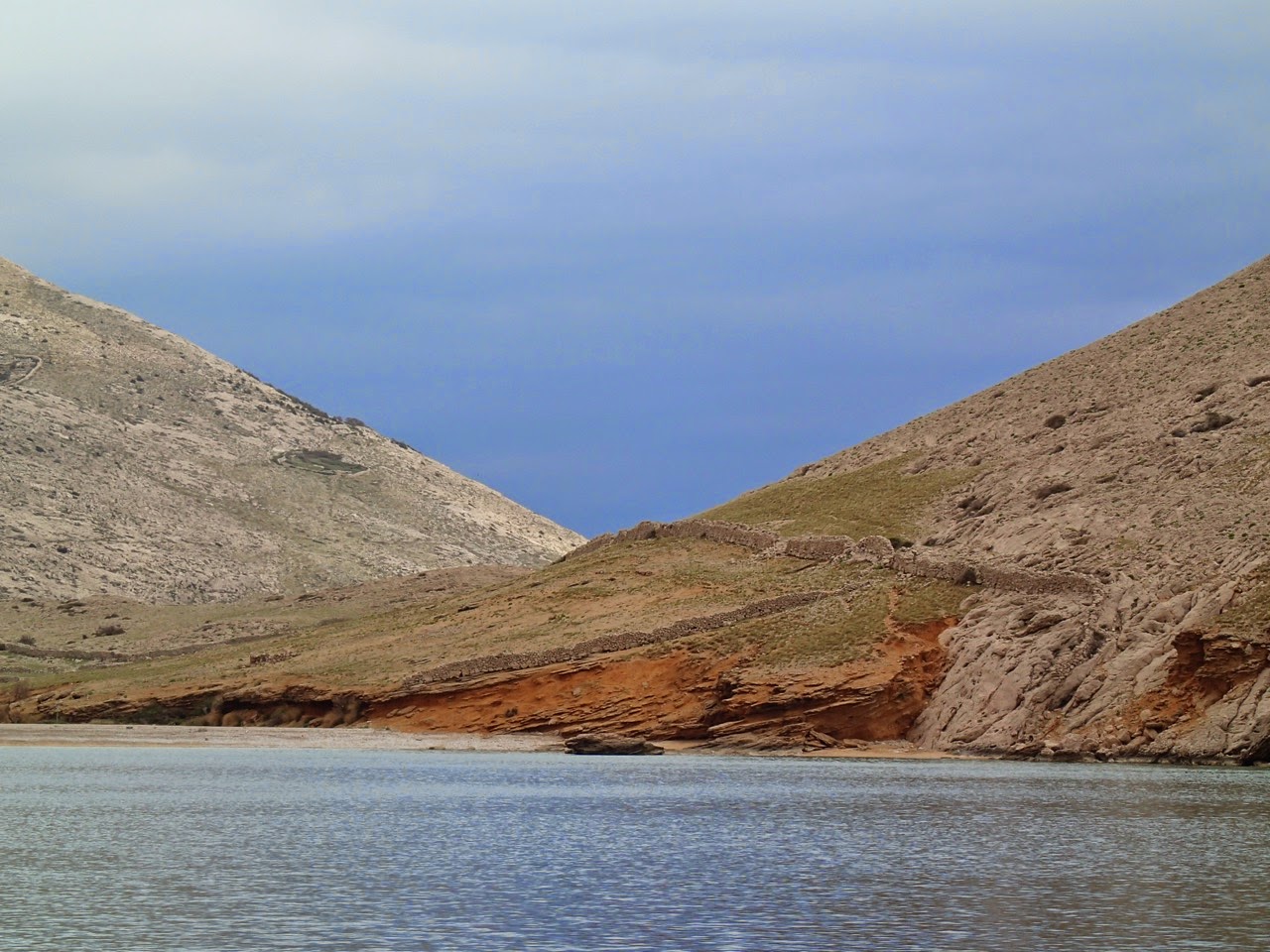 There is a tuna spotting station there, nowadays it is not used any more. In old days there were schools of tuna swimming into the bay, fisherman sitting on the ladder saw them and alarmed the other fishermen, who then closed the bay with their boats and nets and caught them all. These days tuna is very rare in Adria and these kind of events don't happen any more. 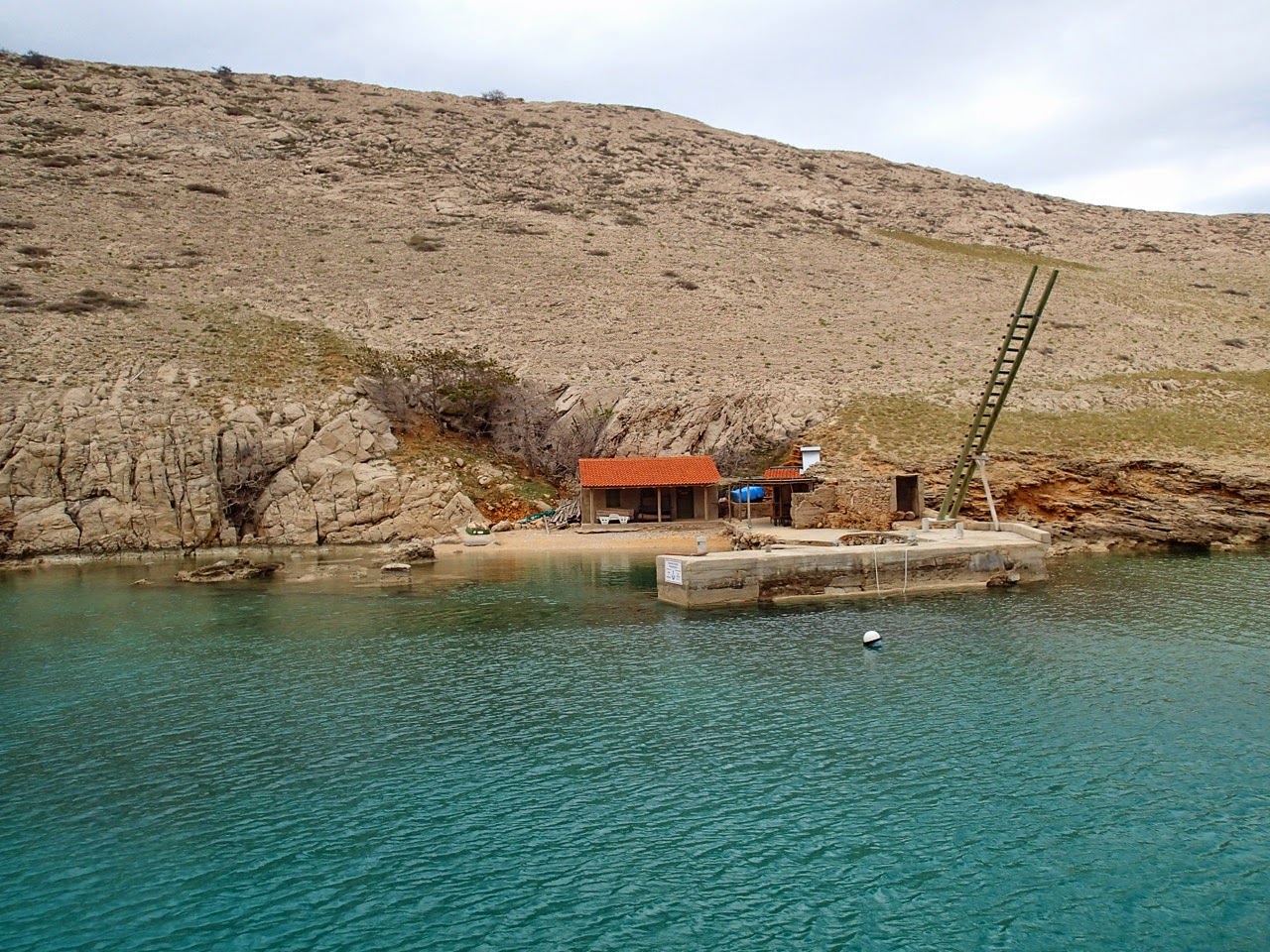 We had nice sailing further South and stopped in Supetarska Draga on island Rab. Area is also called Hawaii because it's so pretty with all the small islands and blue and green water. It also provides very good protection from winds from all sides.

Since this was our first sailing since autumn, we needed to prepare the dinghy. Everybody was helping. 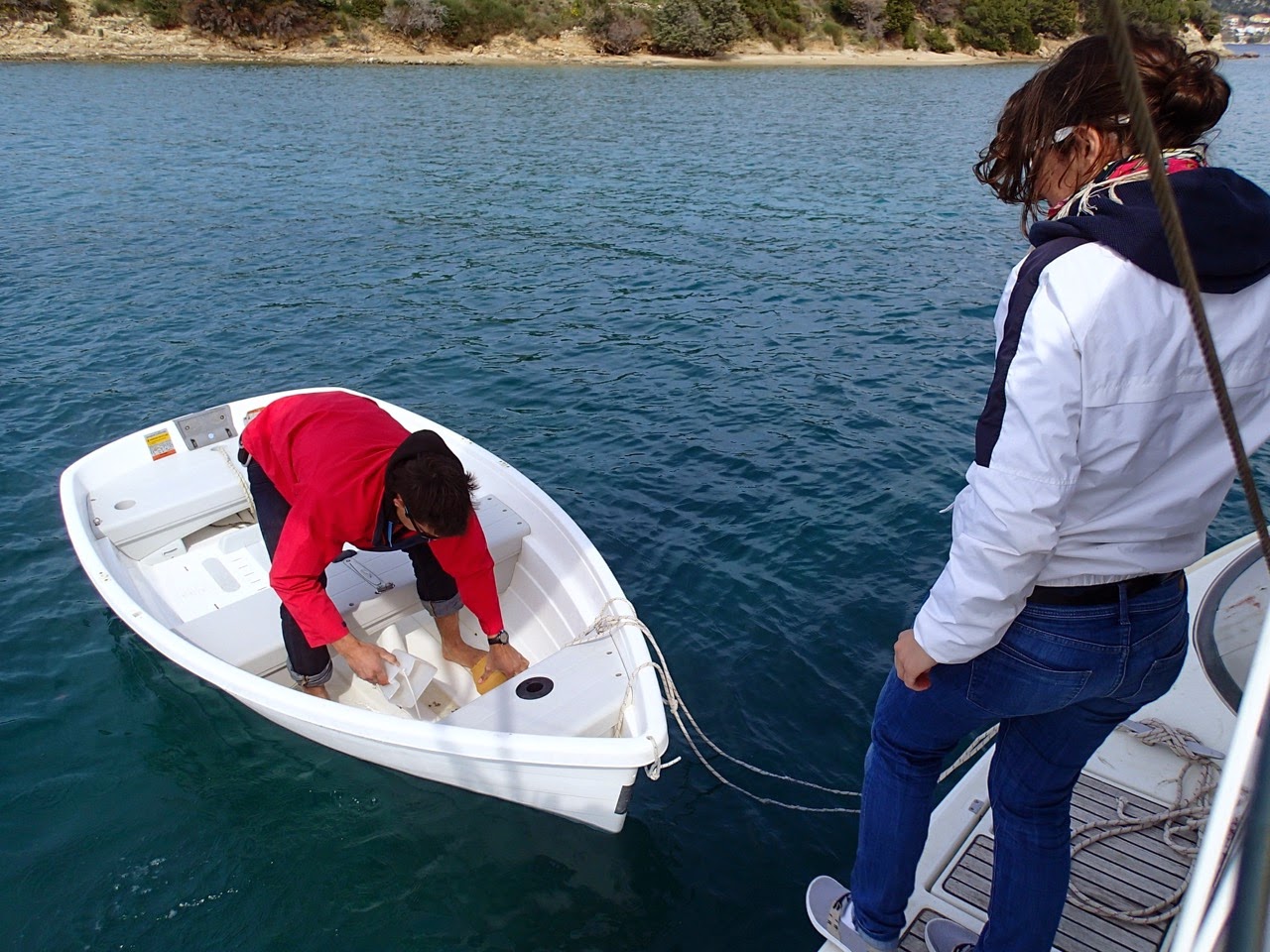 Despite the cold sea (13 deg C), Tim had to check the temperature himself. Or maybe he just needed to bathe after the arduous task of putting the tubes on the dinghy. 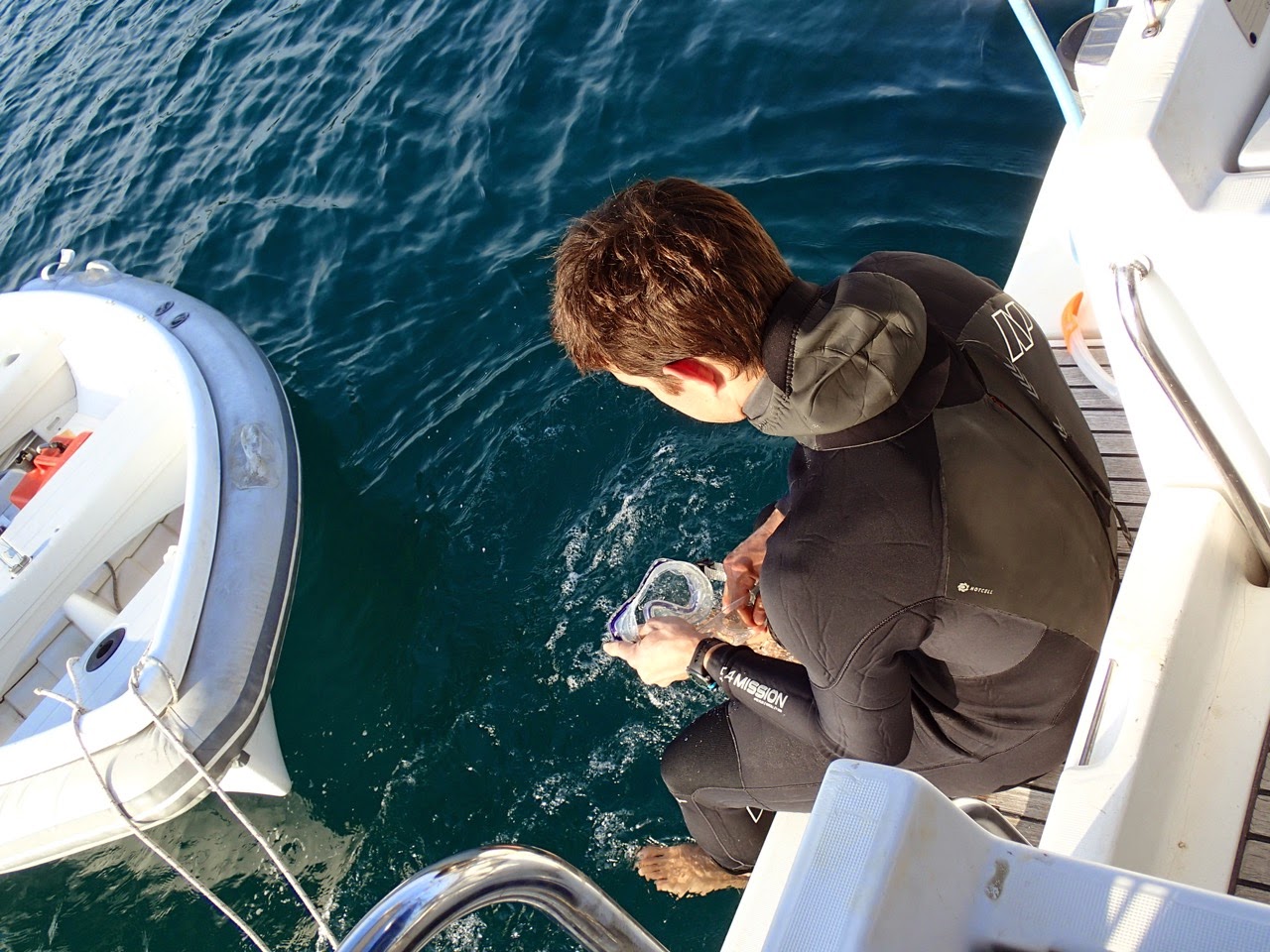 I surely wouldn't look that happy in cold water, even with neoprene suite. 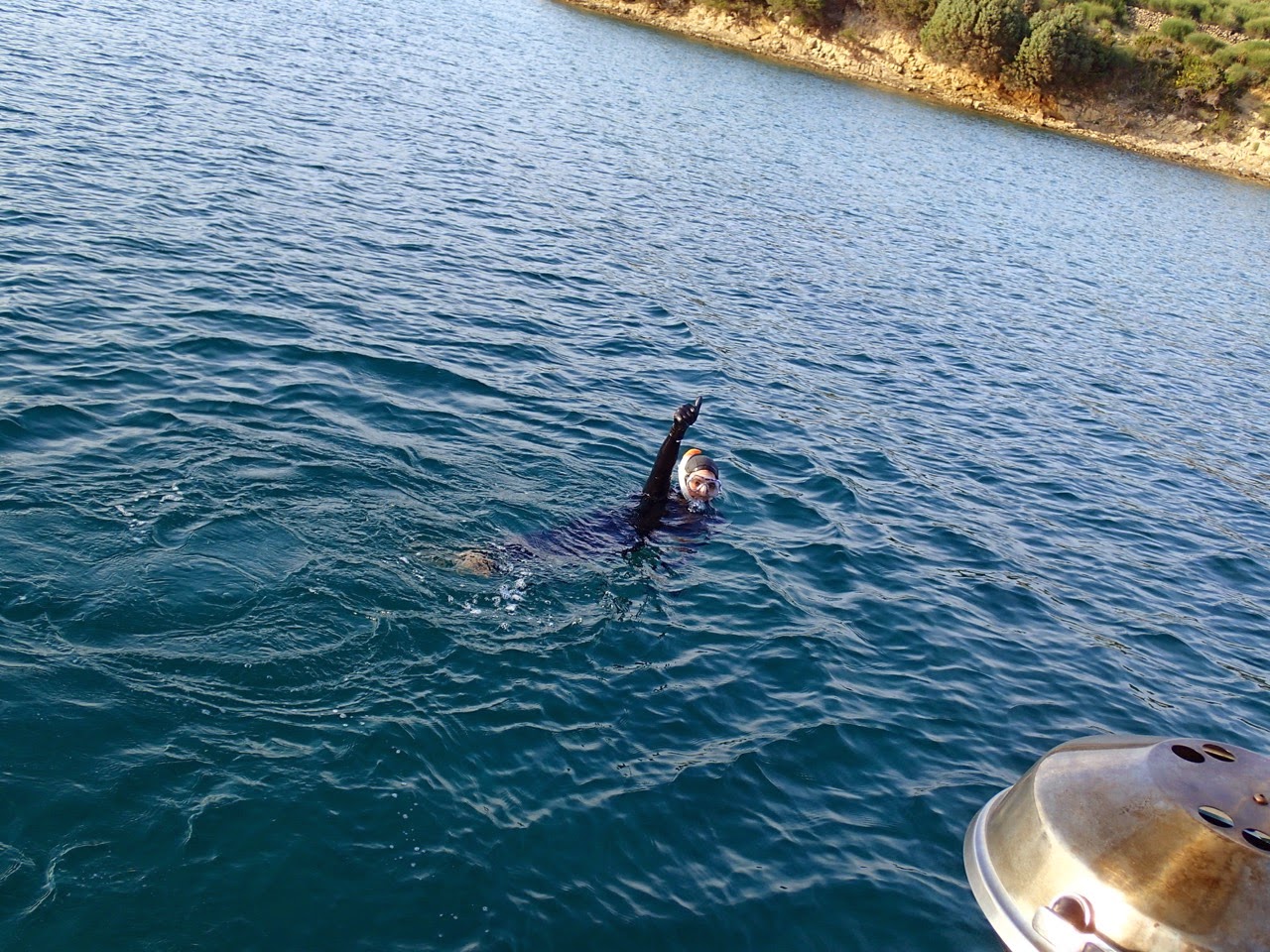 As you can see in above photo, it was also the time to open the BBQ season - we had a great dinner with meet, sausages, delicious tabouleh with lemon and tomato that Lucie made, and some nice local wine.

Next morning we sailed further South. The wind was not strong and was of course almost straight on our nose, but we had enough time and tacked towards town of Rab. On the way we stopped in one of the pretty bays, Tim and Lucie went for a walk and the rest of us did some boat projects.

We arrived to town of Rab in afternoon. We anchored in front of "our" little island... 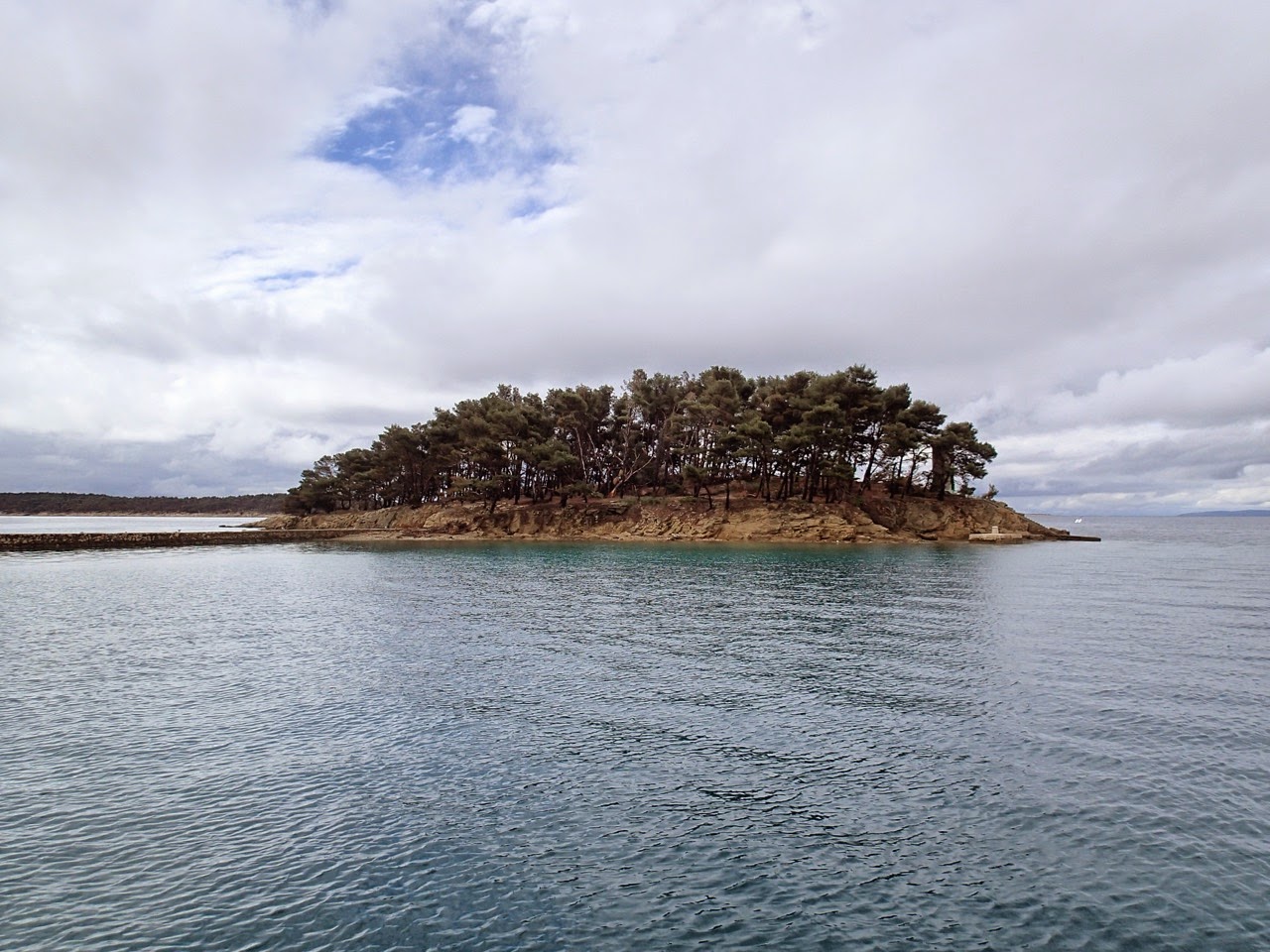 ... just on the North side of wave breaker this time, since the wind was from South. 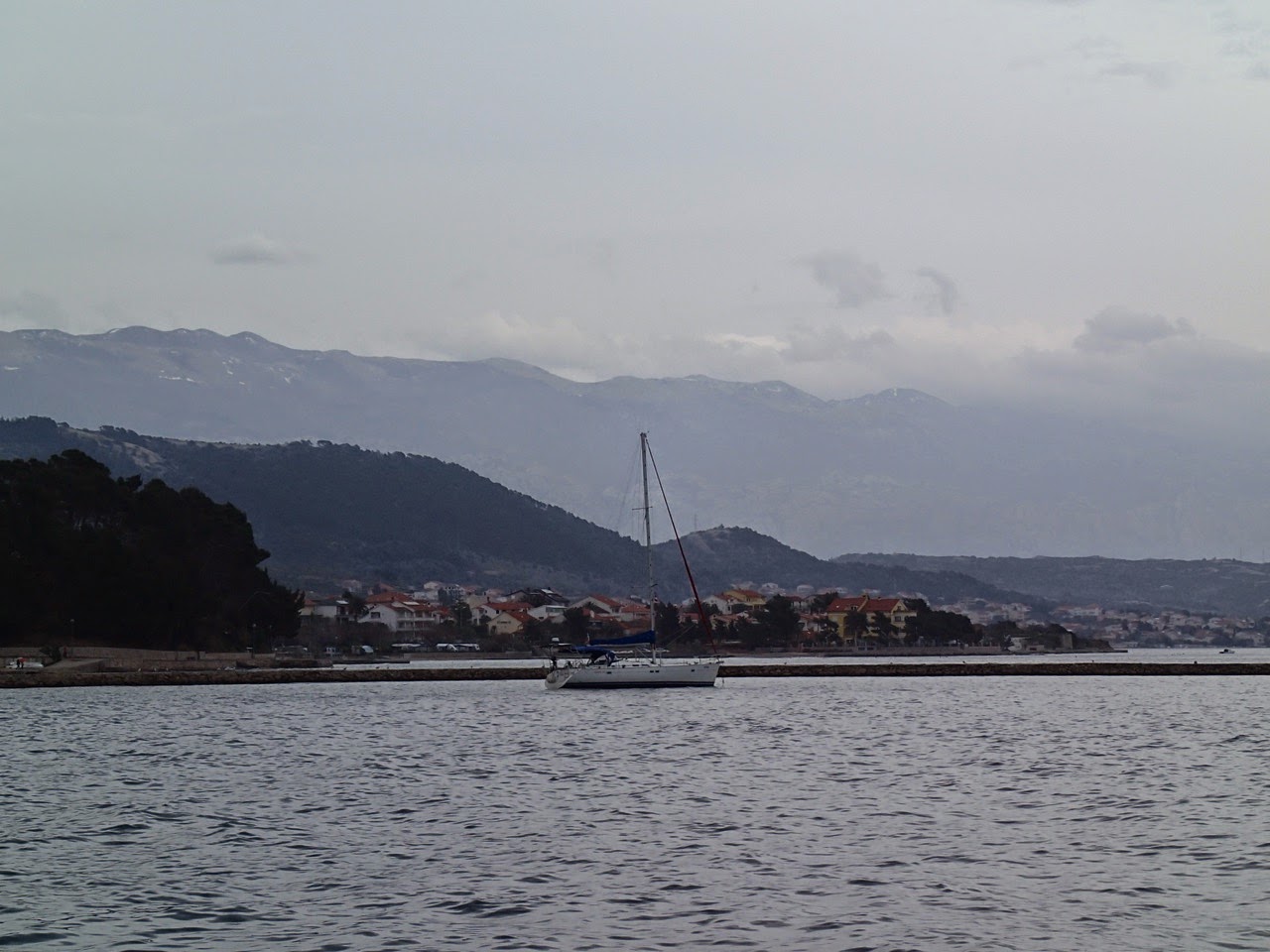 We went for a stroll in the town and despite clouds and occasional raindrops the town was still very pretty. 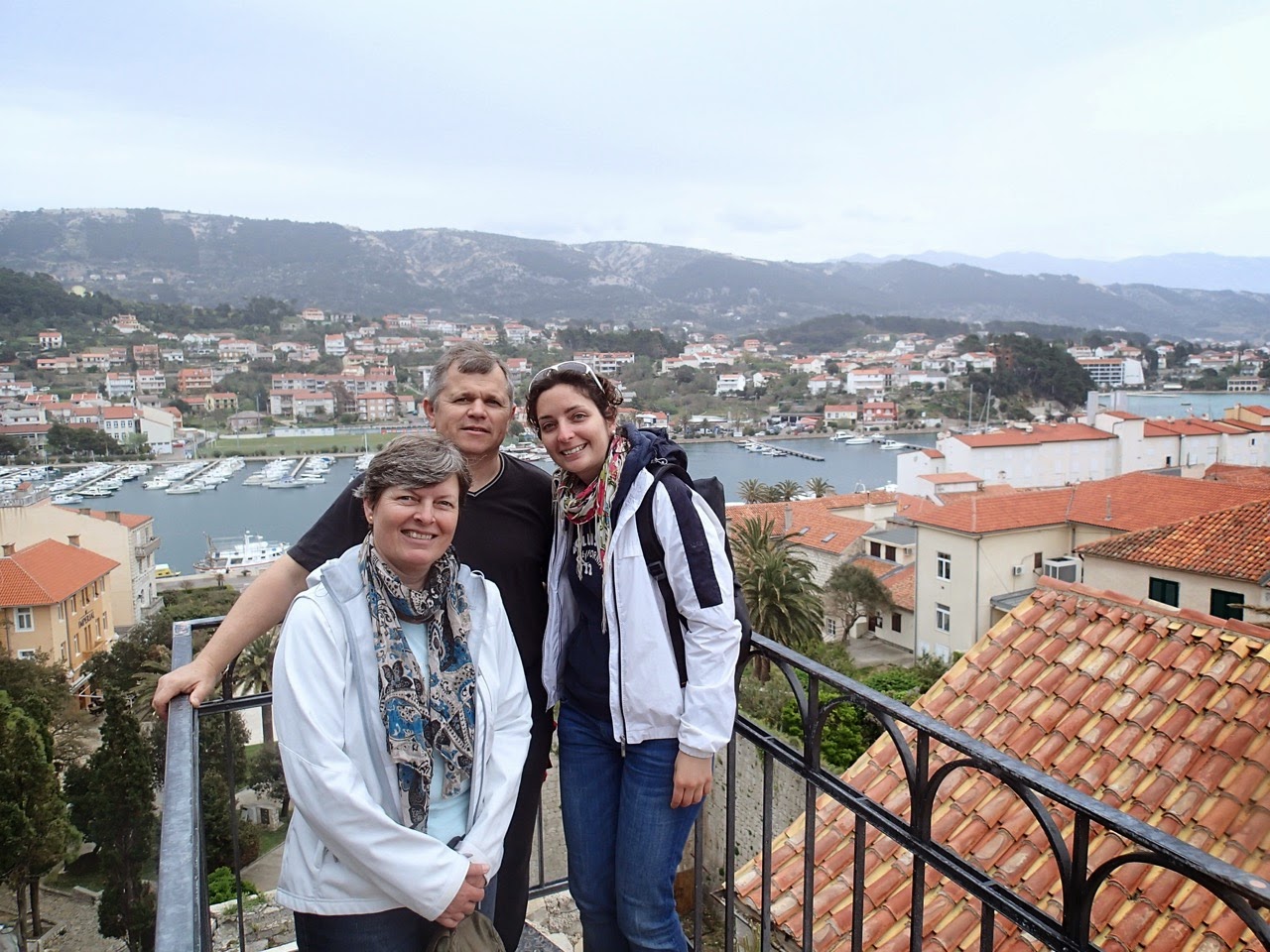 Of course I couldn't resist taking photos of the rocks and some flowers on the boardwalk. 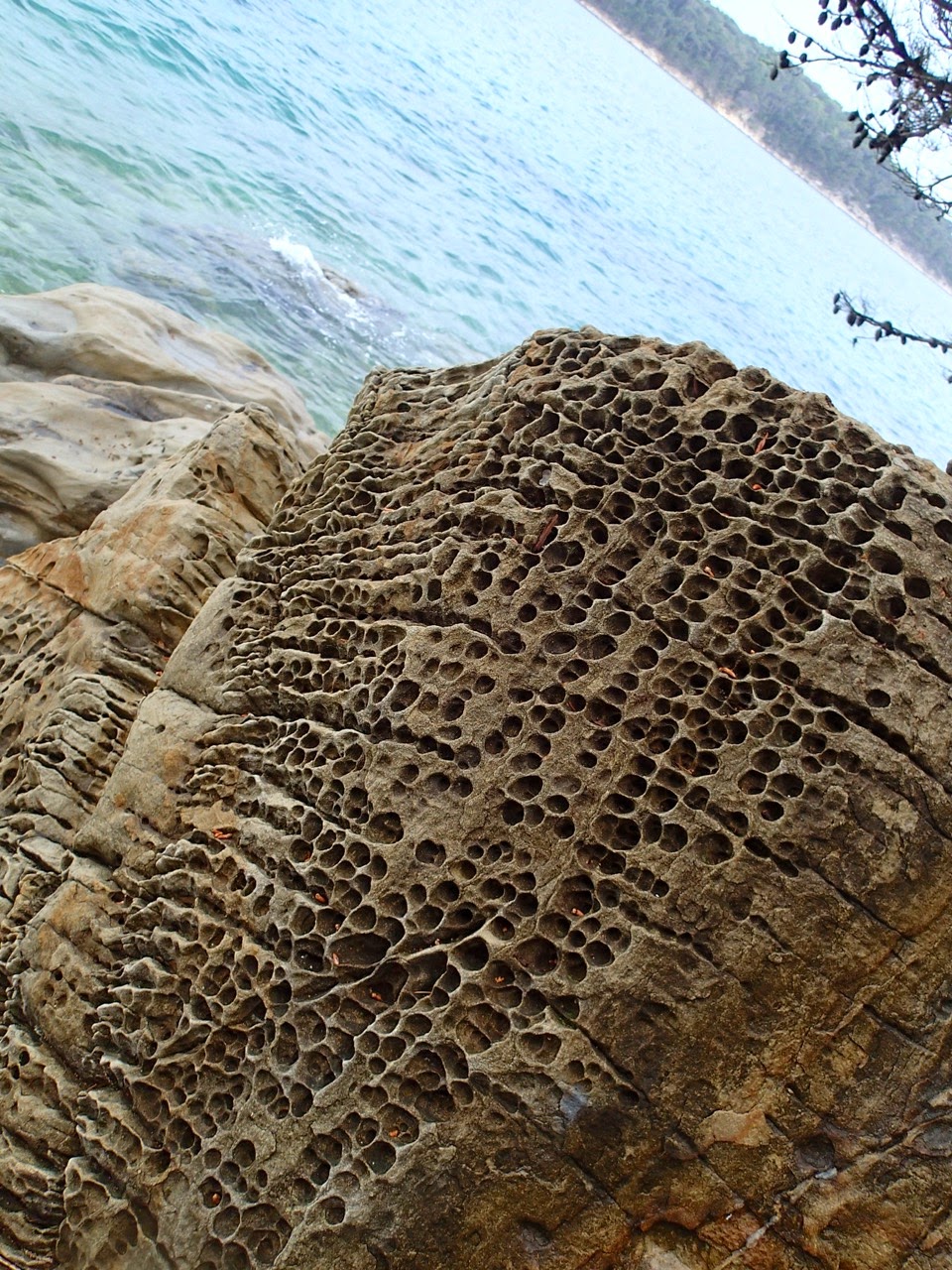 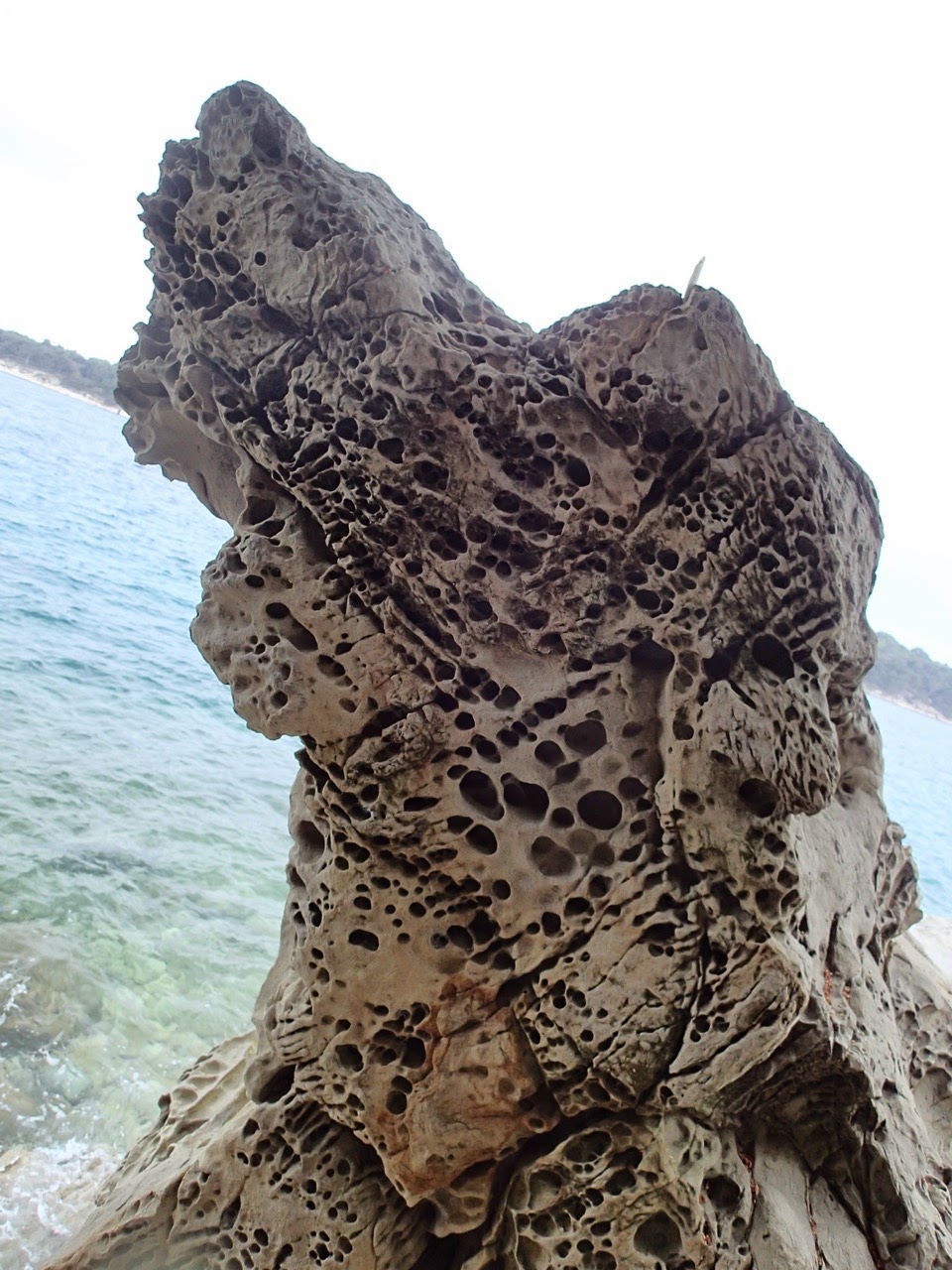 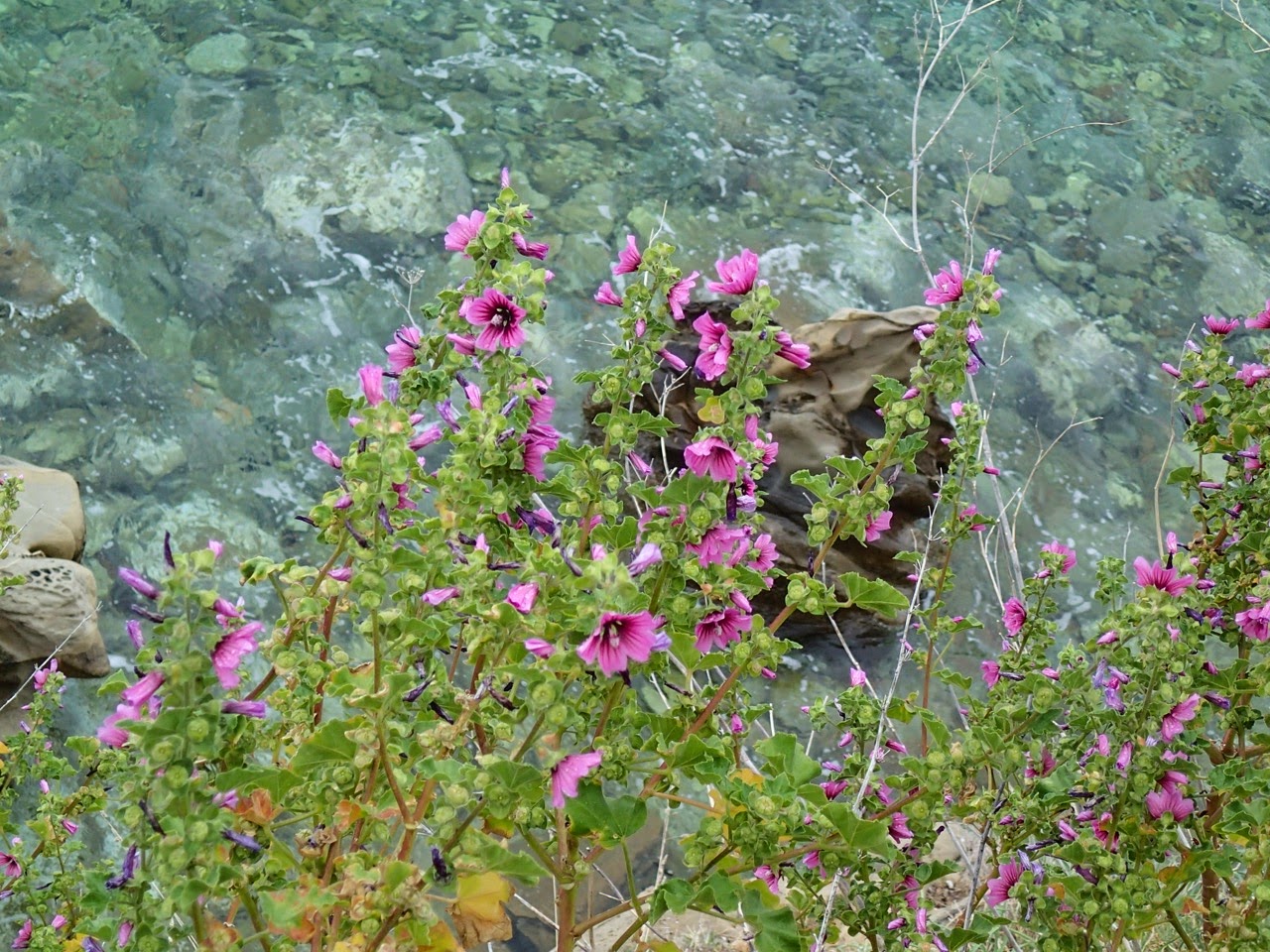 You can find more pretty photos of town Rab here.

Our crew proved themselves handy and eager to help, so we did some more boat projects. This is Tim, changing the water filter, under the watchful eye of the Captain. 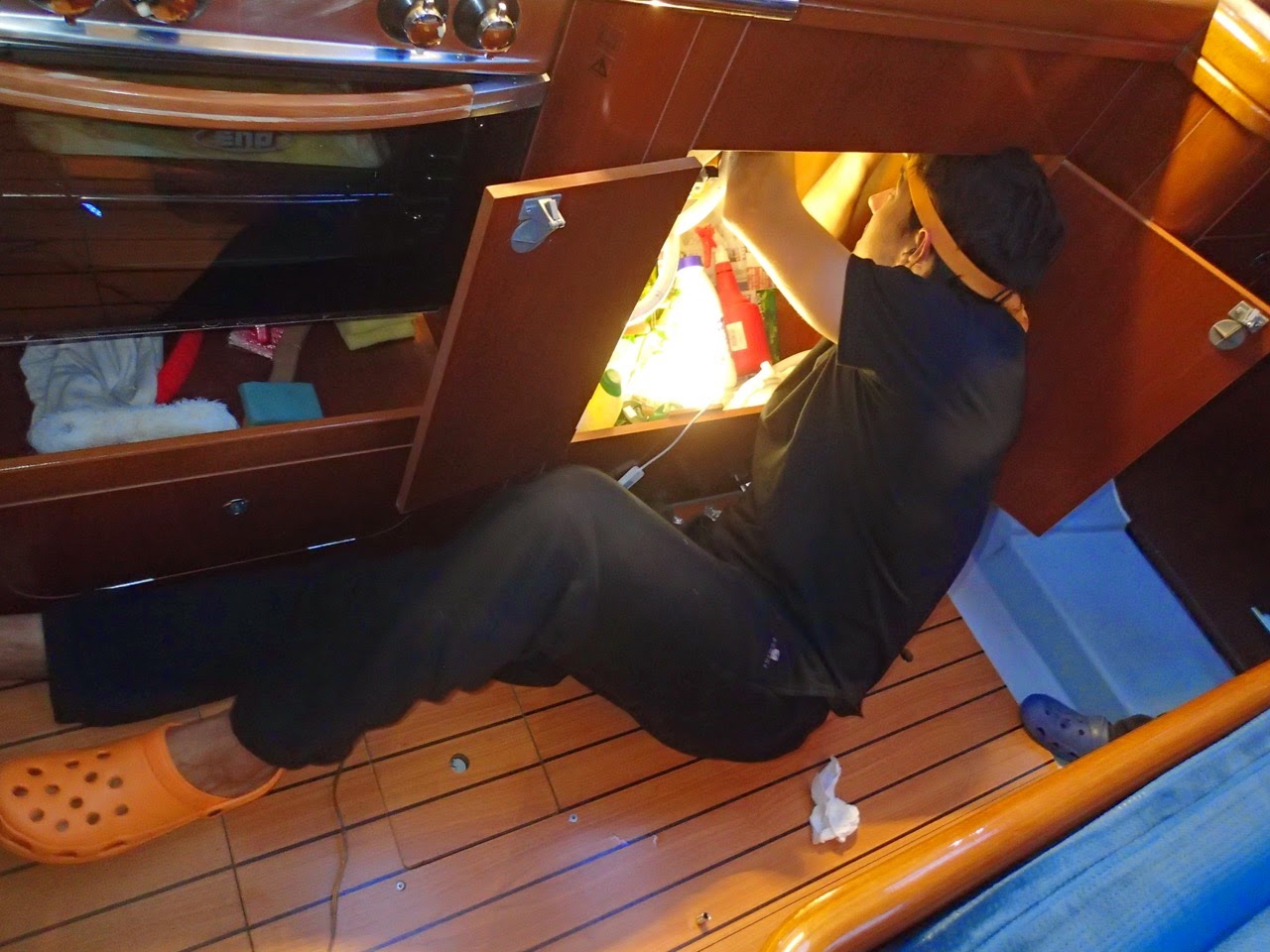 In the evening it got even colder, we were glad to have already prepared goulash with polenta with us, which is actually a winter dish, but it tasted just right, as the weather also felt rather winterly. Later the rain got heavier and in the night the wind got stronger also, so Captain and myself woke up frequently. But we were safely anchored and nothing bad happened.

Tim and Lucie made real French crepes next morning. Despite the cold, stormy and rainy night, we were instantly feeling much happier with our bellies full. 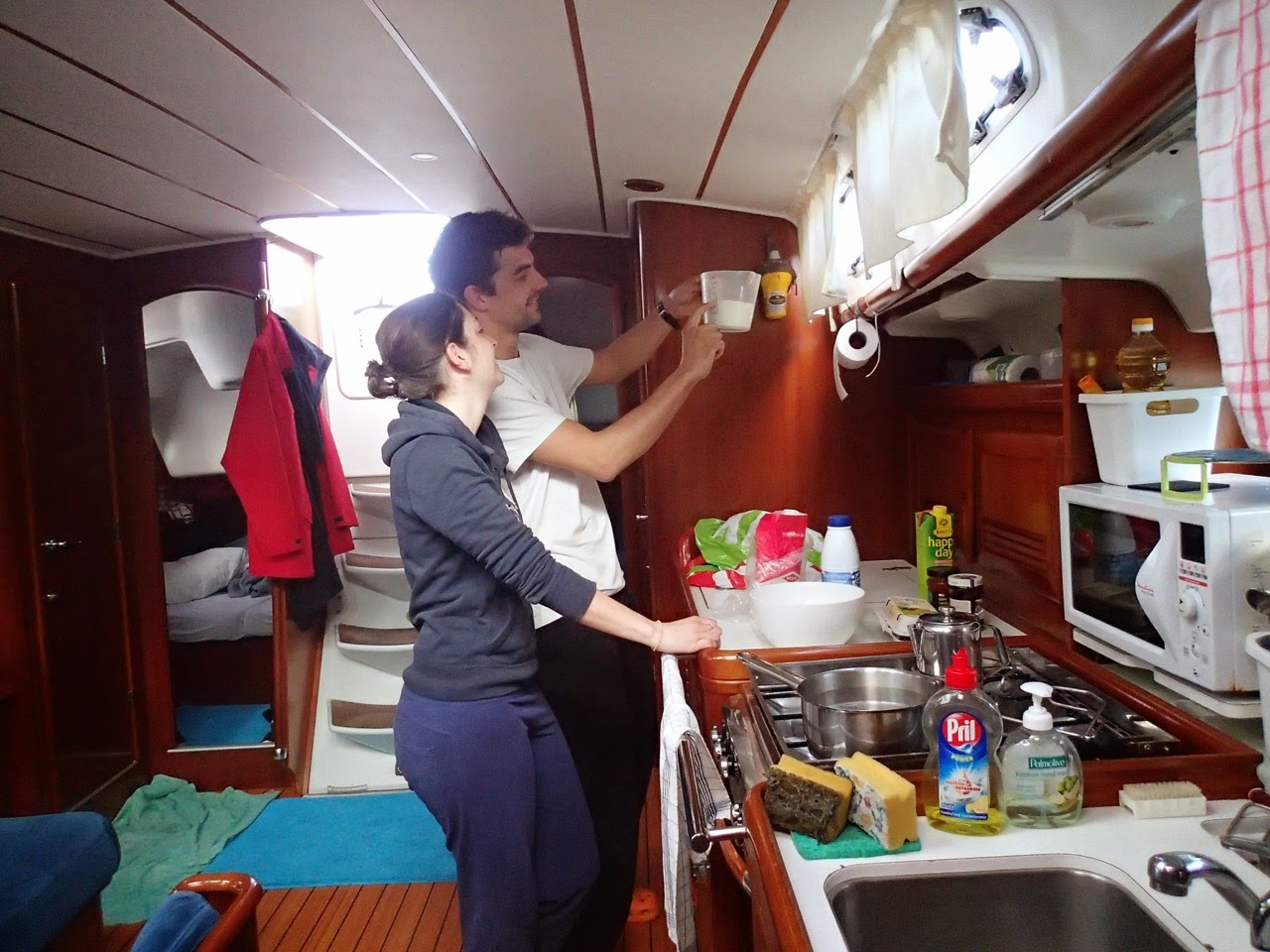 The weather started to improve in the middle of the day, so we sailed off, this time towards West. Our destination was South part of island of Cres. We weren't there before, so we checked few bays and coves to find the prettiest and most protected one. We shortly stopped in Uvala Majiška, but then moved to Uvala Baldarin. Just before we anchored, we saw a deer walking on the rocky coast. I was sorry that I didn't have my camera at hand. It was such a rare and pretty sight!

And in the evening we were again spoiled by good French food - Lucie cooked a delicious quiche for us. I could easily get used to food like this!

Next morning we woke into a bright and sunny day. Finally! All that gloomy weather was starting to get on our nerves... 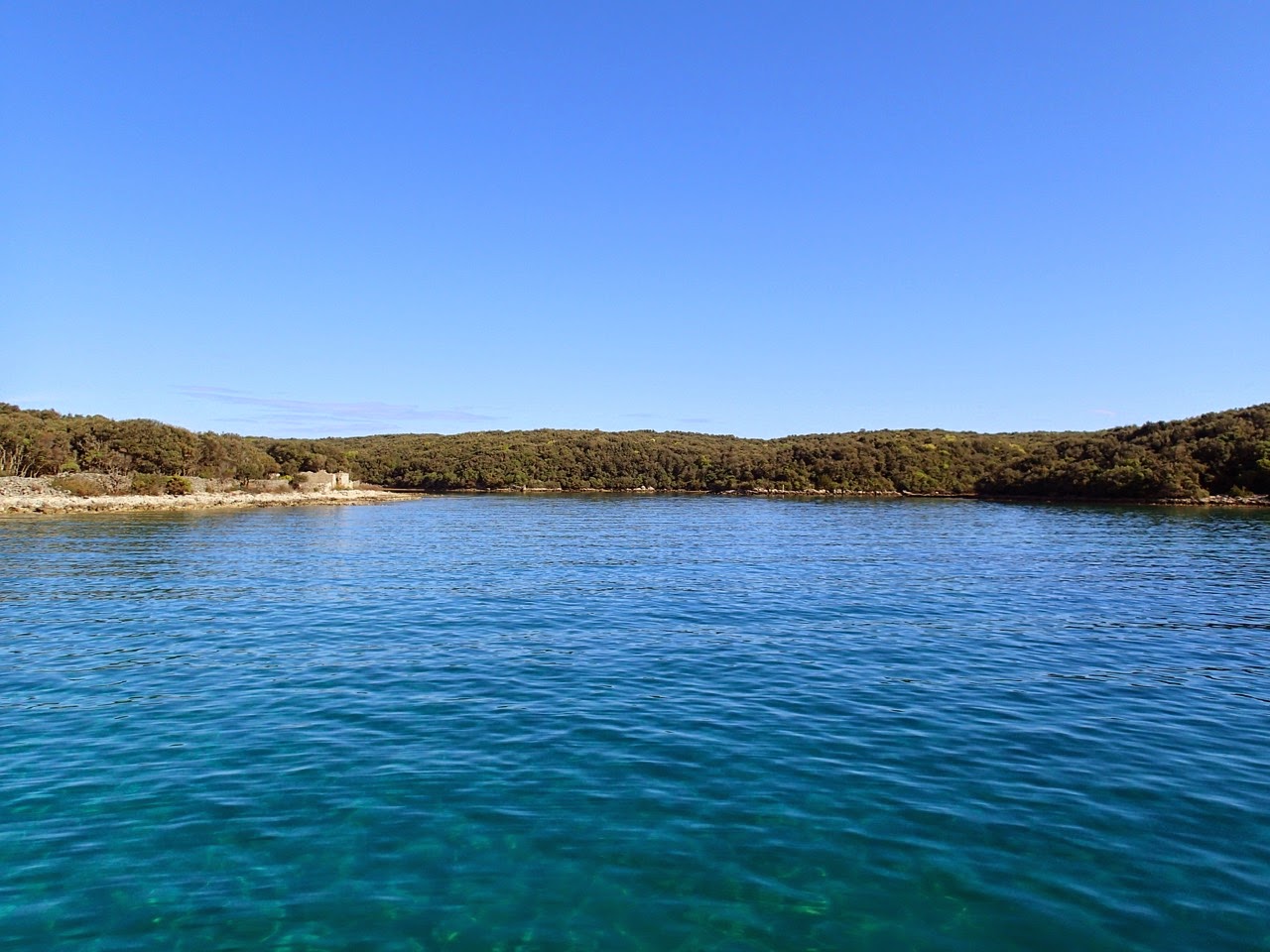 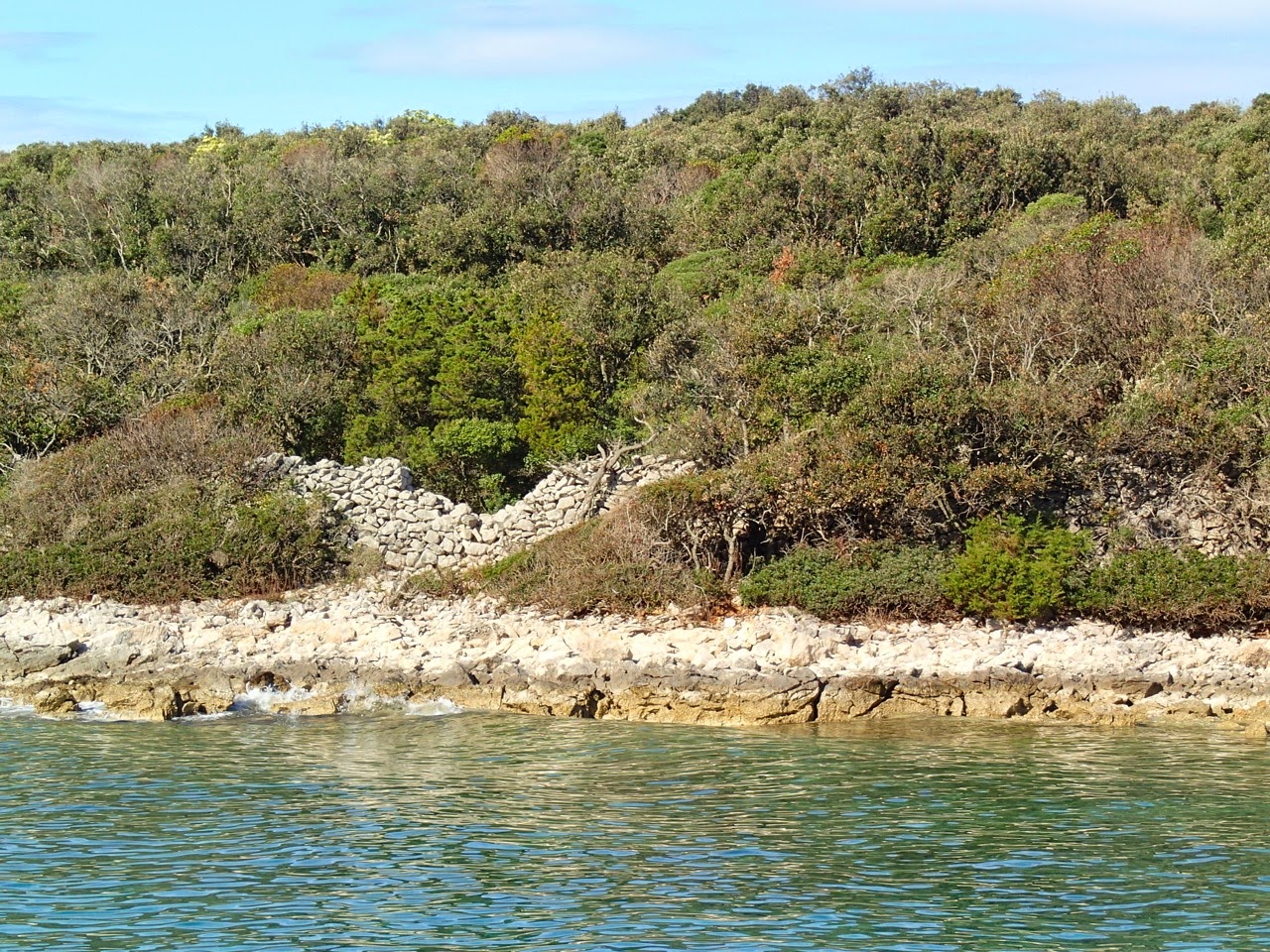 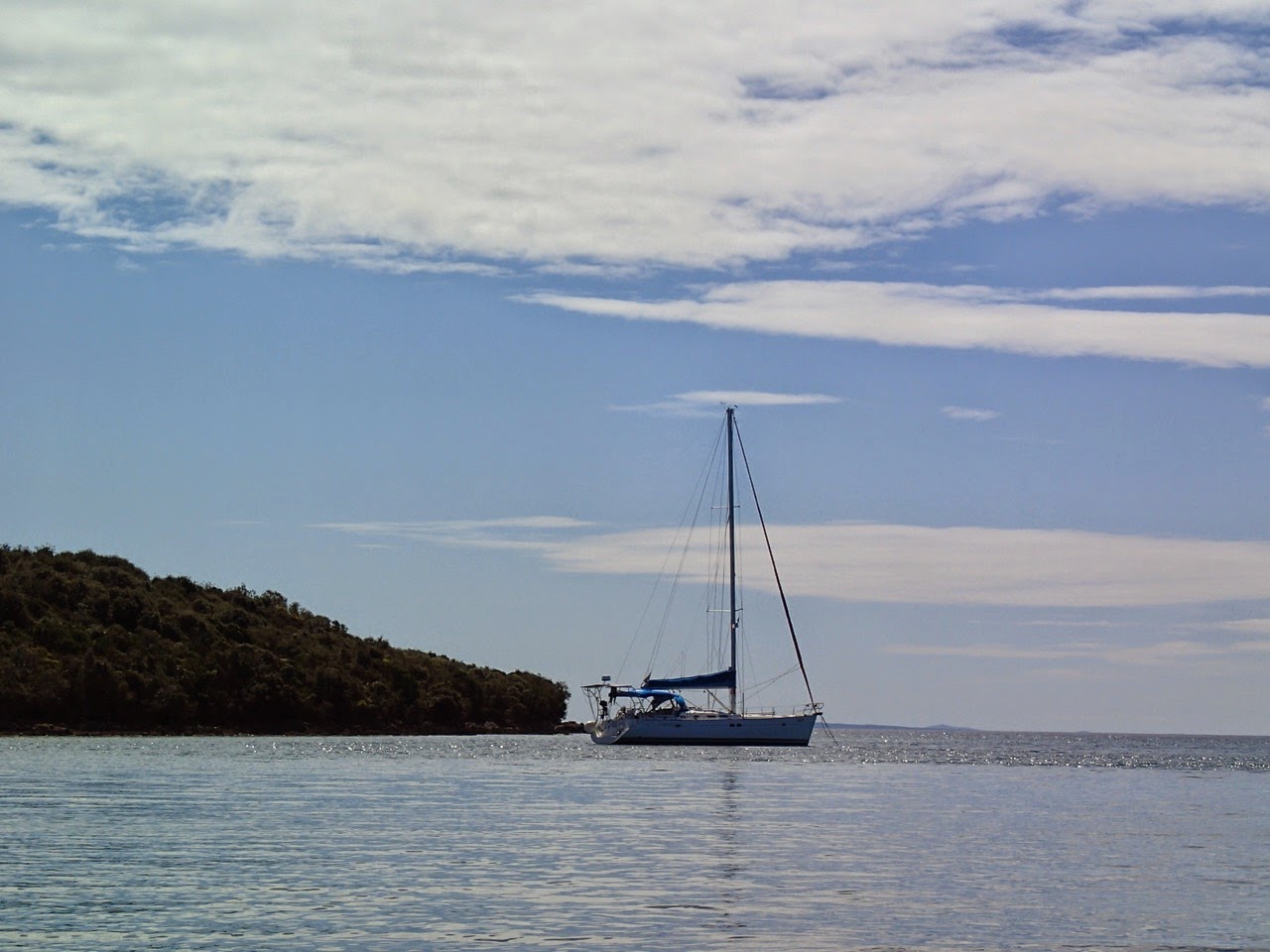 We dinghied ashore and went for a walk. Only a couple steps into the wood we met this snake - it was nonvenomous Aesculapian snake, or Navadni gož in Slovene. He was quite long, but looked rather non impressed by us. Regardless, we were watching our steps very carefully afterwards. 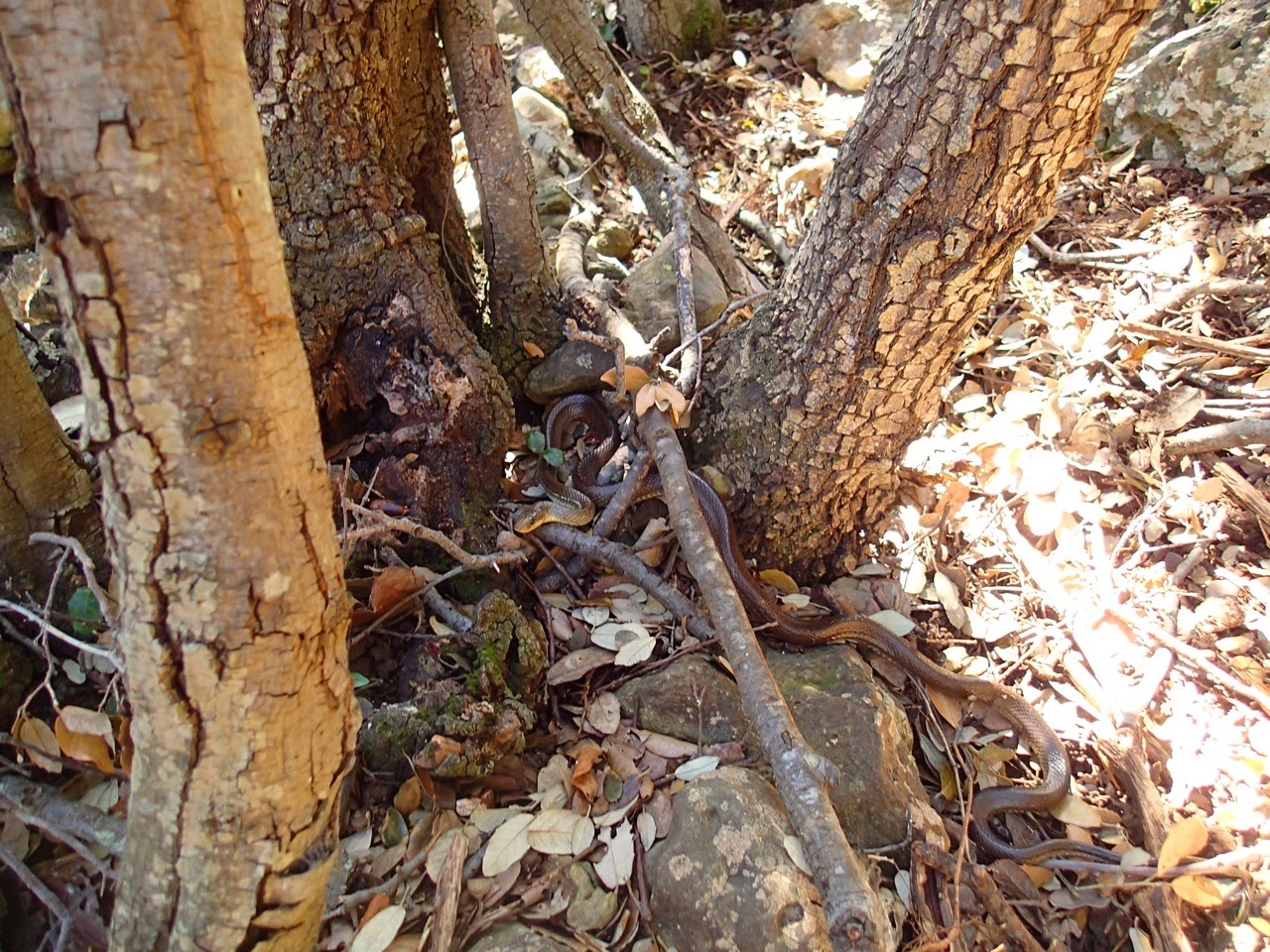 In the afternoon we sailed off. We had some wind at first, but after a while it died. We saw two schools of tuna hunting and I was happy that not all the tunas were gone from Adria.

We decided to sail to Hawaii again - the forecast for the night was wind with changing directions from South to West, then North and finally North-East, and Hawaii is really protected well from all sides.

It is really pretty there, it is difficult not to take hundreds of photos. 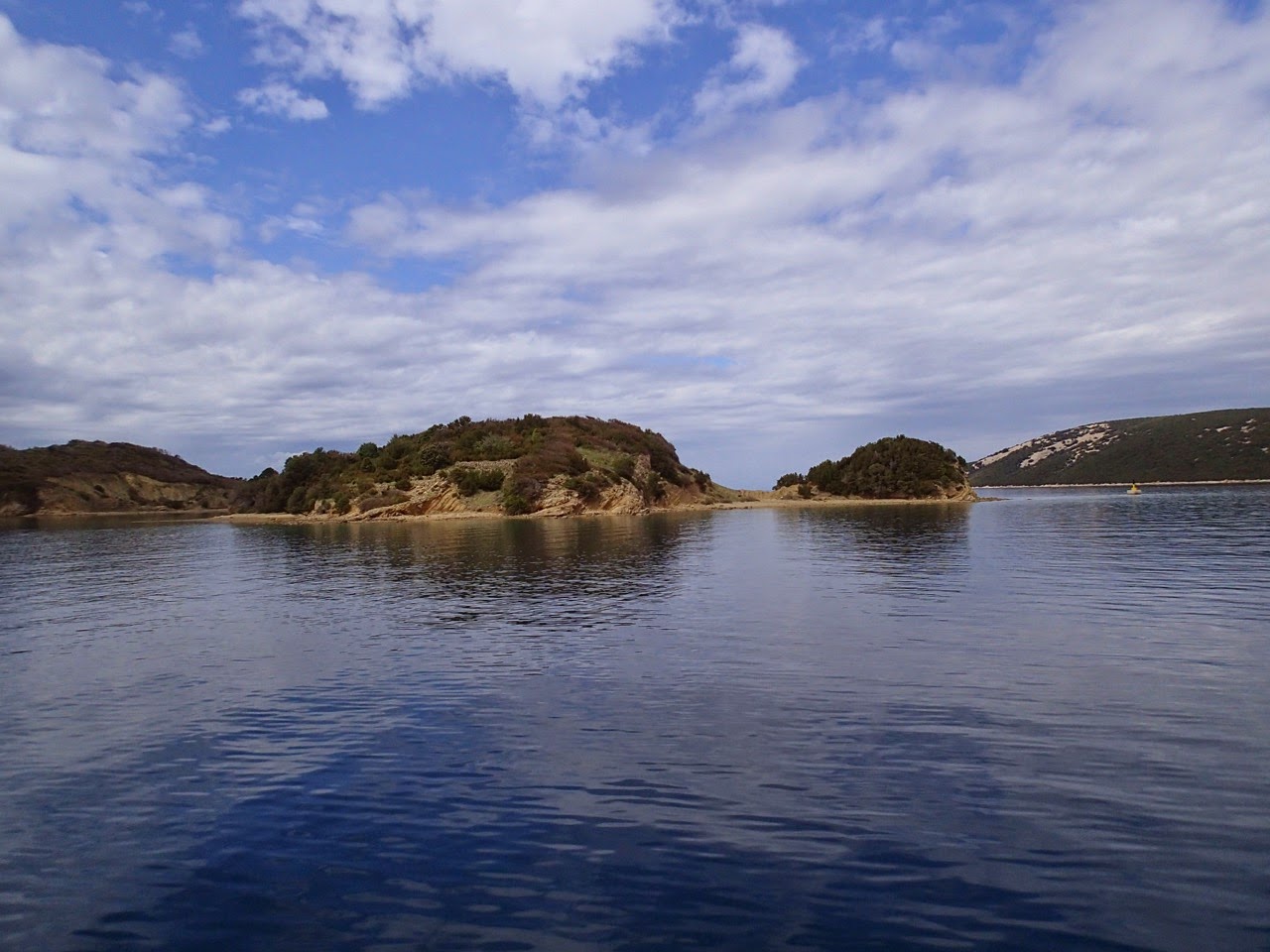 In the evening we had another BBQ. And some nice local wine. The night was calm, but again rather cold.

Next morning Lucie and Tim did some exploring of little islands surrounding our anchorage, and Captain and me did another boat project. We have a new bimini, the old one was leaking and the cockpit got wet in the rain, so we decided to replace it. It was the original piece that came with the boat and was 10 years old. We made some changes to new one's design, it now has "wings" on sides, that can be extended out to better protect from rain. We also want to have a piece to close the gap between bimini and sprayhood, and we made the pattern for it from plastic tarp.

Around midday we sailed or better motored off... 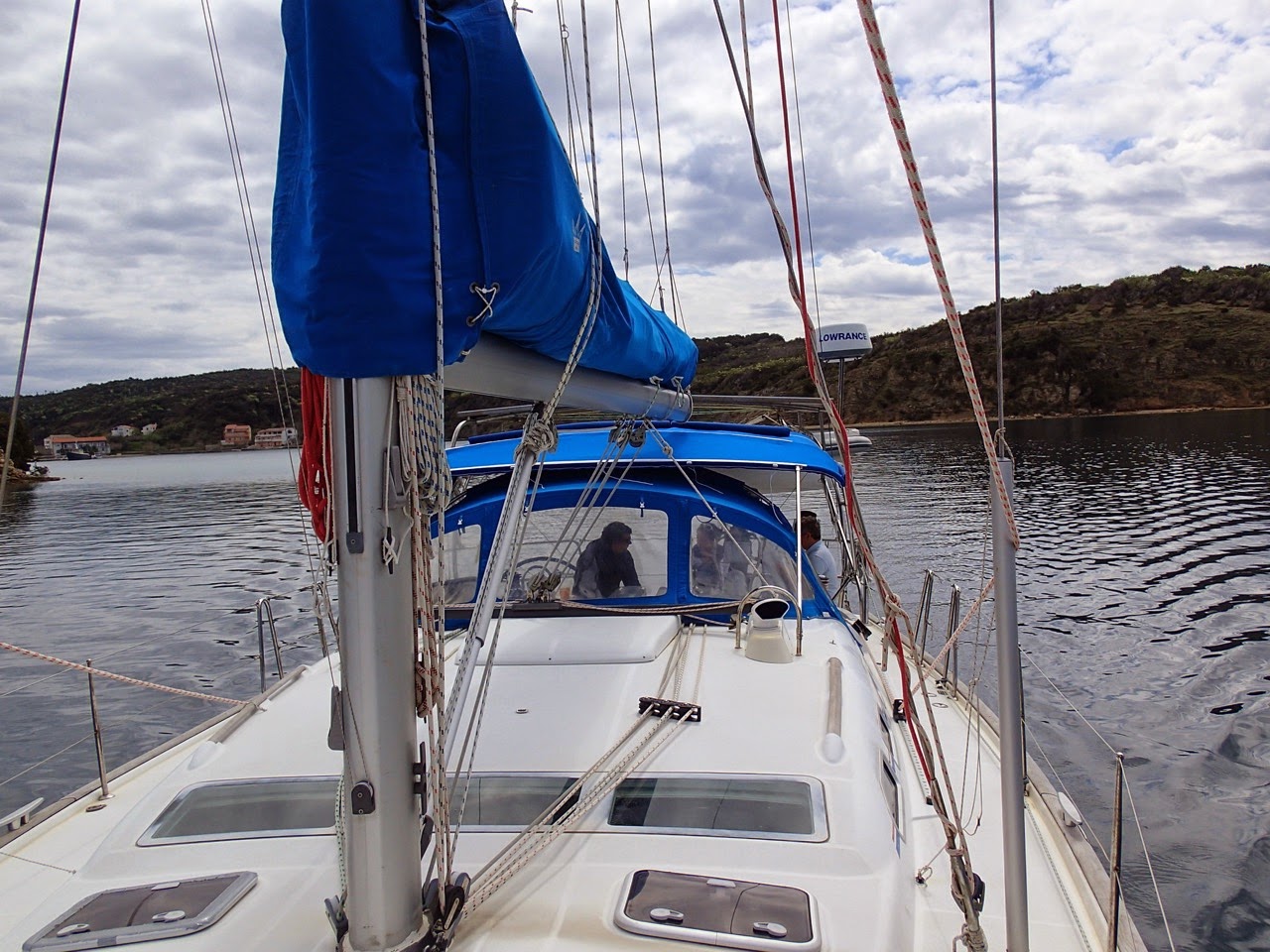 ... and made a stop at Goli otok for a short walk. 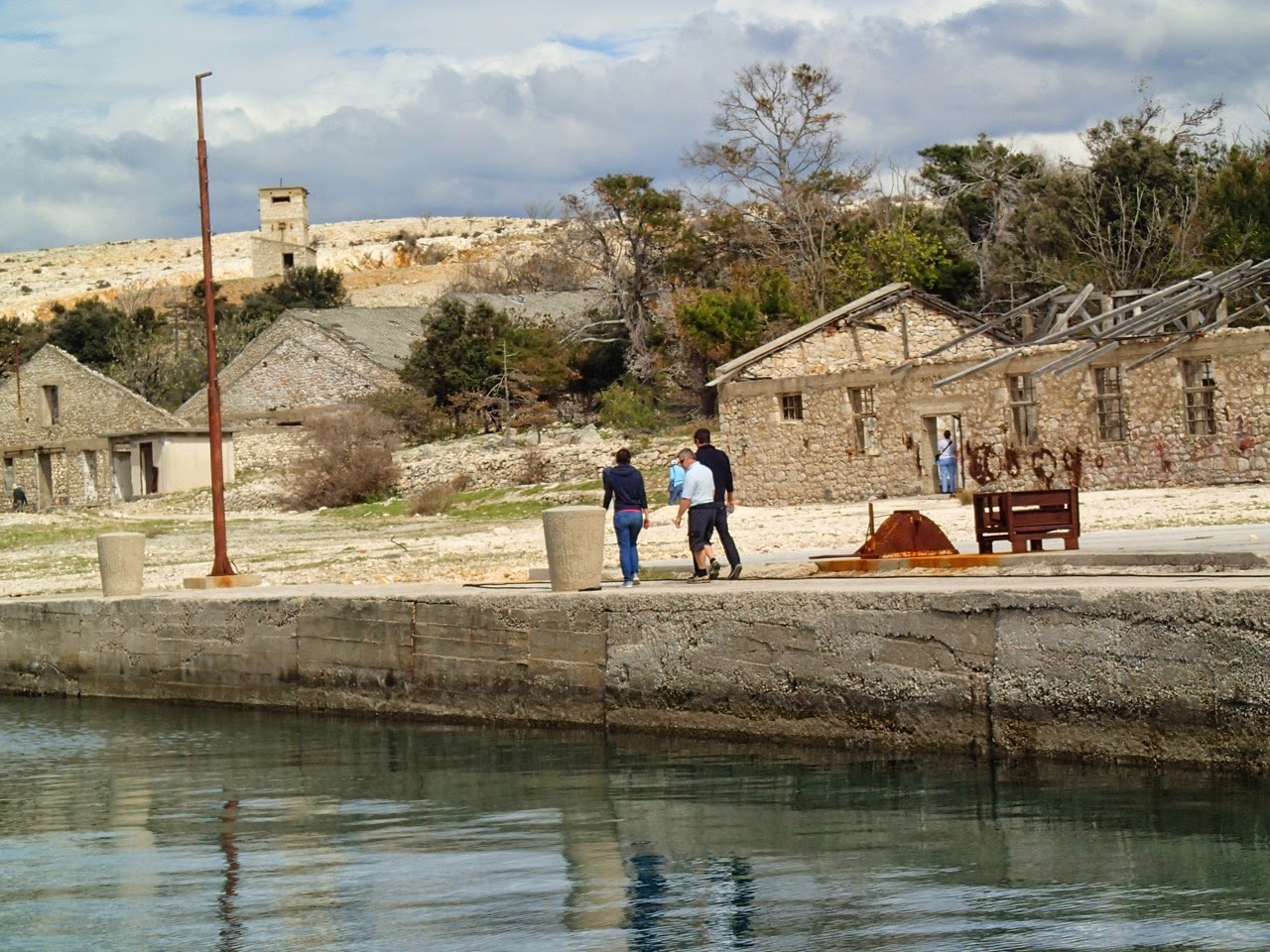 Then we motored on towards North, after a deliberation we decided to sail all the way to Klimno lagoon, the weather was suppose to worsen in the night and we felt we would be most protected there.

The sea was flat and calm, I was hoping strongly to spot a dolphin or two, but no luck. But there were really pretty clouds in the sky. 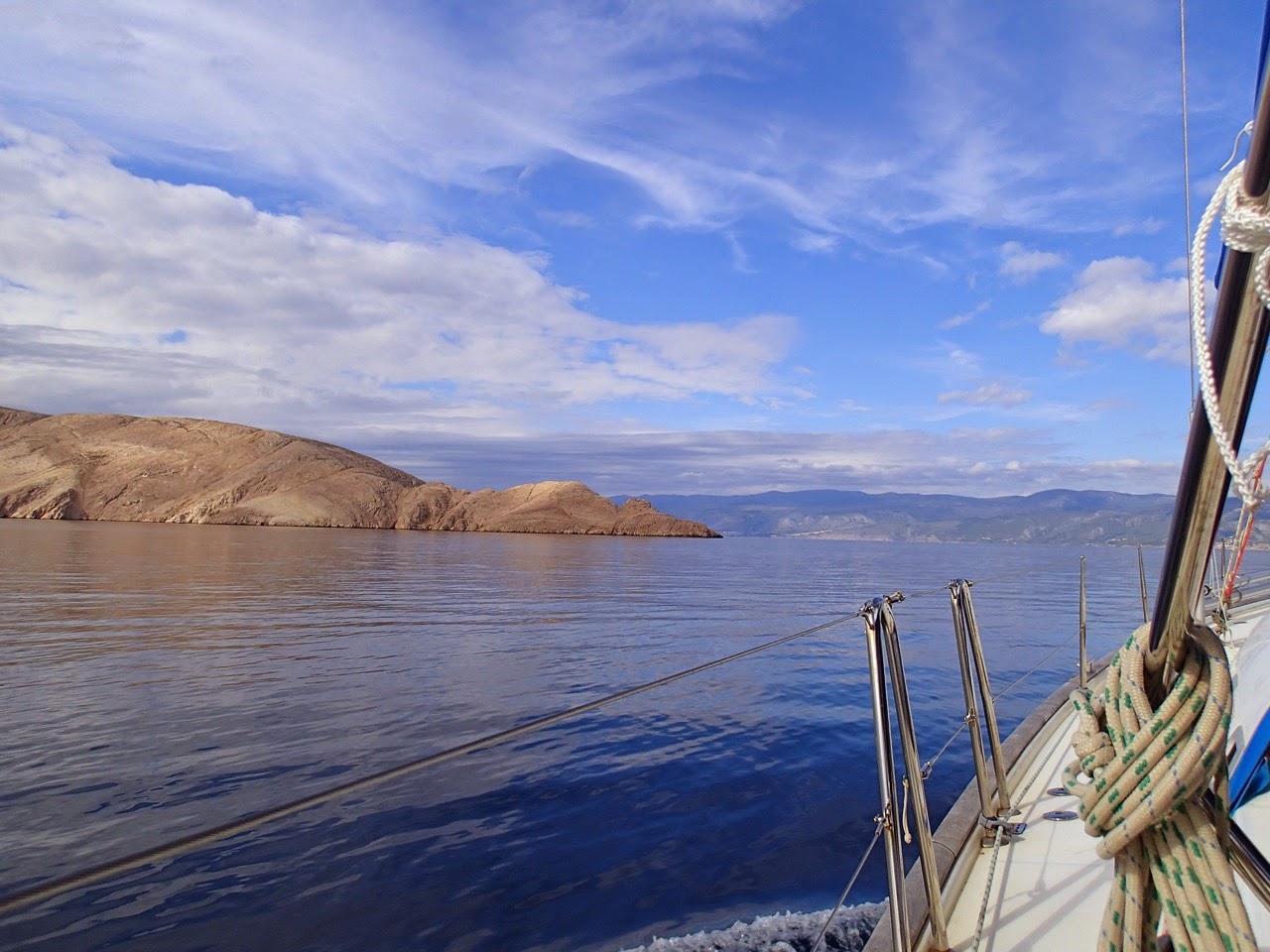 The sun came out from behind the clouds here and there and "highlighted" parts of sea or land, or a small stony island like in this photo. I know, it looks more like a submarine than an island. 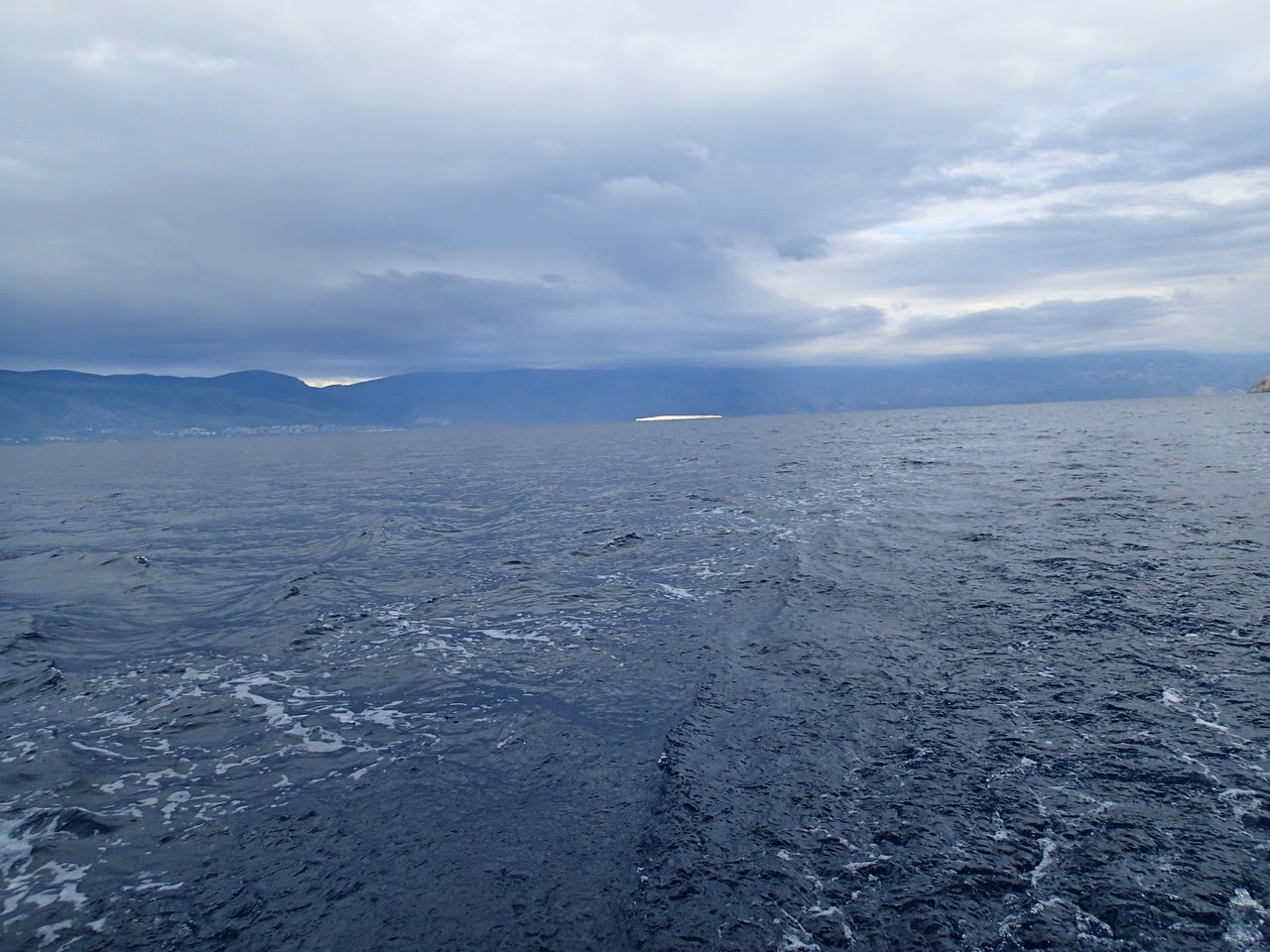 On Friday we had some sun and clouds again and a lot of wind from South. After breakfast we sailed out of the lagoon to make use of good wind. We sailed North to Krk bridge, then around small island of Sveti Marko, back under the second part of bridge, and then we were tacking towards the Klimno lagoon. It was rather sporty sailing, with lots of work on sails and a lots of cold wind. 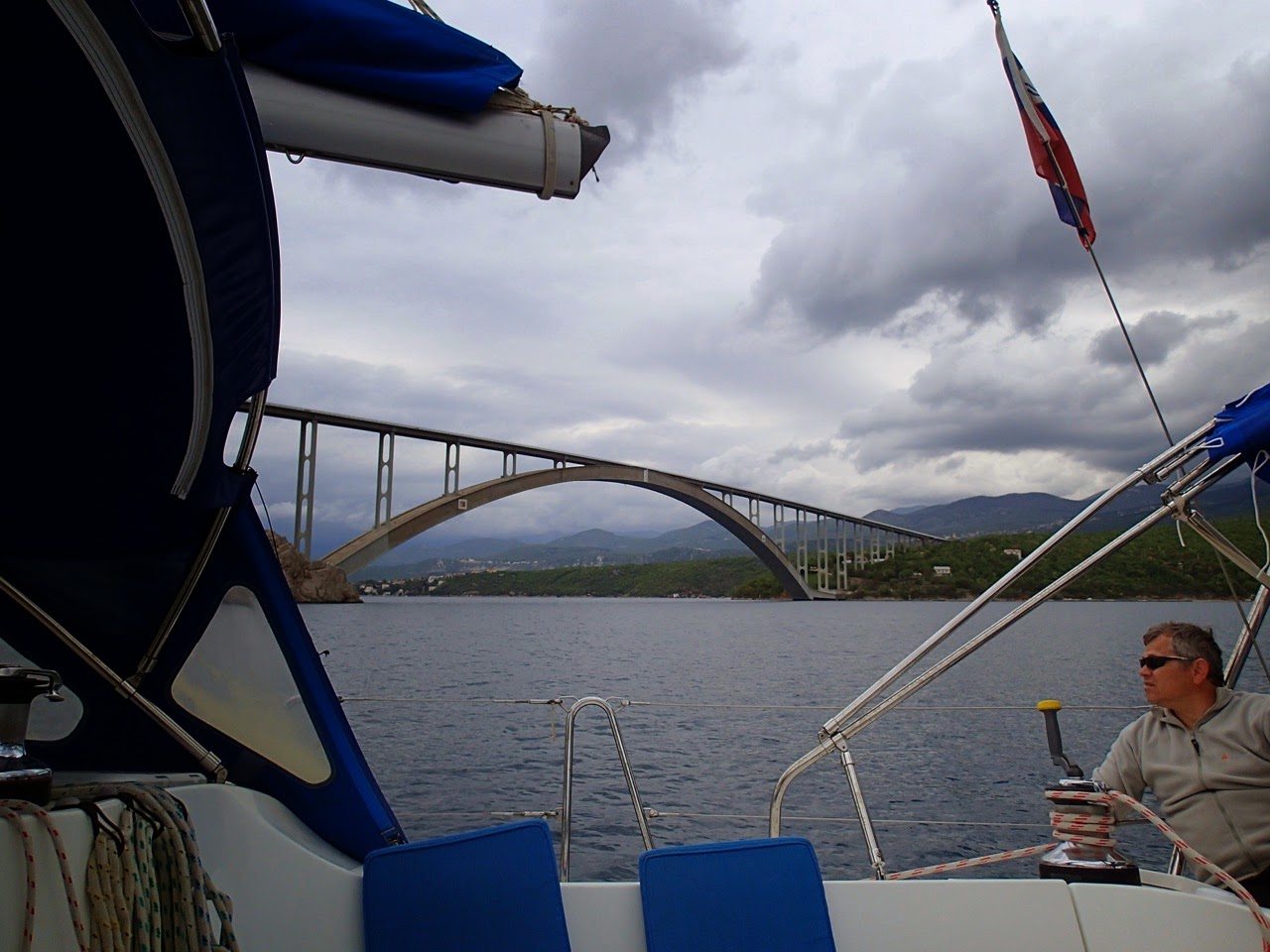 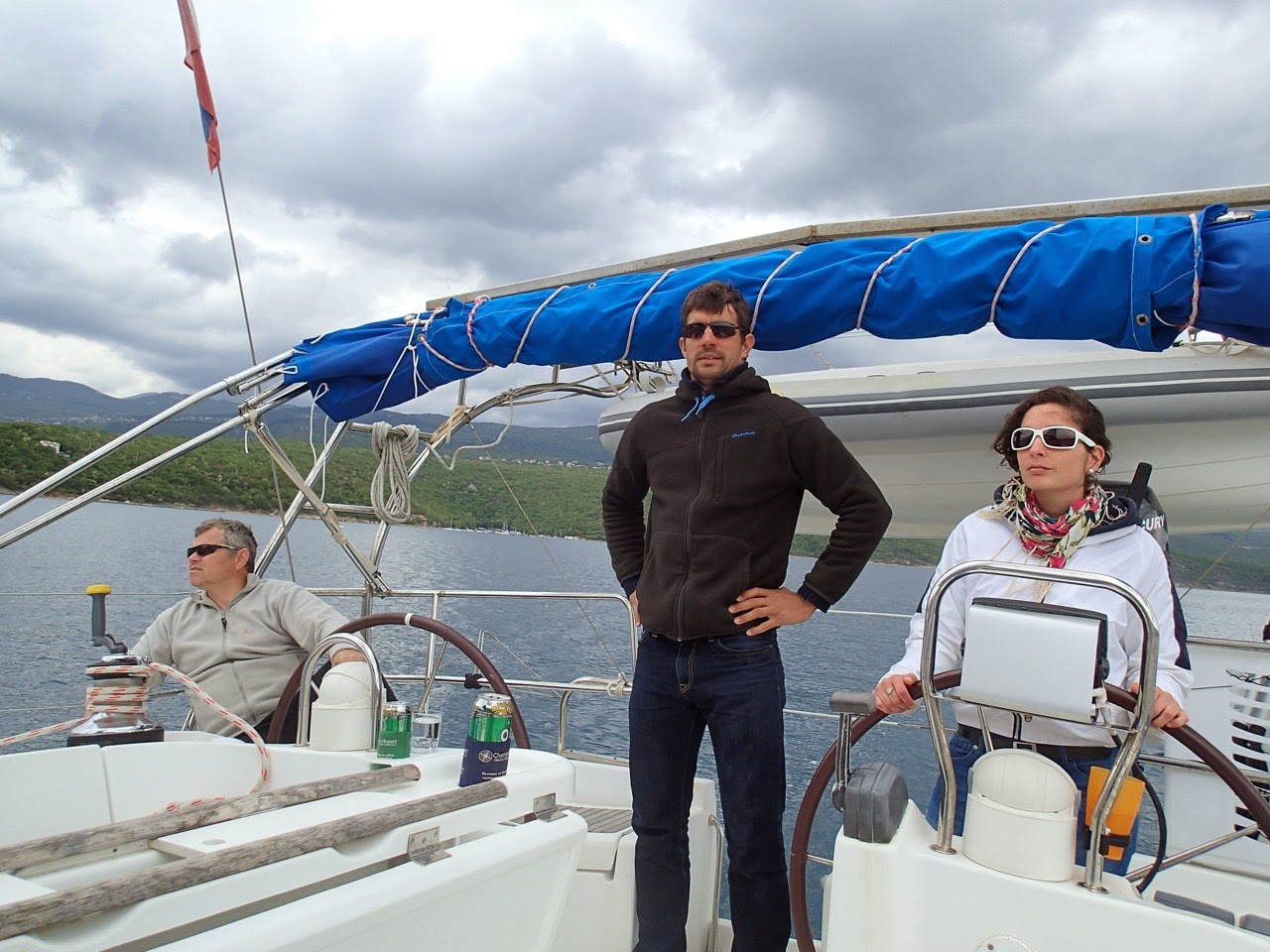 Back in Klimno we tidied the boat, packed our things and had a nice meal at "our" local restaurant Oleander. In the evening we drove back to Žabnica. Despite the weather we had a great week, with good company and delicious food and even some decent sailing.