There is a lot of stuff we decided we need and want on our sailboat for the journey. Ok, not all of it is necessary, but we (or should i say I) have a soft spot for gadgets, have to admit.

This one is one of my favorites - the Inmarsat IsatPhone Pro. I knew from the start that i want a sat phone, mostly because of our parents - i felt they need the assurance that we can be reached wherever we are and that we can contact them anytime and from everywhere. Couple of years ago, when i start looking at sat phones, there was not very much choice and the prices were high. I kept on looking at the market in hope that over the years things would improve, but for couple of years not much happened. And last year things finally came together - Inmarsat announced the phone that was affordable, had good coverage and a prepaid plan. In details - the phone itself costs far less than my iphone, Inmarsat satellites cover almost the whole globe except the poles (where it is to cold for me anyway) and in our 2010 summer sailing holiday in Seychelles i payed for calling my mom from my mobile almost 4 times the price i would pay, had i already owned the sat phone.

There are couple of shops in Europe that are selling sat phone with prepaid plan over the internet and it pays to check the current prices, they dropped considerably in few months since the phone was released. Currently phone costs about 500 €, one minute of calling about 0.8 €, SMS about 0.4 €.

We got the phone from Germany a week ago, 5 days after ordering it. It was loaded with 100 units, next day additional 125 units were loaded. I have to say, with Germans one can always count on speedy delivery and great customer care - we bought our phone on  www.m-cramer-shop.de . Of course i tested the phone immediately, standing in our yard in my warmest winter coat - it was freezing outside, but the antenna must point towards the sky. Everything worked perfectly, from receiving and sending SMS and placing and receiving calls. Menus are very intuitive, so luckily i did not have to read the user manual in that freezing cold. Our friends will for sure mostly love the possibility of sending SMS from Inmarsat web site to our sat phone for free! 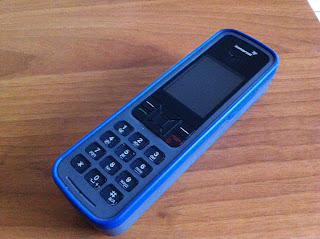 It is not as small as todays mobiles, but my first mobile was bigger and heavier :-) 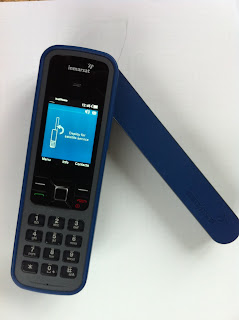 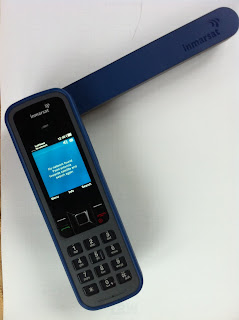 Some pictures of Heron in Koper 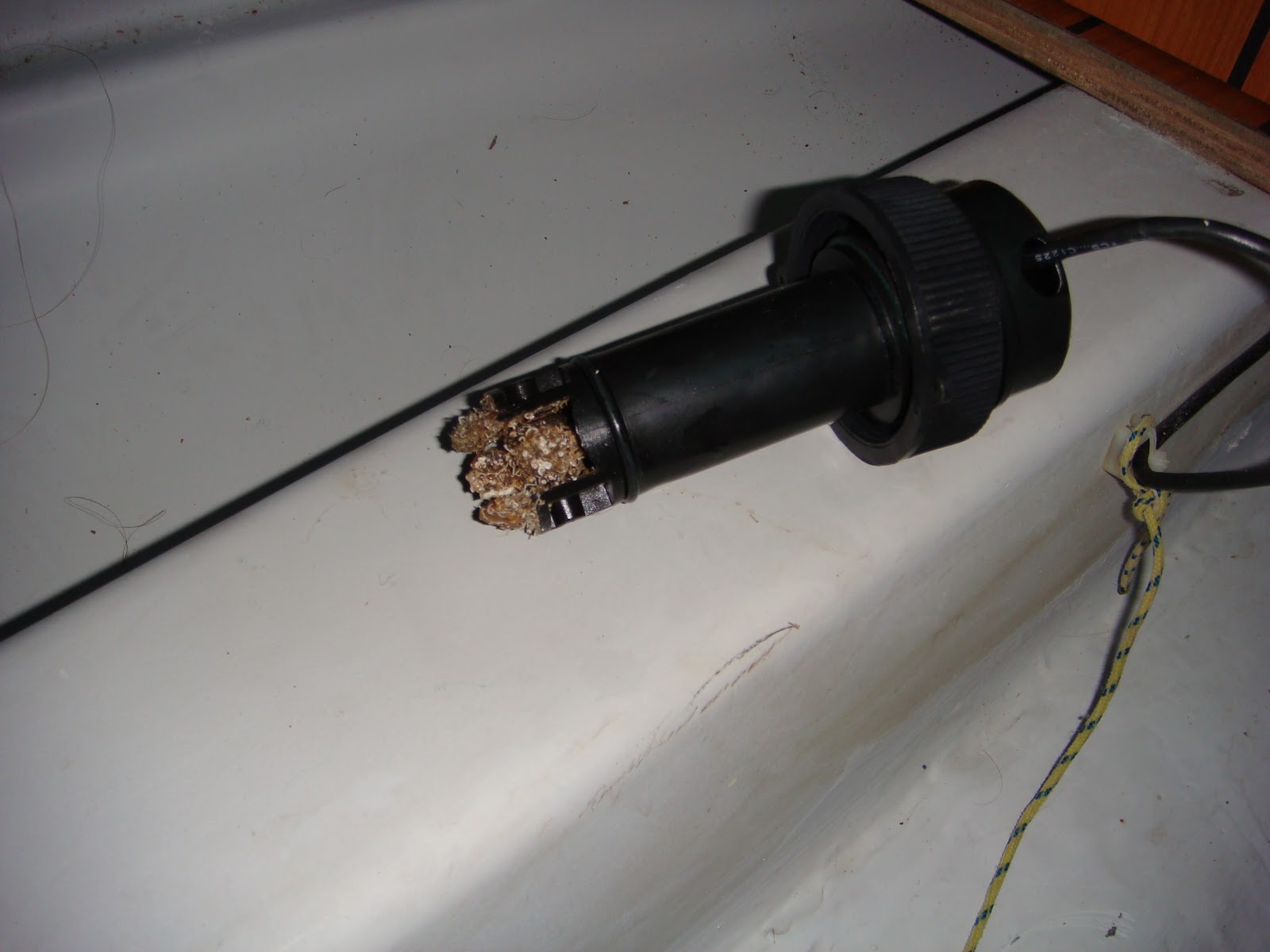 Speed log did not work on our delivery trip. I pulled out a paddle wheel in Koper and it was clear why. The wheel was covered with barnacles.

We want to build stern arch for solar panels and dinghy davits. Look, here will go the panels.. 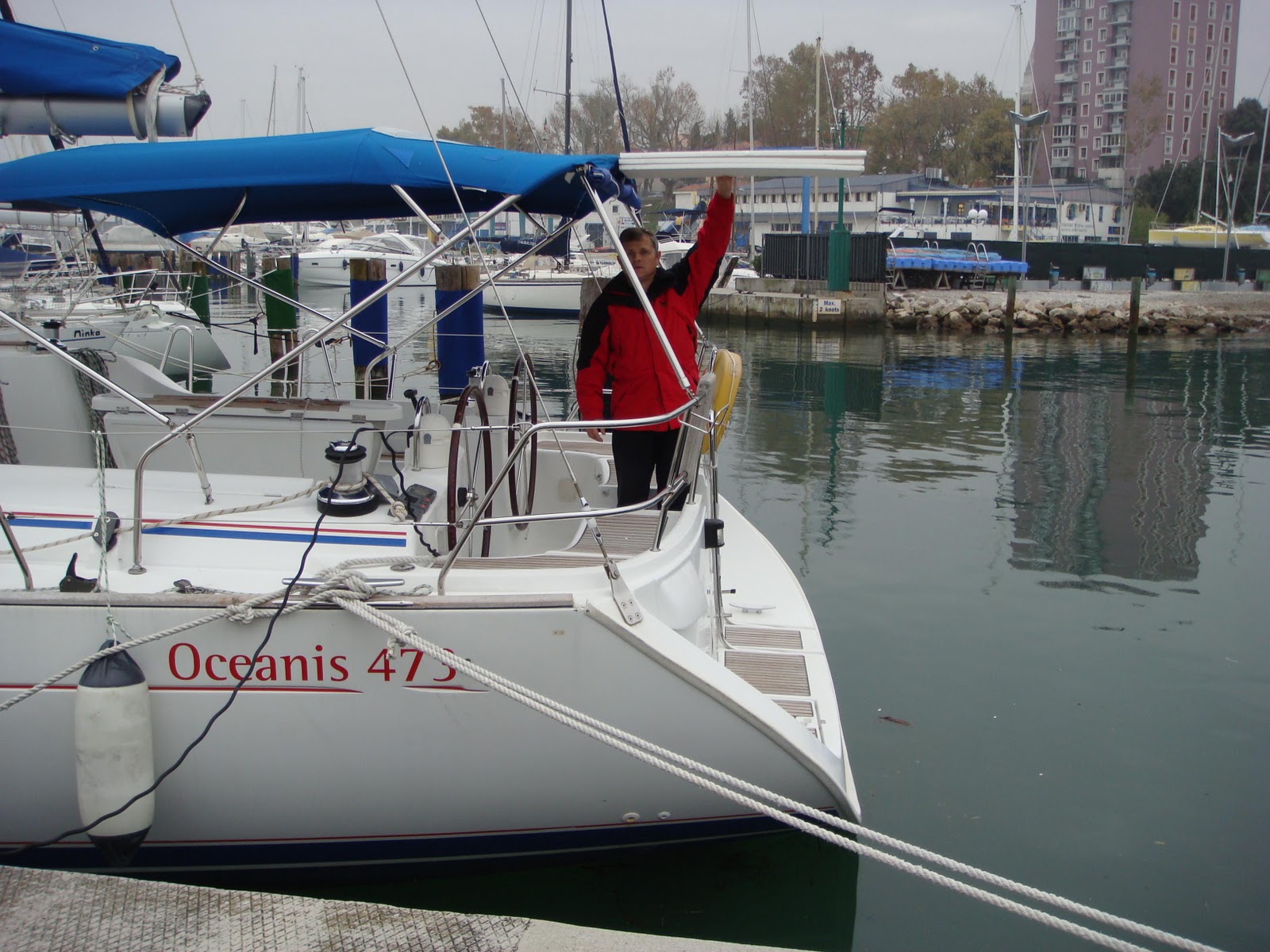 We also need to buy a spray hood. Something like this. 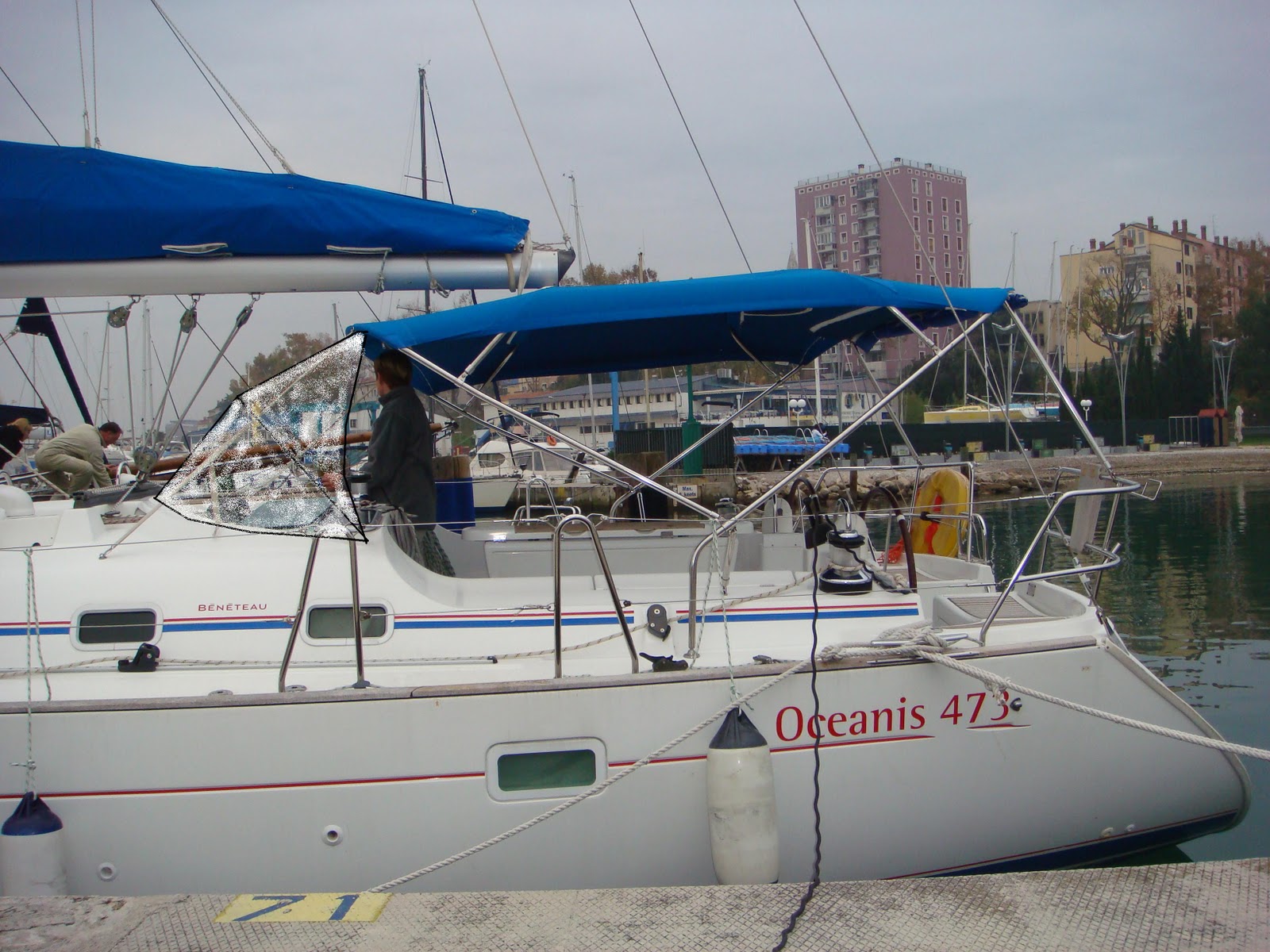 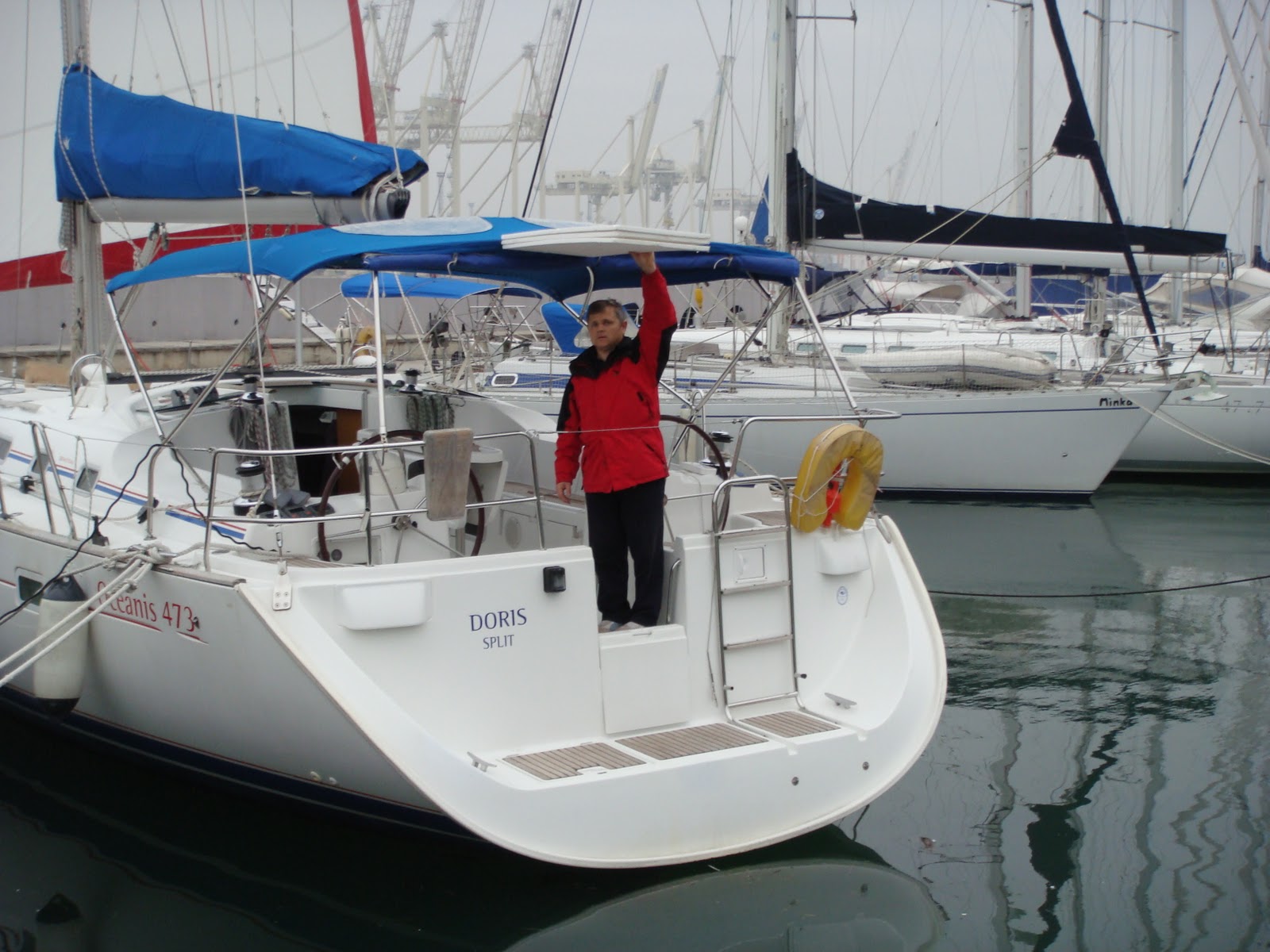 Here you can see our new registration number. 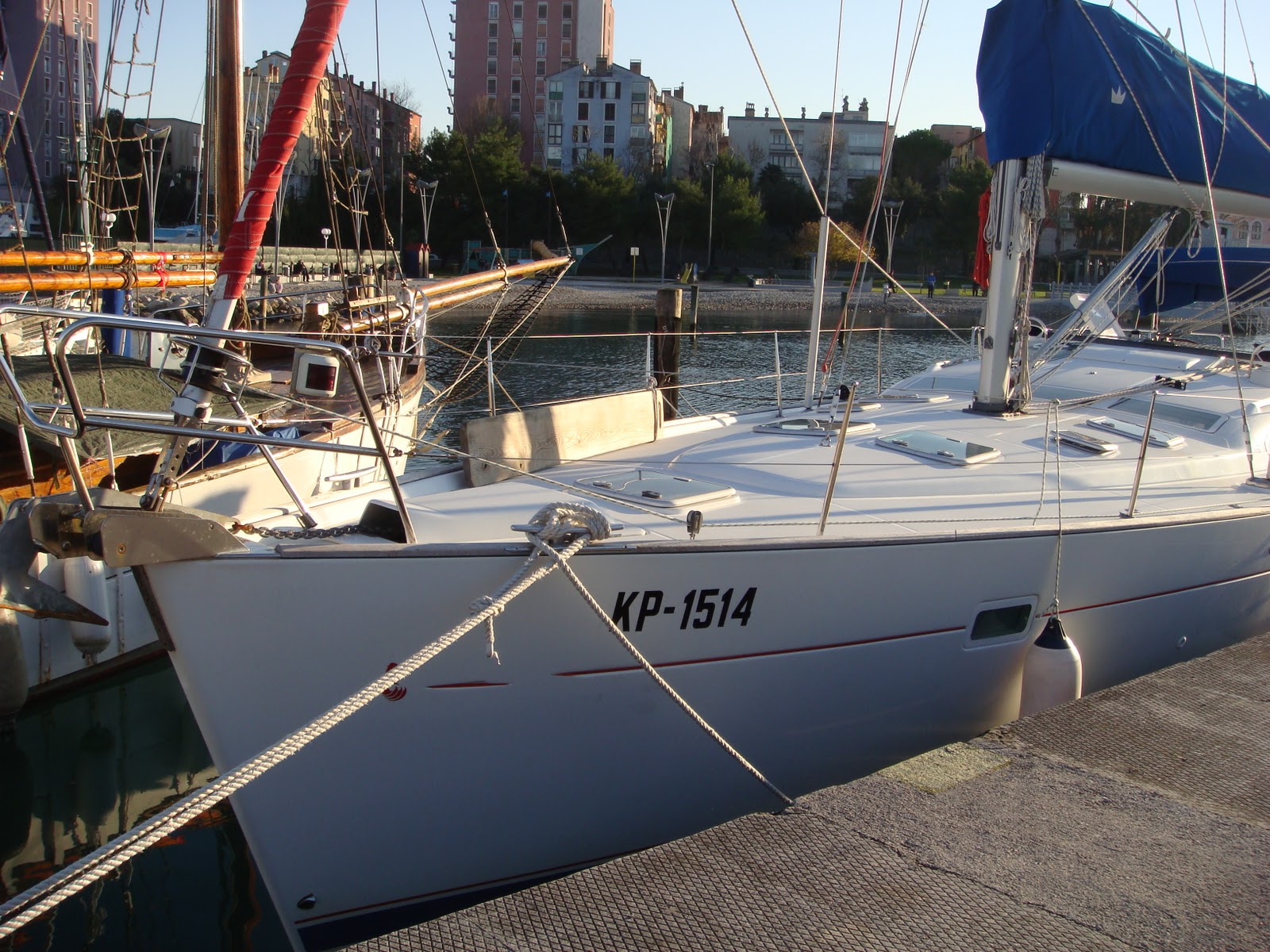 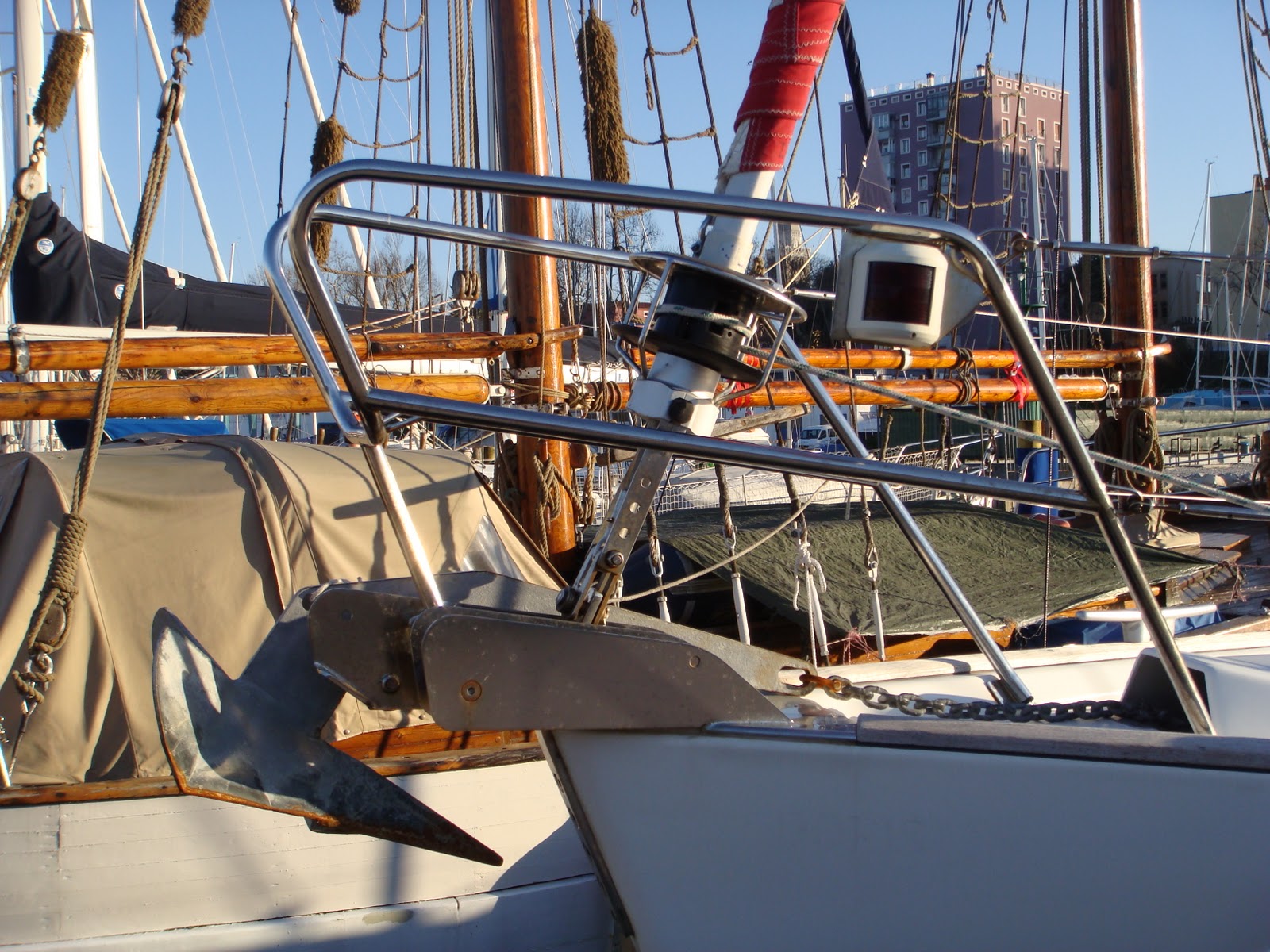 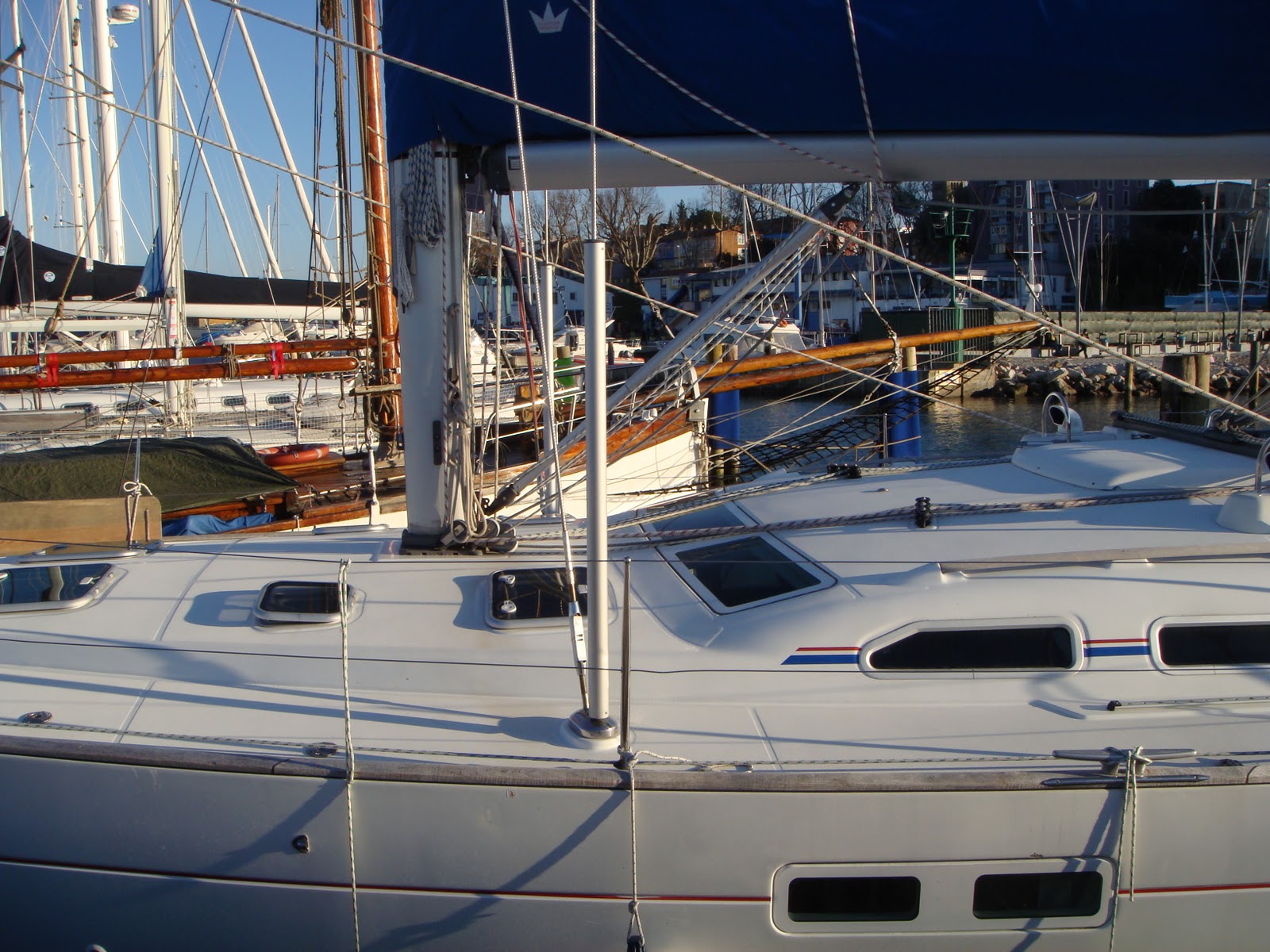 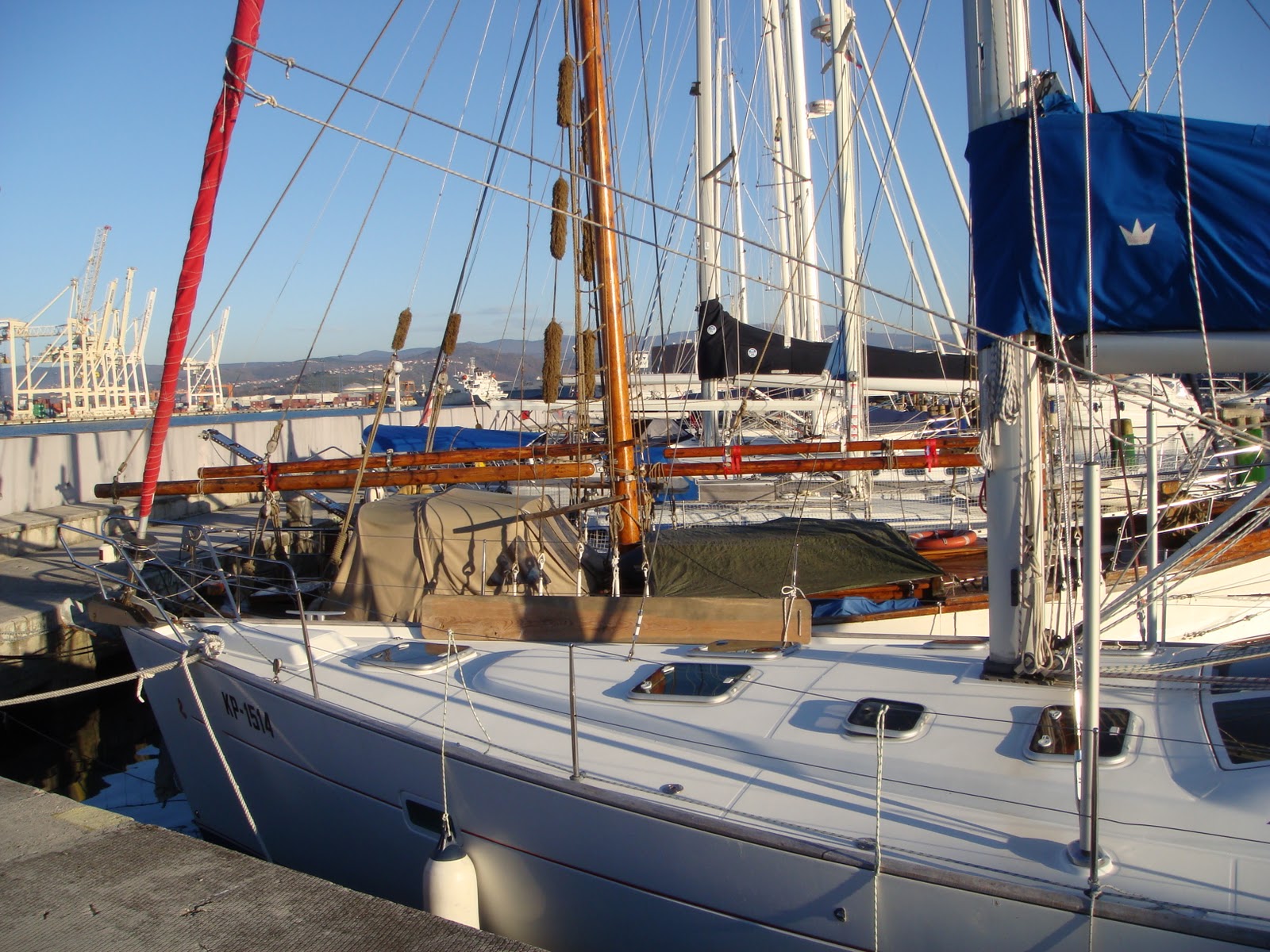 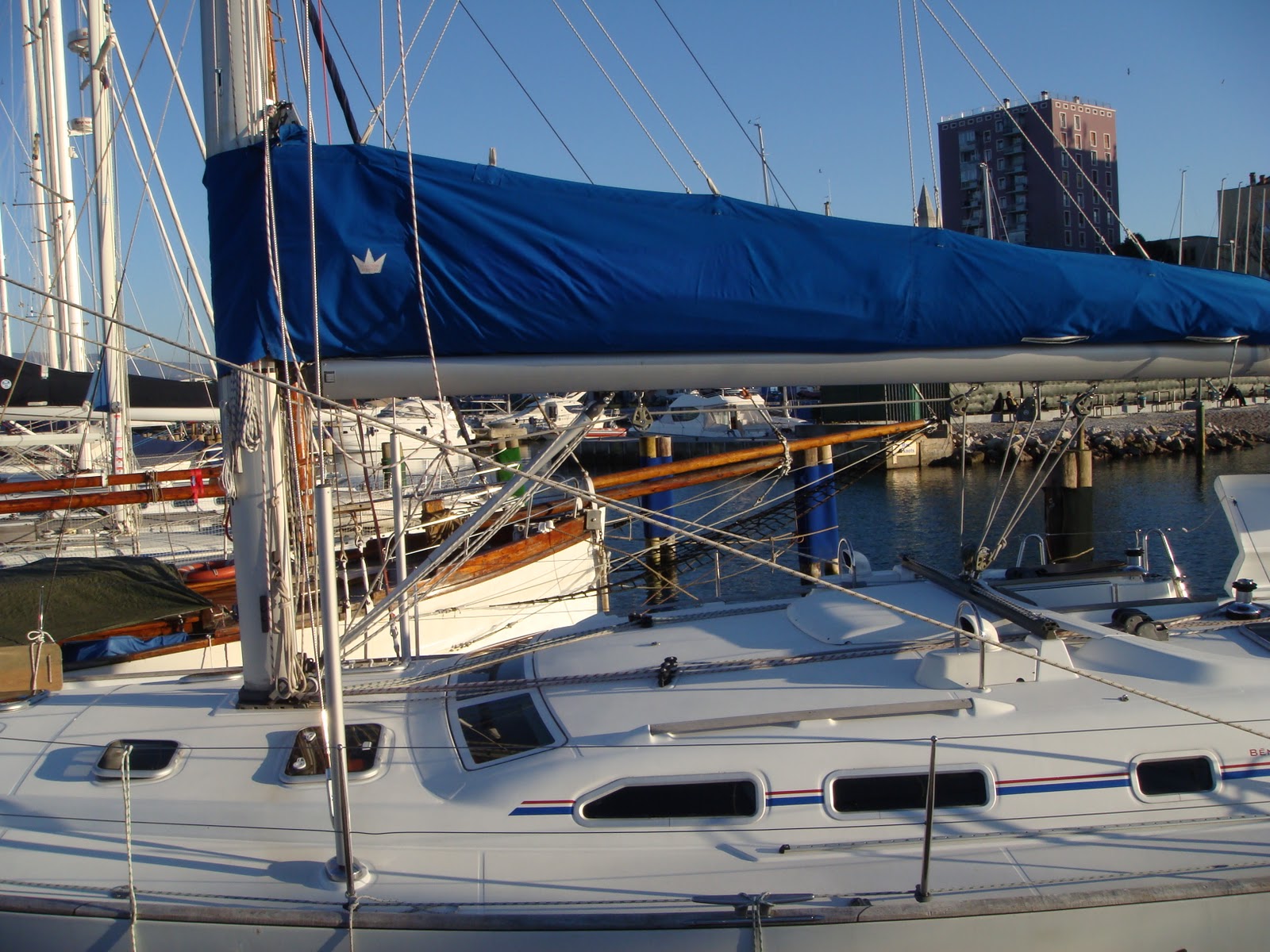 Heron was delivered to her new winter home in Koper, Slovenia.
Delivery was done in the last three days of October 2010.

She is currently undergoing a major refit and upgrades to enable her to travel in style and comfort to distant destinations.
Here are some images from her delivery from Split, Croatia to Koper, Slovenia.


It all started on custom's pier in Split. Customs formalities are not easy when you want to export a boat. We were lucky as Sunsail helped us and prepared the paperwork, so formalities were done in one day. Next to us was a sailboat bound to Greece and they were there already 3 days. When we left they were still there... 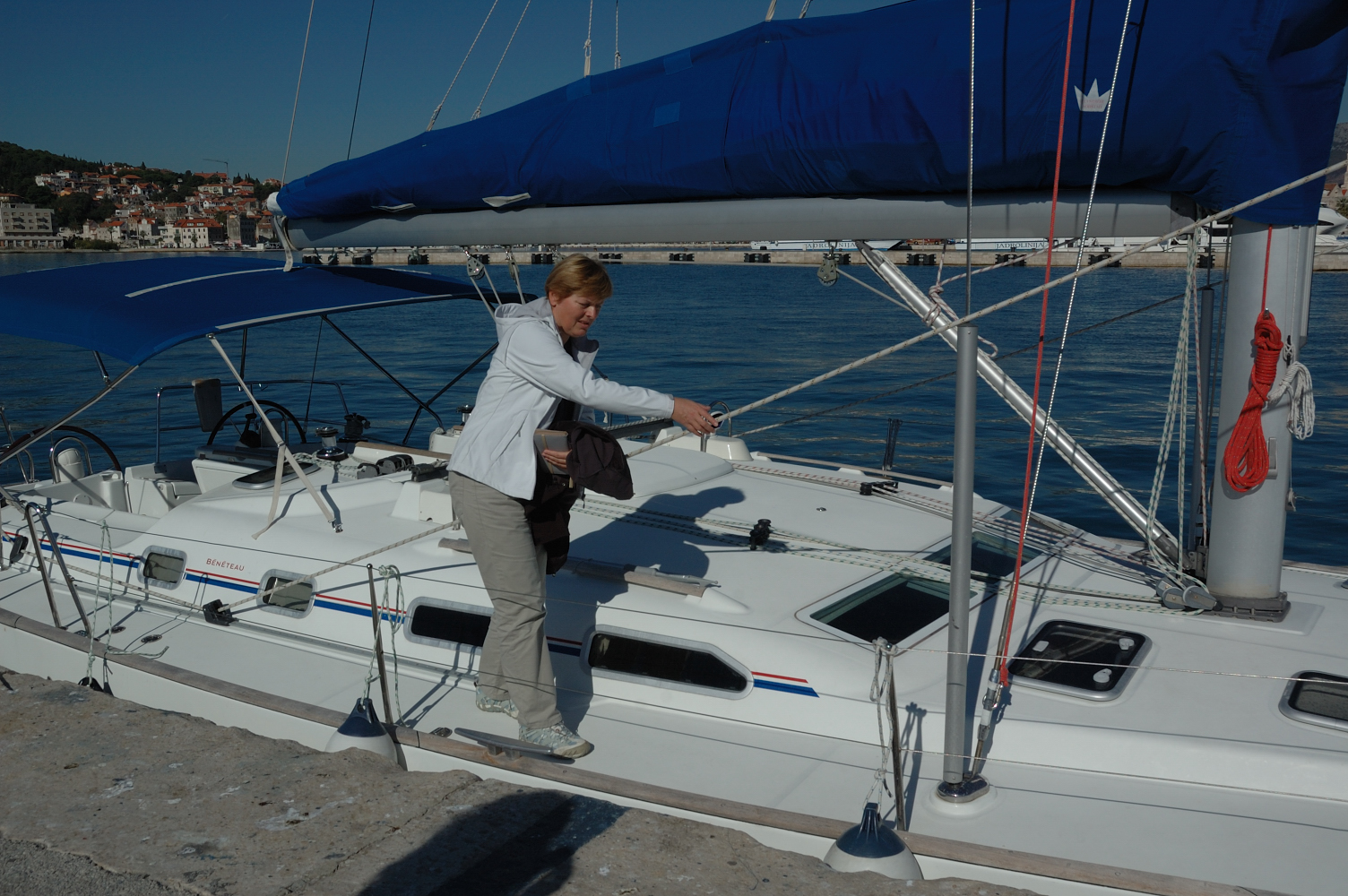 Paperwork is done, here we go.
After a week of strong Bora the wind has died and the sky was blue, so we were motoring for first few hours. 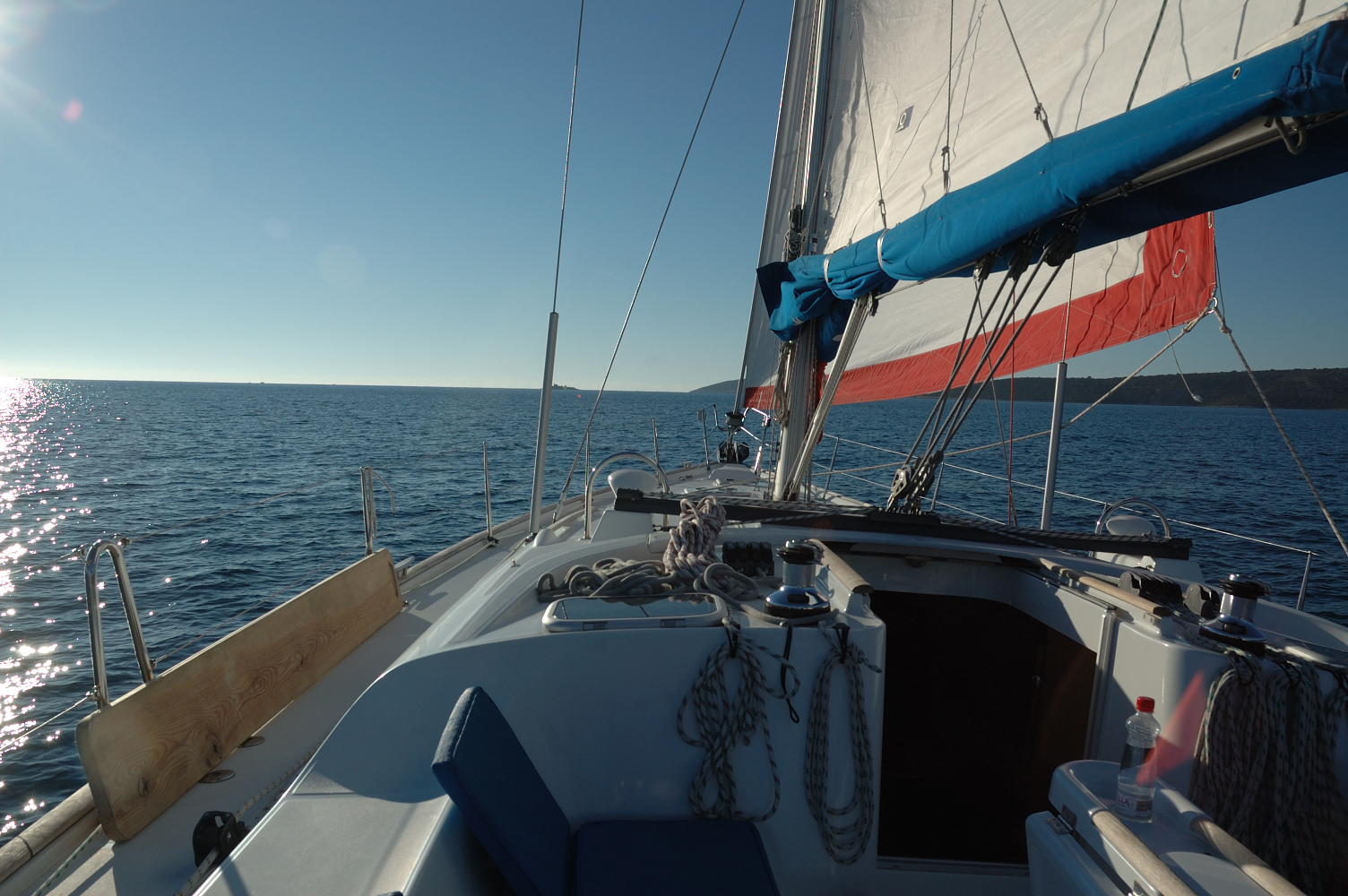 Later in the afternoon there was little wind, but we sailed as long as we could. One more check on the lines while we still have daylight. 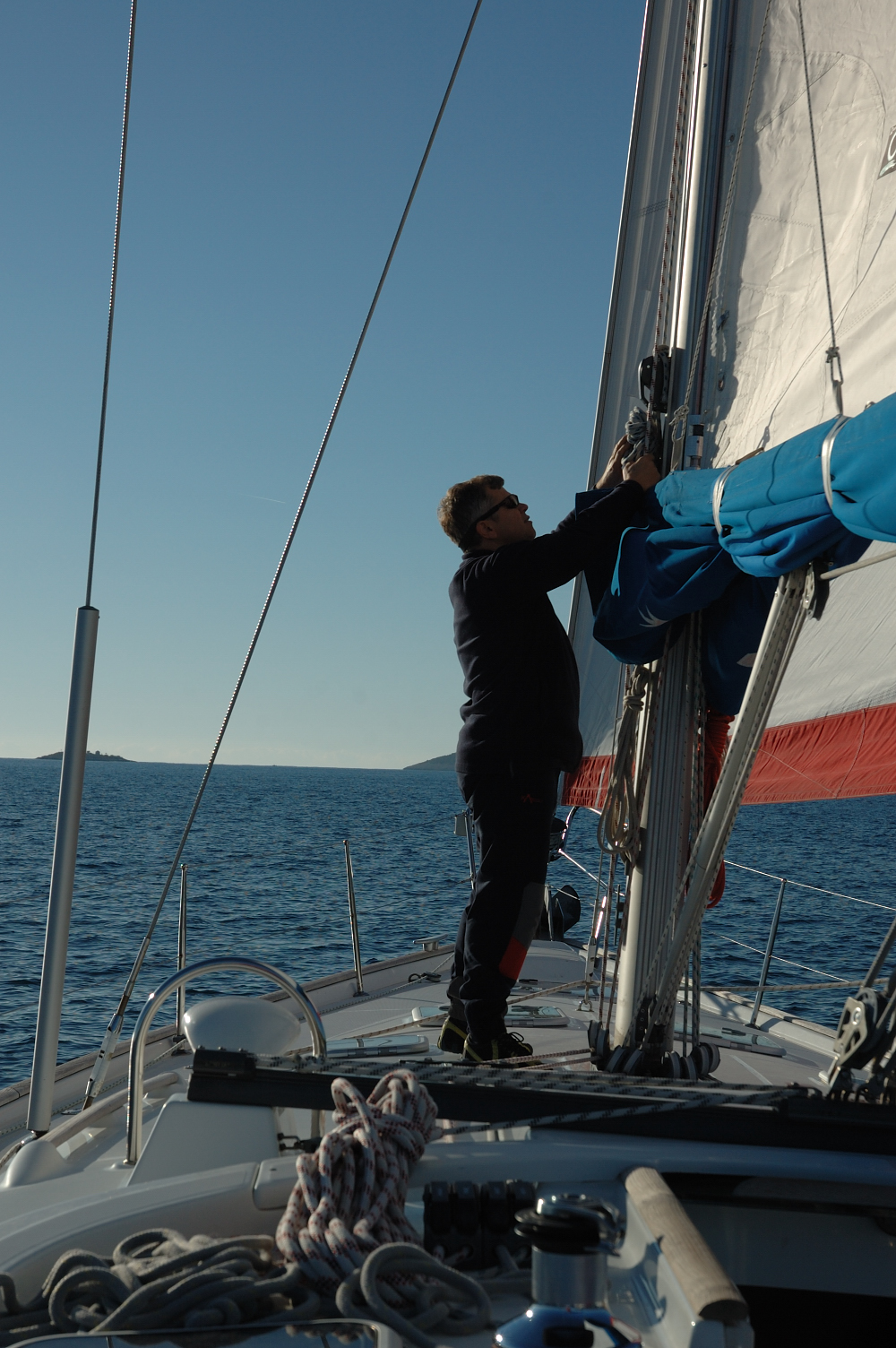 It is decision time: Shall we go via open sea or inside the island chain. Outside is easy to navigate, inside we are partially protected from the swell, but must navigate some narrow passages at night. The wind Jugo  is forecast, which bring large waves, but at sunset it did not start yet. We have at least 10 hours before large waves develop. So we decided to go on the outside. 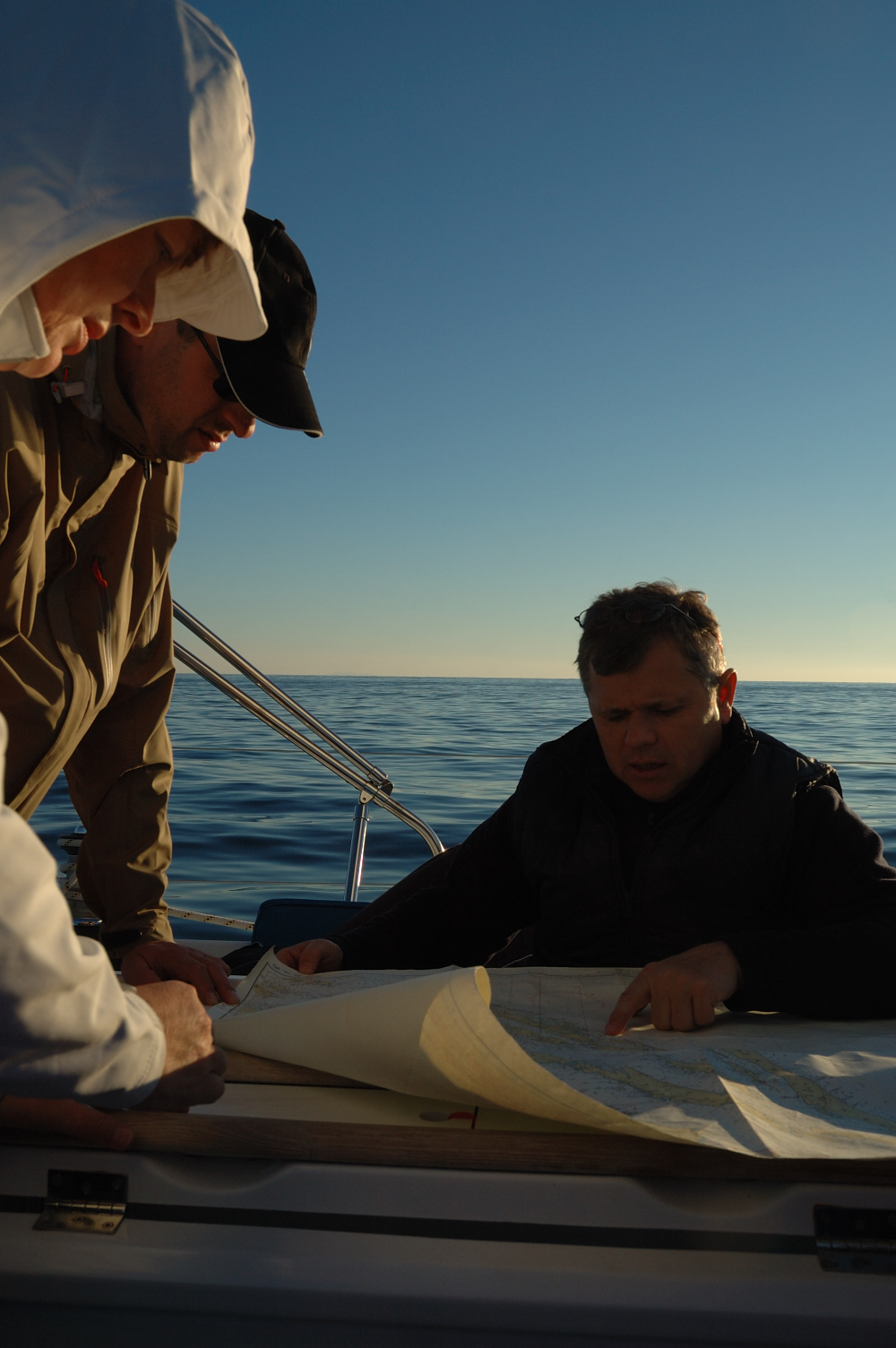 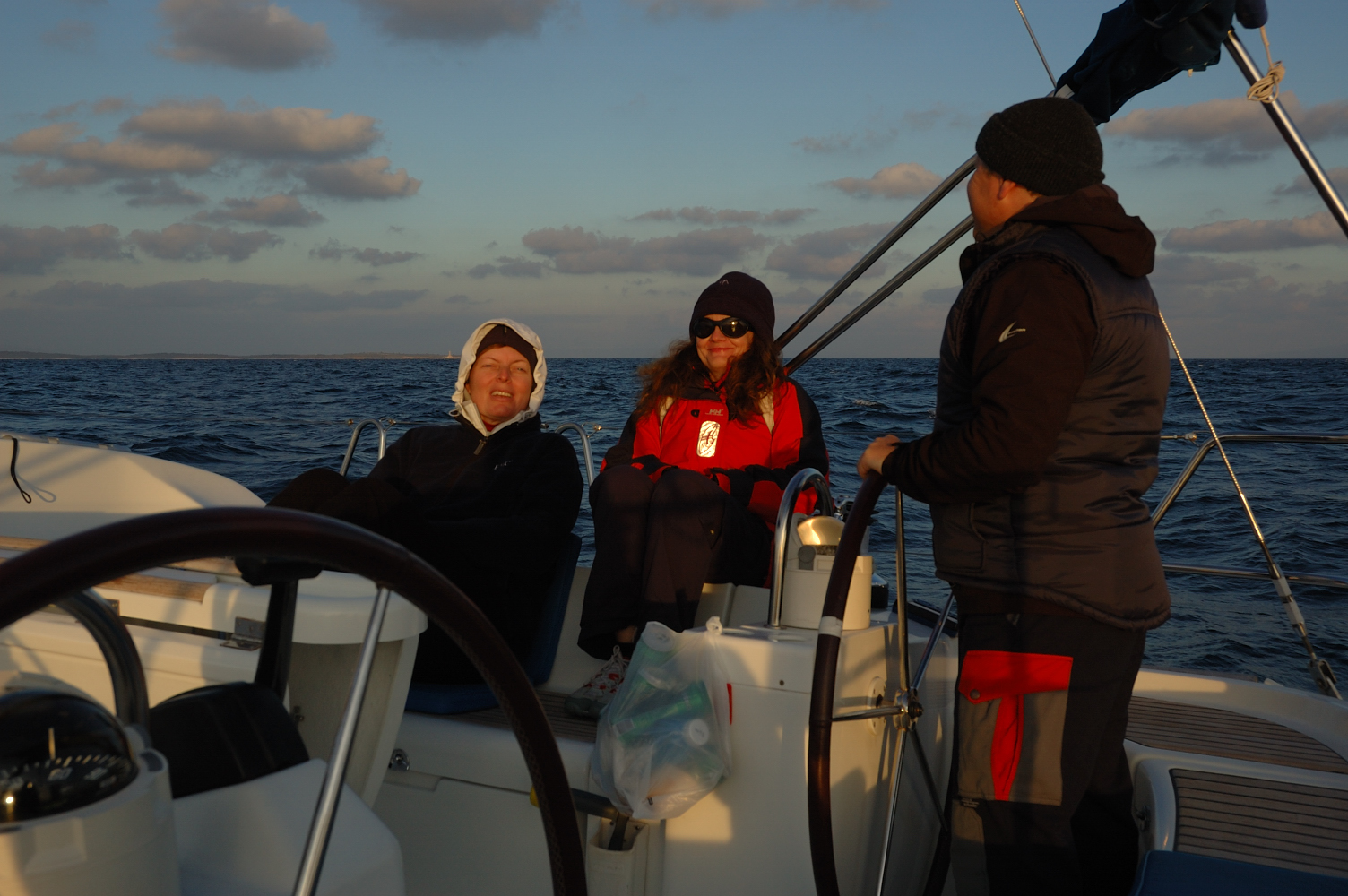 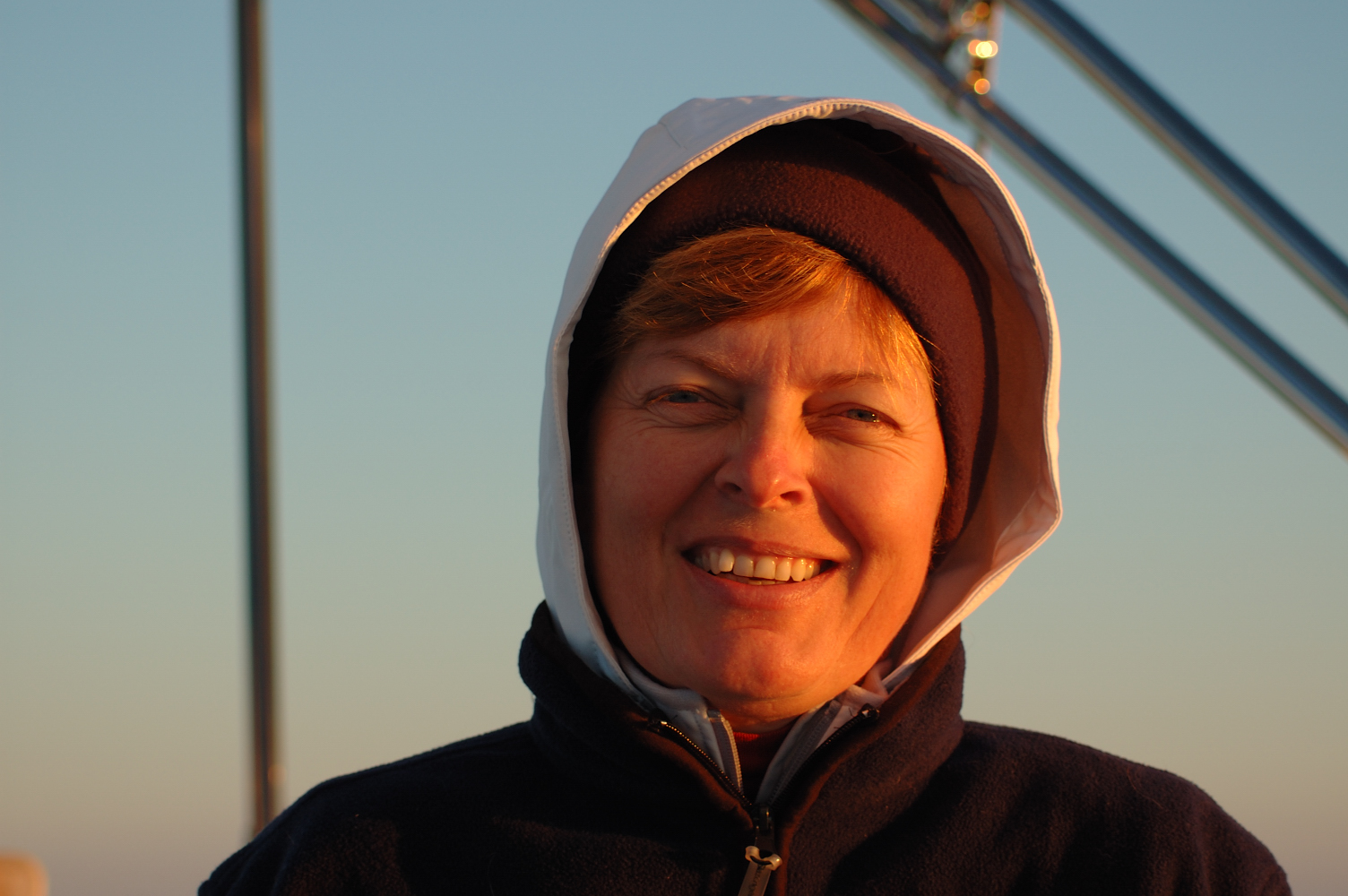 At sunset the wind died, so we lowered the sails and motored easily through smooth water. 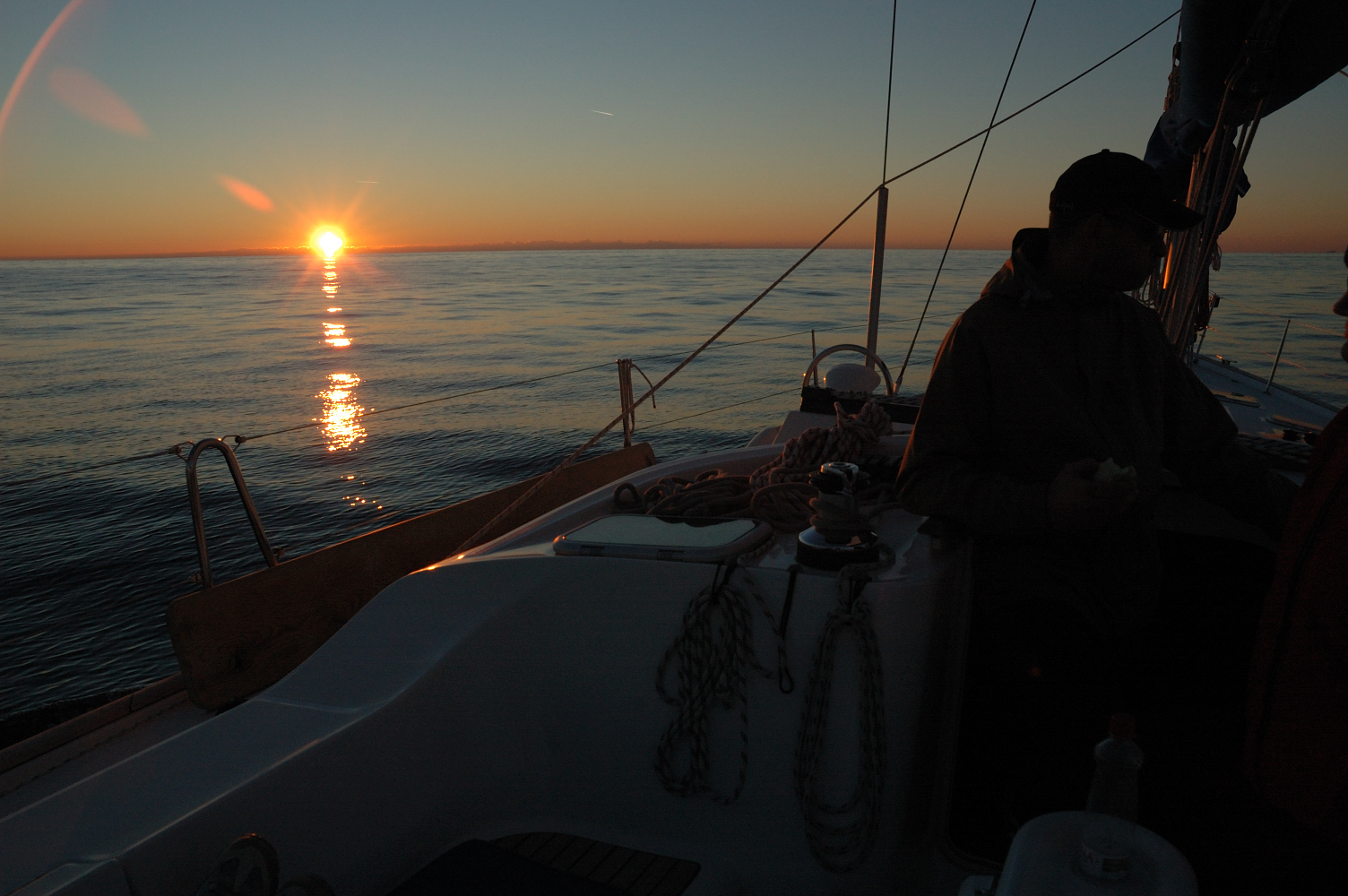 The night was so beautiful, that no one took any picture. At around midnight Jugo (SE wind) picked up, so we killed the engine and sailed NW. The see was so smooth that we were even running wing on wing for a few hours. When the wind have build up some sea we changed the course and sailed on a broad reach. Easy and fast, people were sad when their shift ended. We were 6, so we had an easy schedule working in pairs with 3 hours on and 6 hours off rotation. That is the way to sail. The boat proved to be very comfortable.

Half of the crew at breakfast. Faces are tired, but our spirits were high. The boat was so stable that we prepared breakfast as in a marina. On the picture below we are doing 6 to 7 knots on a broad reach. 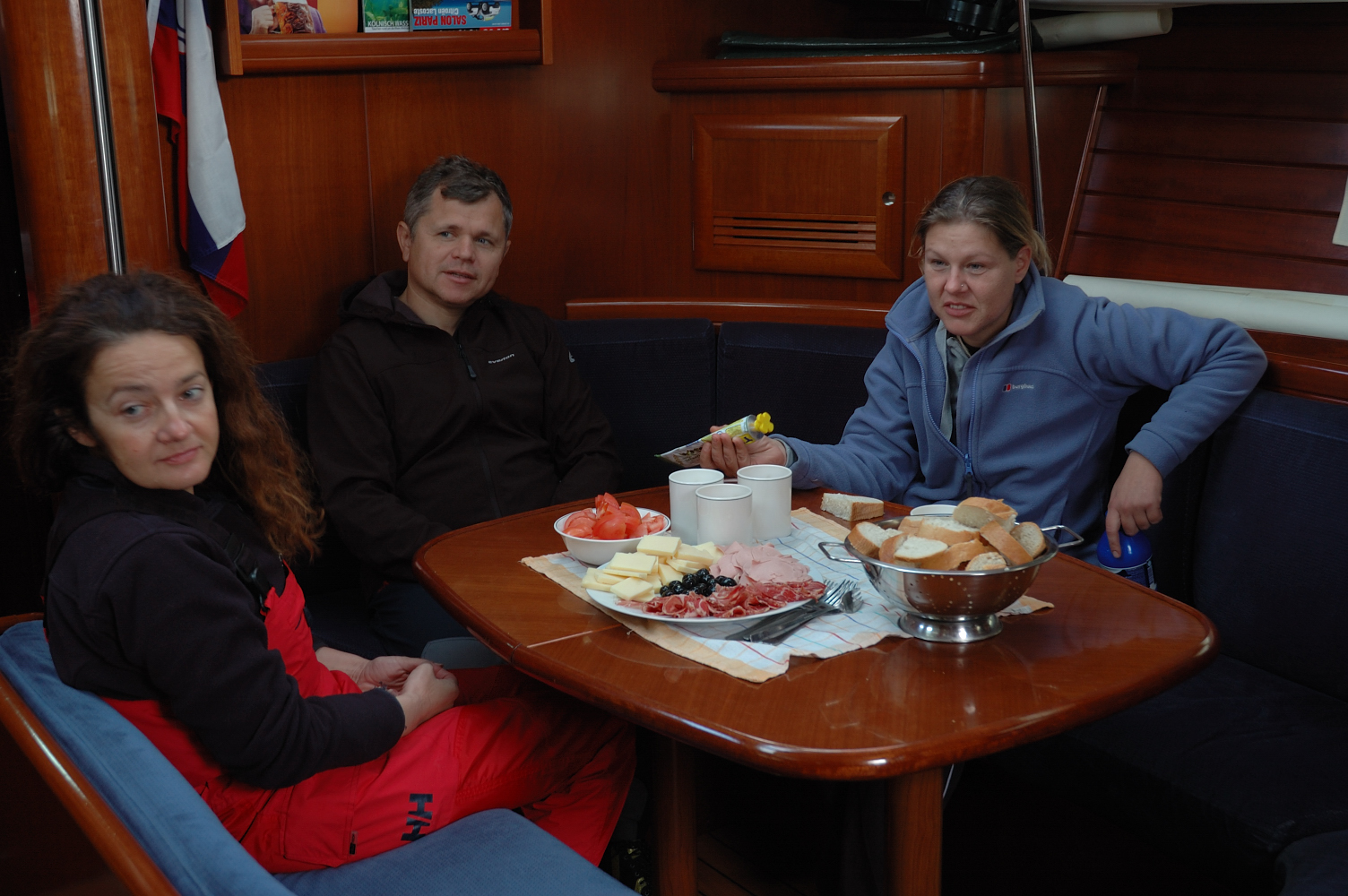 We sailed in international waters (or close) as we checked out of Croatia already in Split, so we were not allowed  to come close to land or stop. The wind became stronger (15 knots gusting to 20) and life was good. 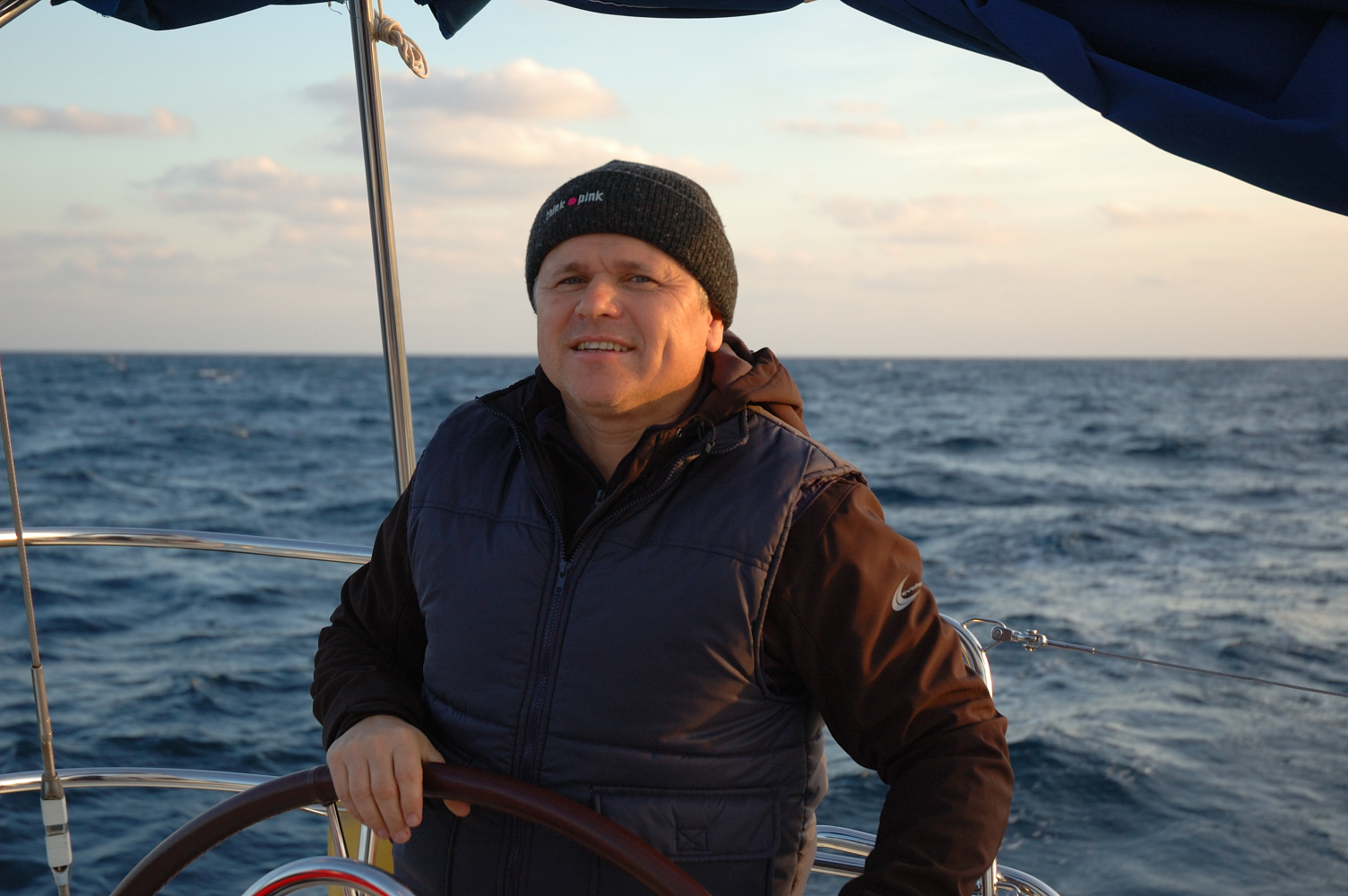 Land HO. We left Friday afternoon, we are now little more then 24 hours on our way. On the picture below is lighthouse Porer. We were doing steady 6 knots and we were a little ahead of our schedule. 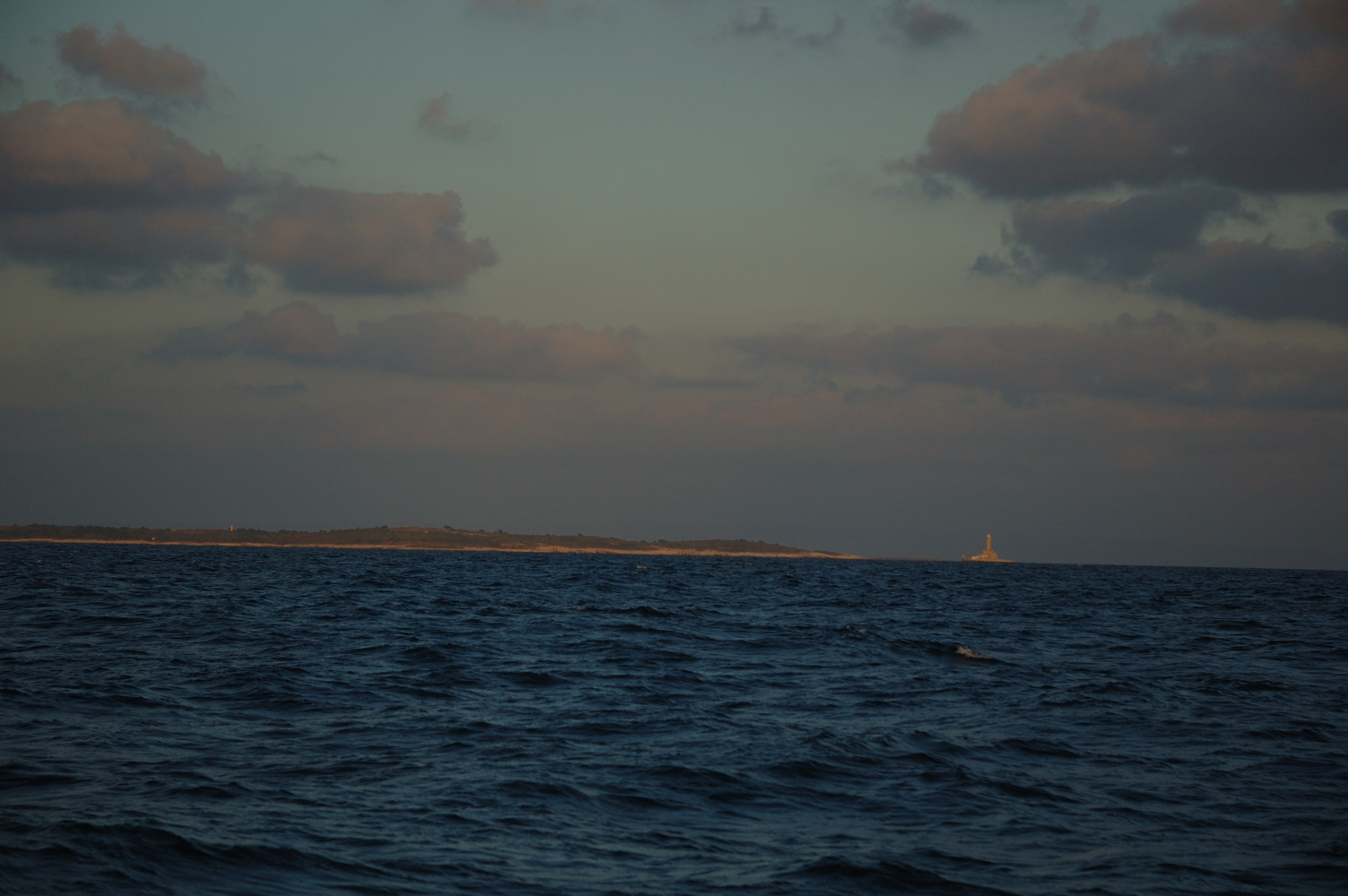 We turned the boat closer to the land. Weather forecast was calling strong winds (45 knots) and warning was issued by Croatian port authority. We used this warning as excuse to come closer to land. Even after checked out one may seek shelter if vessel or people are in danger. We were not at all in danger, but the official warning gave us some "right" to sneak to the shore and we anchored in a small protected cove. We did not leave the boat, but we had an excellent dinner and  good sleep.

Next day the wind was strong, 25 to 30 steady with gusts to 40 knots - forecast even warned about stronger gusts. They mentioned something like 60 knots. Well, most we saw on our instrument was 37 knots apparent when running at 7 or 8 knots, so it was not more then 45. 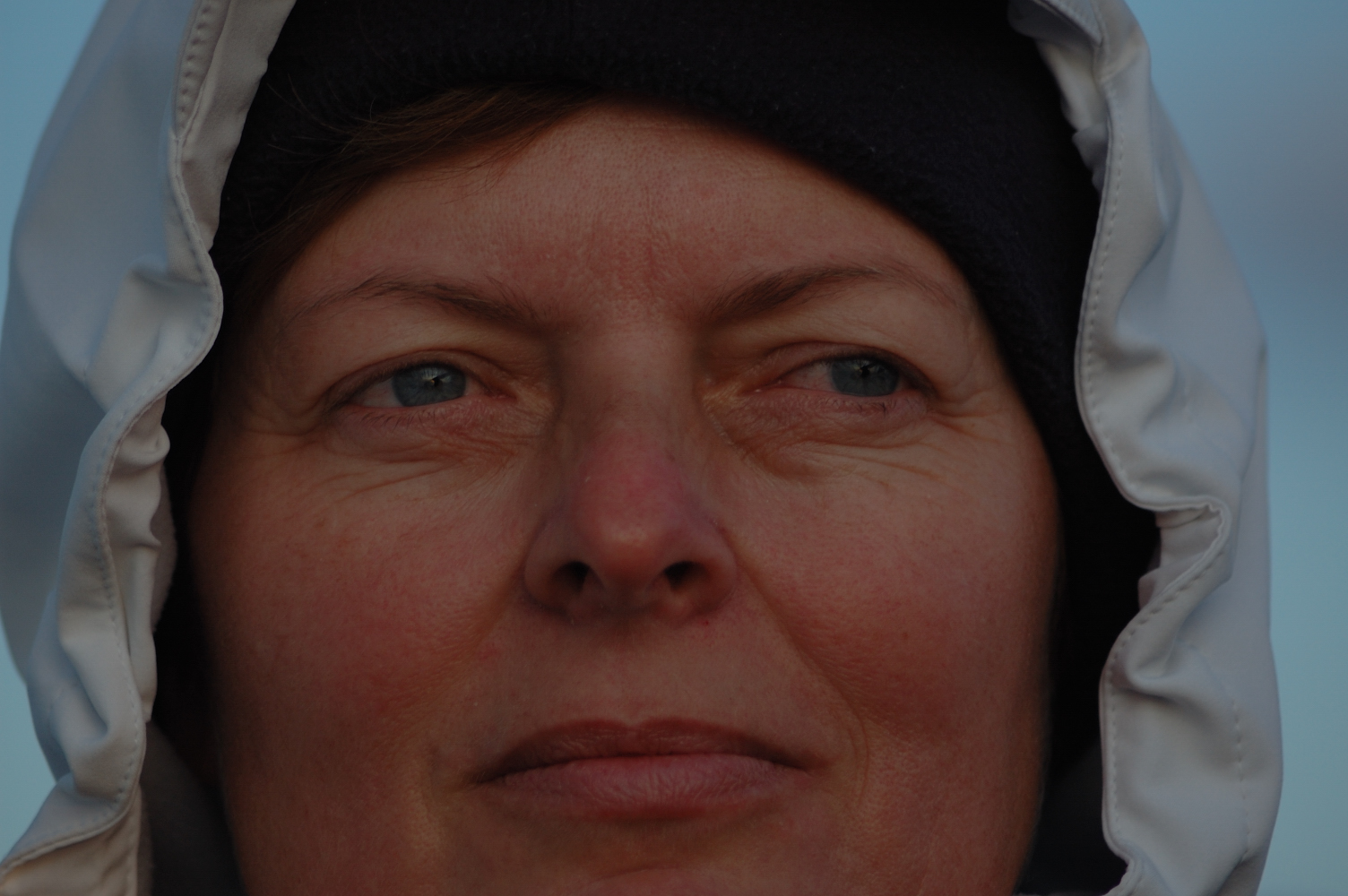 I see more joy on admiral's face then concern. We were running, so I decided to not hoist main at all. We sailed under Genoa alone (first full then partially rolled) and we easily made 7 knots to 8 knots on GPS with occasional 9 knot mark. Life is good.Who cares if it is raining from time to time. 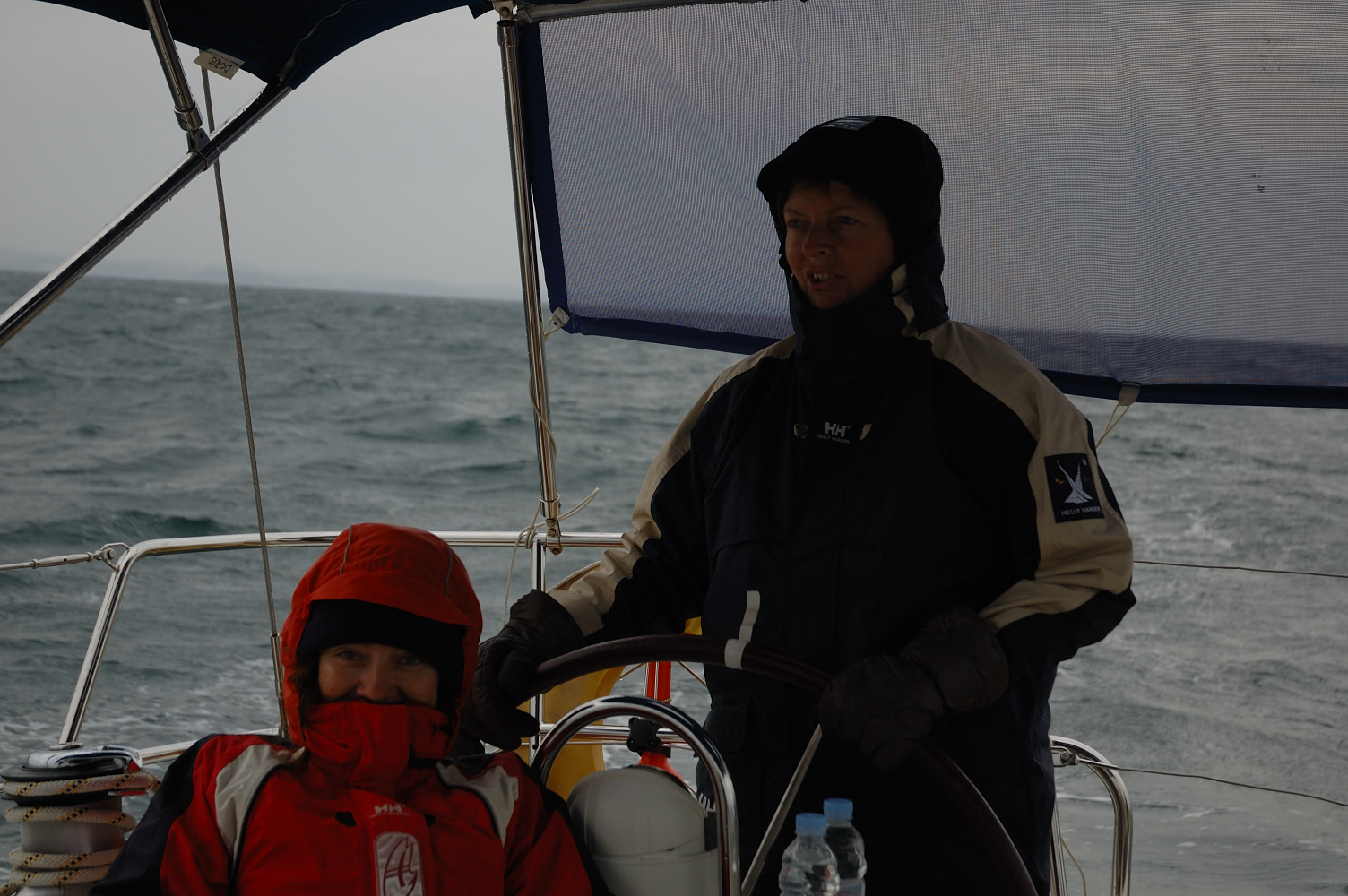 As you can see it is cold, but the admiral and the rest of the crew likes it anyway.

This was the first boat we saw on water in whole day. We are now close to Savudrija. 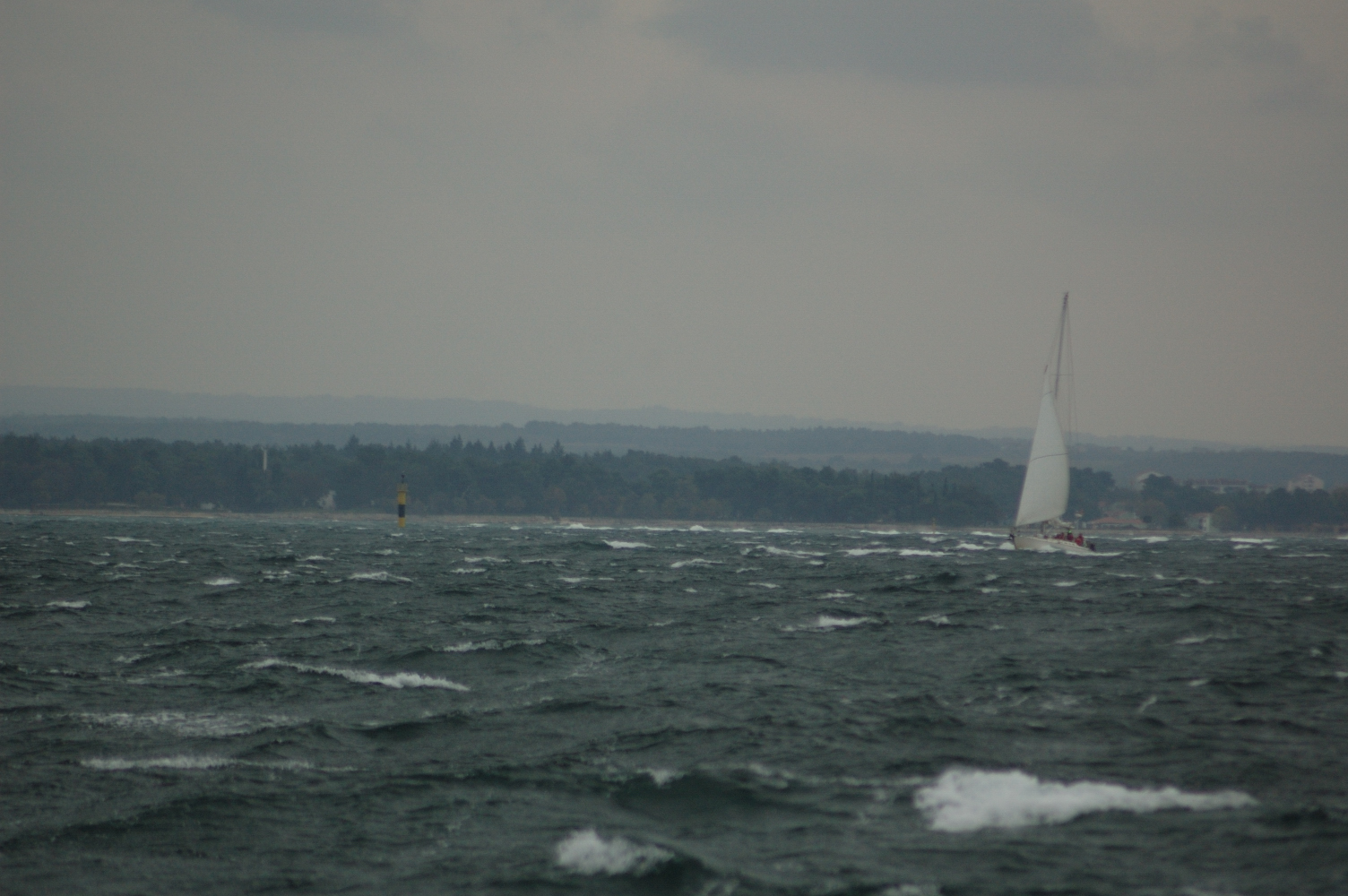 Here it is! Savudrija. The last lighthouse before we leave Croatian waters and sail into Slovenija. 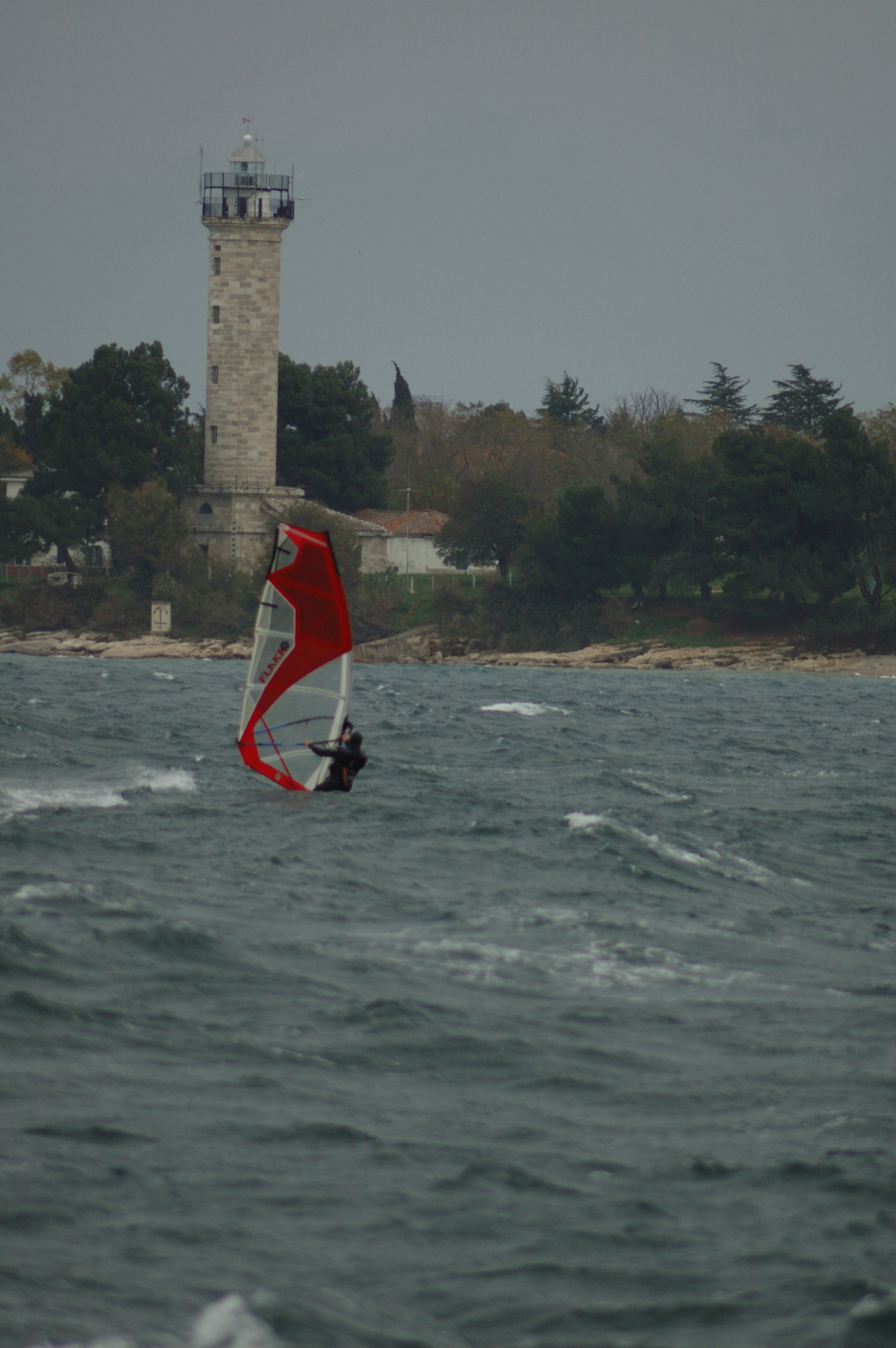 You can tell we are close to home. People are crazy. Surfers, sailboats, jet skies ... Who cares if it is November, cold and raining. It blows like crazy, so let us all get wet.
We rounded Savudria, and went from running into reaching. Still under reefed Genoa alone. No main. We rounded Piran peninsula and changed the course to E. Wind was still SSE, so we were beating at about 50 deg. true. Still no main, the boat behaves great.
We have no pictures, we enjoyed the ride too much to think about camera and we had spray over the cockpit. Crazy and fast.
We moored at Customs dock, made formalities in 20 minutes (we have to admit EU did bring some good things, 20 mins is way better than three days in Split) and we were on our way to marina in Koper. Oh, we all wished it would not be over. We started Friday afternoon, arriving Sunday afternoon. 200 nautical miles in 48 hours, not bad if you take into account that we anchored during second night.
Posted by Heron at 8:21:00 PM No comments: