We stayed in Uvala Kasjun on Šolta the whole day and another night. It was really hot, so the only option to cool down was to spend as much time in water as possible, preferably as deep as possible.

The bay was really pretty and I found again so many pretty sights. There were lots of Hydroids, like these Morska peresca or Podded hydroids (Aglaophenia pluma)... 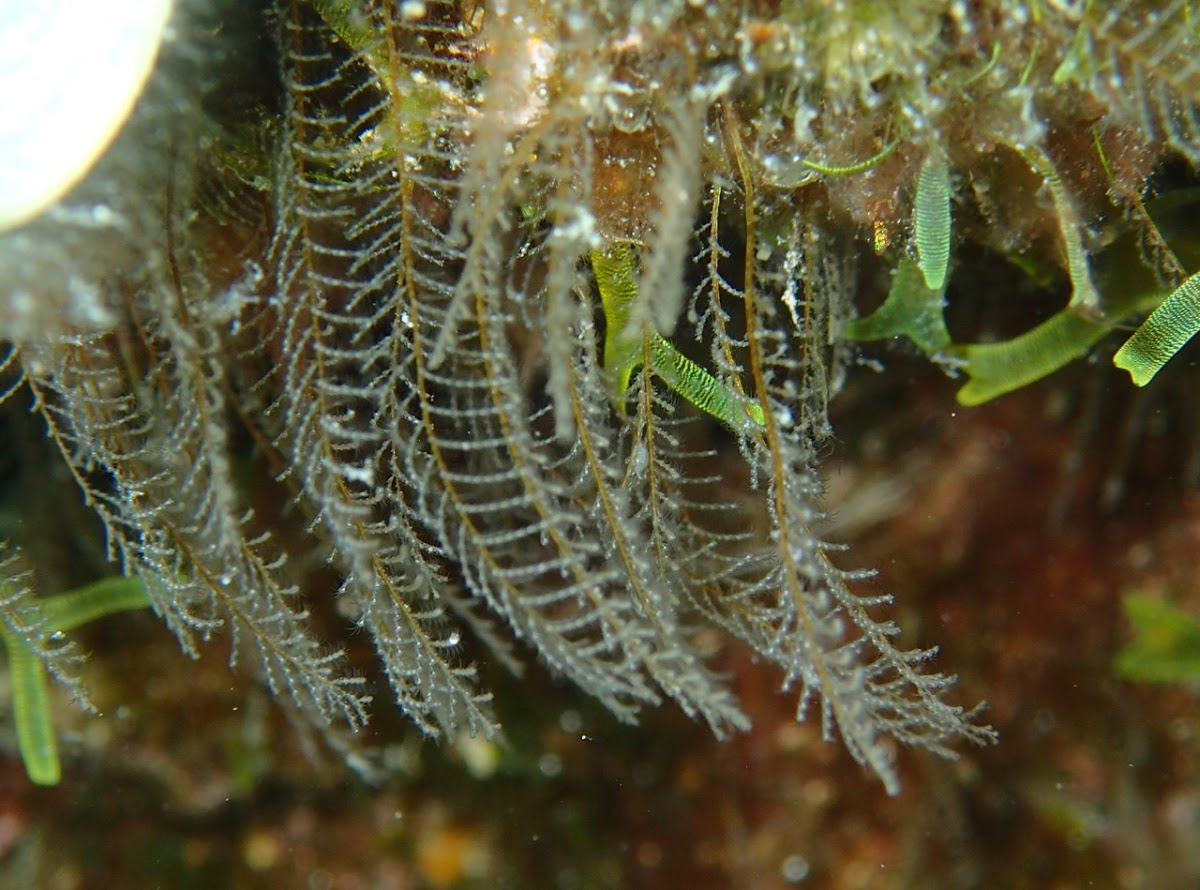 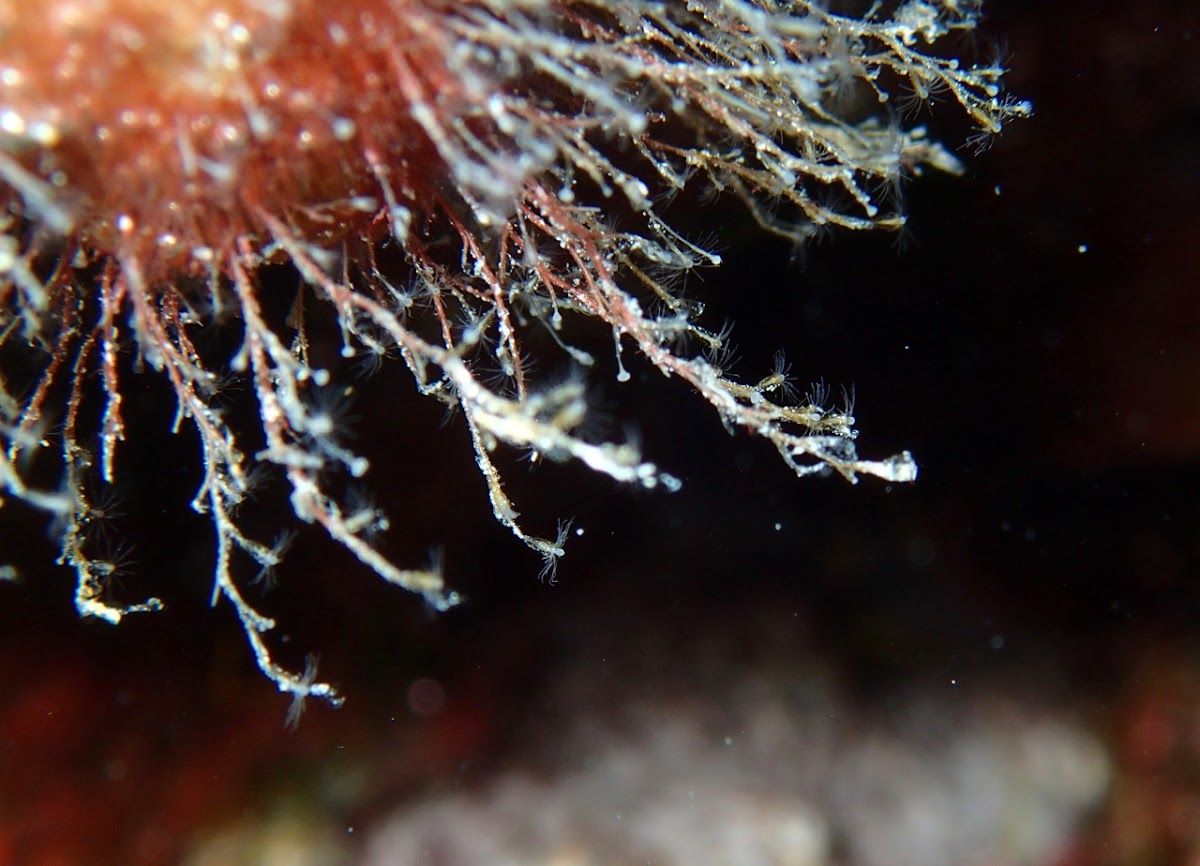 There were also plenty of these little red beauties around - it is a Rdeči sprehajalček or Red-black triplefin (Tripterygion tripteronotus). 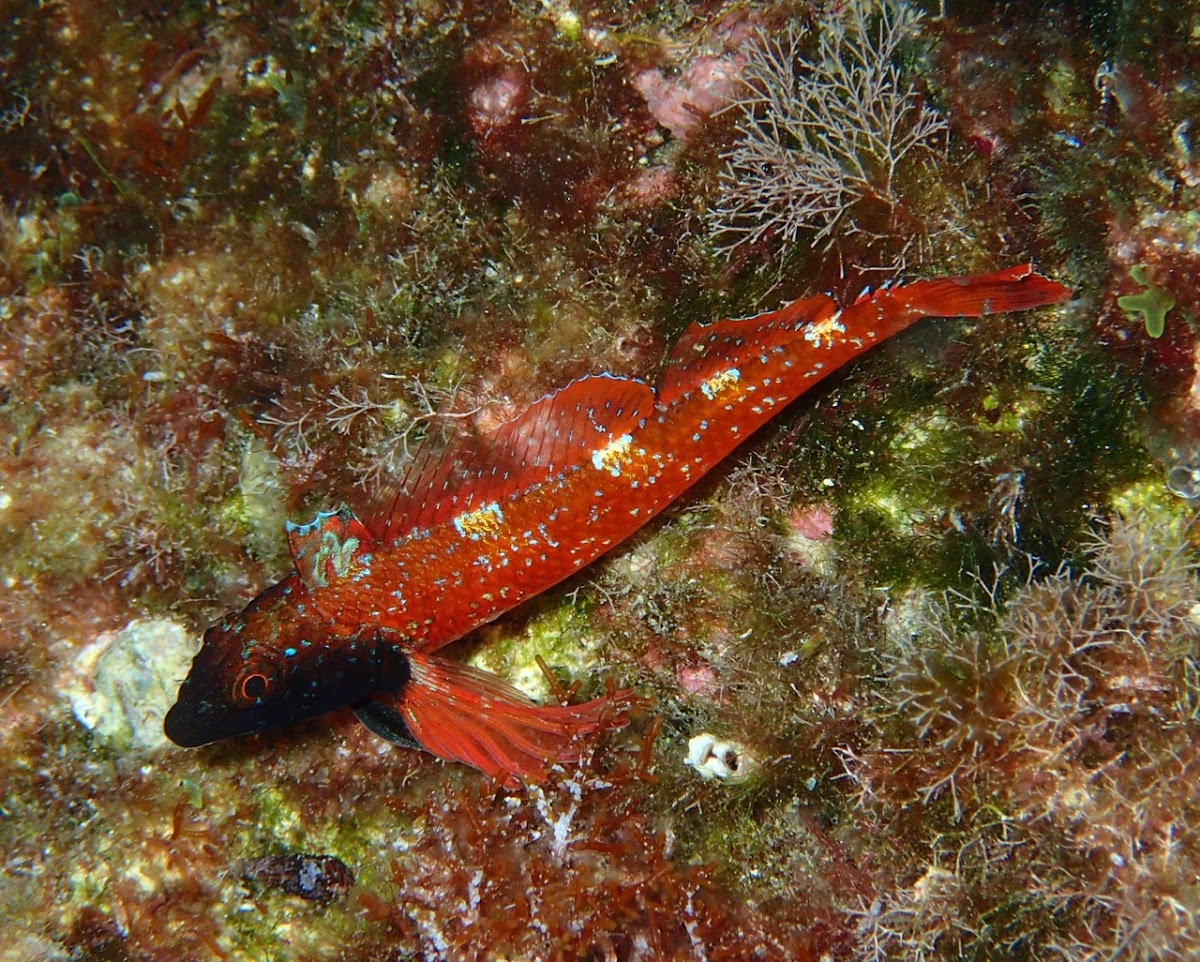 Next day it was time to slowly turn back North. We decided to sail around Šolta and in the early afternoon we med-moored in a narrow arm of Uvala Tatinja. To med-moor means throwing the anchor in relatively deep water near the steep shore and then tie the stern (back) of the boat to some big rock on the shore. It is not easy, someone from the boat has to swim or row to the shore and take the line with them, taking care they don't drop the line while the boat is usually pushed away by the wind, don't step on sea urchins while climbing onto shore and don't loose the dinghy in all the excitement.

I was already snorkelling in this bay before and it was really good. I couldn't wait to get into the water.This time I met several scorpion fish of different kind, probably more than anywhere else. This one is Mala bodika or Small red scorpionfish (Scorpaena notata). 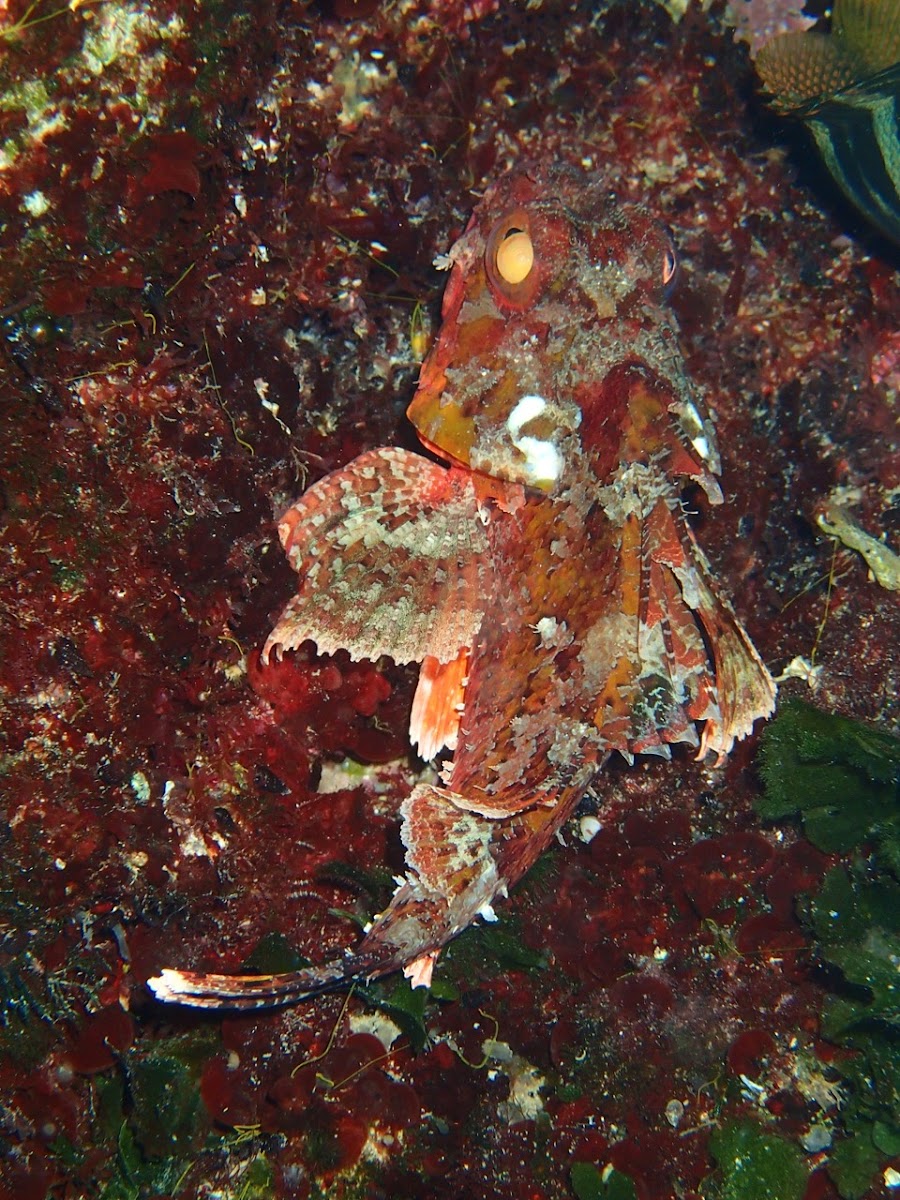 This beautiful orange lace is a cluster of eggs and belongs to a Nudibranch (slug), don't know which, couldn't find any nearby. 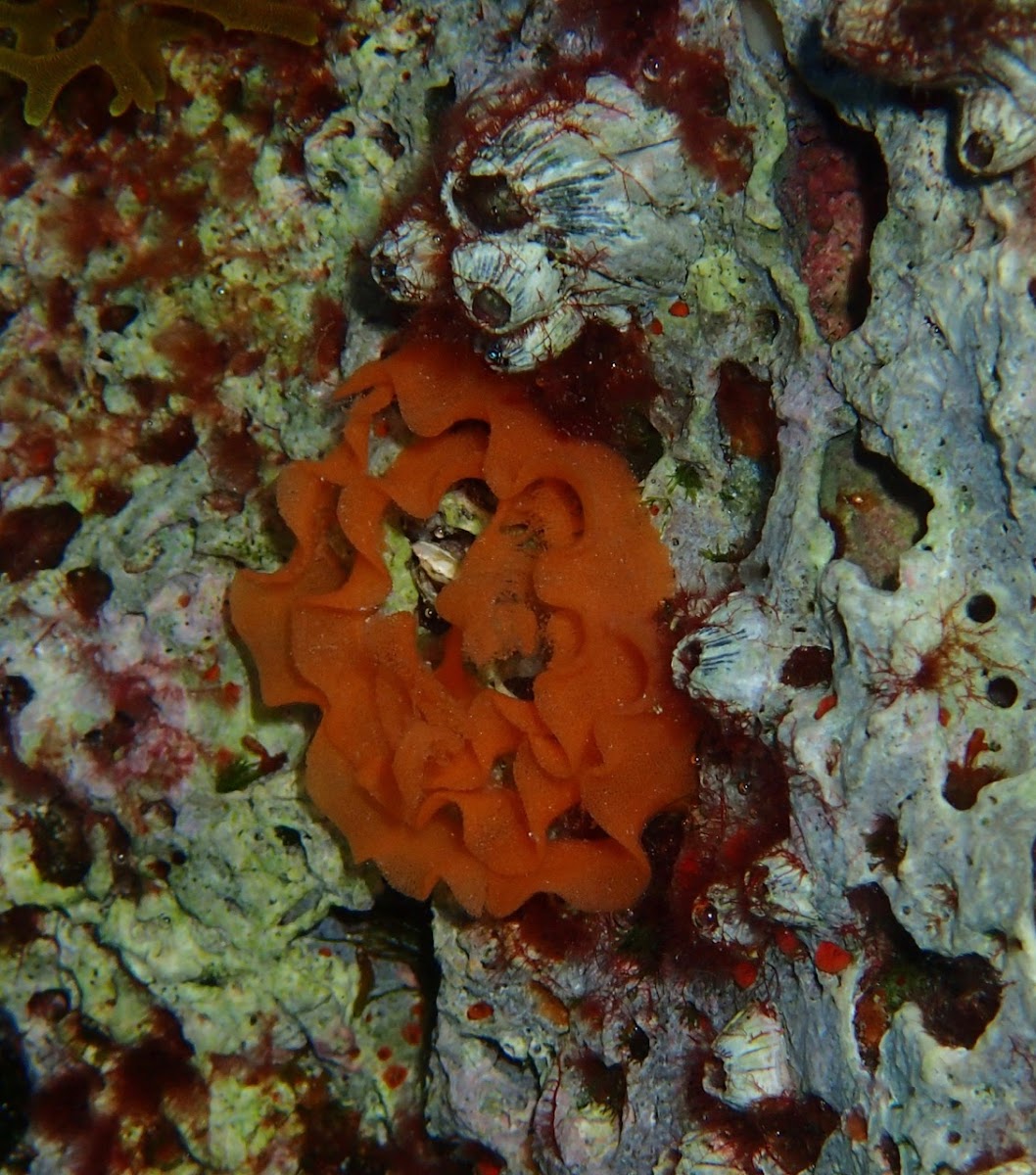 Velika babica or Tompot blenny (Parablennius gattorugine) is very common fish, but this one was a bit different with pink pattern on it's fin. 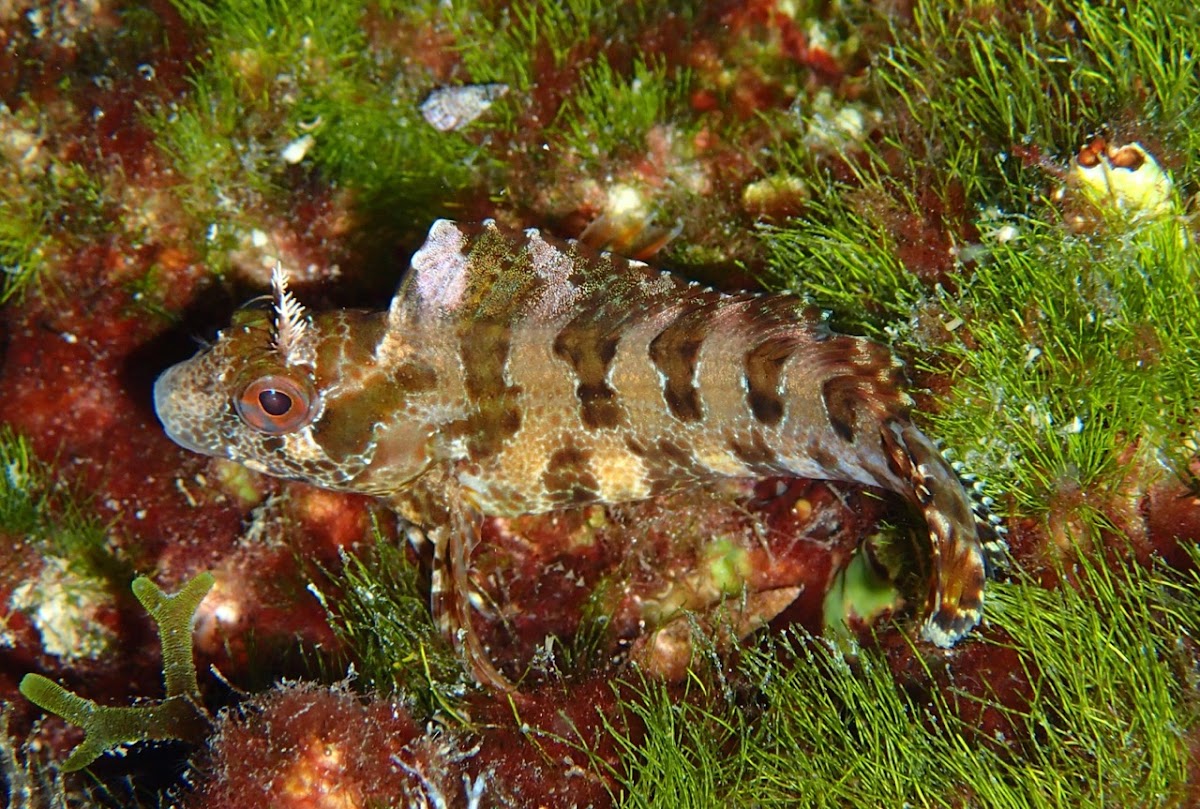 I very rarely see the Rdeča morska vetrnica or Beadlet anemone (Actinia equina) with it's tentacles out. 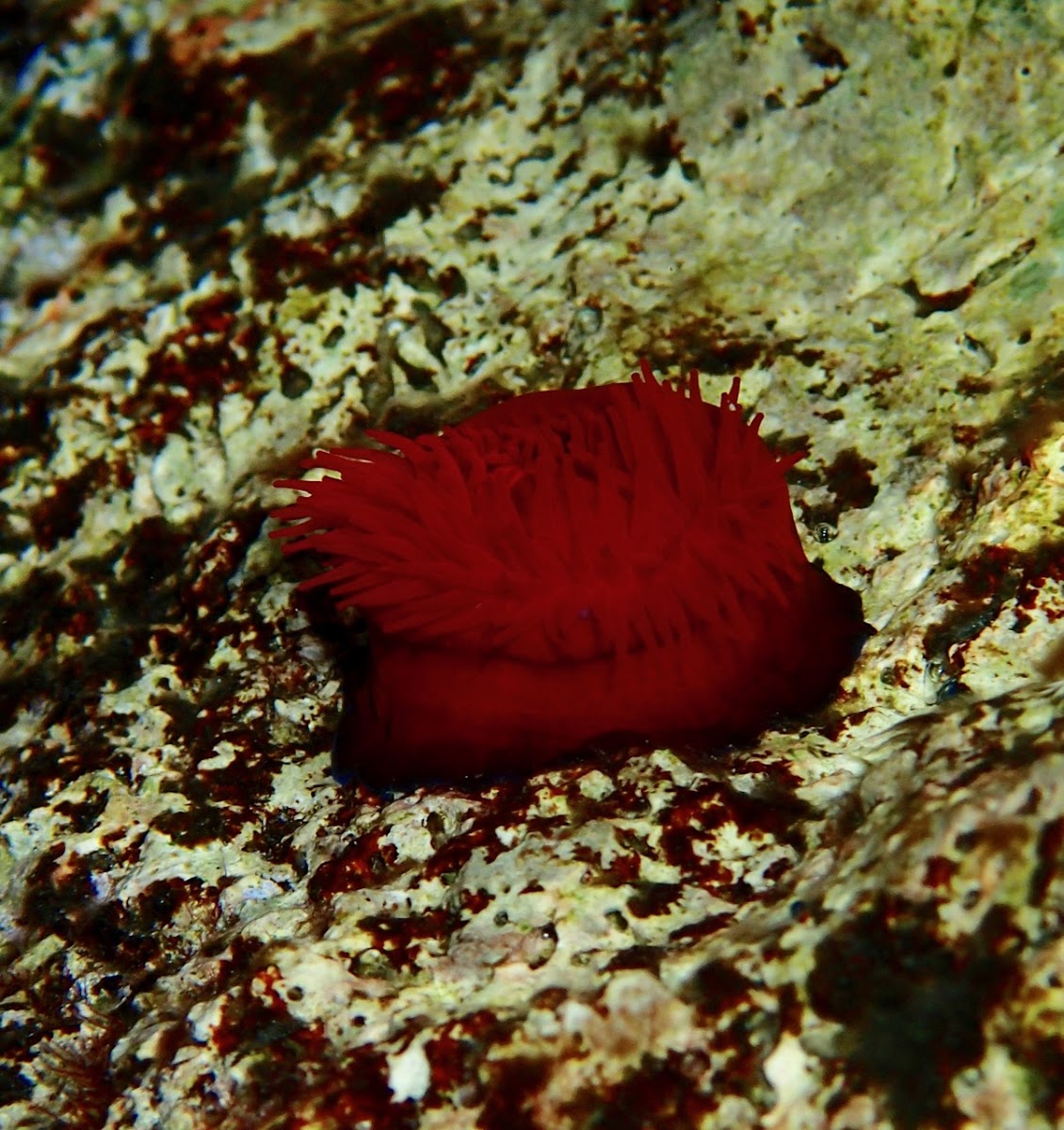 A Škarpoč or Black scorpionfish (Scorpaena porcus) up close. 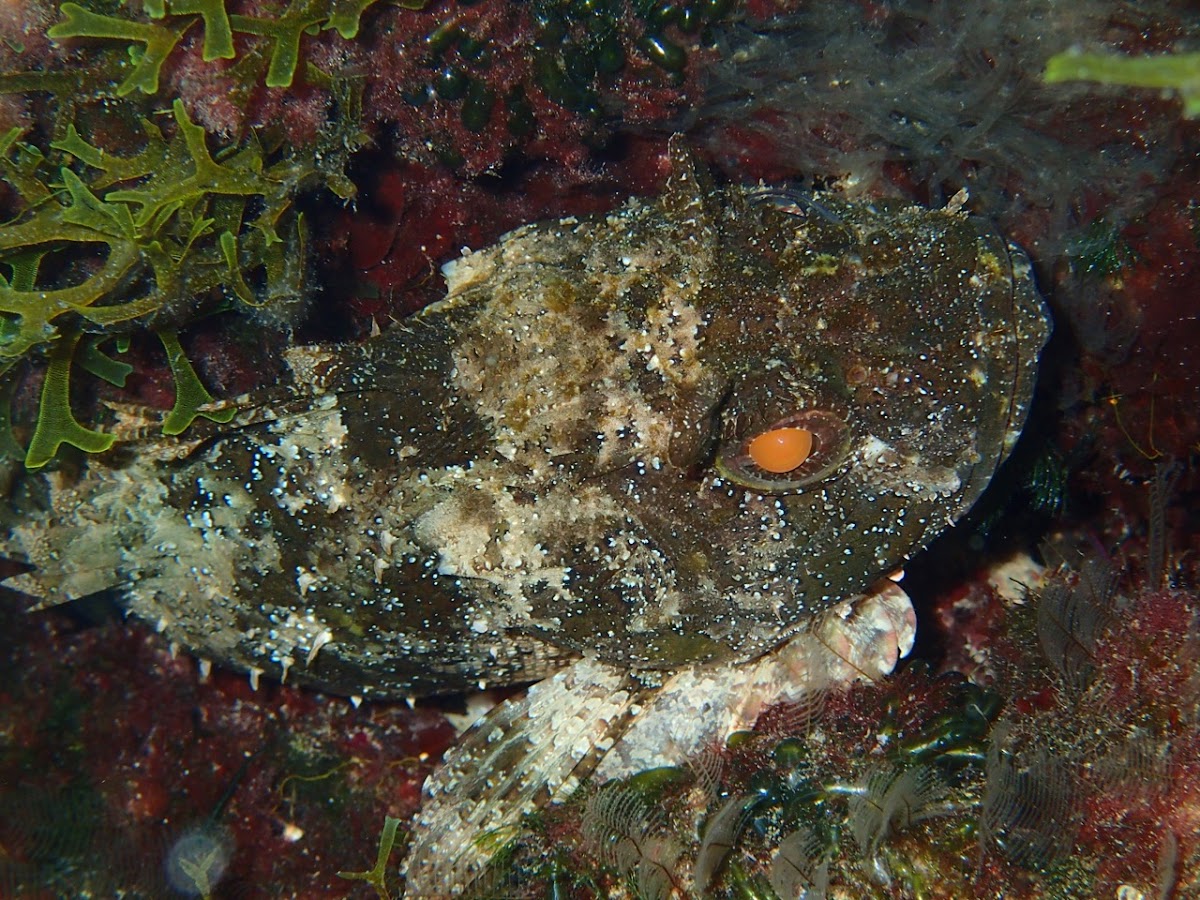 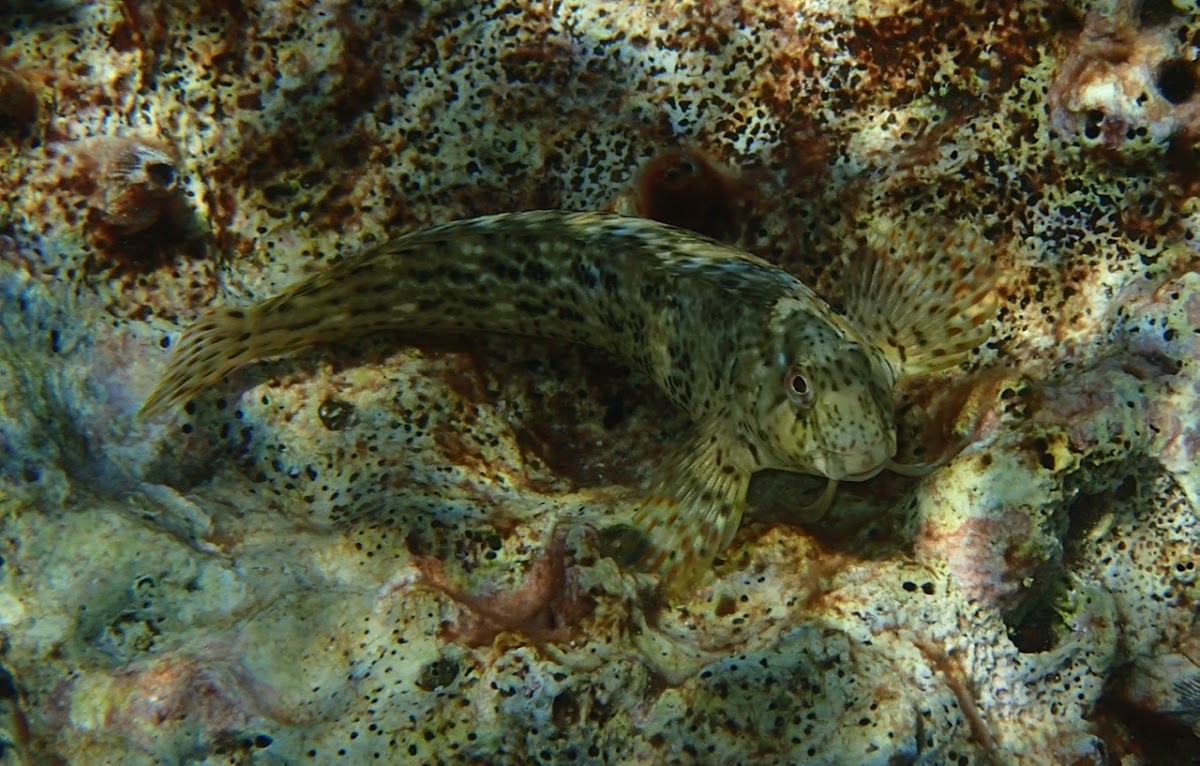 Morska pomaranča or Sea lemon (Tethya citrina) really gave me a hard time - it was hidden under a rock in a tricky depth of about 1m - it is difficult to dive down, get under a rock, try to steady oneself for taking a shot while one is pushed upwards by the water. I took a lot of photos, but none of them turned out ok. So next day we postponed our departure so I could go snorkelling again. Luckily I found the right spot and got some better shots this time, without hurting myself or damaging anything. I didn't see the scorpion fish, that was guarding the sea lemon while I was taking photos, I only noticed it later when I was checking the photos on my computer. 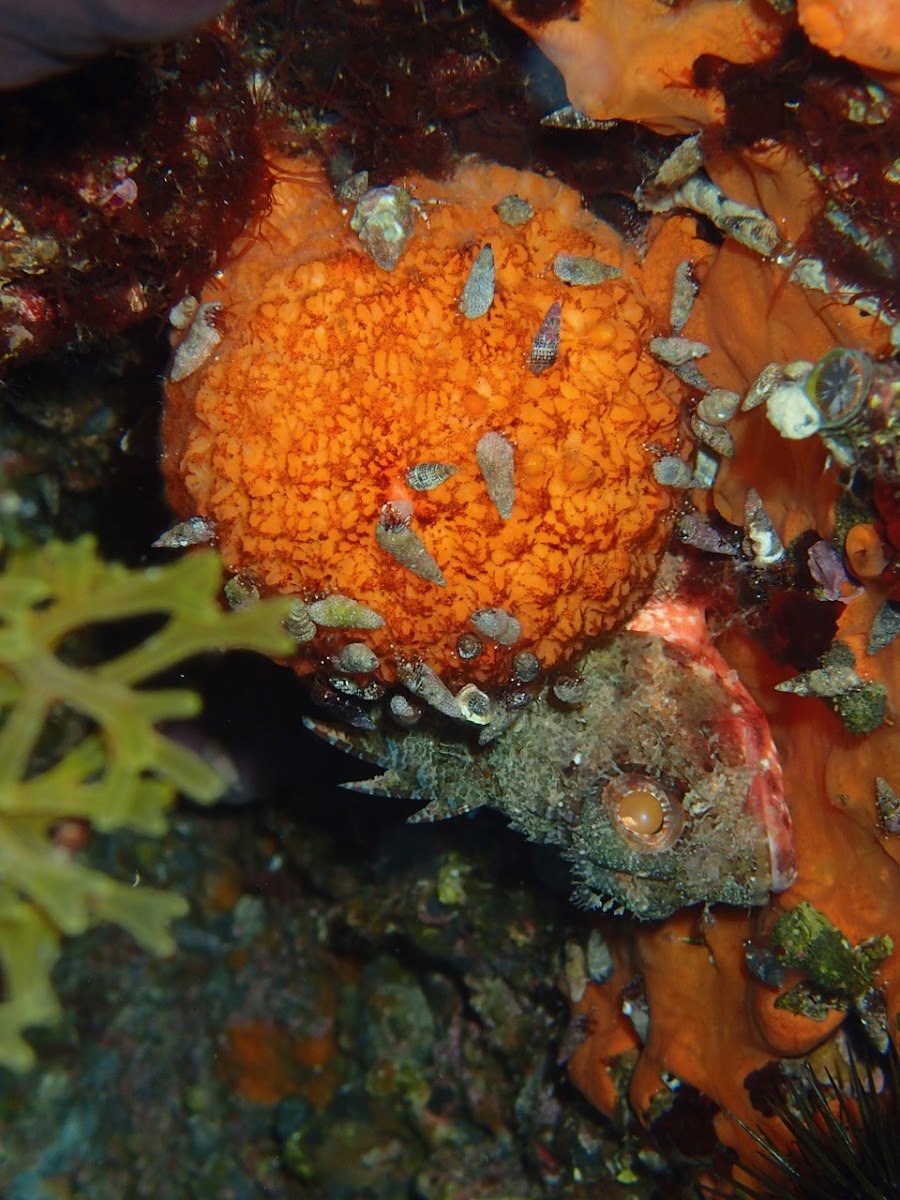 I don't find sea lemons too often, so I think it was definitely worth the fuss.

Next day we sailed to Drvenik Veli, where we anchored in Uvala Solinska. The day after we sailed to  Zlatan again, I guess we are the creatures of habit. But this time it was really crowded and loud in Uvala Zaražanj, not as pleasant as before.

Next morning we picked Captain's brother and his family in Tribunj and beside four new crew members we also loaded lots of provisions on the boat. We stopped for a big breakfast and a swim near the small island in front of Tribunj and afterwards sailed North towards Murter.  We stopped in bay on South of island Arta Mala and we decided to stay for the night. A stronger NE wind burja was forecast for the night and we thought we would be well protected there. We swam in the afternoon and afterwards cooked ourselves a big dinner. It was a nice calm evening, but it soon turned. Around midnight, as from nowhere, a strong NE wind started to blow, with gusts around 40 knots. Since we were tucked behind the island, there were no waves, but wind was so strong that it carried the spray all over the bay and boat was salty in minutes, and the gusts of wind made the boat dance around the anchor violently. While some of the crew didn't mind the commotion, some of us were getting up every half an hour to check on the situation. But our reliable anchor did it's job well.

In the morning it was still very windy, but less than in the night. After breakfast we set sails towards South, logical direction since the wind was from NE, and sailed to island Dvainka near Šibenik. We anchored in bay on NE, that was protected by neighbouring island. Over the day wind got weaker and weaker, and the afternoon was sunny and warm. There were many smaller motor boats anchored there, and also couple of sailboats. We enjoyed the afternoon swimming and snorkelling.

This is this year's newest fashion for sea urchins - trend is urban with new materials like chicken bones... 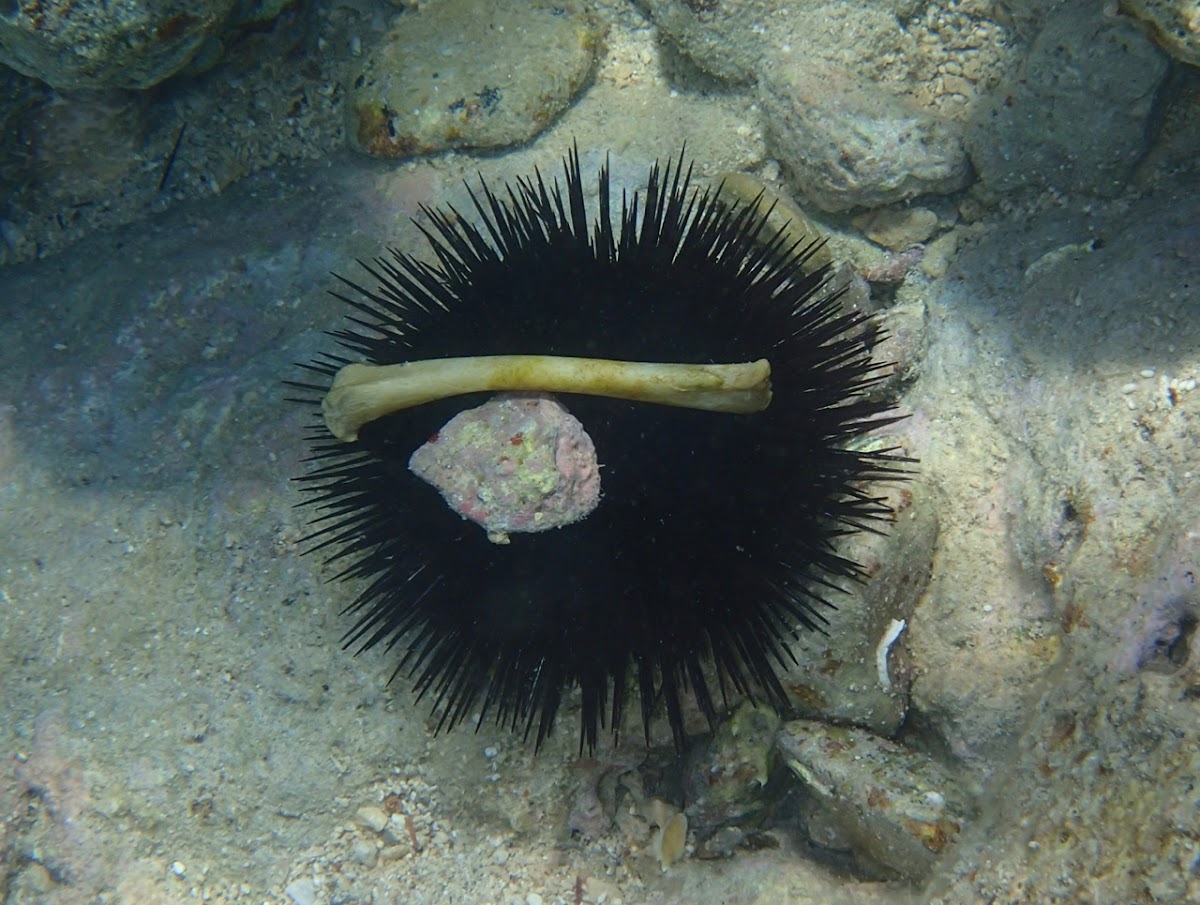 ...or coloured glass. Maybe we'll see trend "back to nature" again next year, and algae and pieces of shells will be fashionable again. 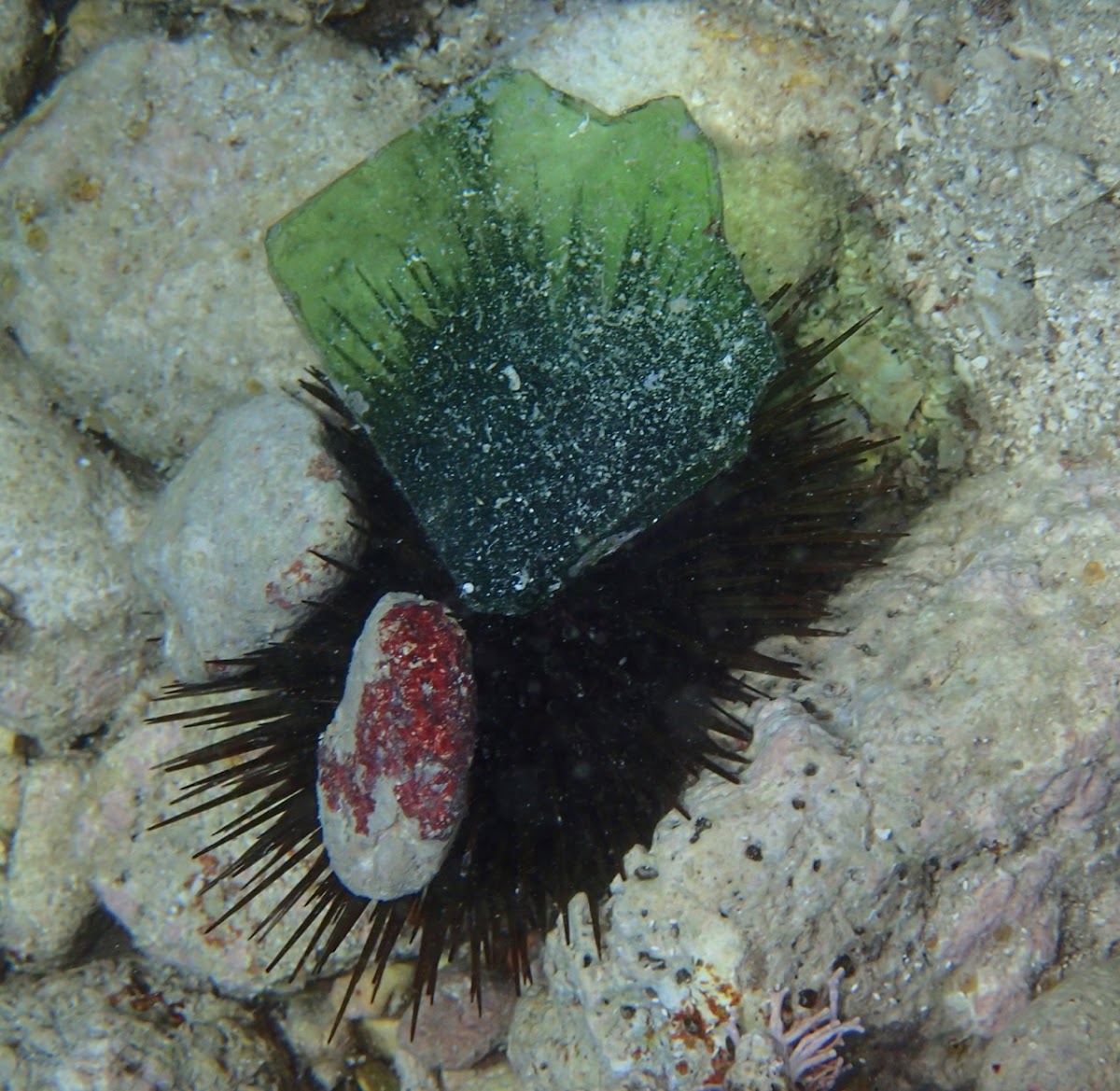 I'm always very happy when I manage to make a good photo of Peščeni cevkar  or Sand tube worm (Myxicola infundibulum), they are so shy and as soon as they notice some movement around them, disappear immediately in the sand. 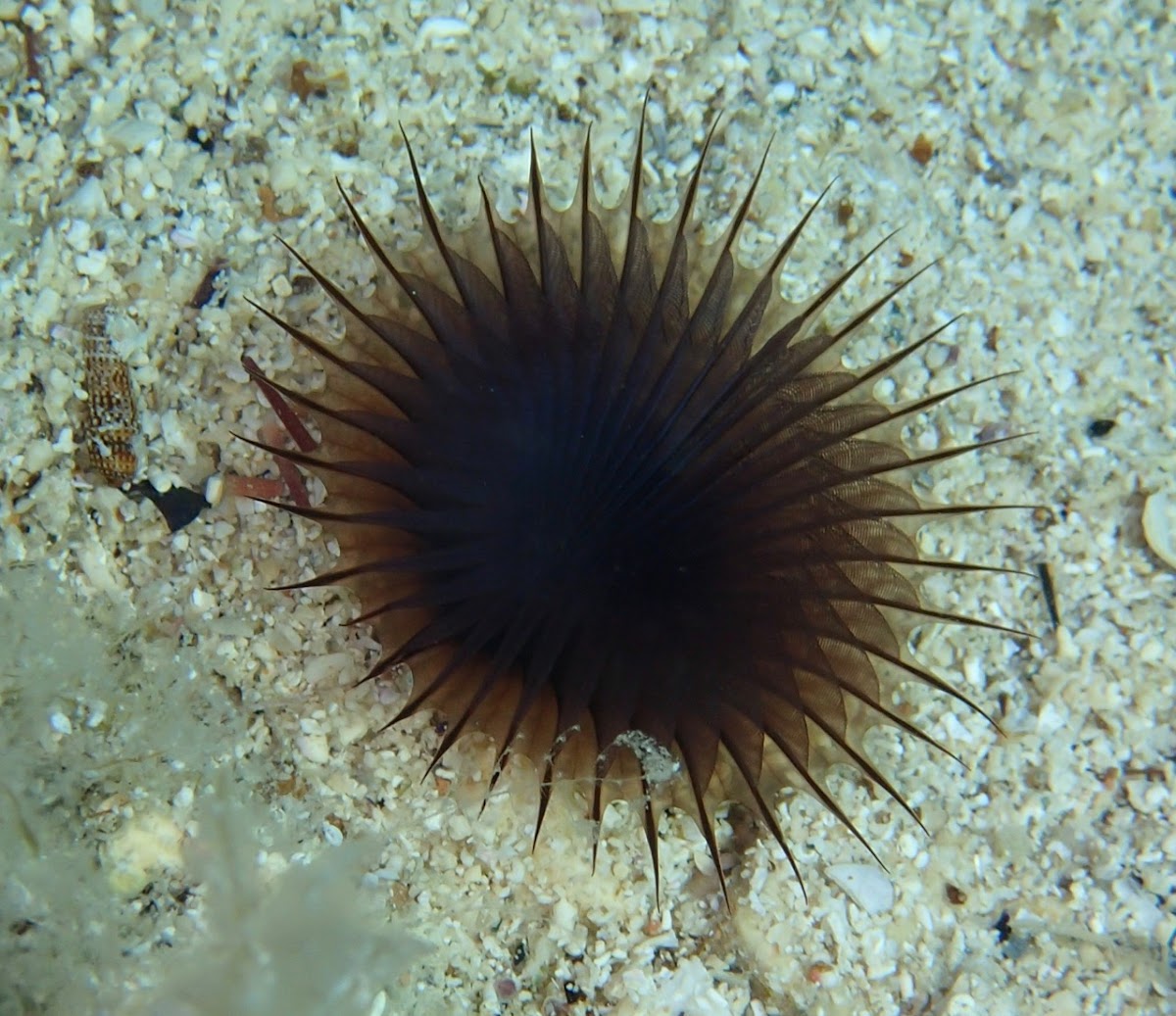 We liked the bay and decided to stay for the night. Next morning we sailed on an made a stop in Vanjiška uvala on islan Kaprije. It was a warm day, wind almost died and the turquoise water was very inviting.

I found this Peščeni glavač or Slender goby (Gobius geniporus) interesting, I've seen many before but  don't remember any of them having such kaleidoscope eyes. 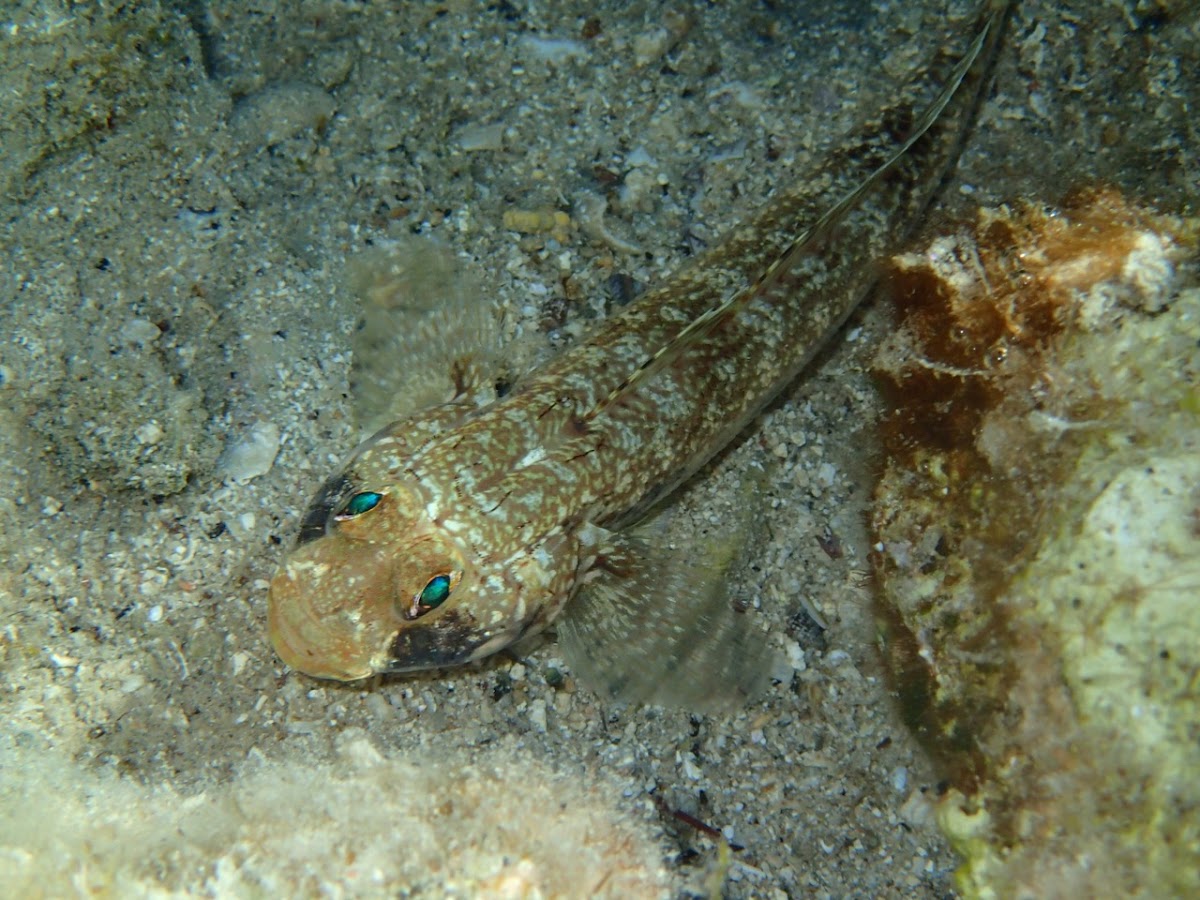 In late afternoon we had a nice sailing to Uvala Stupica Vela on island Žirje. It was already late when we got there and there was only time for a BBQ and couple of glasses of wine before going to bed.

But next morning there was enough time for some of the crew to dinghy ashore and explore the remains of the fortress on the hill, and I went snorkelling, of course. Water was very clean and there was lots of life in it. I found a Progasta porcelanka or Brown cowry (Luria lurida). 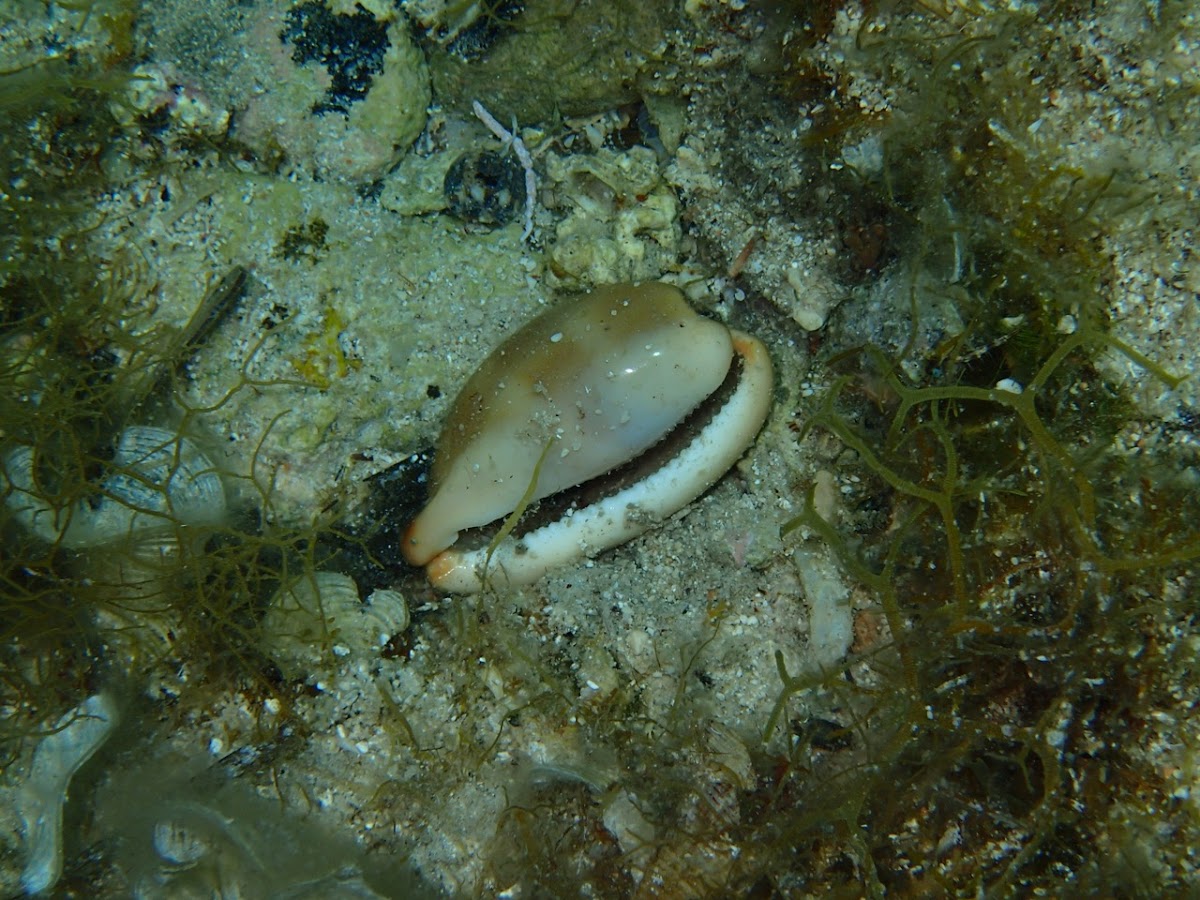 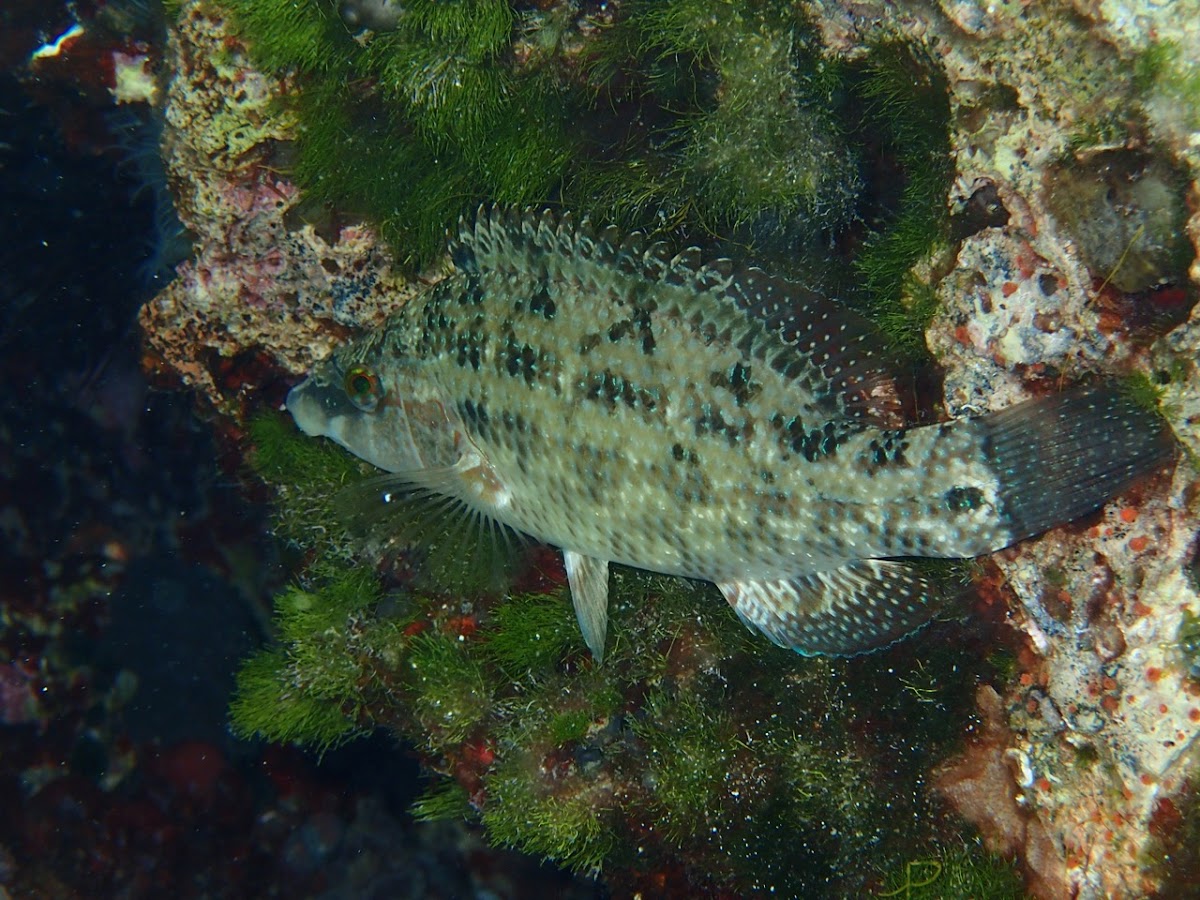 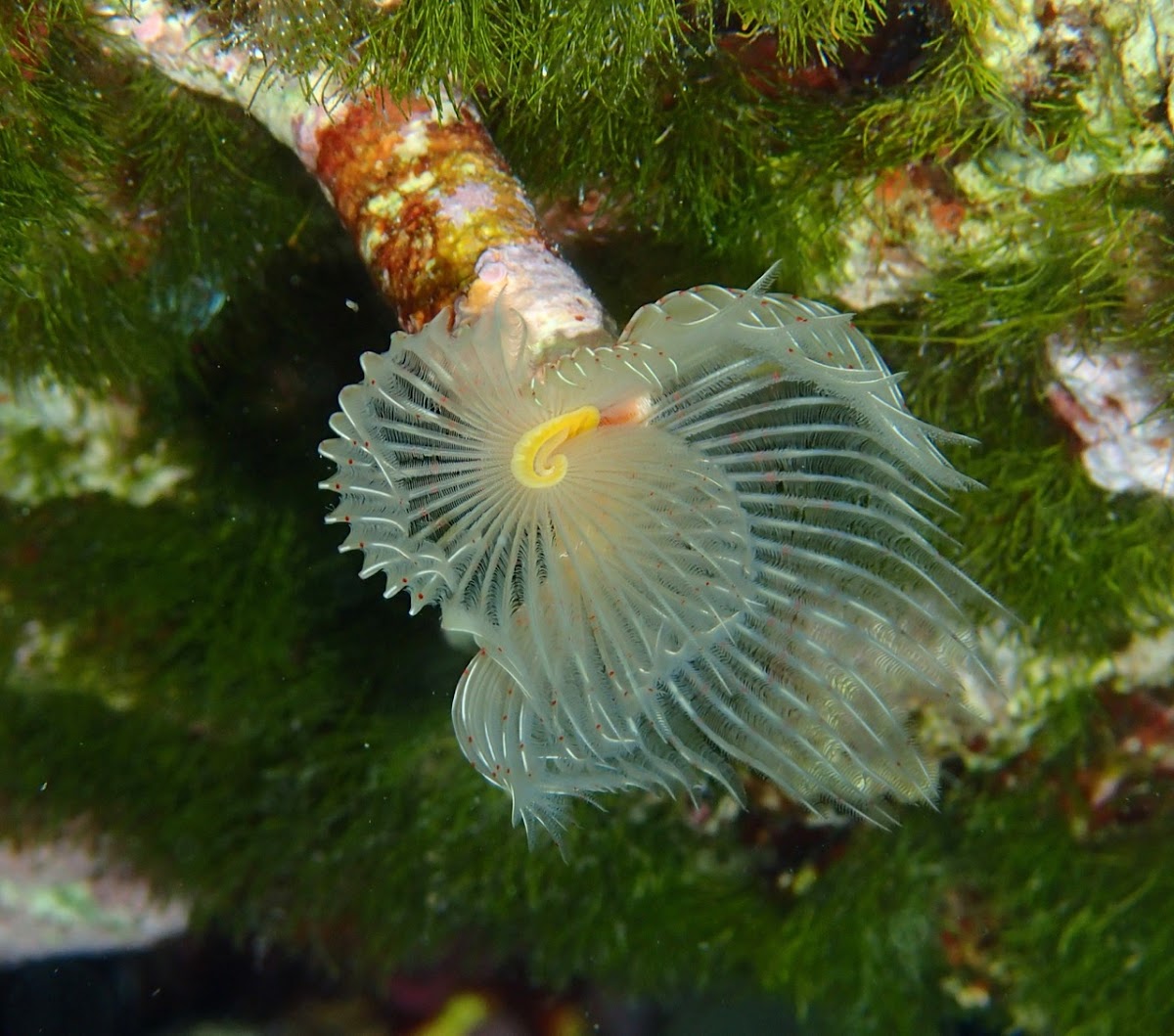 One of the prettiest shells - Petrovo uho or Ear shell (Haliotis lamellosa). 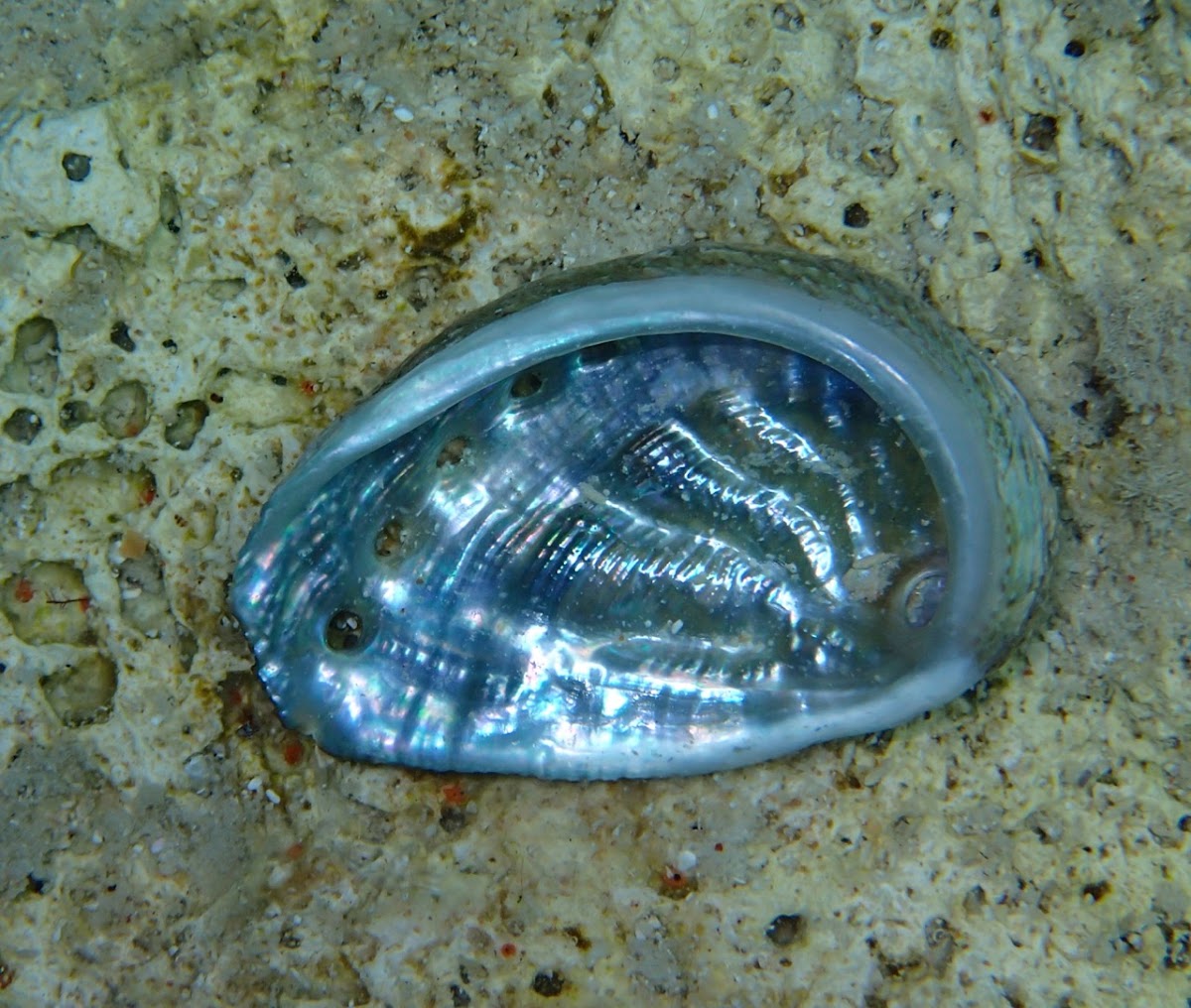 In the afternoon we sailed back to island Zmajan, where we made a stop for swimming. We were all surprised to see a small Morska cvetača or Fried egg jellyfish (Cotylorhiza tuberculata) near our boat, it was the first we've seen this year. 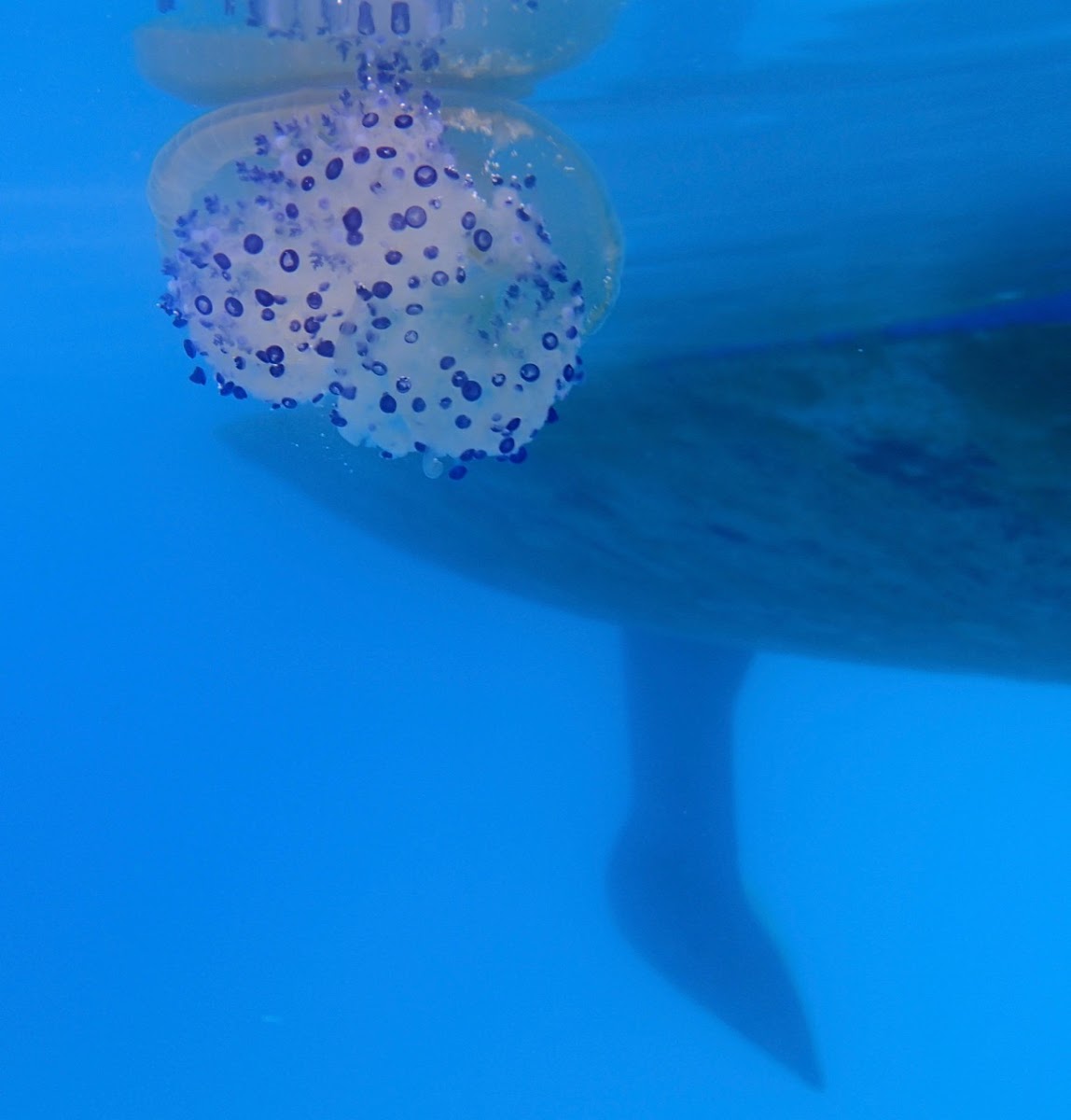 In the evening we sailed to town of Tribunj and anchored in front of the small island near the town. We dinghied to town and had dinner in Konoba Bepo, it was just as delicious as the first time we were there. Next morning we had some time to relaxing and swimming and in the middle of the day our niece and nephew and myself drove back to Ljubljana, our holiday was over.
Posted by Heron at 9:38:00 PM 1 comment: