Today was a very frustrating day. But let me start at the beginning ...
We slept in Golfo delle Saline. Night was peaceful - at least after the Italian animators stopped forcing the guests of the hotel on the nearest beach to participate in caraoke (hotel was ugly, so no photo). In the morning i wanted to have a swim, but realized that water got much colder than it was last days - instead of cosy 27 deg C temperature fell to 24 deg C. On top of this quite strong wind that was still blowing from the west, so i decided to pass. Shower seemed much more inviting.
Bay itself is very pretty, lots of space for anchoring and nice green water. 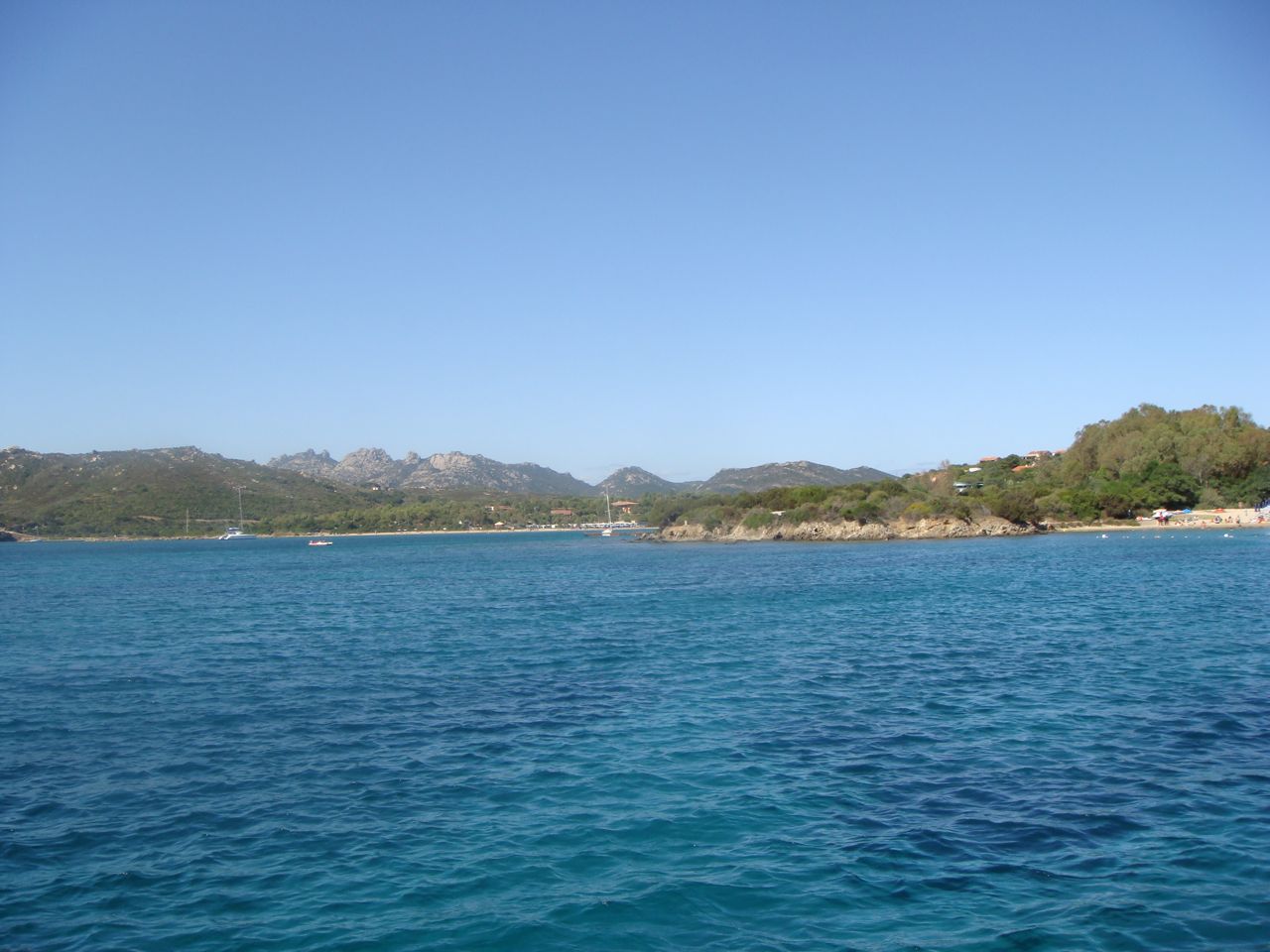 We read that there is suppose to be the rock on one of the hills that looks like a bear. The only hill with interesting rocks was this one. 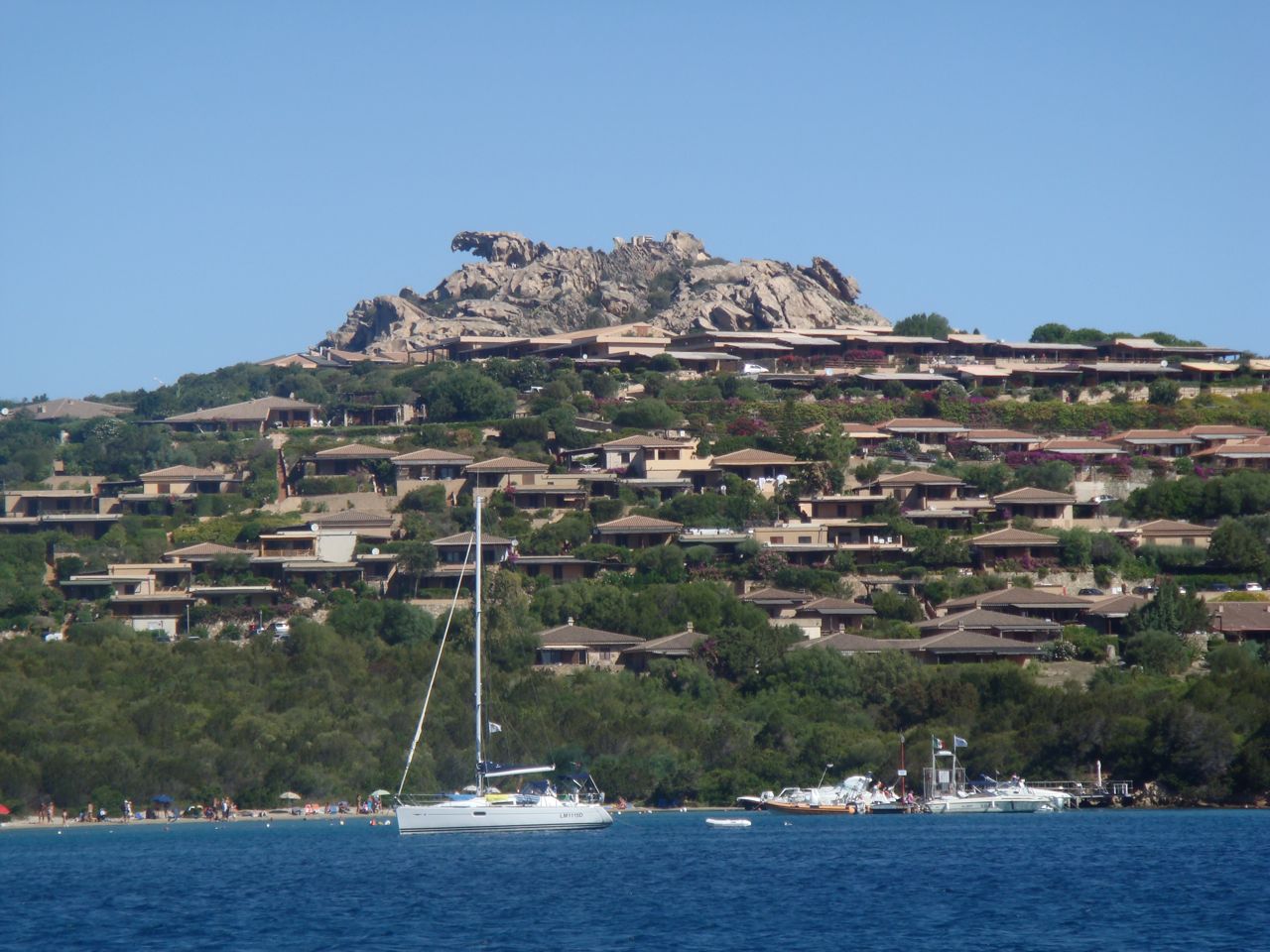 But bear? Dinosaur maybe ... with lots of imagination. Maybe the bear is on another hill?
We sailed off again relatively late, around 11. When we came around the corner, wind hit us with full strength. Of course - on the nose again. So we were motoring. Our main was reefed, we were hoping it will help our speed a bit and stabilize the boat. But it was very hard trying to keep some wind in the sail, since we were maneuvering between Sardinia and Maddalena islands while trying to avoid ferries, motorboats and other sailboats.
The fort on Maddalena island ... 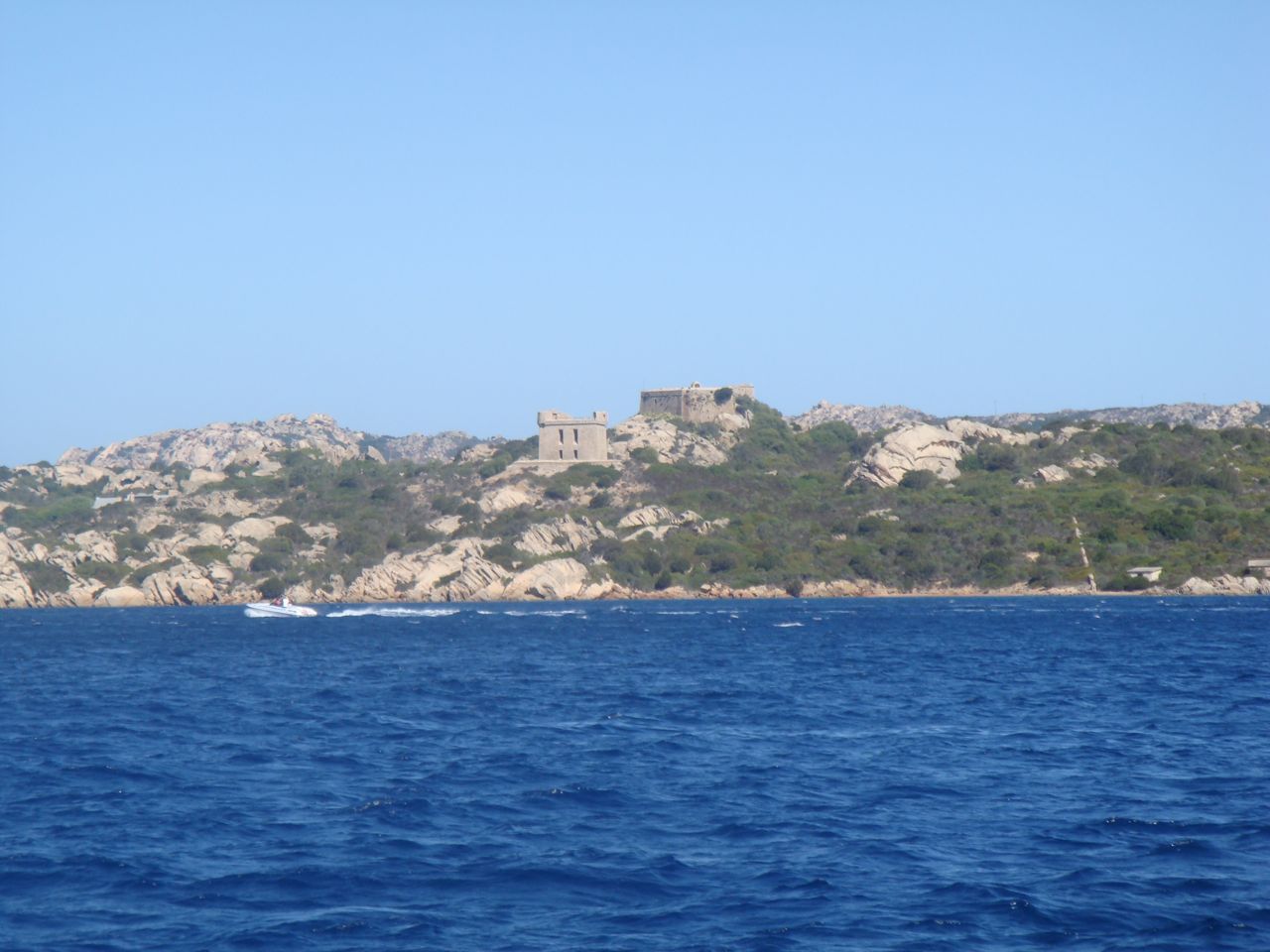 ... and the biggest town on the same island, also named La Maddalena. The whole group of islands is a national park and Italians charge entrance fee for this archipelago, as for so many other islands around Sardinia. So we stayed away. Not just because of the fee - we tried to understand the different zones in parc and different rules, but it is just to complicated and of course it was in Italian. We decided not to bother. 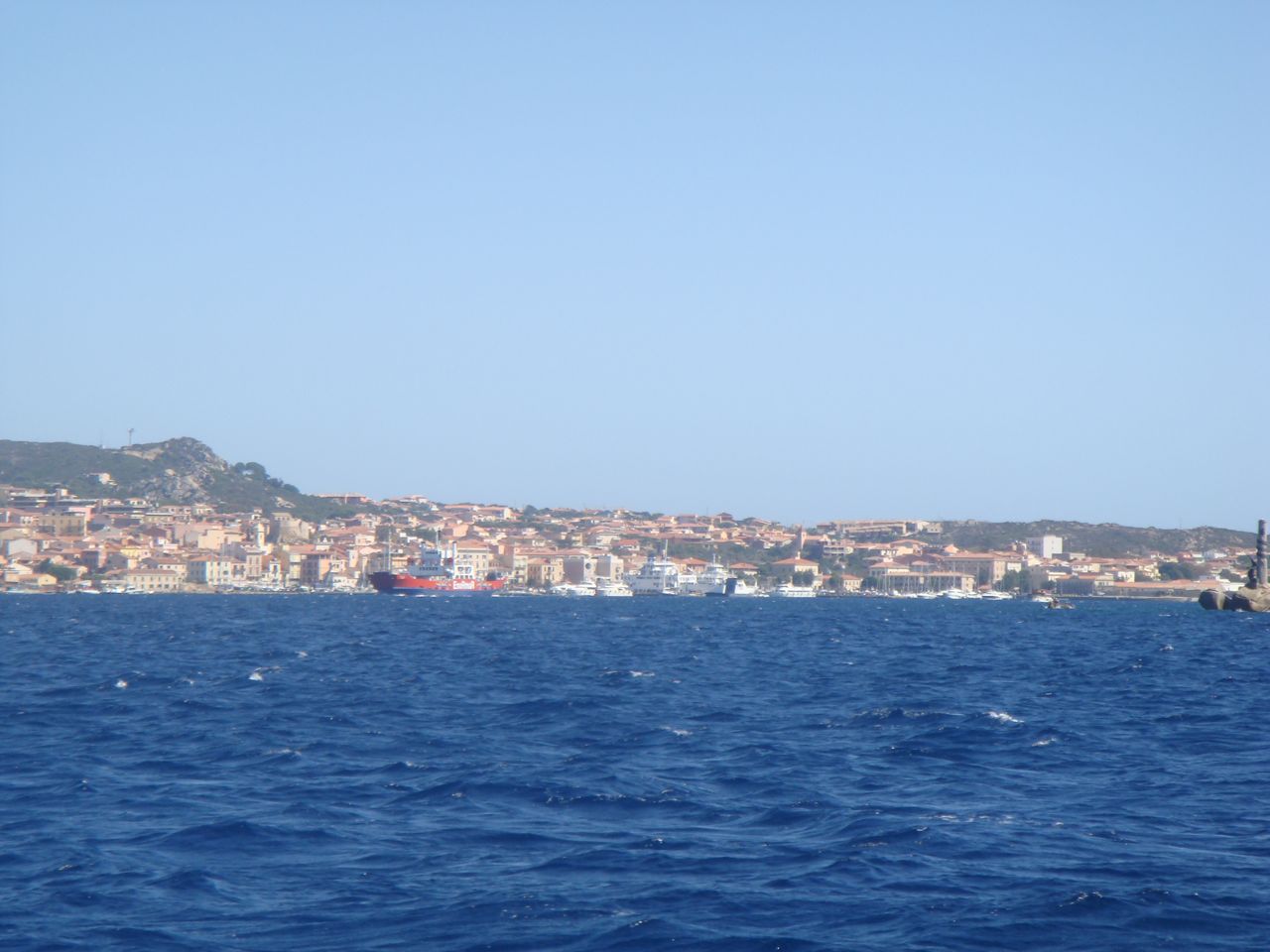 While we were on our way i turned the head and there in the distance he was - the bear. 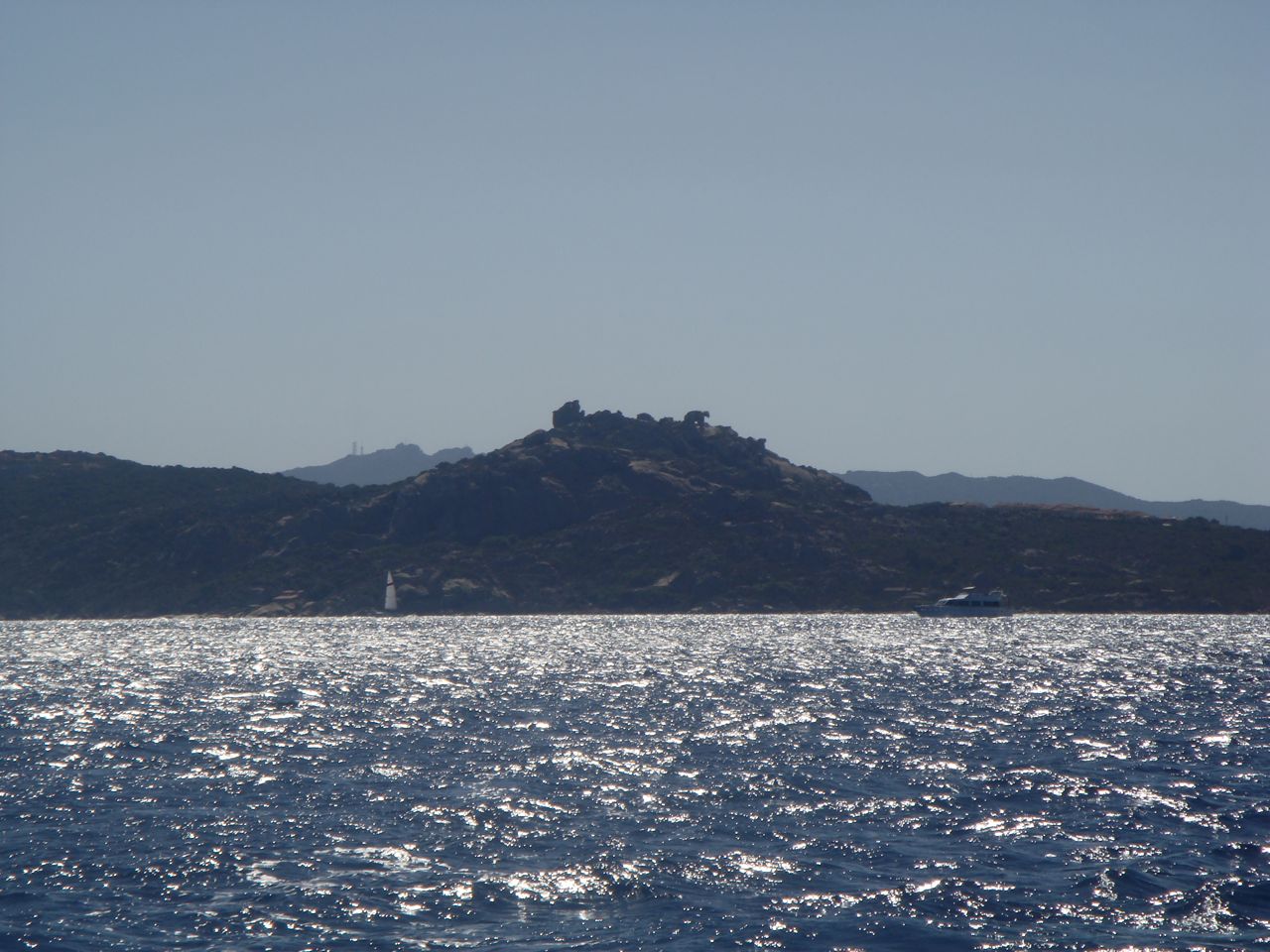 Despite of all the work with sailing we still noticed the beauty of the place - it still looks wild and unspoiled despite many houses built in the area. And when i'm filthy rich and to old for sailing, i'll buy me one ..... 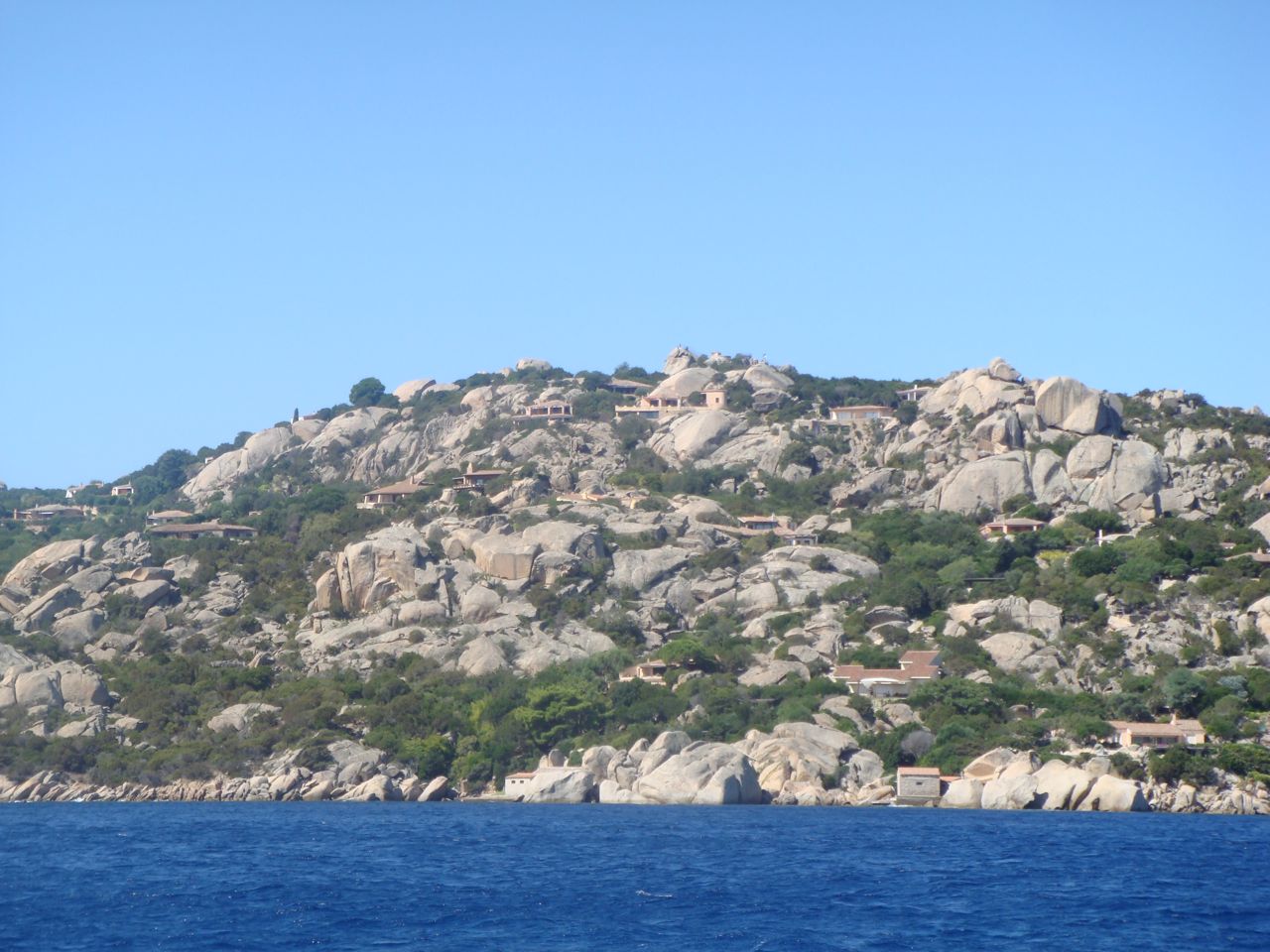 Once we passed Maddalena islands Corsica came into sight in the distance, with it's islands with unbelievably white cliffs. 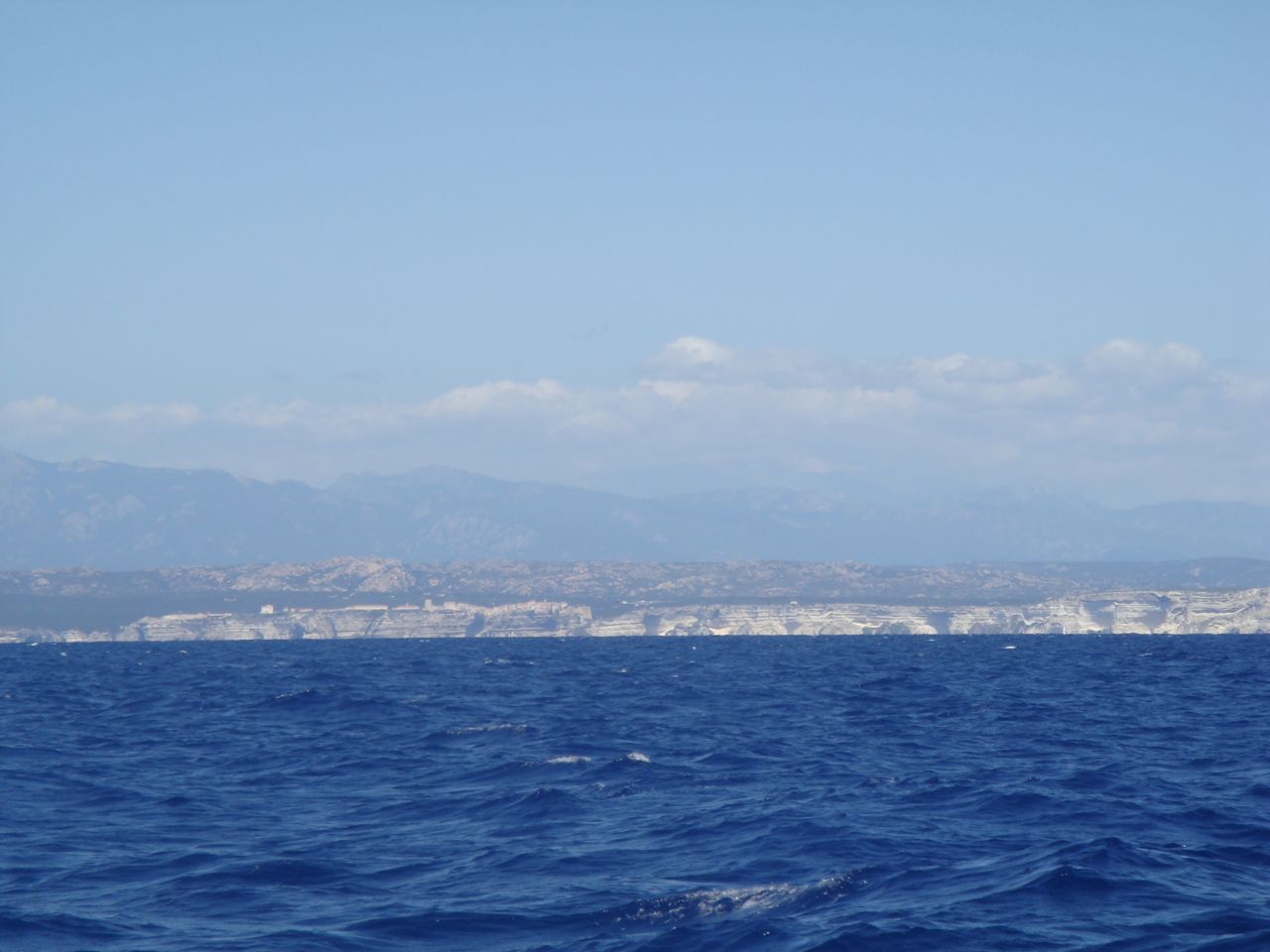 On the northern side the waves were even bigger, but we killed the engine and rolled out the genoa and were sailing. There was no way Tomaz would motor with so much wind. But the wind stayed in our nose, so we were tacking against the wind (for non-sailors: tacking means sailing against the wind as high as possible in zig-zag pattern. This way one has to make twice as much distance as if wind was from the side or on the back). And i was so envious of all the boats going in the opposite direction as us - they had good speed, they were not cold, they did not bump in the waves .....
I still managed to make o photo or two ... this one is of the Punta Abbatoggia 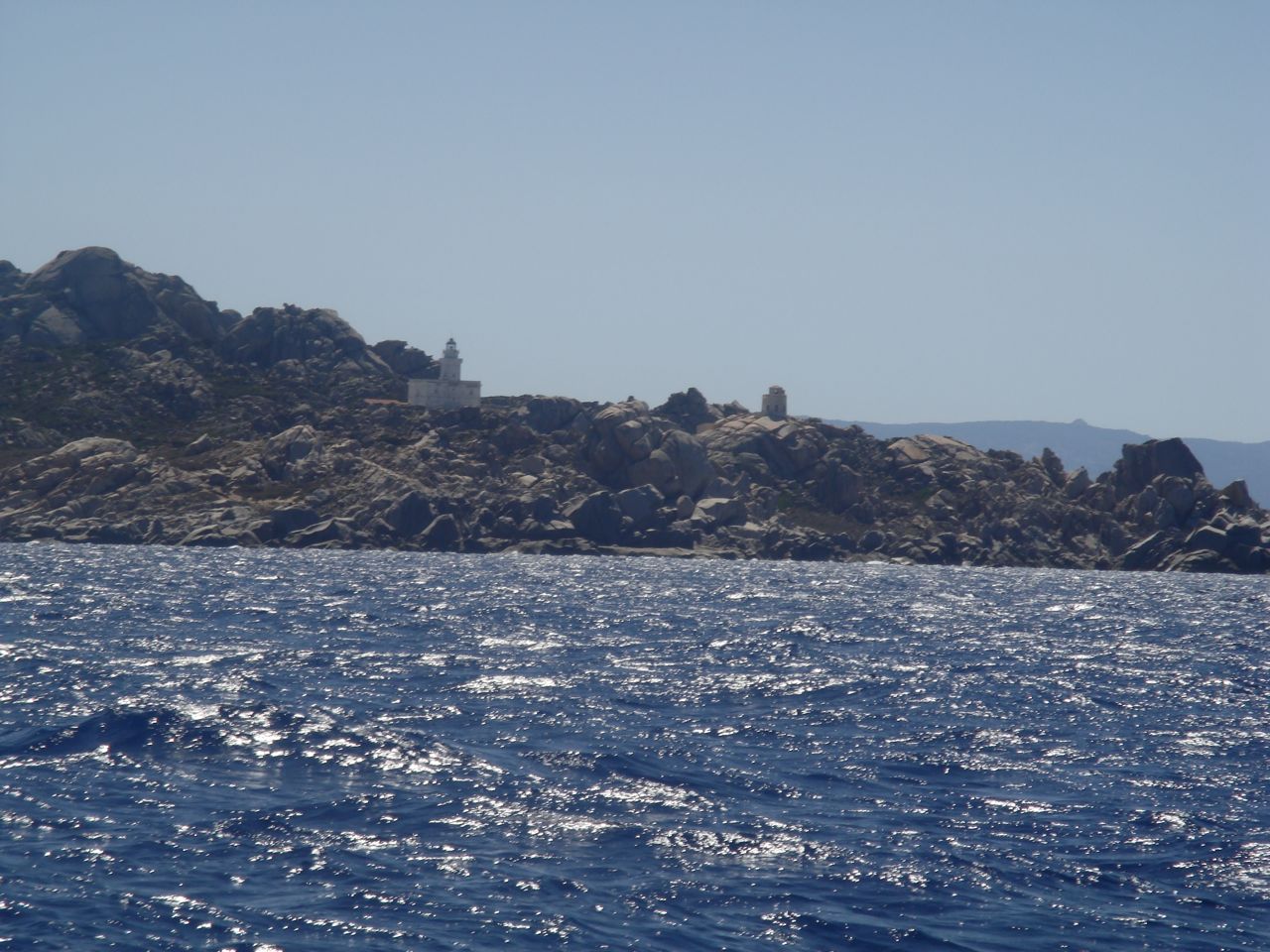 After a while the wind did slow down a bit a waves got a bit smaller, so i decided it was time to cook lunch. Of course it was going to be something simple - spaghetti with aubergines-tuna-tomato sauce. The stove is on the hinges, so the pots were always leveled horizontally, the problem was with other utensils. I had to be careful where i put things, they had the tendency to slide or fly around the boat. And of course i had to use one hand to hold myself to stay in one place. But all went fairly well until i was putting the meal on the plates - while i was filling the second plate and the first one was sitting full at the counter on my left, a wind gust came and rocked the boat and suddenly spaghetti jumped from the plate and landed on the counter. Together with the sauce of course. It was big mess. I was mad, started yelling at Tomaz, who didn't do anything wrong. After couple of moments i calmed down, put the food back on the plate and we ate. And i decided to buy bowls with higher rim that we will use instead of the plates. 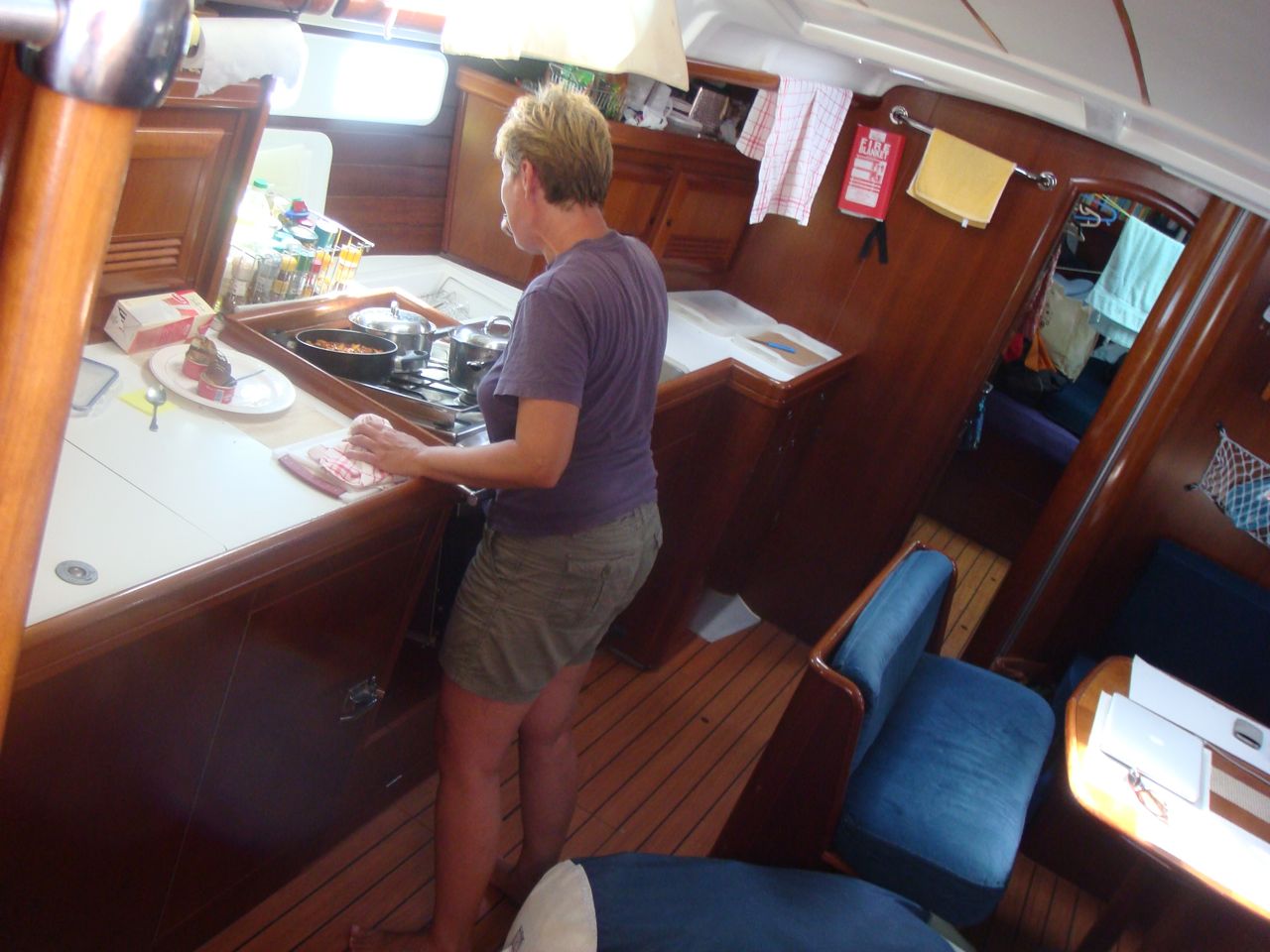 Since we were zig-zaging towards our destination, we didn't make the distance we planed. Instead we changed the plan - as our Swedish friend Jonas said: plans are made to be changed. We decided to stop for the night at Isola Rossa, sail to Capo Falcone tomorrow and start our crossing to Menorca on wednesday morning. We checked the weather forecast and the weather will still hold, we might even have better wind.
Isola Rosse got it's name from red cliffs and there are many in the area. We anchored the boat and both went swimming, the water had cosy 27 deg C. And afterwards i cleaned the kitchen. 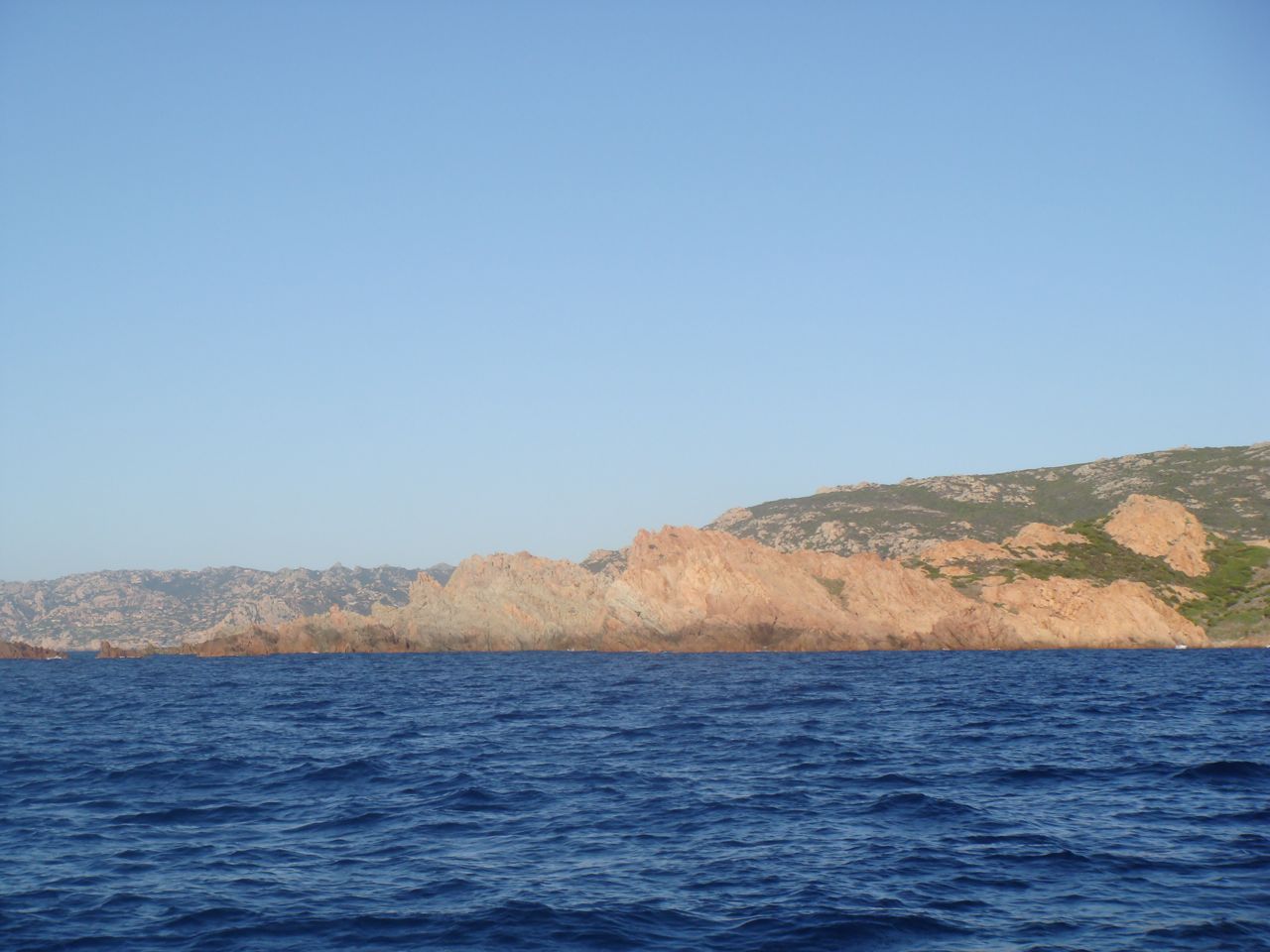