From Lastovo we sailed to Korčula, it was a fast and bumpy sailing with more SE wind than forecast. We made a stop in small bay Uvala Poplat in late afternoon. We were anchored quite near the rocky coast and some other boats, so it was definitely not a place for the night. So after a short deliberation we decided to do a night sailing to Vis. The forecast was almost no wind and a clear night, so we were anticipating a couple of hours of motoring under the moon and stars with a drink in our hands. We sailed off right after the dinner and waited for the wind to die. But it didn't, it even got stronger. So we had fast and again bumpy sailing with no moon and stars and definitely no drinks. Near island of Vis wind even turned to N and sailing got more uncomfortable. Shortly after midnight we were in a bay in front of town Vis. Since last time we were there they placed the buoys almost across all the bay so it took us another hour to find a spot for anchoring. Water was deep, almost 15m, and captain was not very happy with how we were anchored. But space was limited and we were too tired to search for another spot. Finally we got to bed.

But we didn't sleep for long. At about 5 in the morning it started to rain and the wind picked up. Captain and myself got up, he checked our anchor and the situation outside and I checked the hatches. Everything was fine, except for the big catamaran that was dragging the anchor and was coming directly at us. Captain got quite nervous at the prospect of Heron being straddled by such a big cat, our anchor surely wouldn't hold both ships and behind us were some more boats and the coast. We stayed outside and watched what was going to happen. As the cat was coming closer we saw that the whole crew was on deck, each holding a bumper, and that with a bit of luck they are going to miss us. What we couldn't understand was why they had the engines on, but were just standing around and watching. In couple of minutes they were at our side, crew holding the bumpers between the boats. And that was it. The cat's engines were on, but they were just hanging at our side while the rain was making us all wet. Captain said there was no need for both of us to get wet and he sent me inside, and I thought he will be in in couple of minutes. After half an hour I went out again and the situation was unchanged - cat was at our side, Hungarian crew were holding bumpers between the boats and the cat's engines were on. I got quite angry and Captain and myself started to urge the cat's captain to do something - they would need to lift the anchor and re-anchor the boat. After a lot of persuasion, some with raised vices, they took our advice and moved the boat further away and re-anchor. Happy that we weren't in their "line of fire" any more we finally went to bed.

Next morning crew dinghied to town of Vis for a bit of sightseeing, some shopping and of course some ice cream. Later we moved to Uvala Parja just outside of the bay for a swim and a walk through abandoned military tunnels. In the evening we made a short but fast sail to island of Šolta and anchored in Uvala Tatinja. Šolta is one of my favourite snorkelling places in Adriatic, especially it's West side. There are several bays there, almost fjords, with deep water and steep shores, and there are no hotels or mass tourism, so it's very rich with life.

It was too late already for snorkelling that evening, so it had to wait until after the breakfast the next day.  This is a Sredozemski stožec or Mediterranean cone (Conus mediterraneus), and although ti looks quite harmless it is actually a predator with small poisonous harpoon. 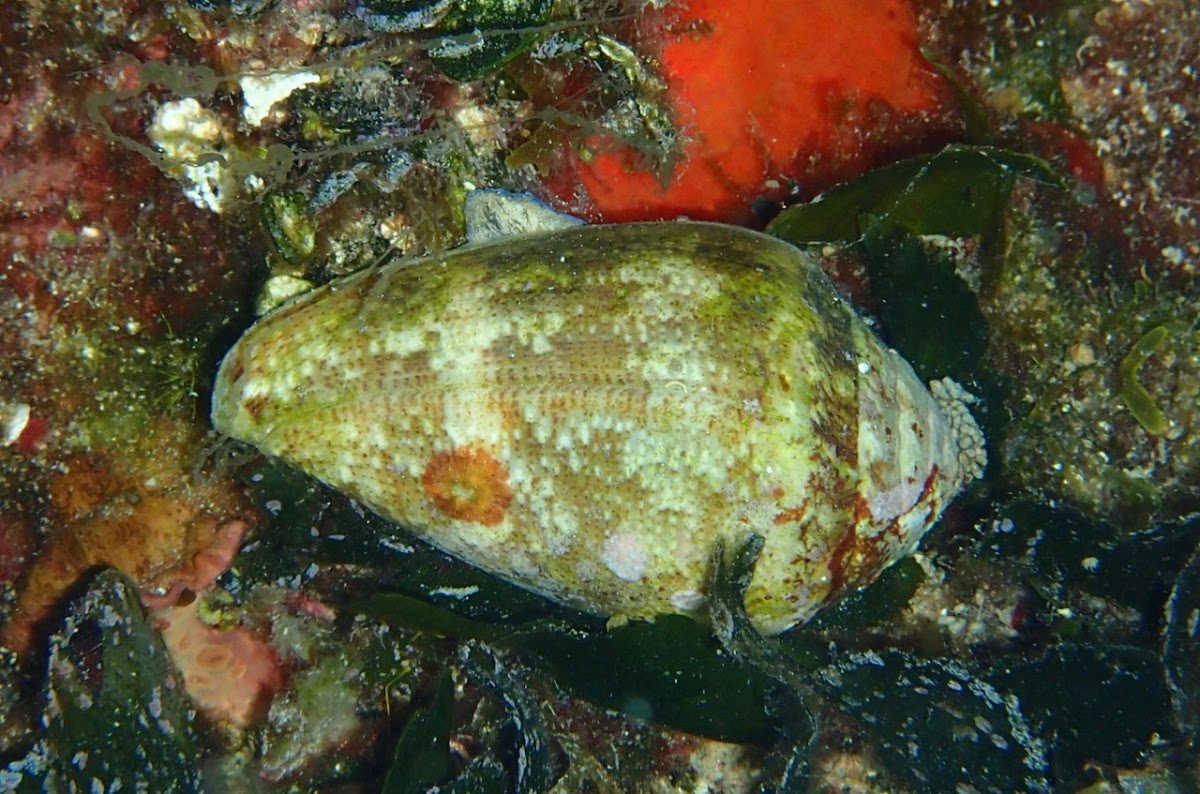 This pretty slug was one of my best discoveries - it is a Kodrasti perjaničar or Giant Doris (Hypselodoris picta). 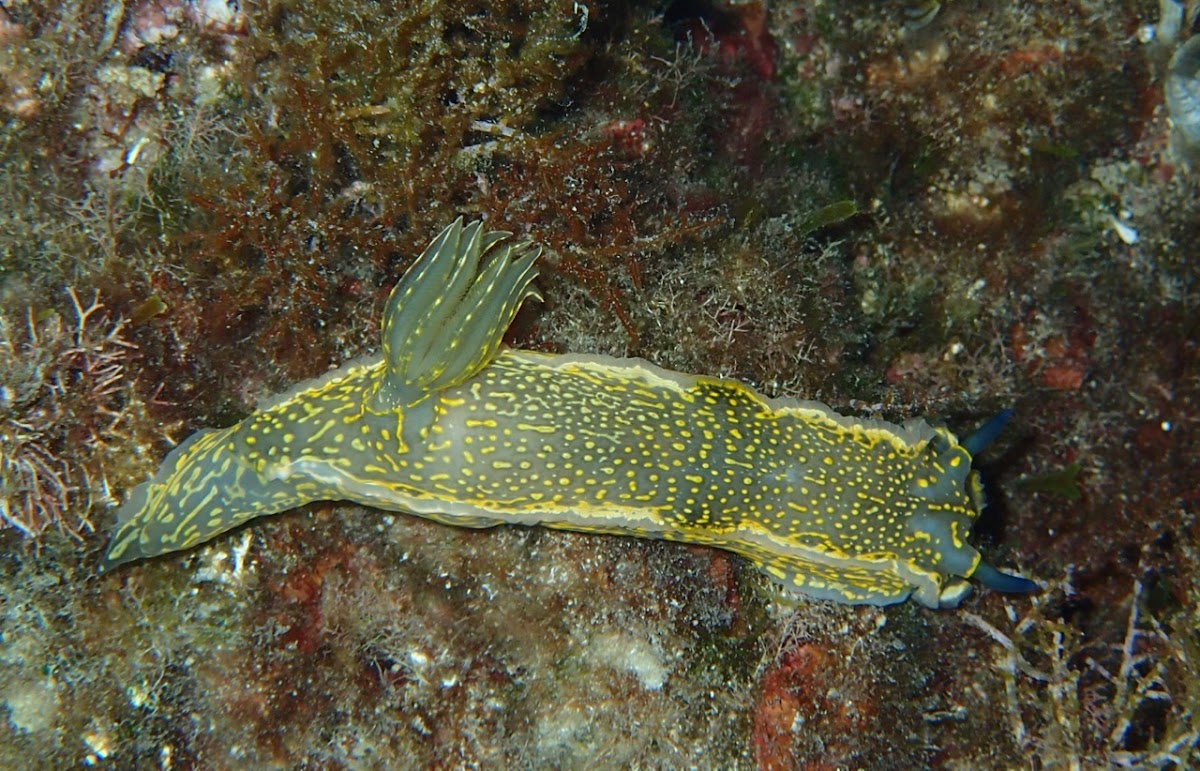 This one might be a bit less spectacular, but it is also my first - it is a Blenny, named Velikooka babica (Lipophrys trigloides). Though at first glance I thought it was a Goby. 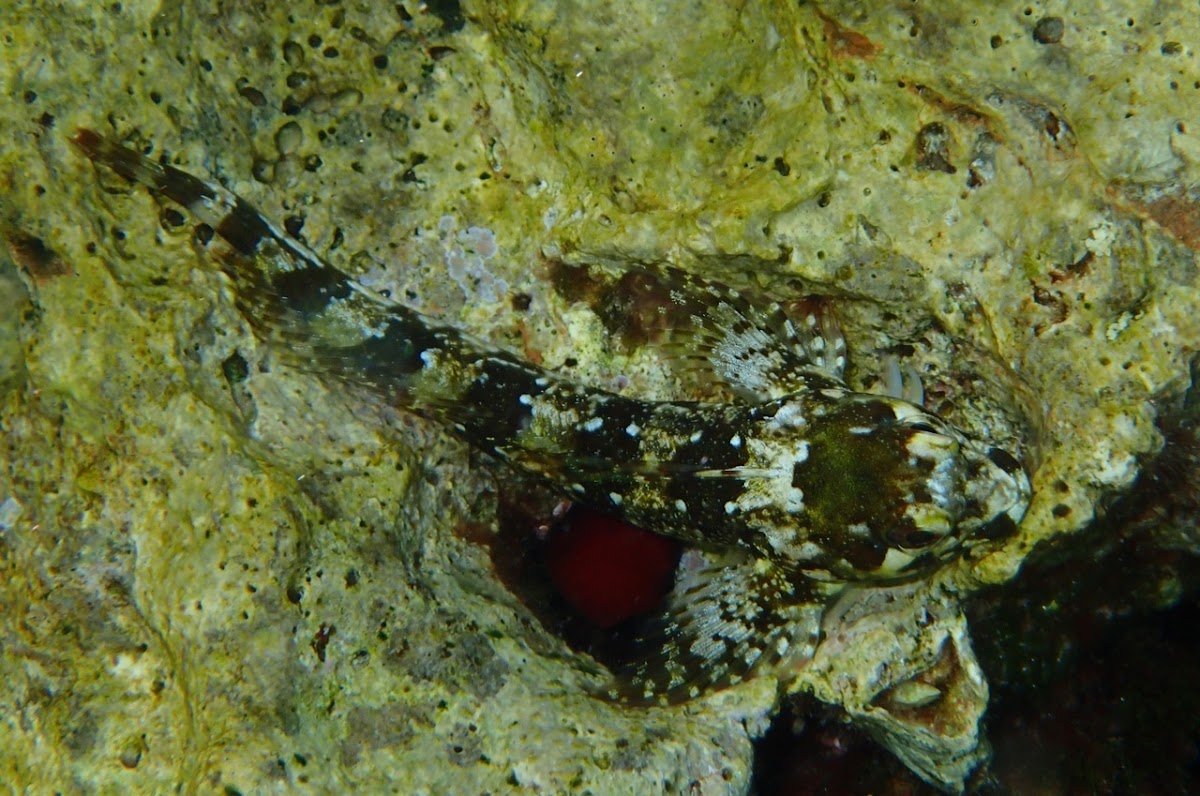 This year was definitely a year of small slug called Pisanček (Thuridilla hopei). I never before saw so many, and as I was going through the photos on my computer at home, I discovered them on many photos where I actually photographed something else and didn't see the slugs at that time. 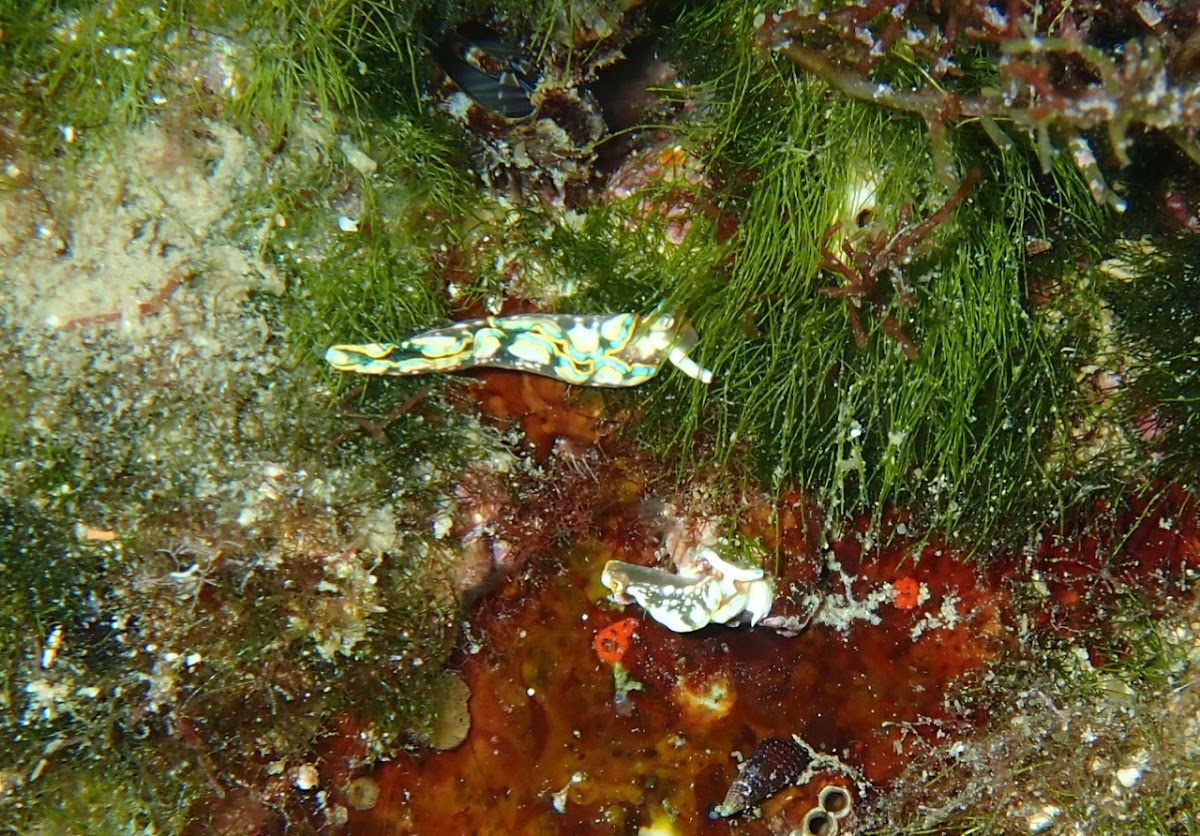 In the afternoon we sailed towards North, it was time to turn back. We made a stop in Luka Grebaštica for dinner. 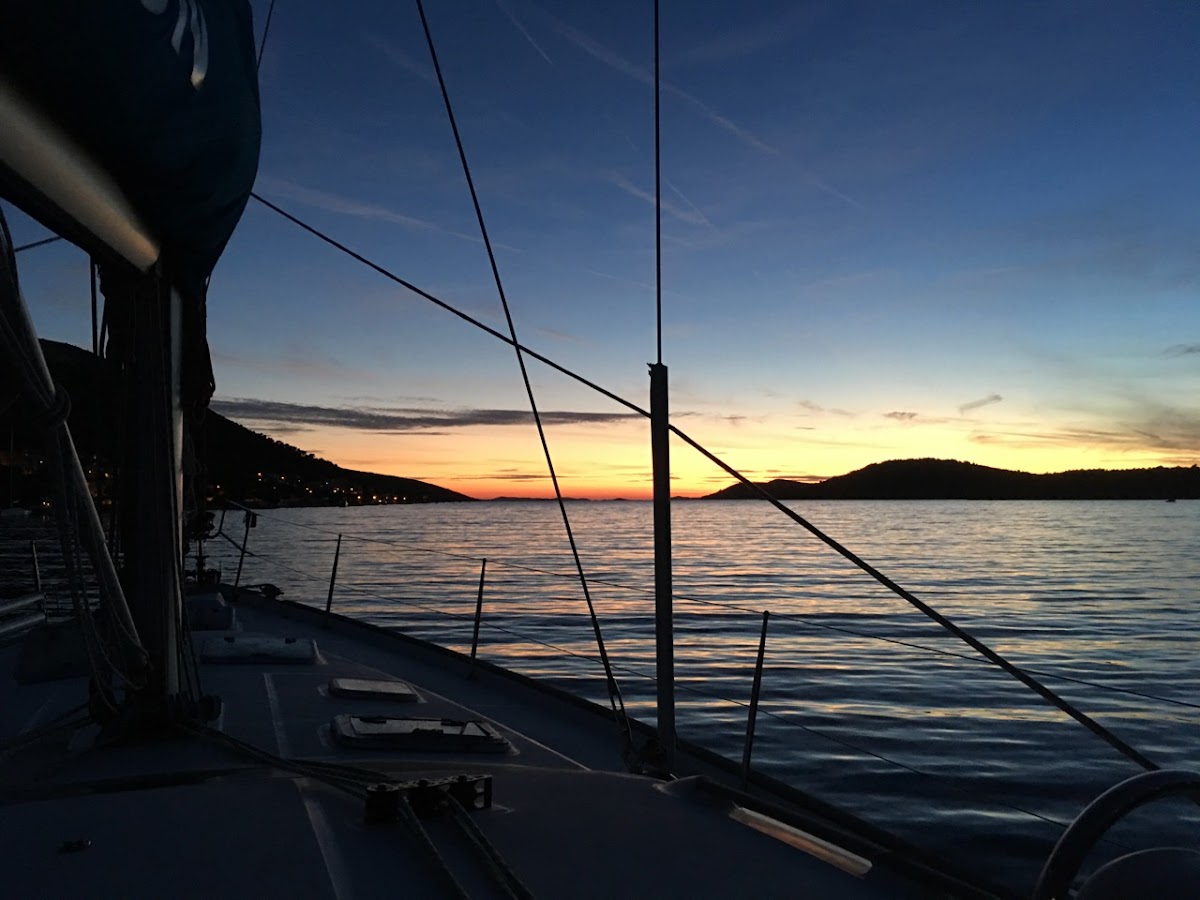 Later, after the sunset, we sailed off again, only a couple of miles further and anchored for the night between island Prvič near Šibenik and mainland.

Next day we sailed back to town of Tribunj. After some swimming at small island nearby and later a great lunch at Konoba Bepo we said goodby to our crew. Captain an I sailed back to island Zmajan, this time there were more boats and people on land and it wasn't as idyllic and quiet as the first time we were there.

Next morning I went snorkelling and I met this shiny fish, which looks like Orada or Seabream (Sparus aurata), just without the dark spot on the gills. 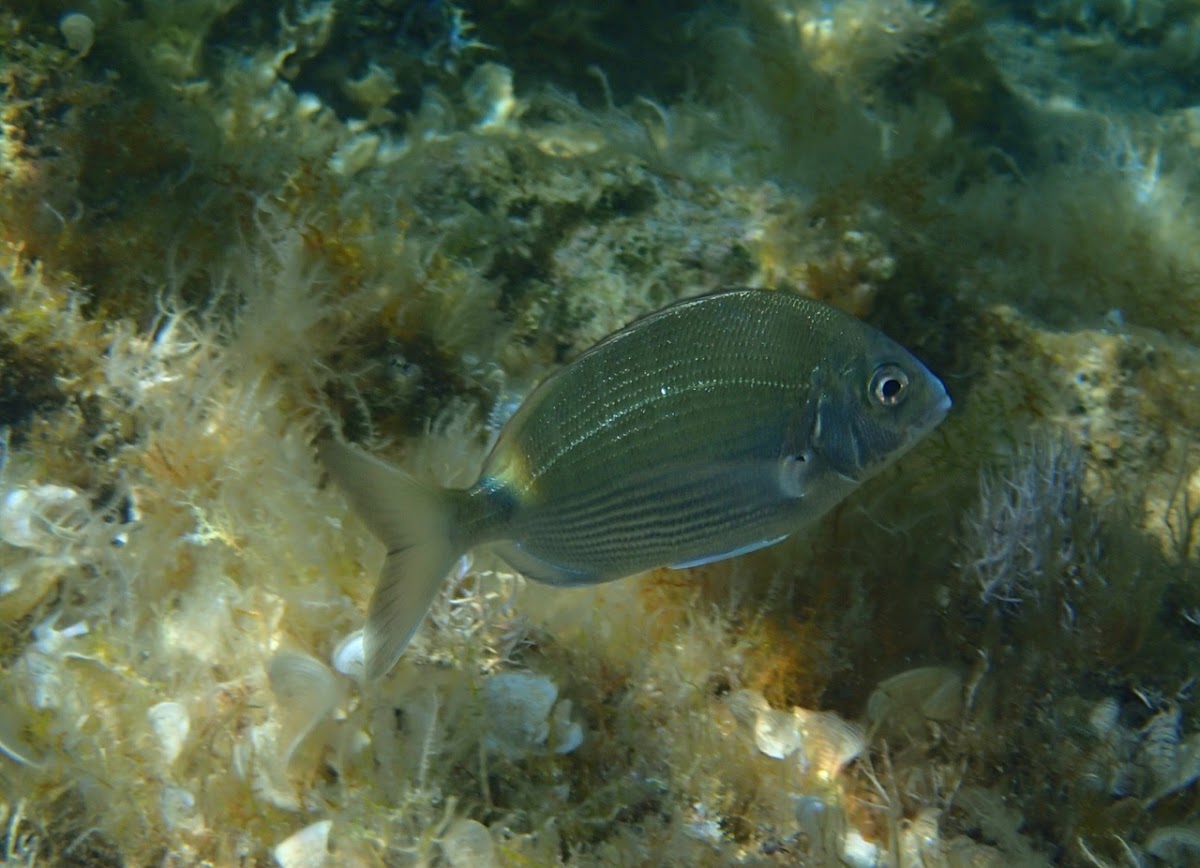 And this was another big discovery - I managed to find a Pikasti perjaničar or Dalmatinček or Dotted seaslug (Discodoris atromaculata). It is one of the prettiest slugs and I thing the name Dalmatian (as the dogs) is very suitable. It is eating the sponge it is on and you can see the damage it has already done. The small crown on his upper part in first photo is his gills. 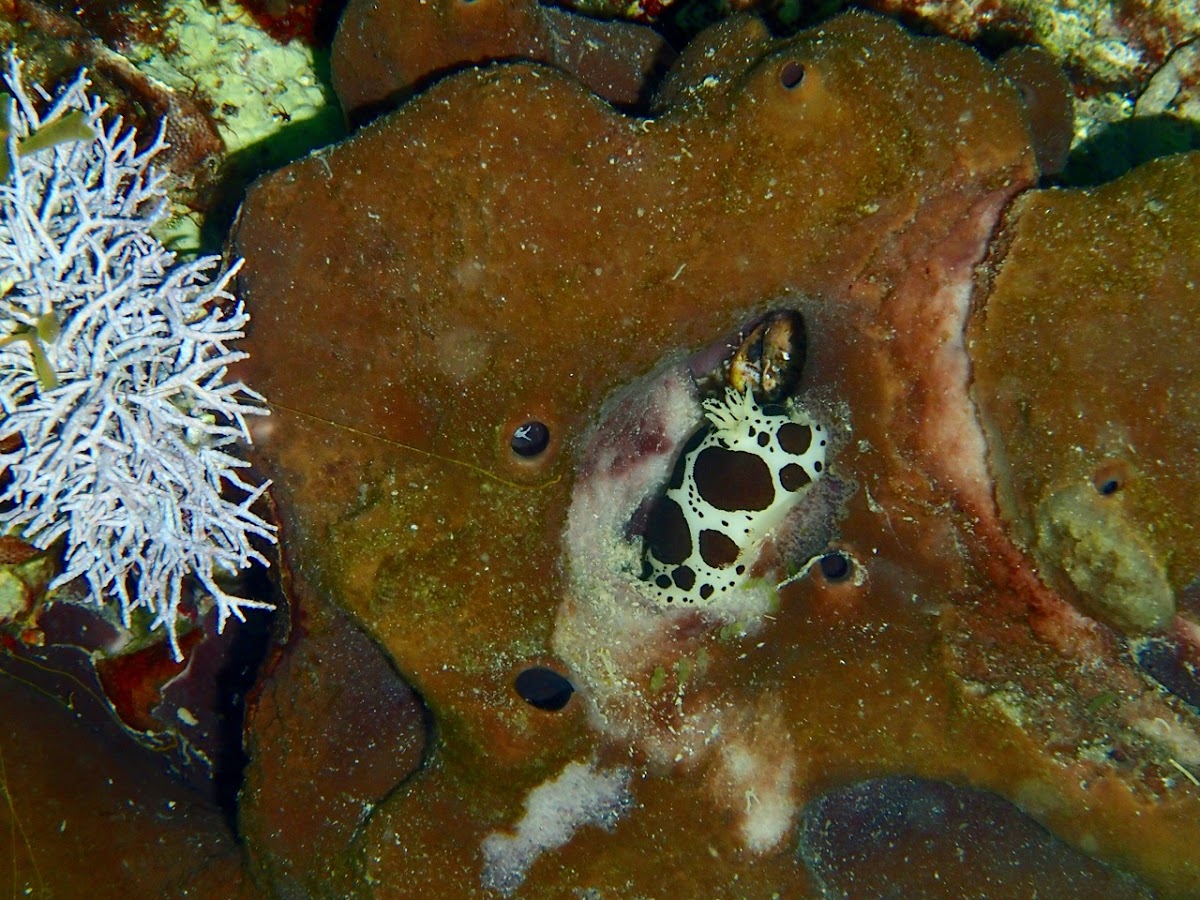 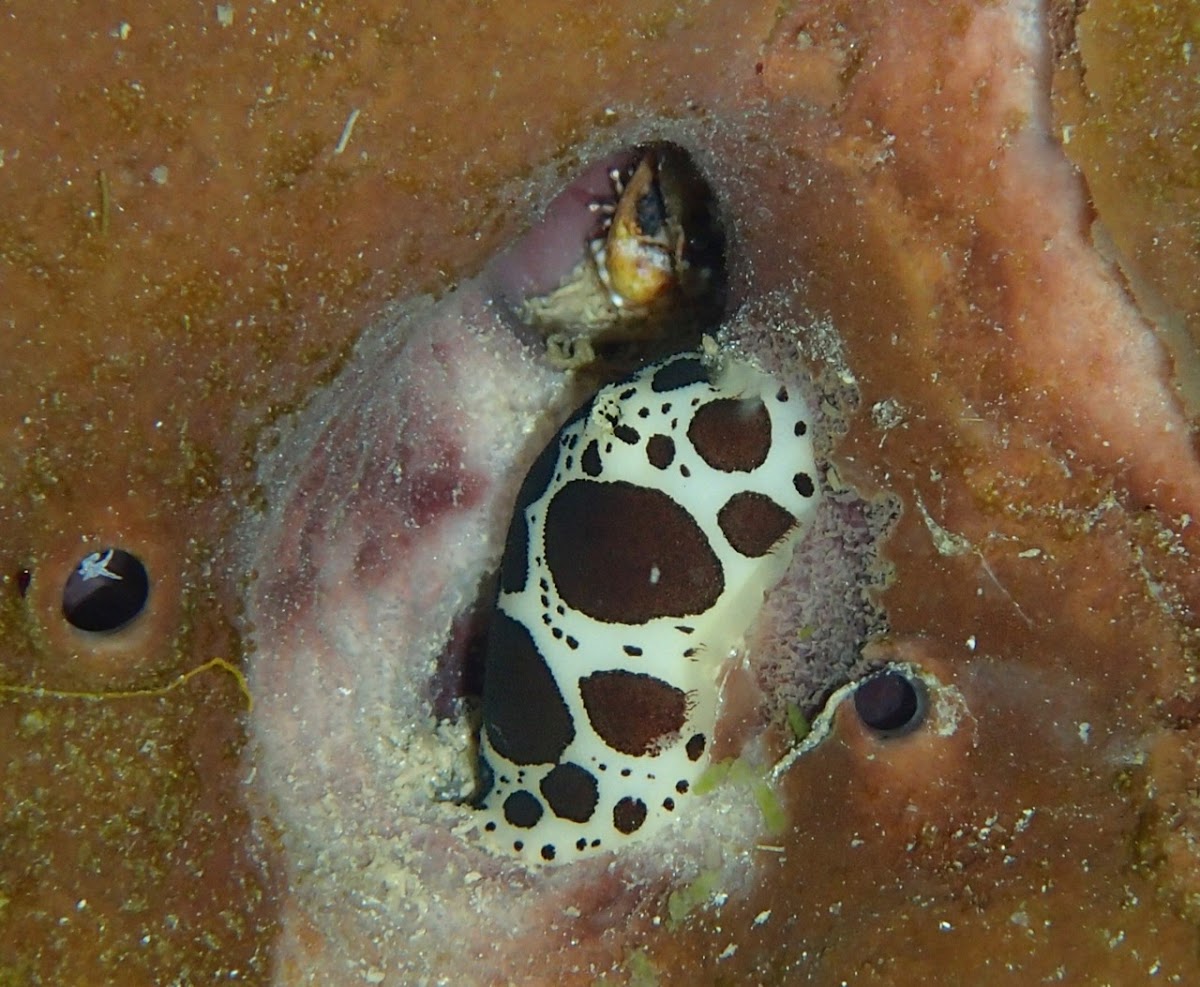 Next morning we sailed further South. We made a stop near Rogoznica, had a breakfast and I went snorkelling. I've seen many of the "usual suspects", I even found a small octopus. One of the most interesting things I saw was green algae named Grmičasti kodij (Codium vermilara). 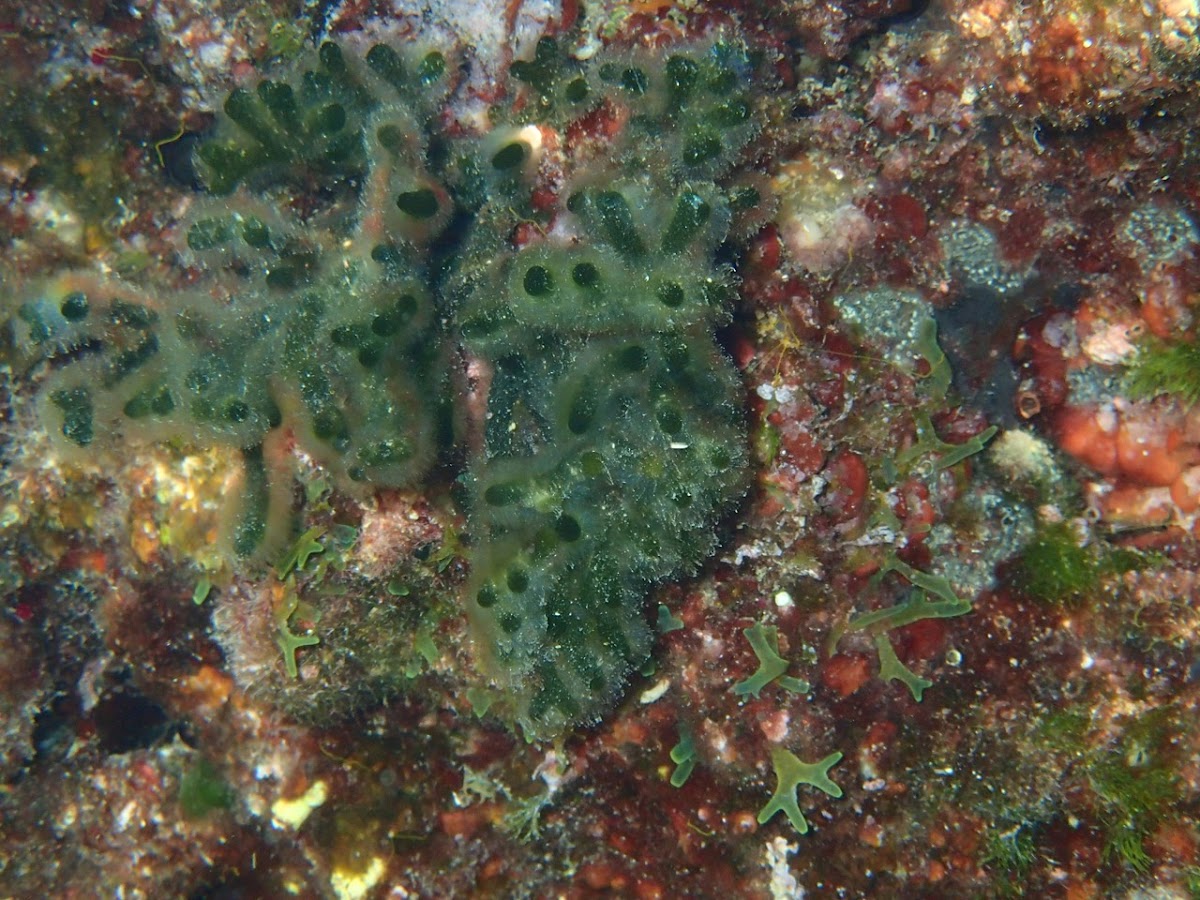 That afternoon we anchored on island Drvenik Veli in bay Uvala Solinska. It was less crowded than Krknjaši, but also less pretty.

Next morning we sailed further on to island Šolta again, this time to bay Uvala Kasjun on East side. The bay is very pretty, rocky with lots of pine trees on the shores. I was surprised that Heron was the only bigger boat there, all others were smaller motor boats that we knew would not stay for the night.

Right after anchoring I put on my mask and fins and jumped into water. I was very pleasantly surprised! I didn't expect as much life here in a channel facing the big city of Split as on the outer side, but it was just as beautiful. 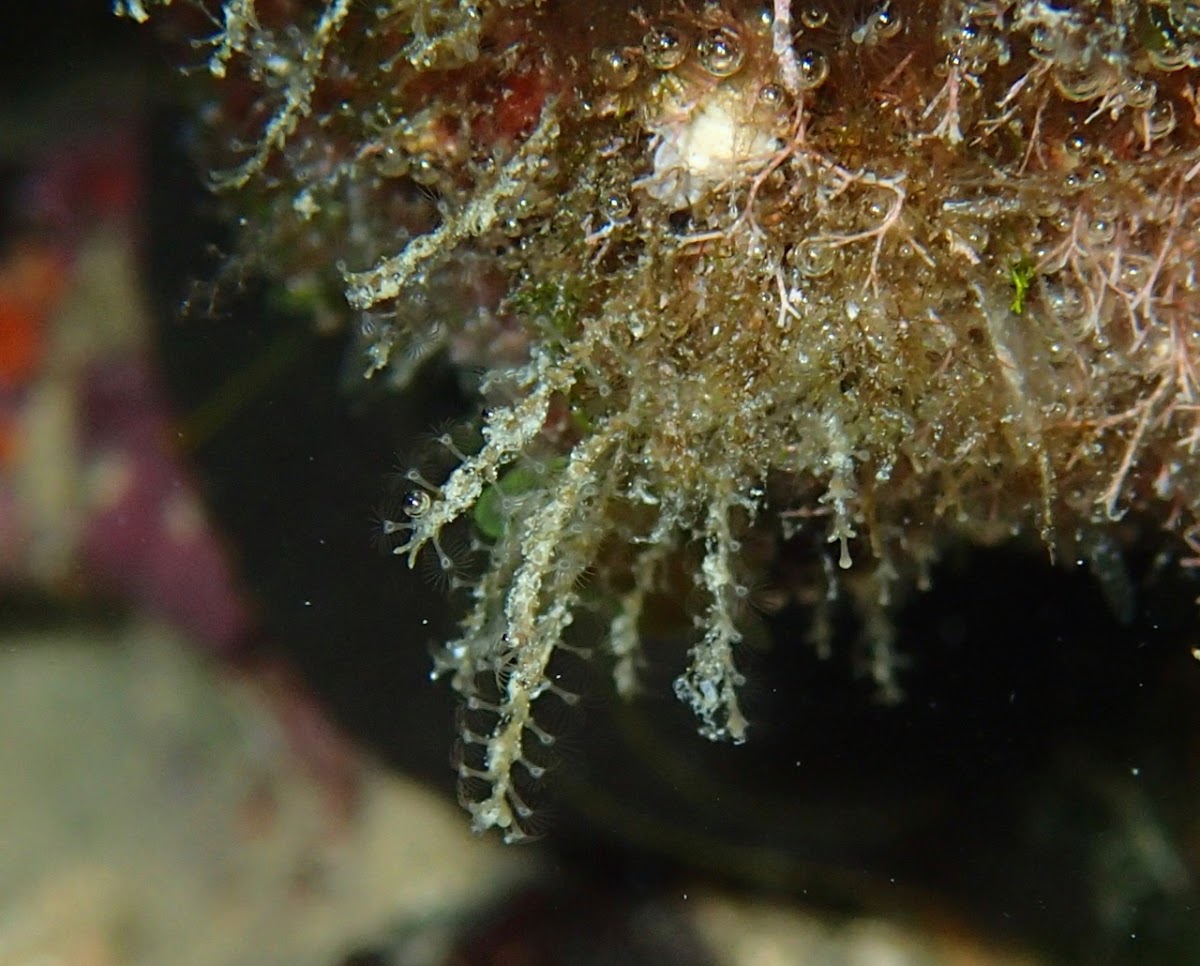 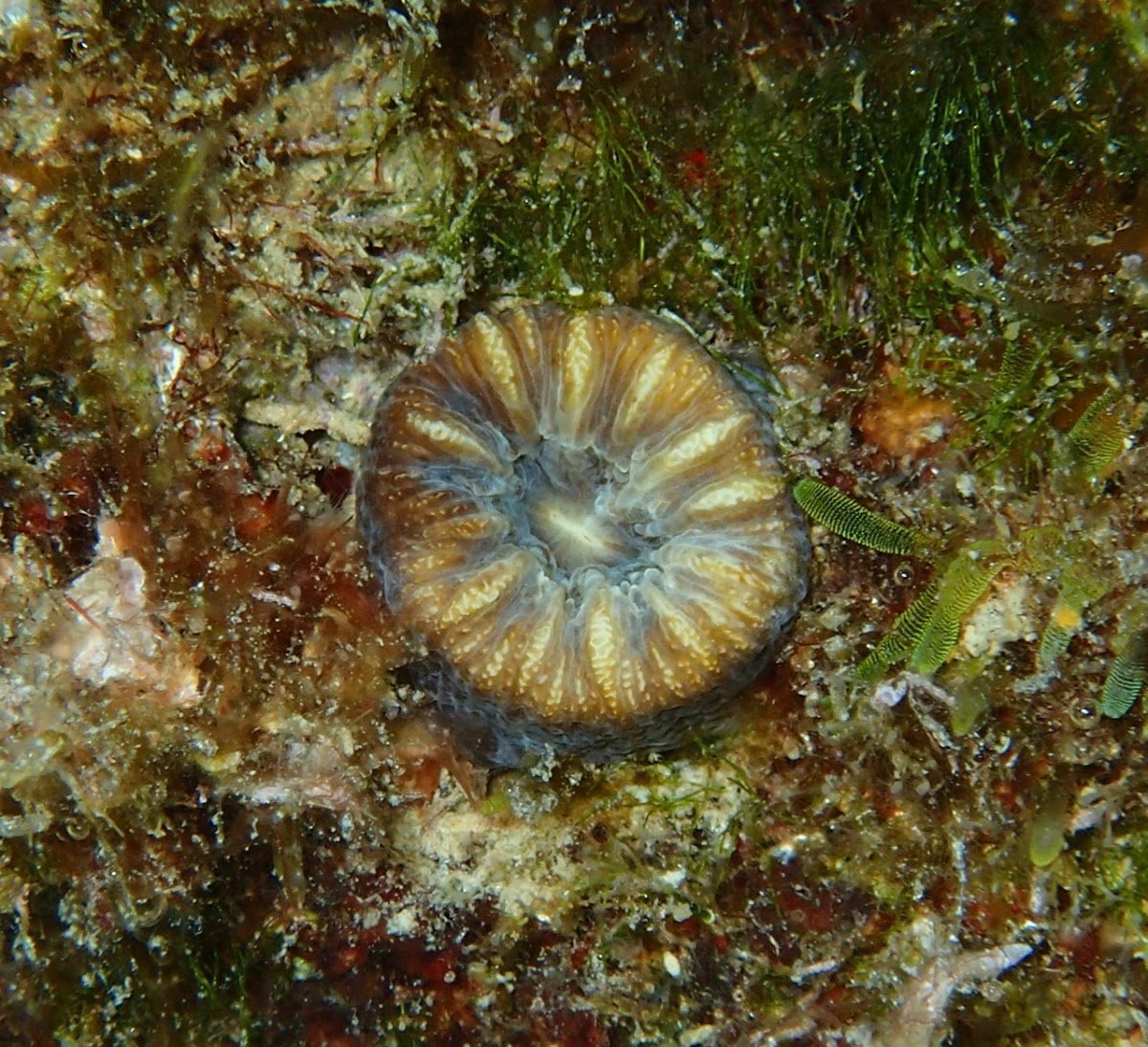 This Jelenka or Mistery blenny (Parablennius incognitus) was posing for me, displaying it's fins and horns. 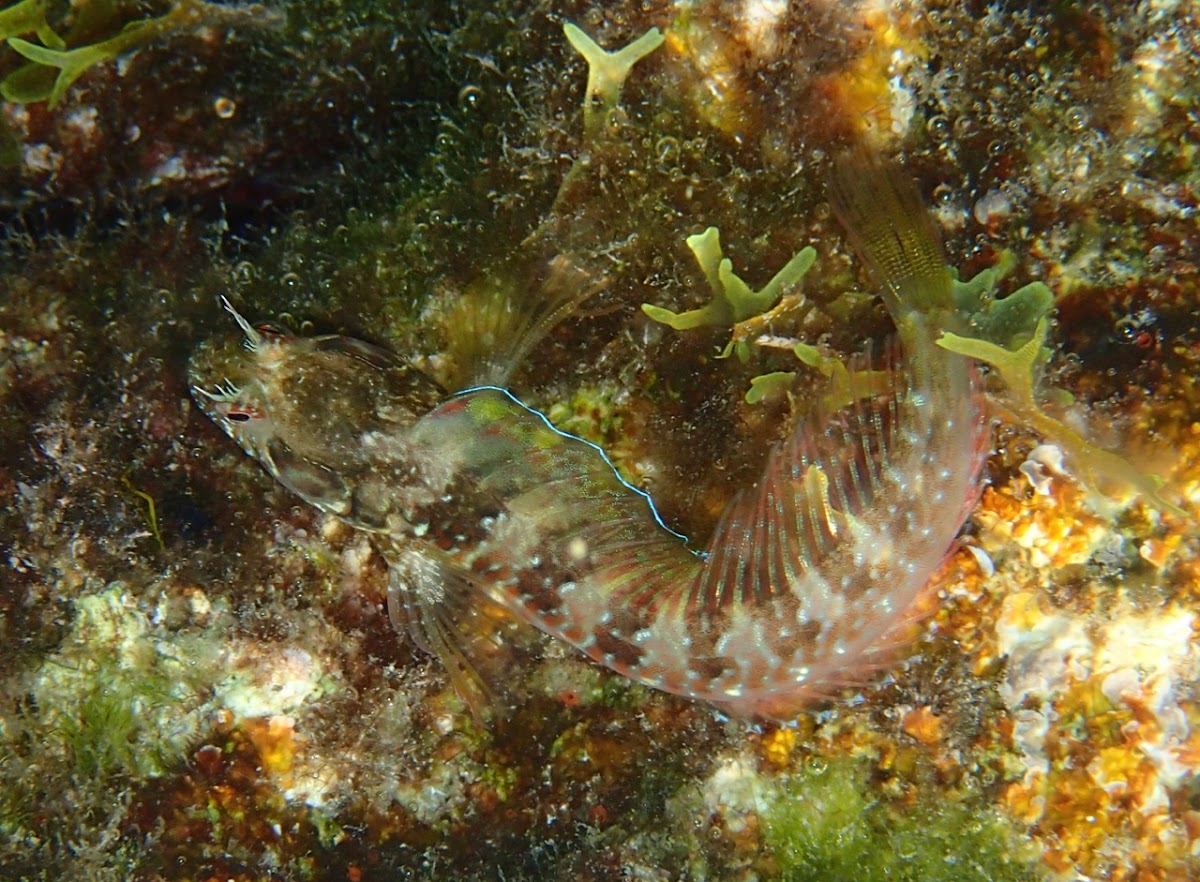 The coast was rocky with lots of overhangs and there I found Mrki glavač or  Rock goby (Gobius paganellus). 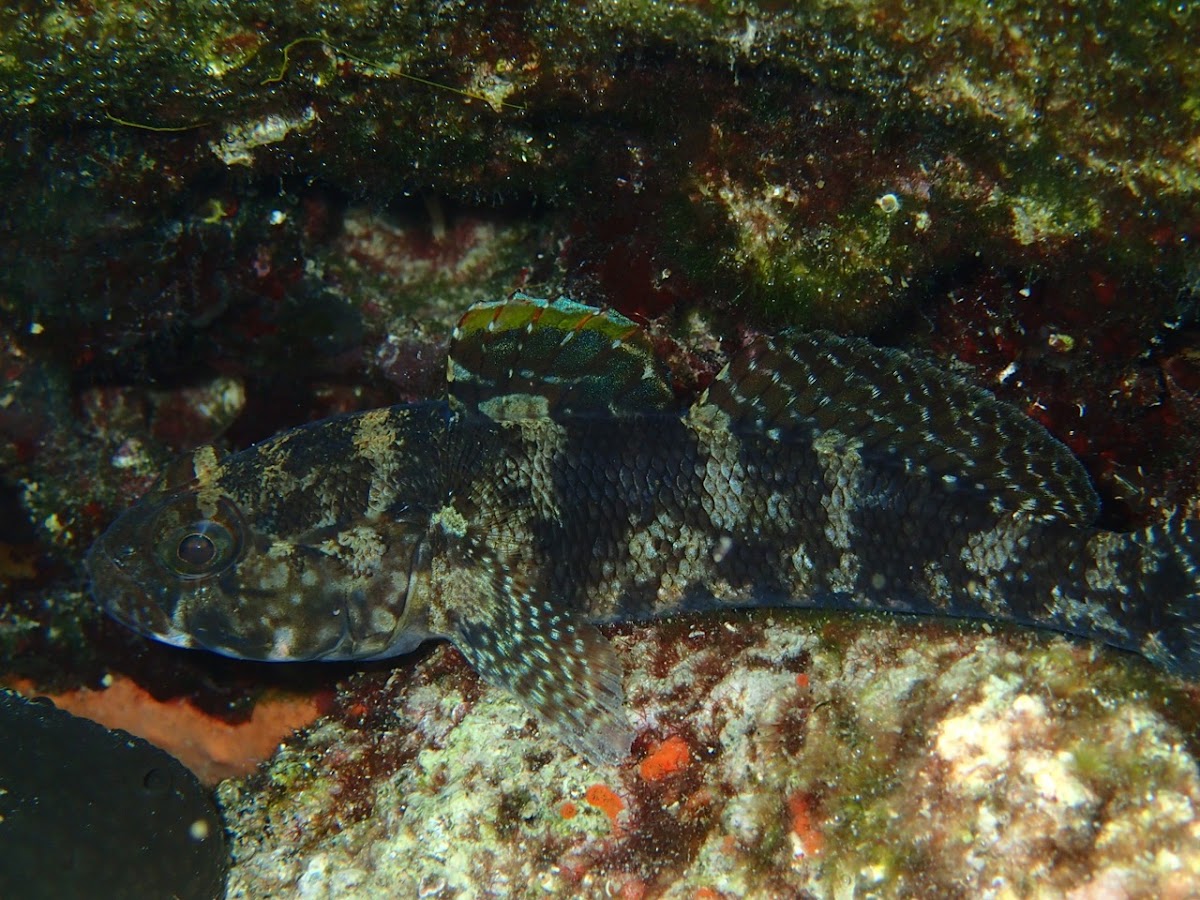 And one more kind of Blenny that I haven't seen before - it is a Dalmatinska babica or Adriatic blenny (Lipophrys adriaticus). 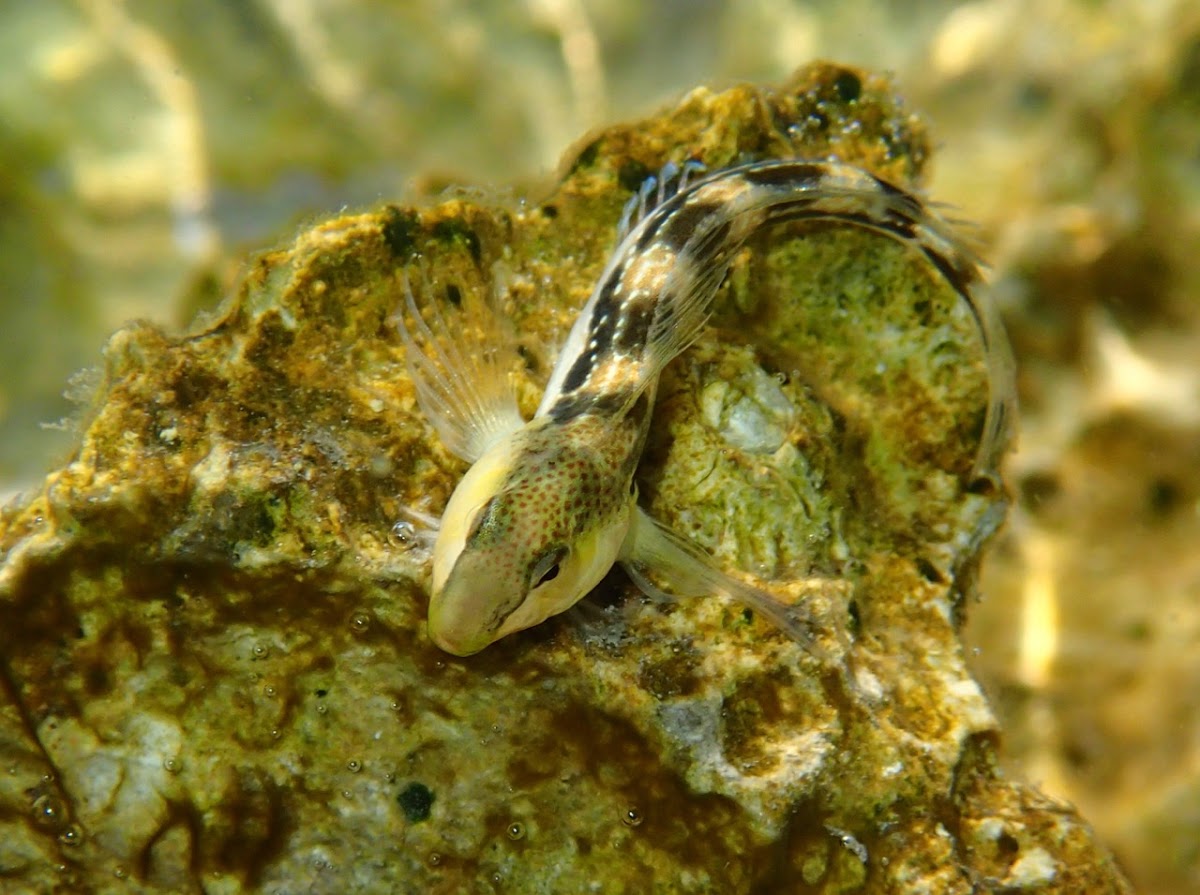 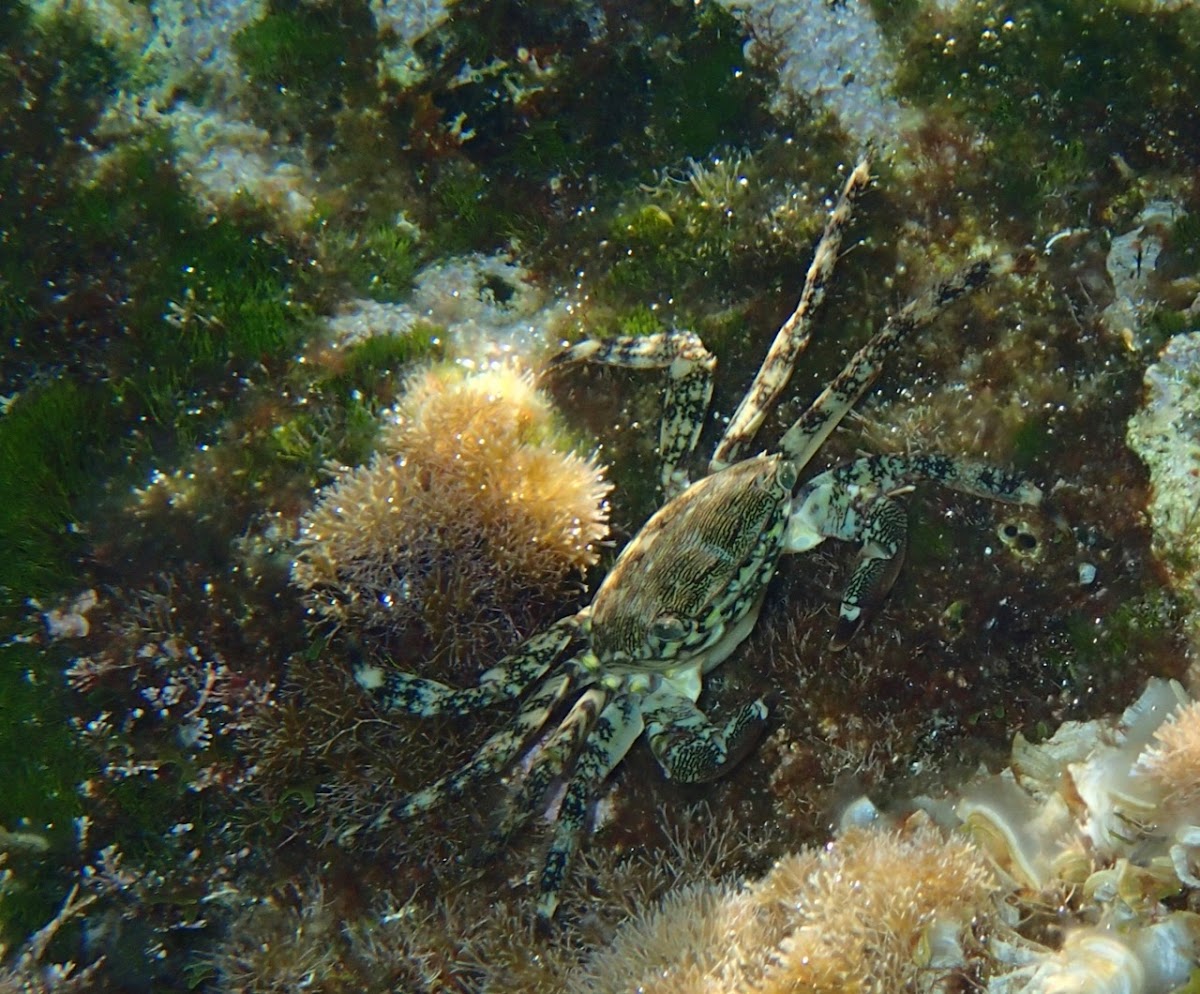 This one is not new to me, but it looked so pretty sitting on an orange sponge - it is a Črnoglava babica or Black-headed blenny (Lipophrys nigriceps) 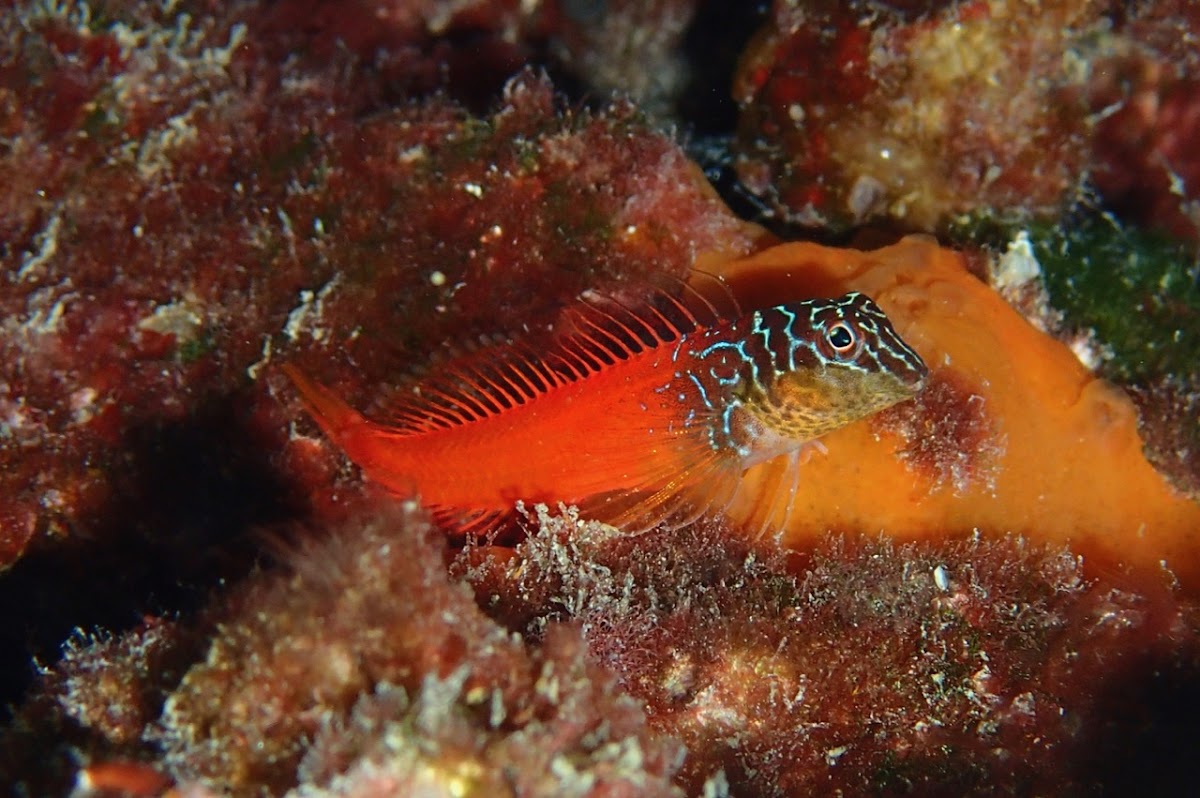 We had all this beauty to ourselves from evening to next morning. Probably thanks to the fact that there were no hotels or restaurant nearby. 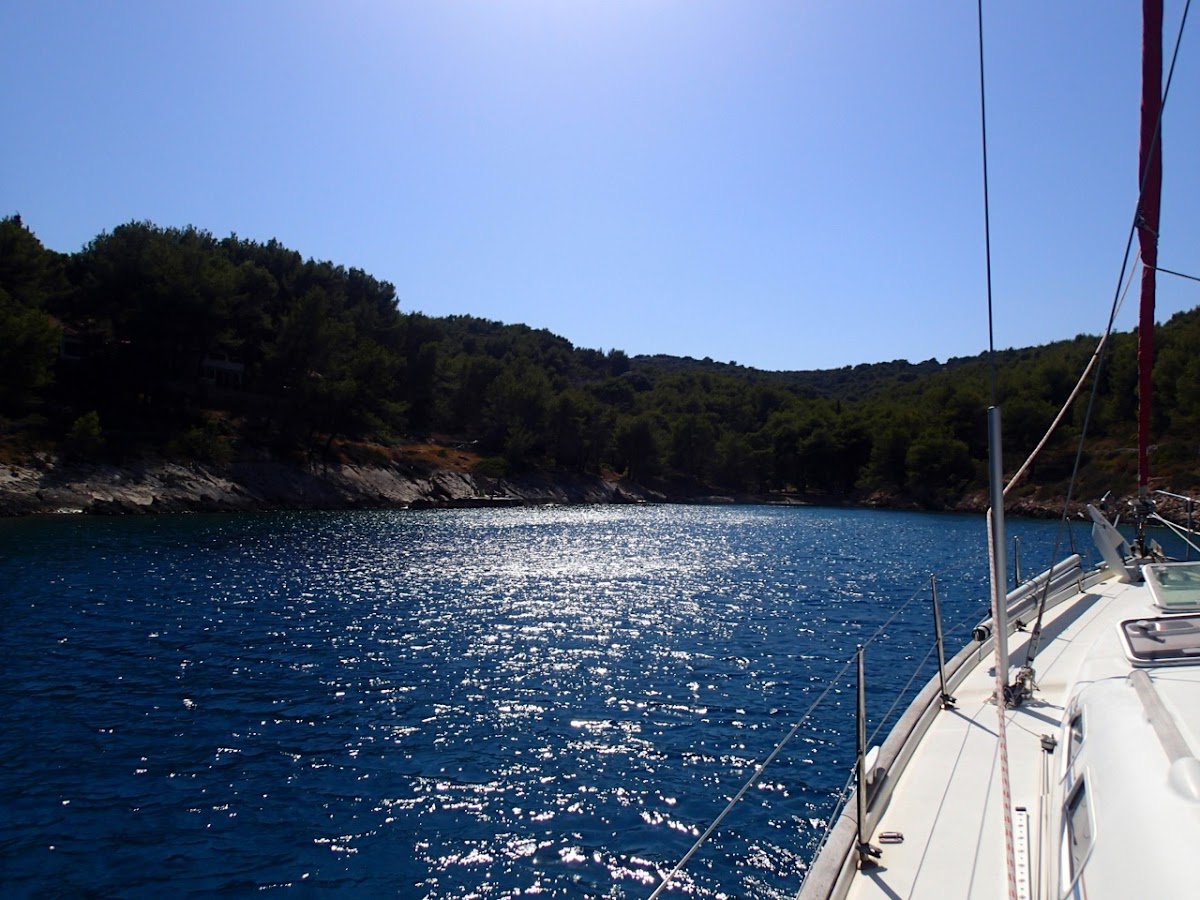 Next morning I went snorkelling even before breakfast - I was so impressed with what I saw the day before. This is a Marmornata morska vetrnica  or Trumpet anemone (Aiptasia mutabilis). 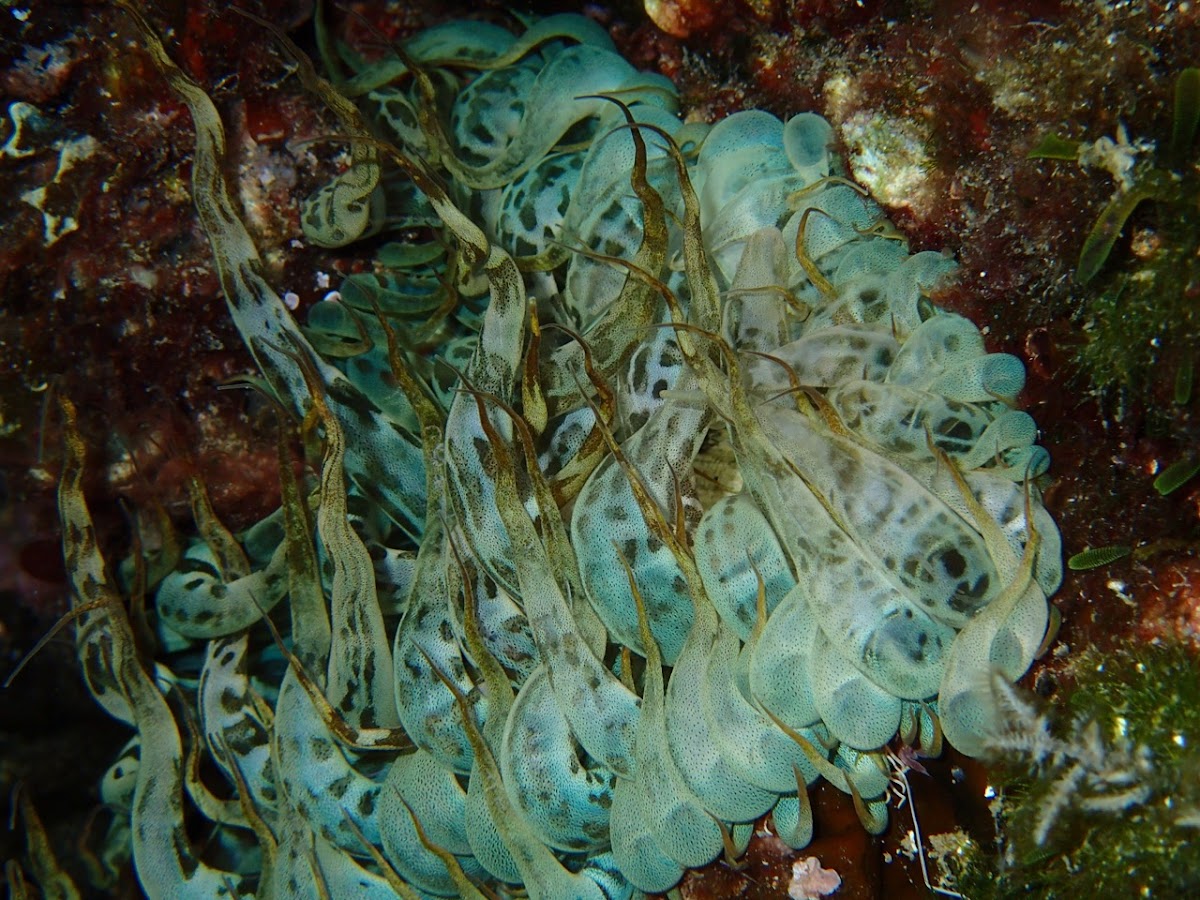 This is a Rdeči sprehajalček or Red-black triplefin (Tripterygion tripteronotus), this time in more dull, non-mating colours, but with parasite. 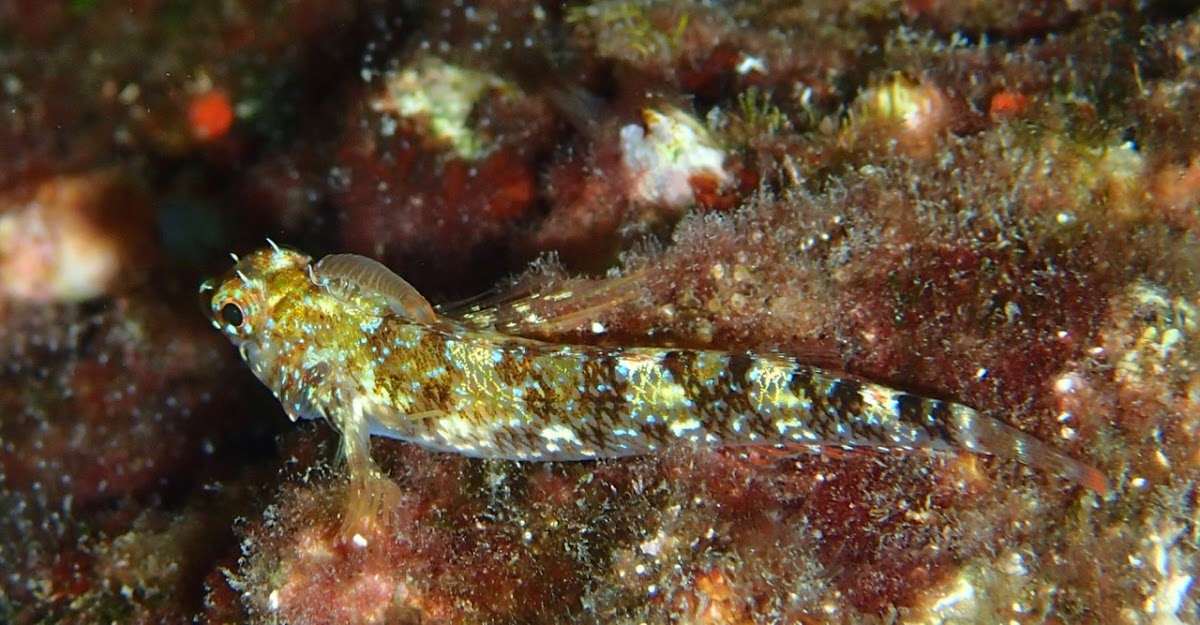 Under one of the overhangs I found two Brancin or  European seabass (Dicentrarchus labrax). 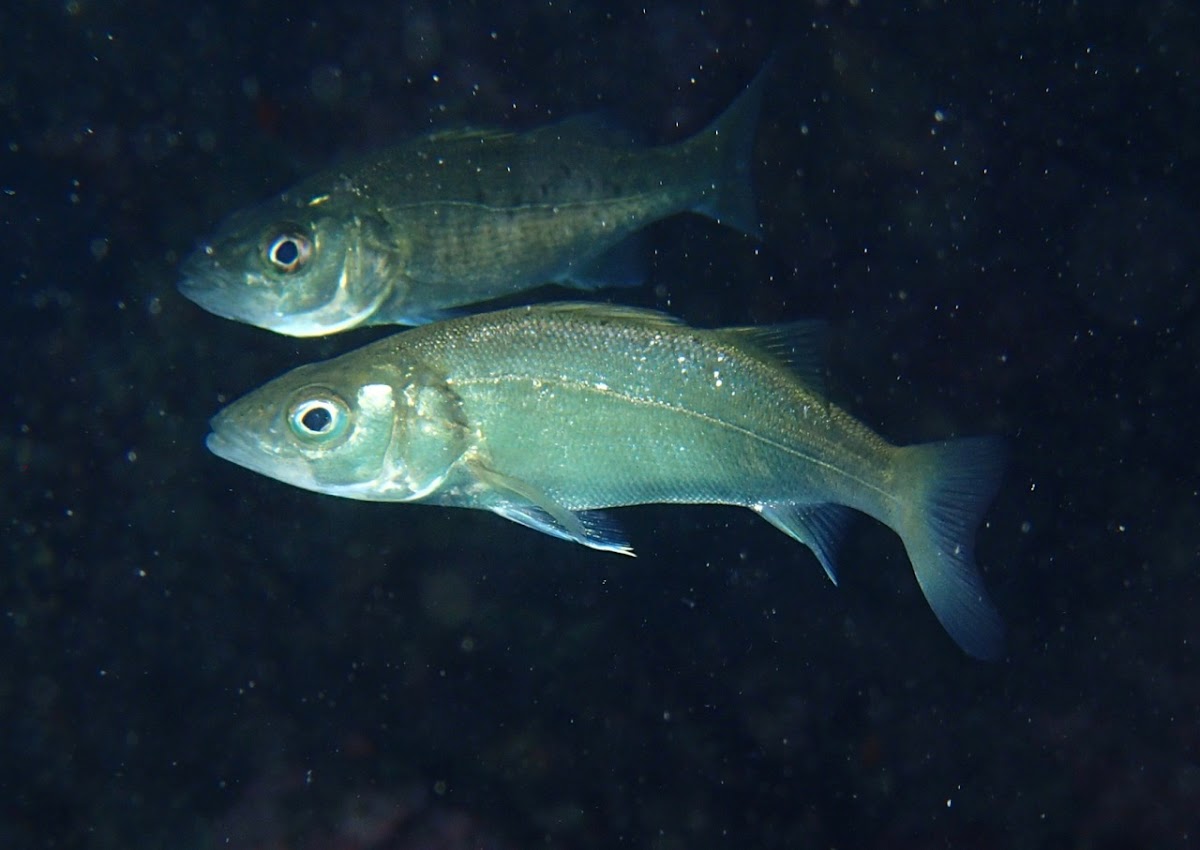 There were also clusters of Jadranska kamena korala or Pillow coral (Cladocora caespitosa), it is the only coral in Mediterranean that is building coral reefs. 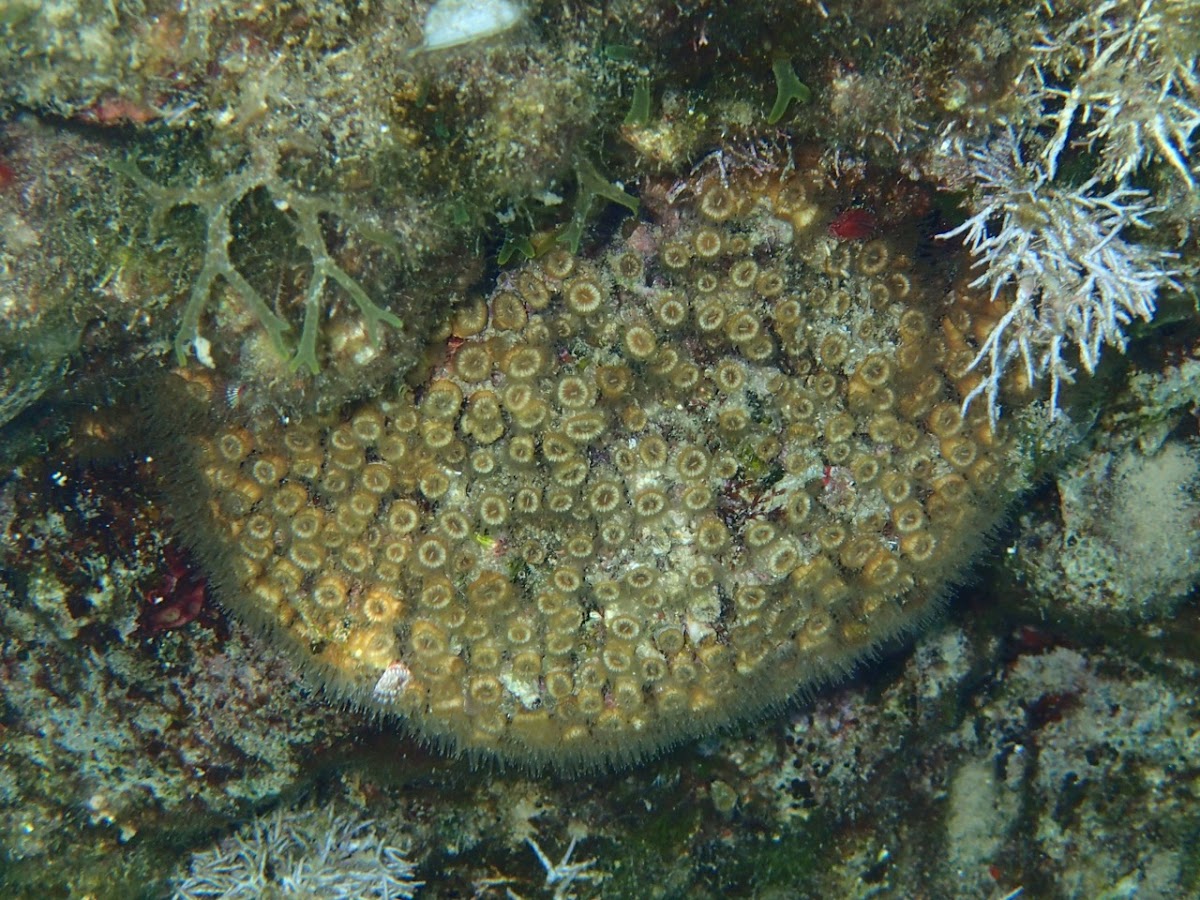 These guys are really big, this one looked like it weight 1kg. It is a Kosmelj or Warty crab (Eriphia verrucosa). 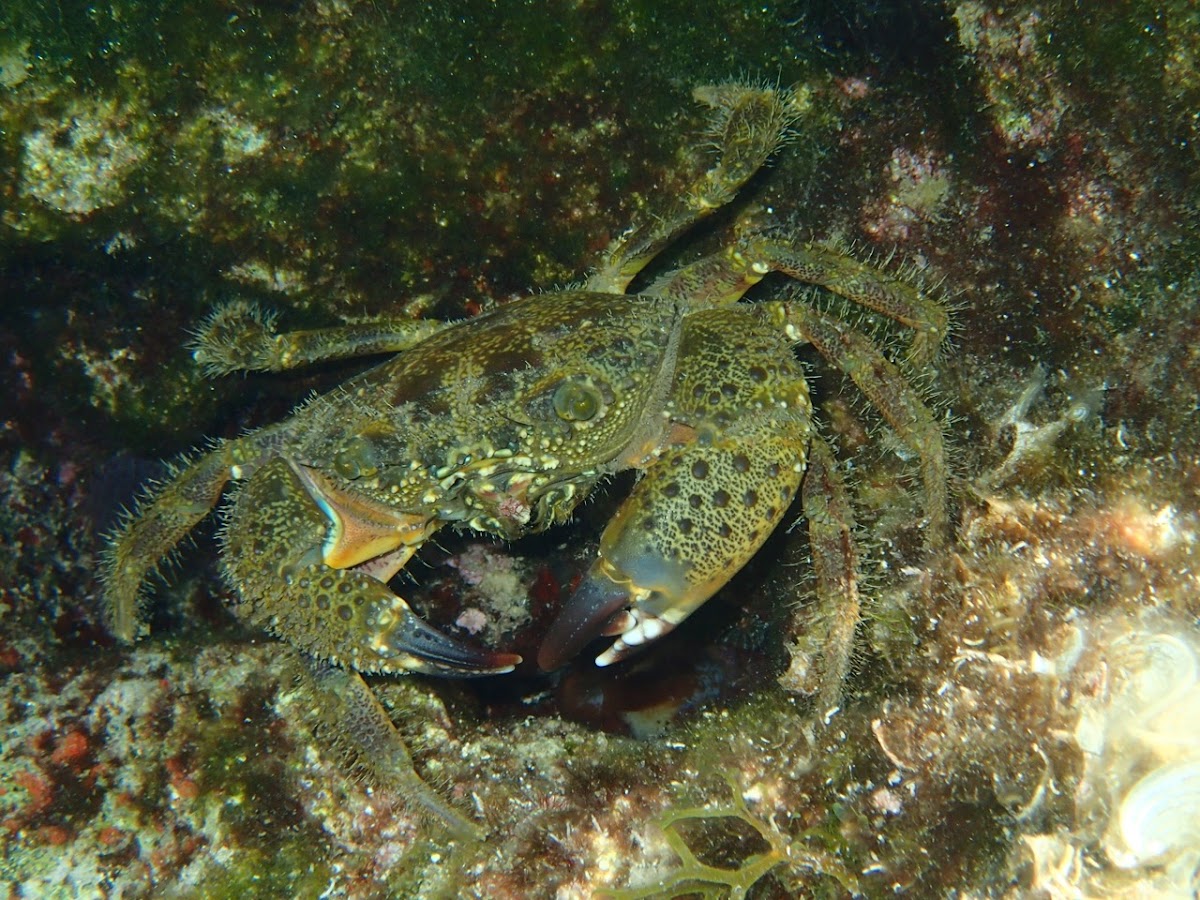 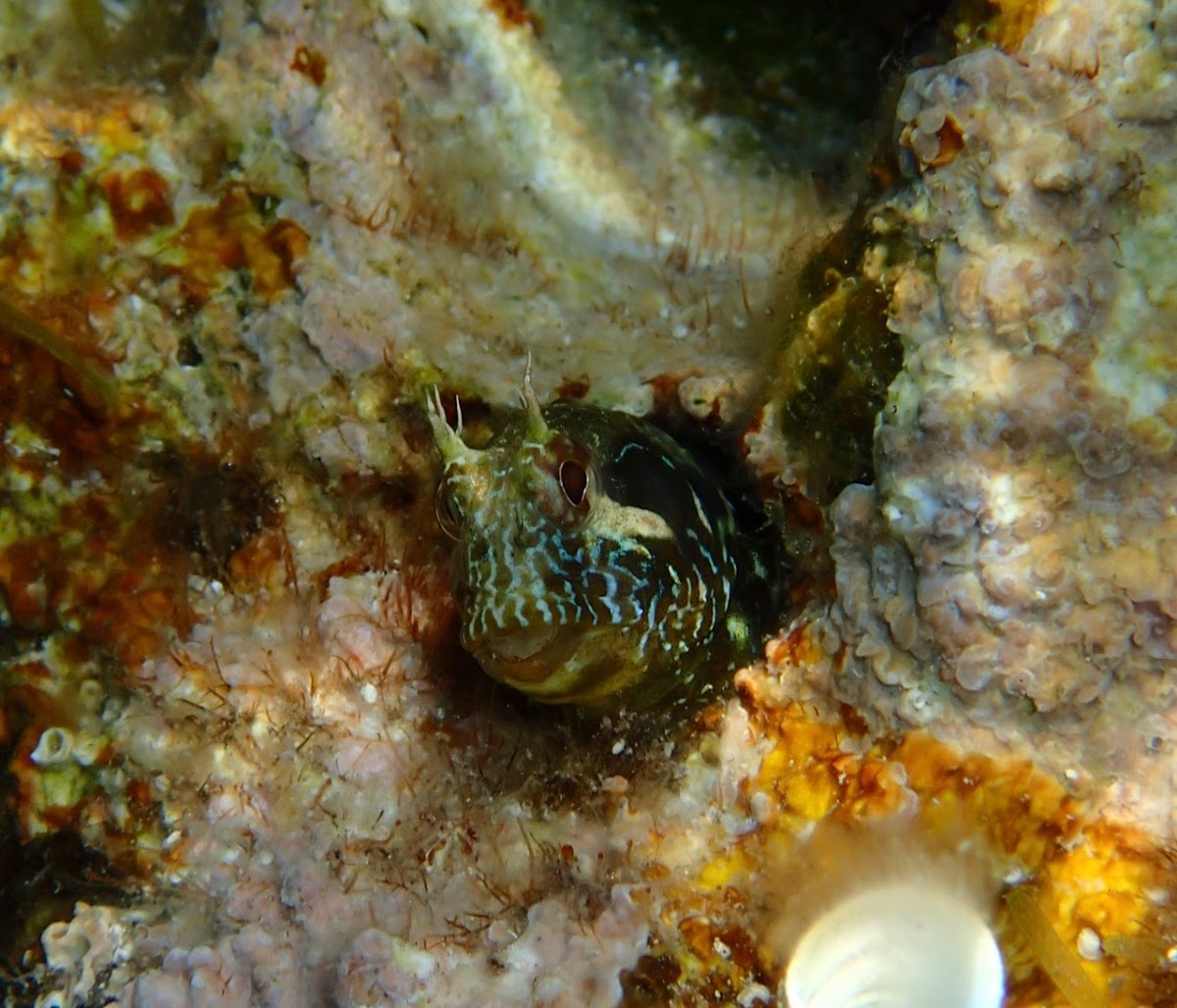