The other day I saw a tv documentary about the sharks in Palau. As everywhere else in the world sharks are being ruthlessly finned there - "shark-finning" is the process of catching sharks, cutting off their fins and throwing the rest of the fish, still alive, back into the ocean to die. Sharks drown because they cannot swim without fins. Sharks in Palau are not fished by the locals, but by foreign ships and the fins end up mostly in China, Taipei and Honk Kong. Not only is Palau robbed of it's sharks, the profits also end up elsewhere. Locals have traditionally great respect for sharks and are aware of how important sharks are for tourism. They founded Palau Shark Sanctuary and I really hope they will succeed in protecting their sharks.

It reminded me of a adventure we had with sharks in Mauritius. In 2003 we were there on holiday and booked several scuba-diving trips with the local diving shop. Diving was really good, mostly thanks to Feroz, the dive master, that took us to great diving sites and was able to show us even the smallest beauties. 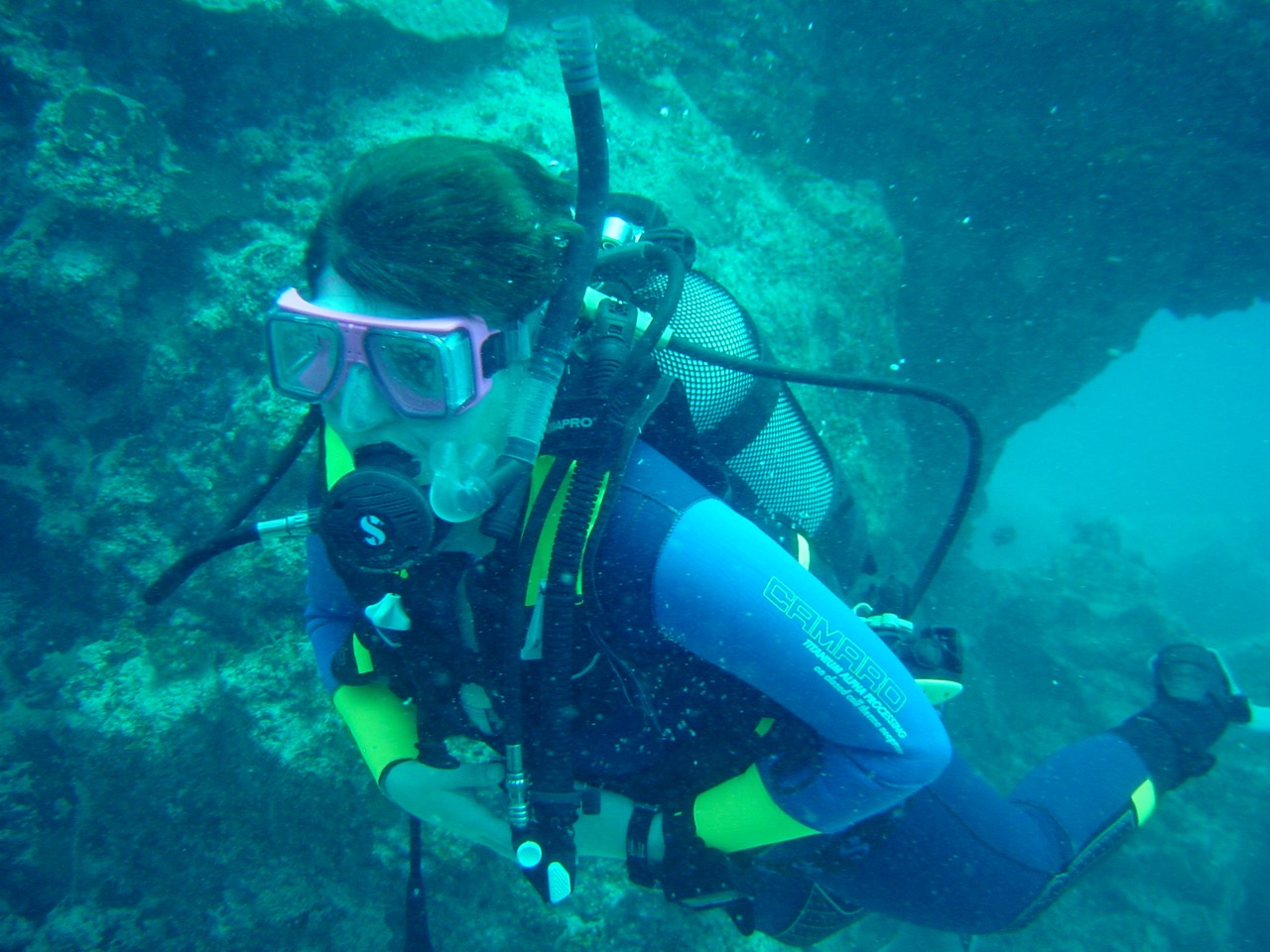 .... and this is Feroz's hand with nudibranch on it. Sorry for the quality of photos, but these were the early days of our under-water photography. 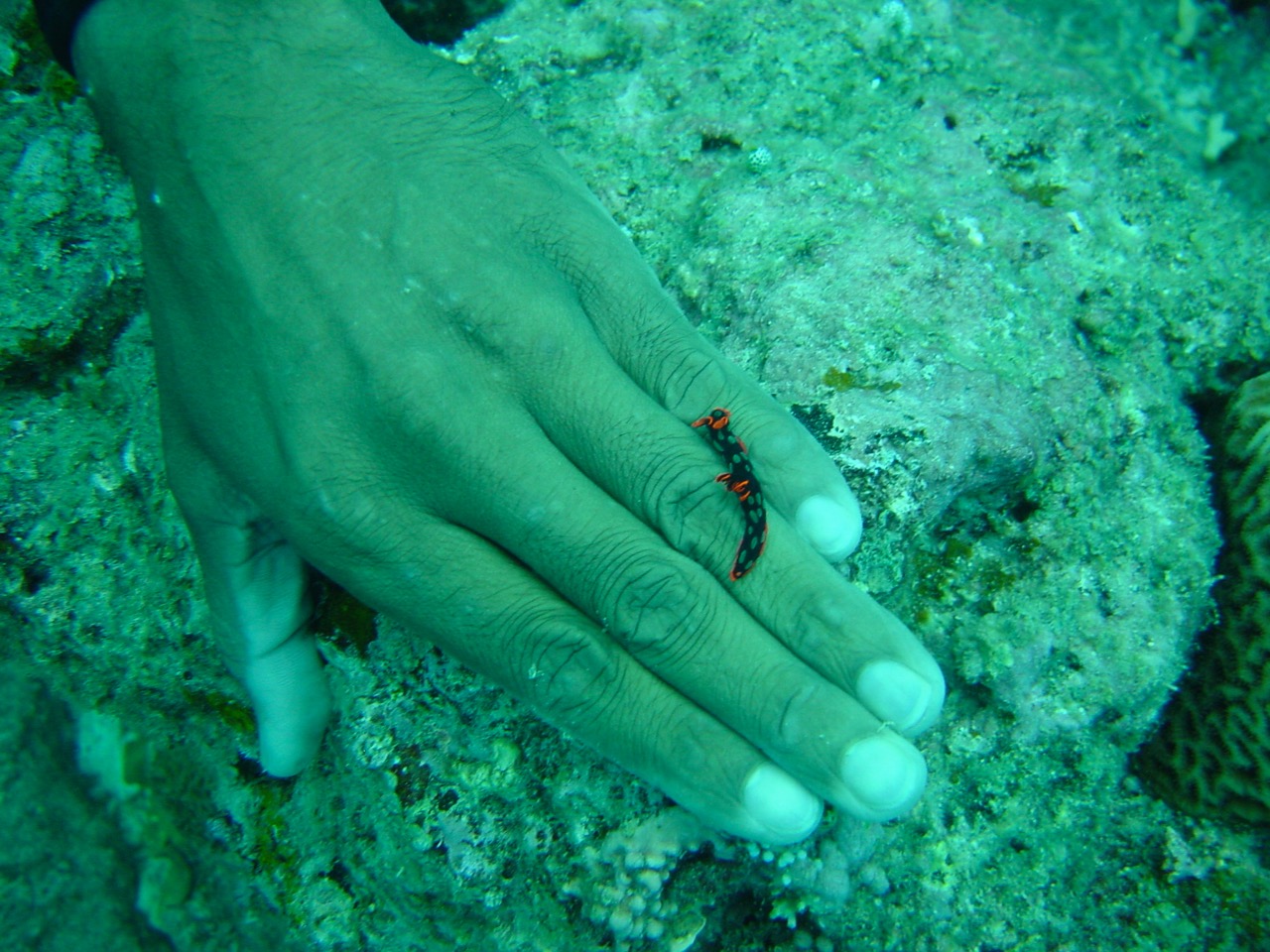 One day Feroz suggested we should visit the site called "Shark pit". The site is at the small island several miles from Mauritius, only accessible in good weather. It took an hour to get there with fast motorboat and we planned to make two dives. First was the "Shark Pit". The site looks like a big sunken bowl, around 14m deep in the middle, with the "rims" also couple of meters under water. Waves break over these rims and the water is full of small air bubbles. It is assumed that this is the reason why sharks gather in this bowl in such a numbers, they slowly circle the bowl and enjoy oxygenated sea. It was not easy to get over the rim of the bowl through the breaking waves. Once inside, we positioned ourselves at the bottom near a big rock. And then the show begun. There were at least 15 grey reef sharks, circling the bowl, and all the time keeping their eyes on us. If we would try to get closer to them, they would swim away. So we just sat there, very still and calm, for almost an hour. 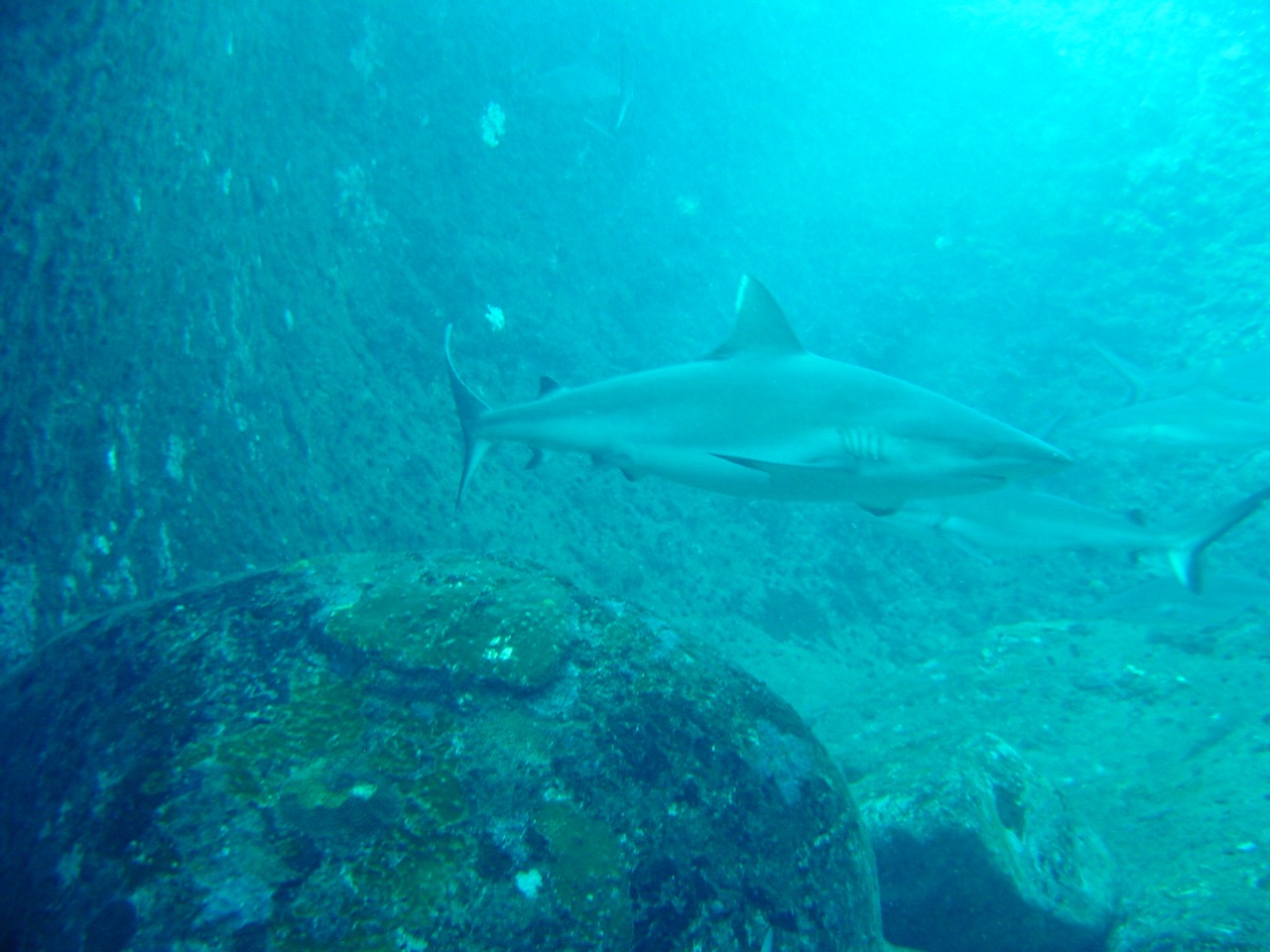 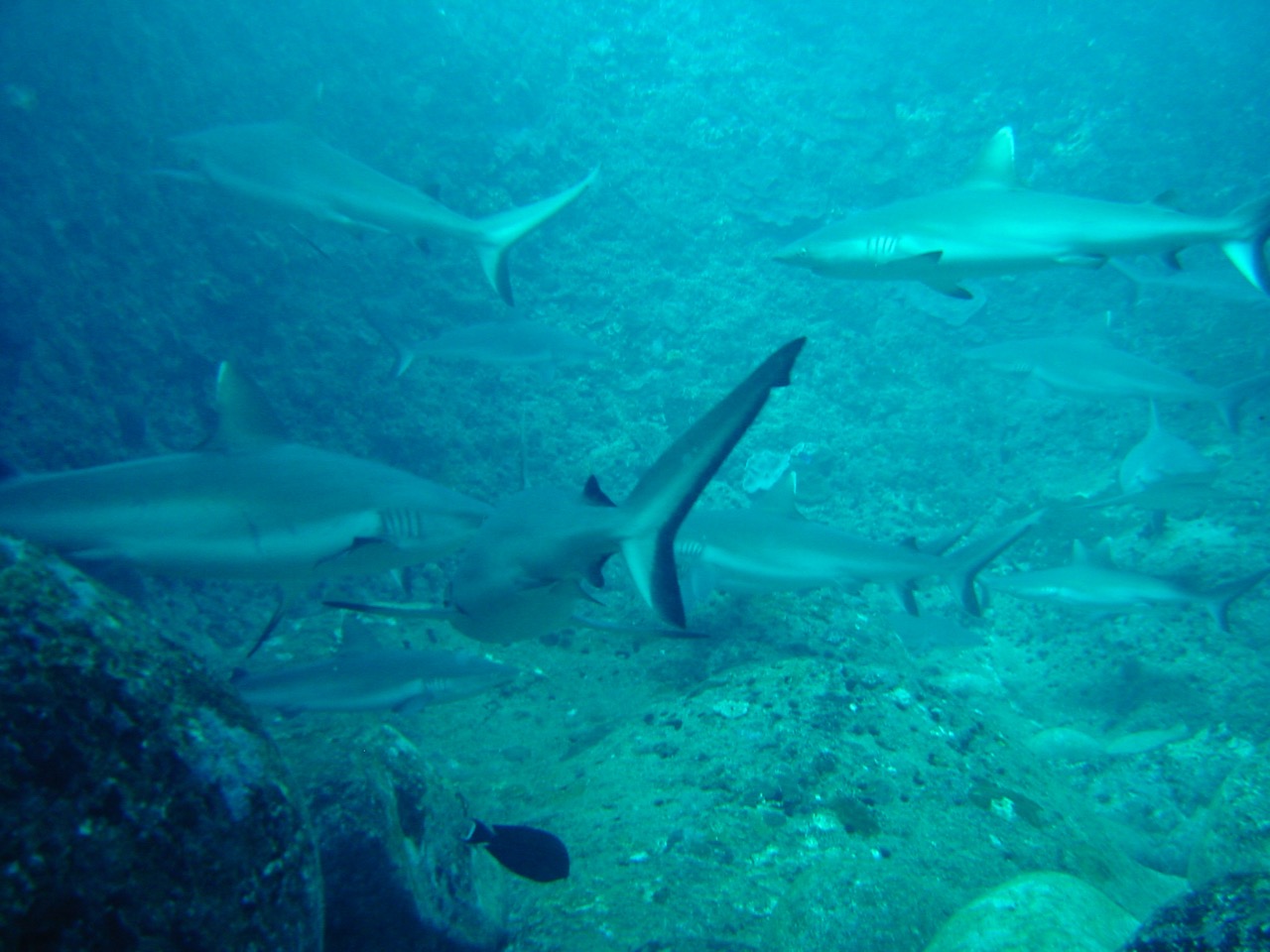 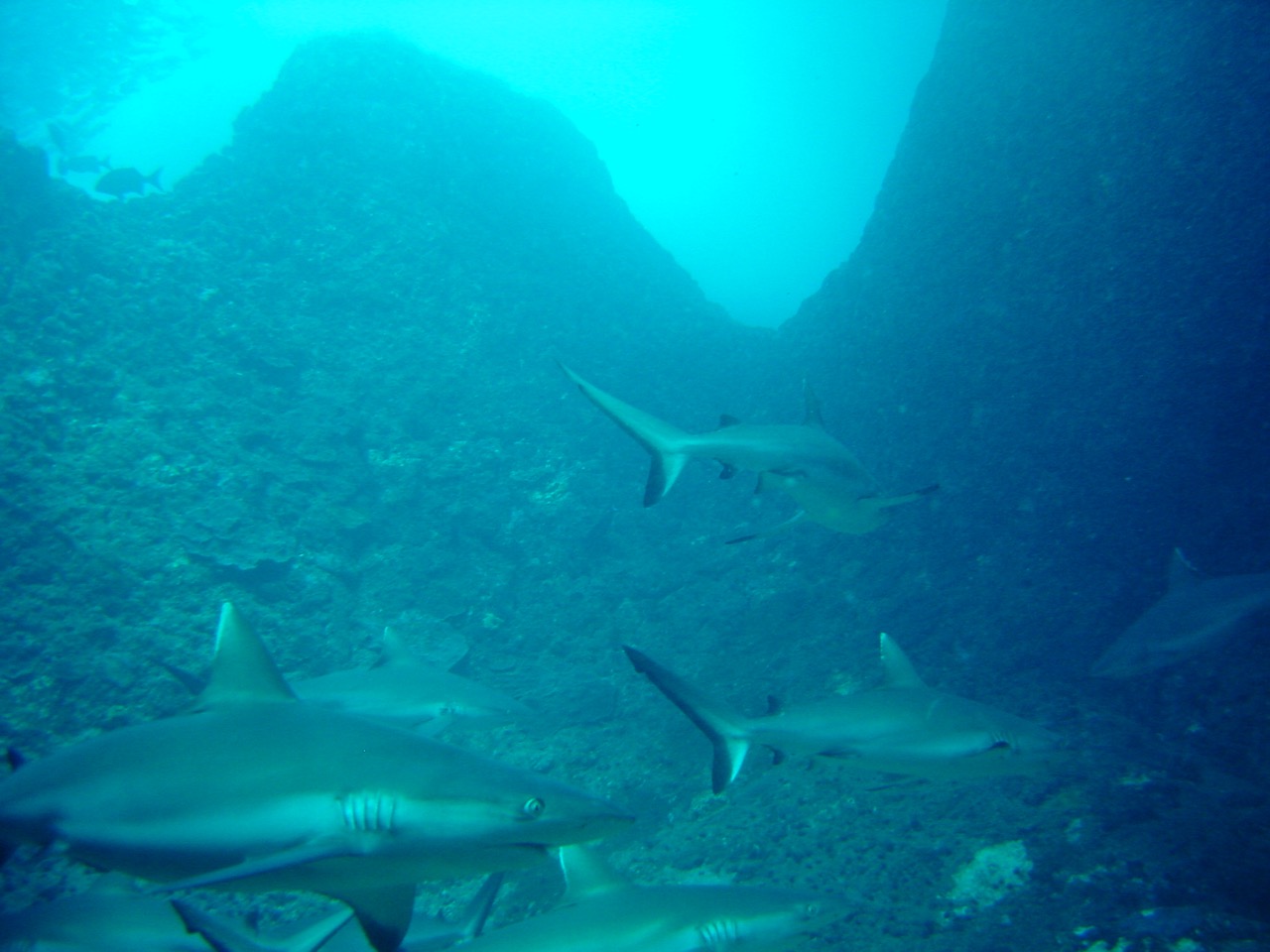 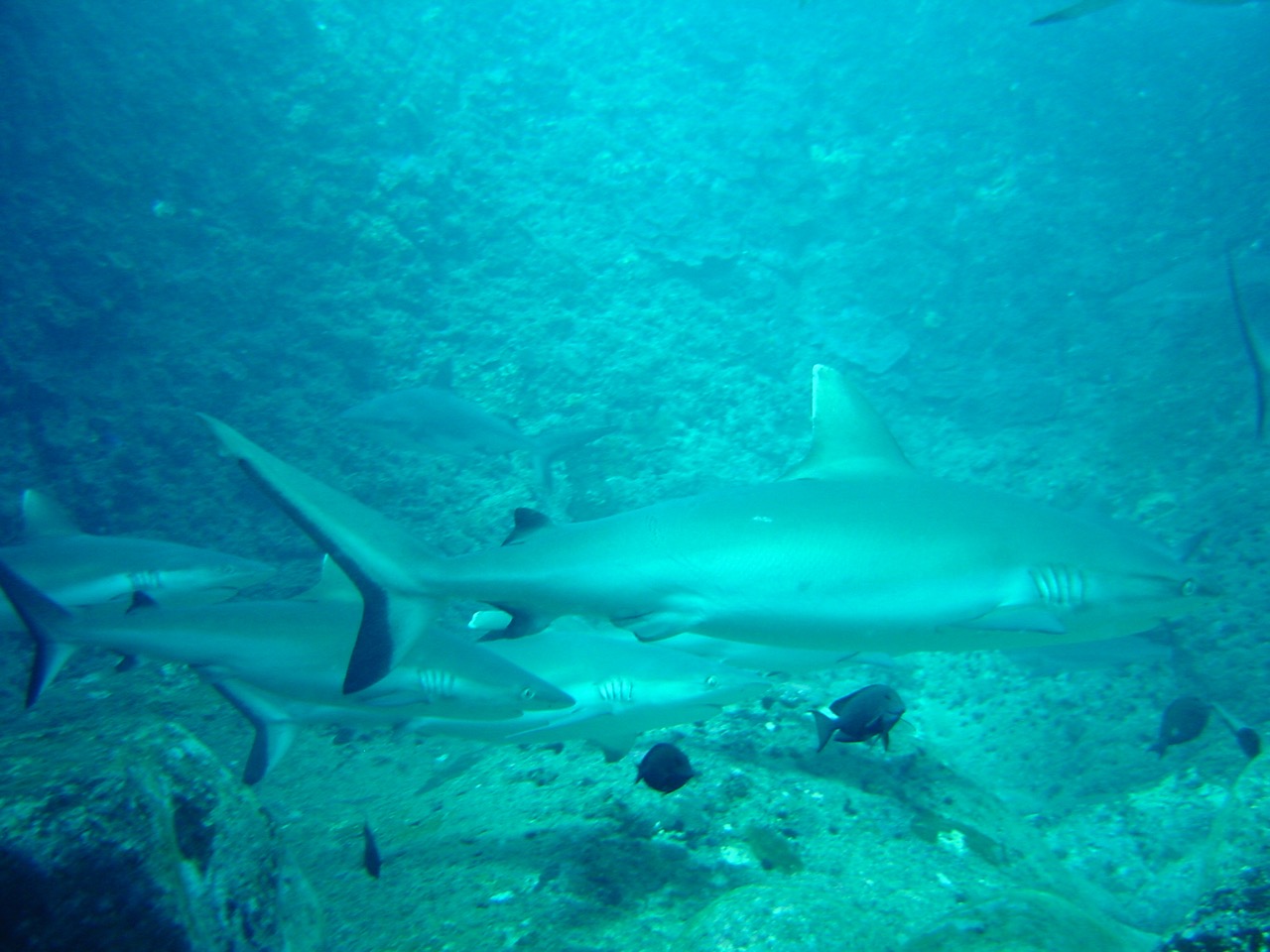 This is taken without the zoom. 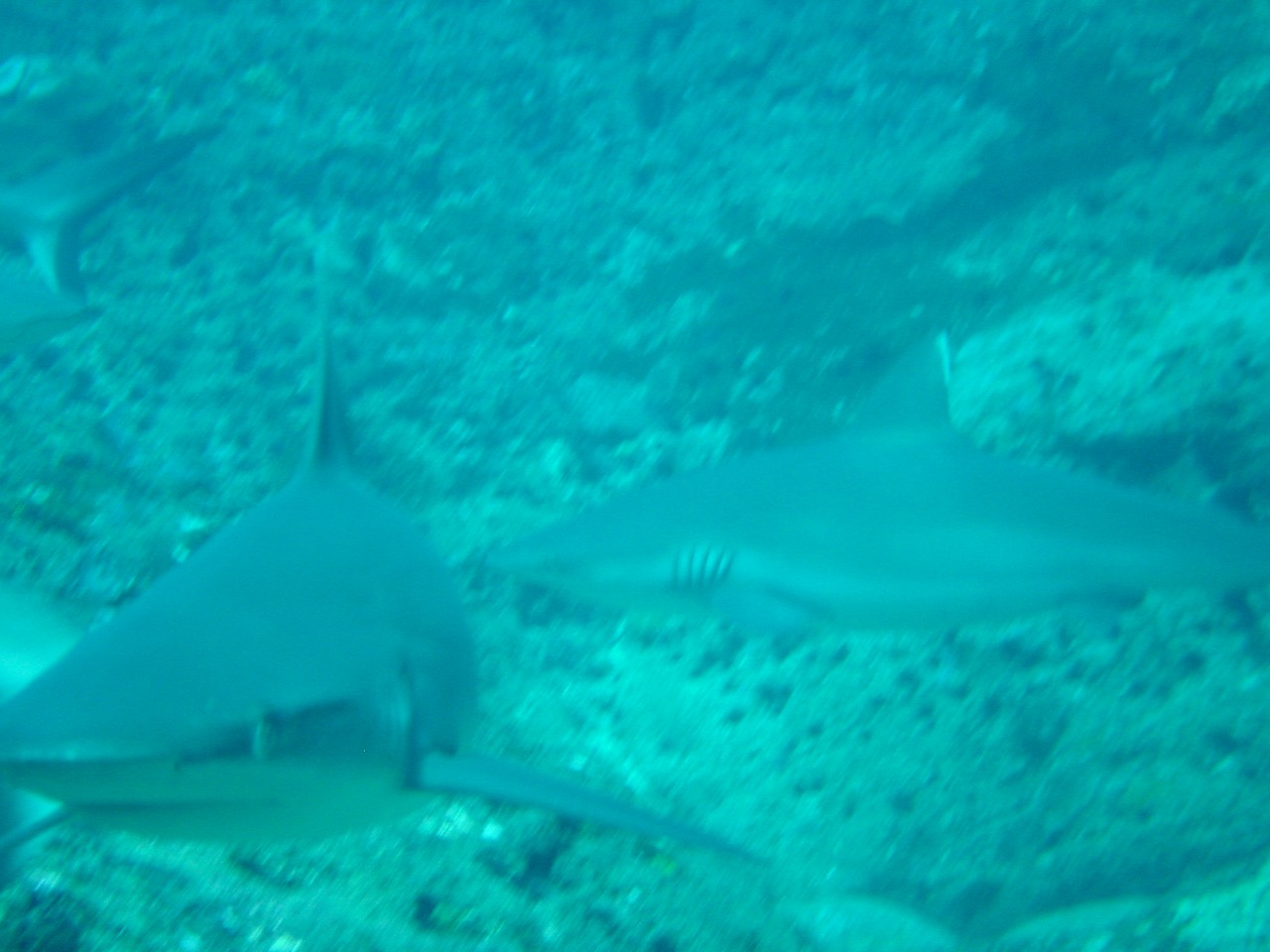 This also, my eyes were really that wide. 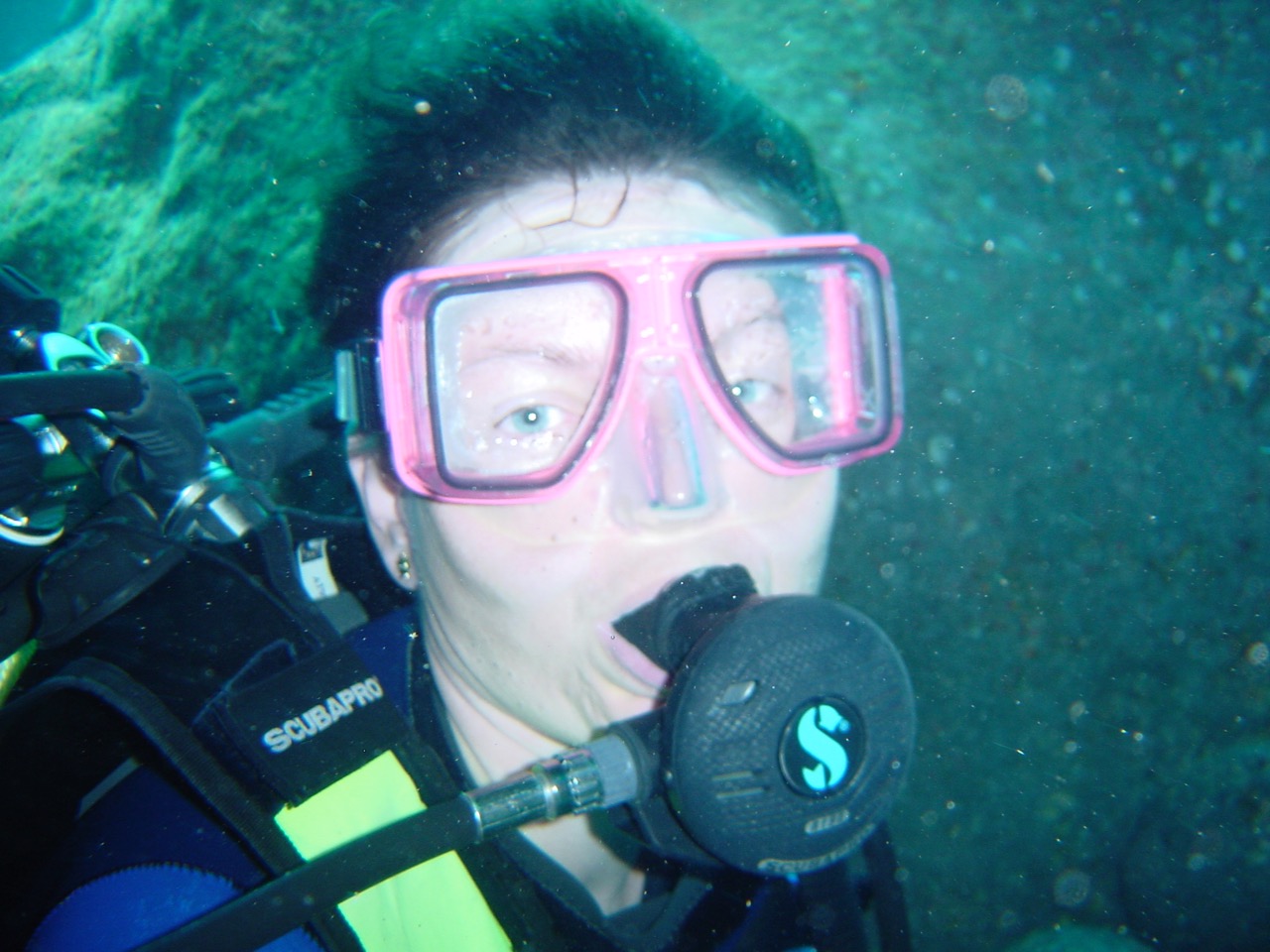 Here you can see the bubbles in the water. 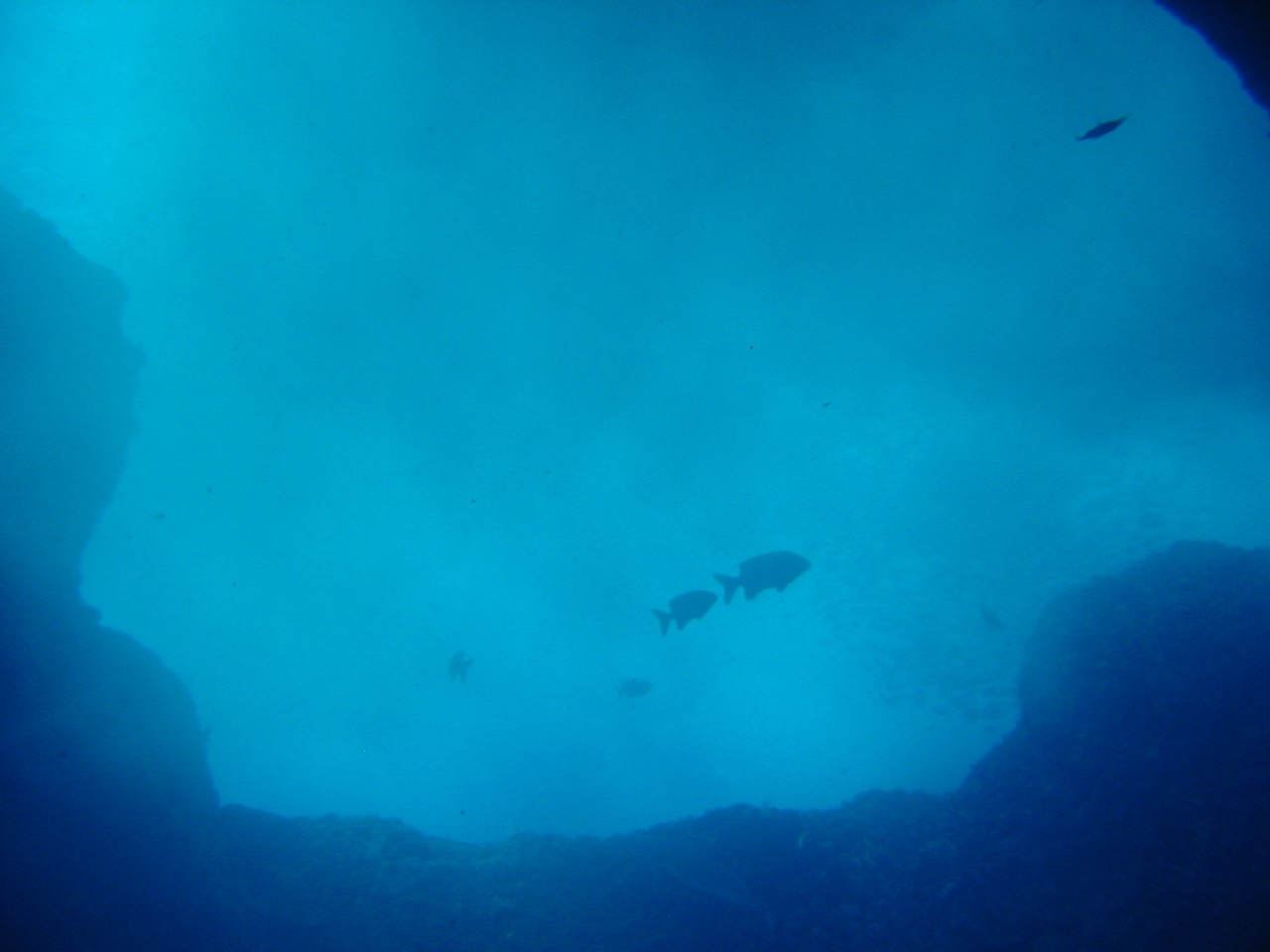 My favourite shark was the one with the broken back fin, looked a bit like a killer whale. 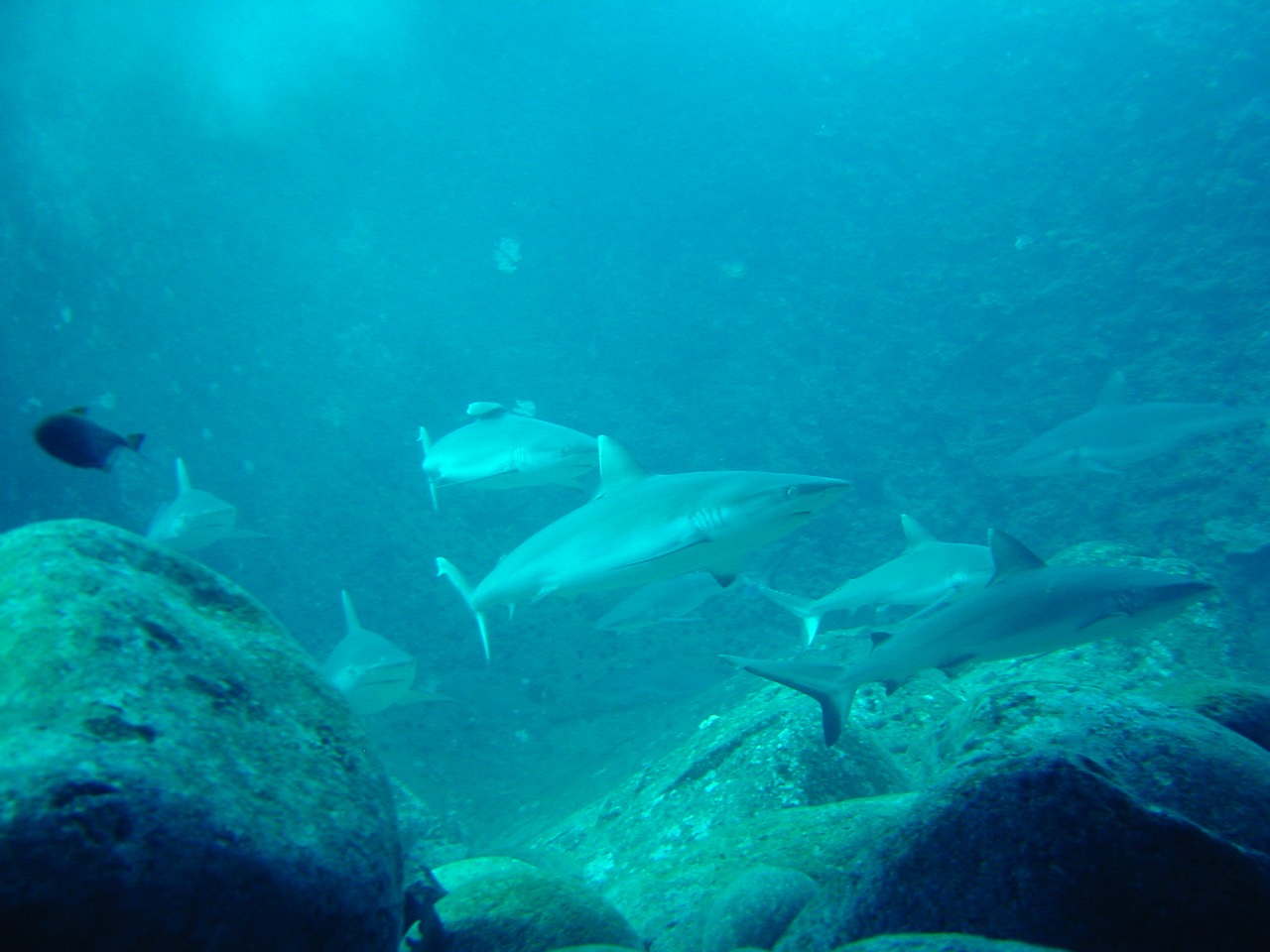 Other fish felt overlooked and often forced themselves in front of the camera. 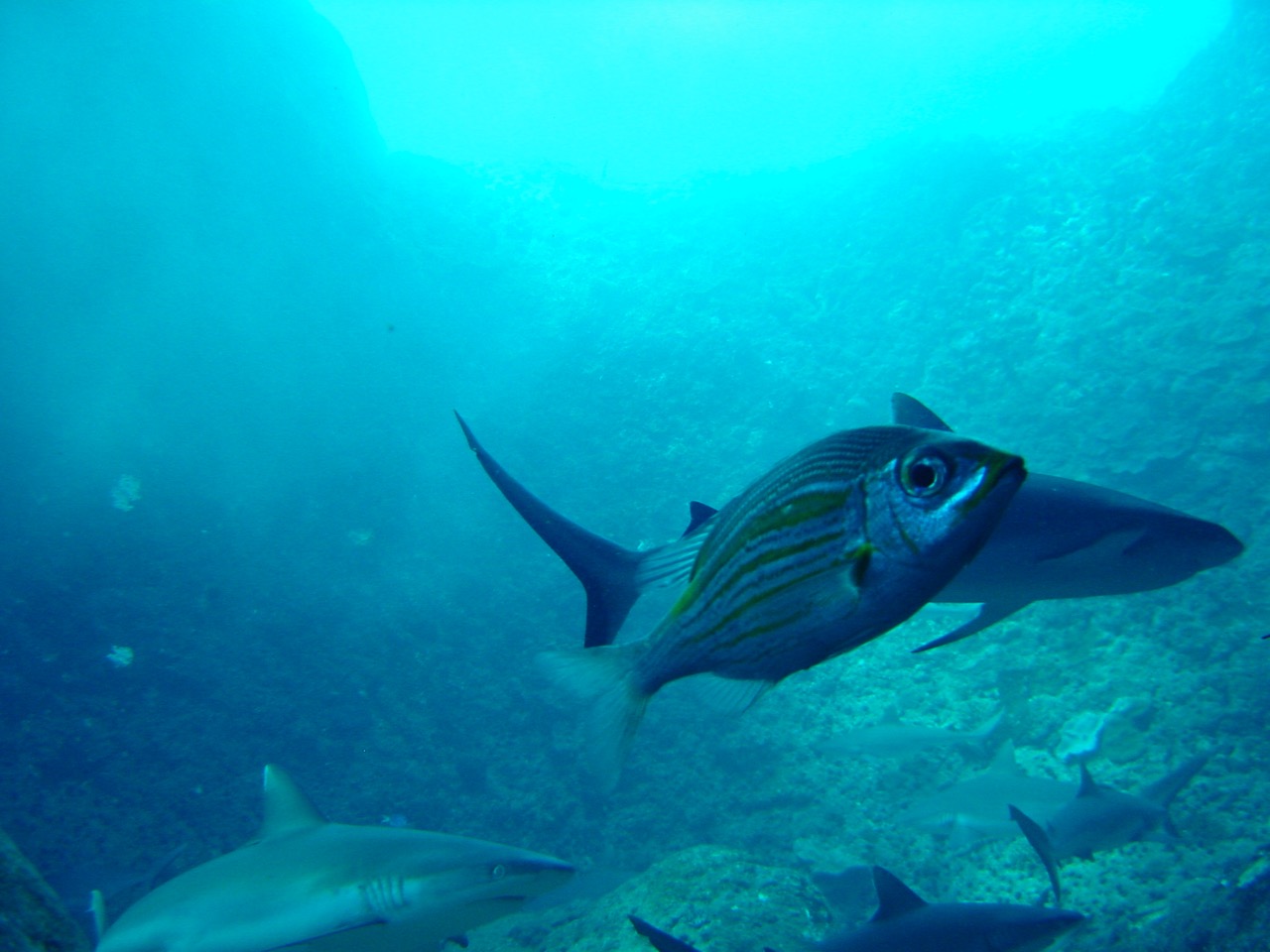 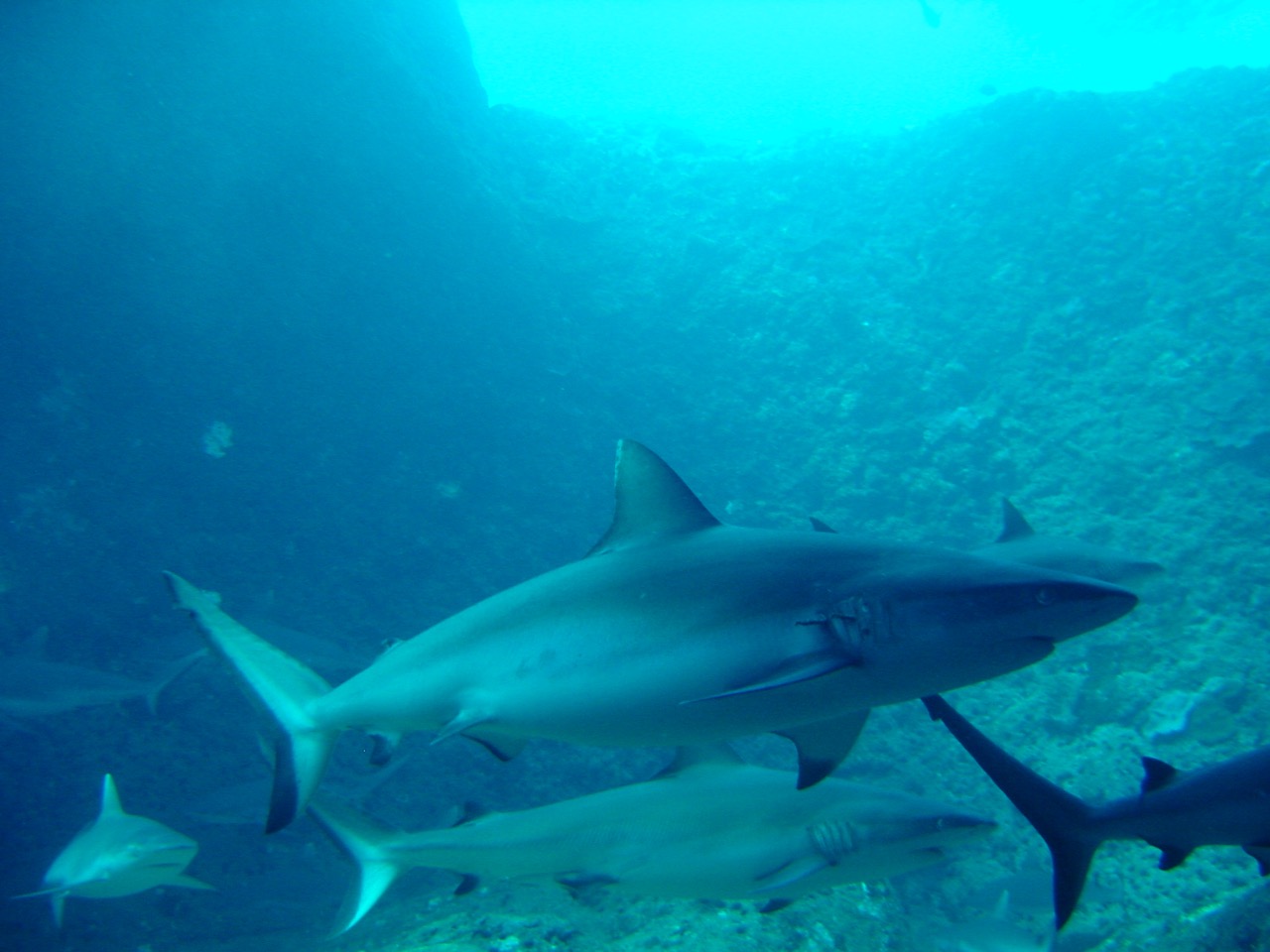 Feroz and myself on the boat after the first dive. 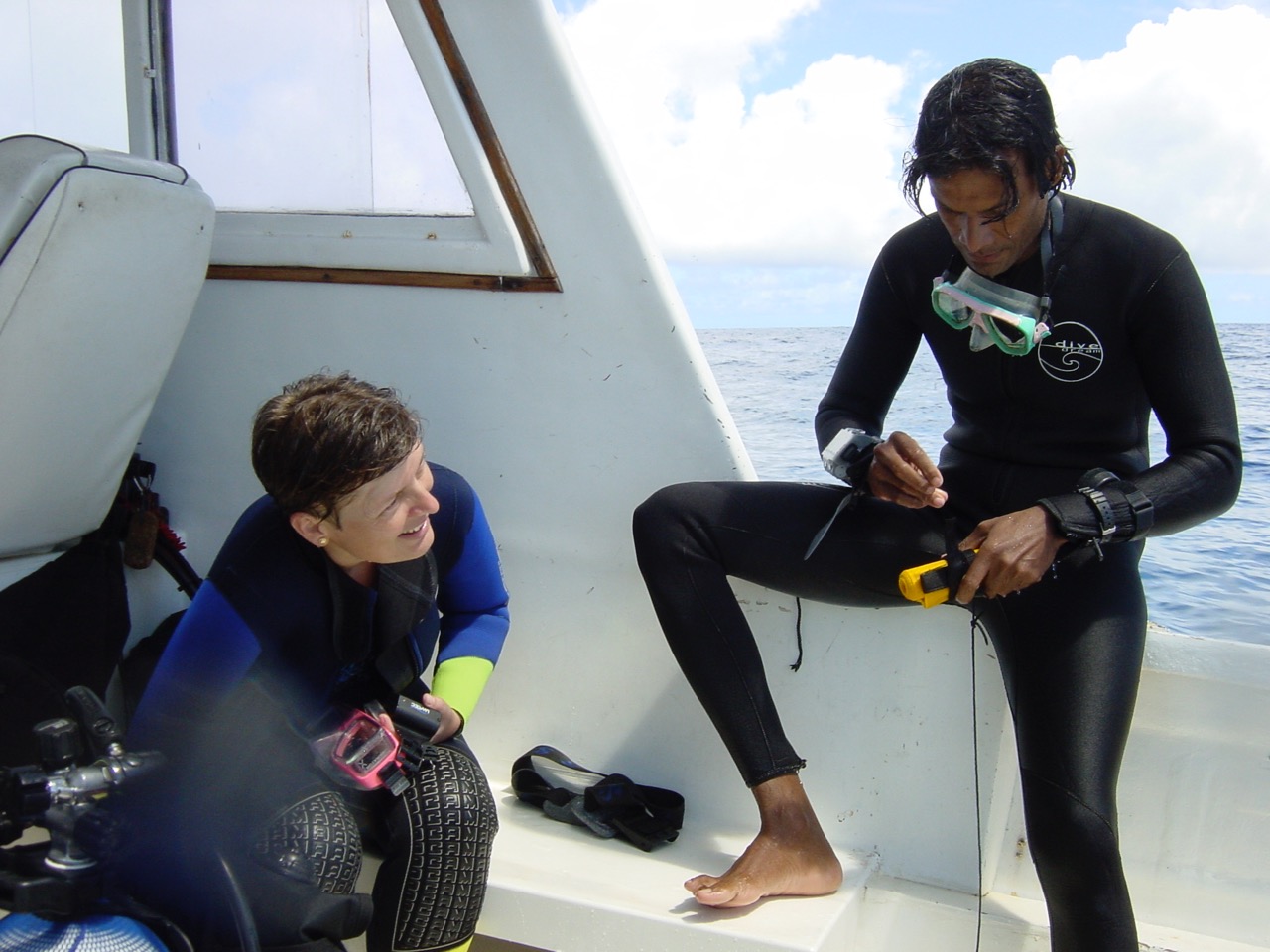 The second dive on the other side of the island, here we are posing between the gorgonian corals. 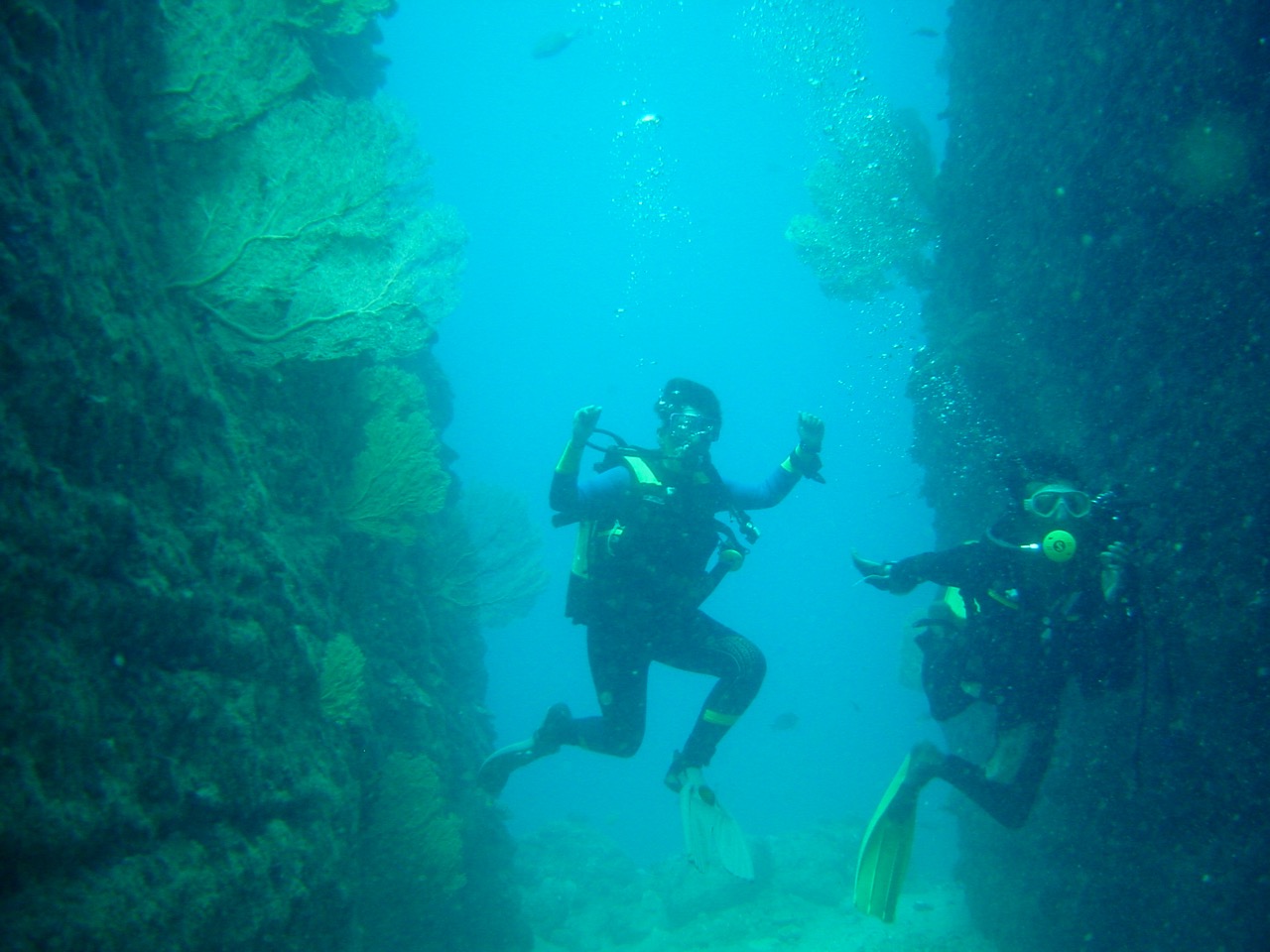 And this is captain riding a bike, on a dive a couple of days later. 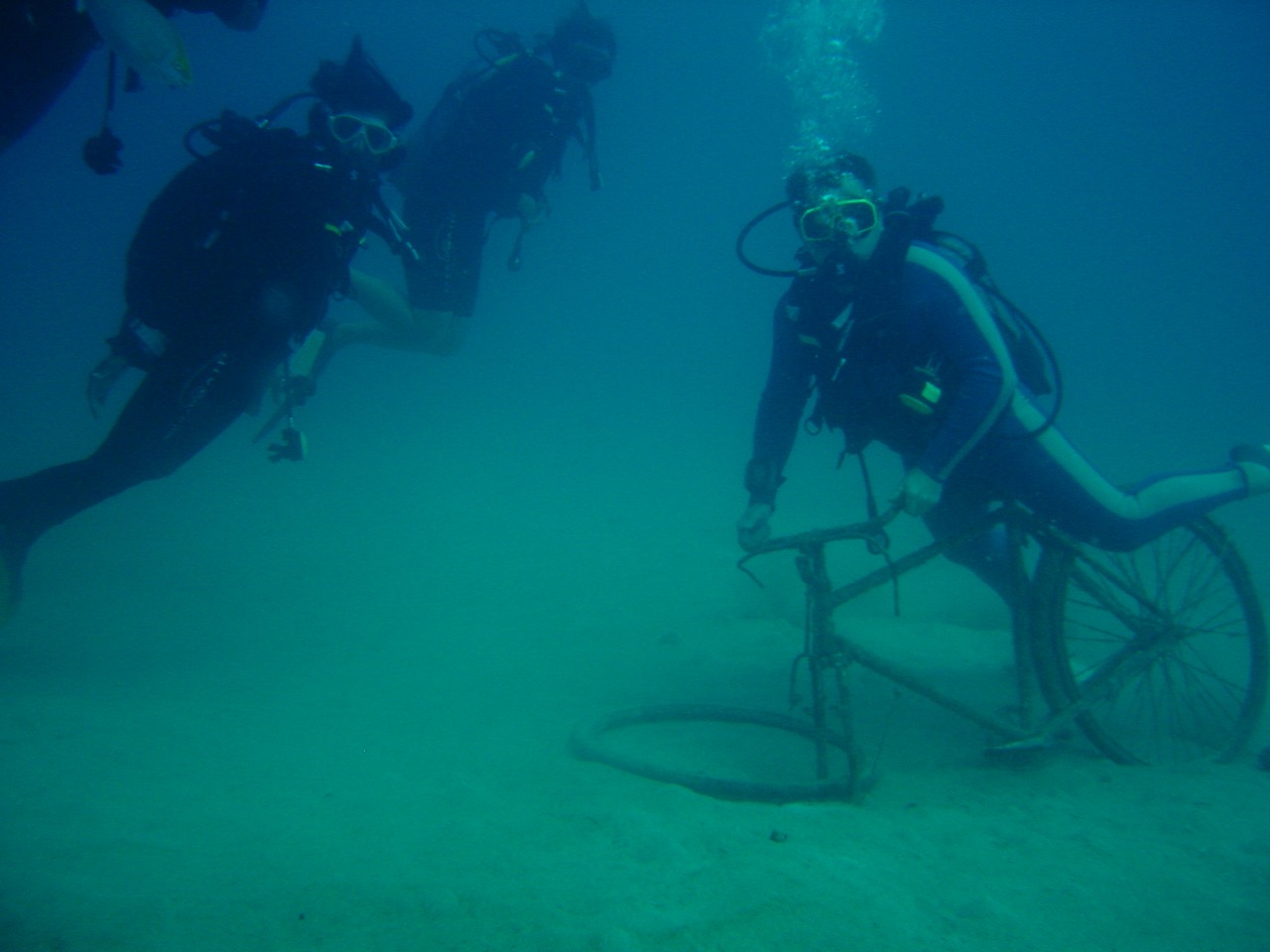 All the dives we did in Mauritius were really good, but most impressive for me was the dive at Shark pit. We were diving with sharks before, but never were we so close for such a long time. It is to day one of my best dives.

Couple of months later, as we were already at home, I saw a French documentary about Shark pit on tv. There were several divers and biologists there, diving, setting up under water cameras, and trying to understand why the sharks like that place so much. They couldn't really find the answer. And about two years later I saw again a documentary on tv (I admit, I am a tv junkie), again about sharks around Mauritius. As it turned out, after Shark pit was on tv, fishing boats came and caught and finned all the sharks and the Shark pit was empty. Biologists were able to find another place where sharks gathered near Mauritius, but didn't want to disclose the location - to prevent what happened to Shark pit from happening again. I was so sad, it seems to me such a waste to kill such a powerful and elegant animal just to take the fins.

I know sharks are not officially declared endangered like whales or sea turtles - which I would of course never eat. But I think they should be. Don't think that would impress Chinese, nor stop them, but would maybe stop the selling of Shark fin soup in the rest of the world. And in a long run, with more awareness, who knows... In the meantime, I believe that every one of us can contribute - or not - to the survival of sharks, however small the contribution. So the next time you are in Chinese restaurant, please choose some other delicious soup, not the Shark fin one.

P.S. It looks like the sharks are back at Shark pit, found couple of videos from last couple of years on Youtube, but with less sharks than we saw.
Posted by Heron at 1:01:00 PM 2 comments: