DRAFT - still working on this
Safety at sea is in theory very easy:
You have to keep the people inside of a boat and water outside of the boat.
As long you achieve this two simple objectives the rest are details.
There is another saying I heard in Croatia: "Čuvaj brod od kopna, a on če tebe od mora" This means: protect the boat from shore and she will protect you from the sea.

As usually the devil is in detail. To achieve this simple principles one have to develop a lot of active and passive tactics and actions and you still need a bit of luck.
Never forget to respect the sea.

In the next few entries I will try to write about some of the tactics or systems related to safety.
I will try to:
a) avoid bad weather in the first place
b) equip the boat to be able to survive the bad weather
c) have a backup plan in case the boat doe snot survive

a) To avoid bad weather:
- we will avoid periods and places with known bad weather like hurricane sessions, south oceans, North Atlantic in winter and similar
- we will listen to weather reports and have bought some equipment to enable us to get weather forecast while off shore. I will write about SSB radio and weather fax in a separate post.
- we will observe our surroundings - temperature, air pressure, clouds, rain fronts (on radar), wind changes, ... .

b) We are now buying a lot of equipment to be able to better survive bad weather. More about storm sail and a massive anchor later. Today I will write about Jordan series drogue.

c) Well, we have off shore life raft, EPIRB, hand held VHF, satellite phone and tons of equipment we hope we will never use and we are constantly developing our plans in case things go really wrong.

But today let us take a look Jordan series drogue.

In bad wether one can use active storm tactics: sailing with storm sails or passive tactics like heave-too.
In really bad weather after it is too rough to use active storm tactics or the crew is not capable of doing it any more and the waves are too high to safely heave-to on a modern sloop one can resort to other passive tactics like sea anchor or Jordan series drogue.
I personally do not like sea anchors. There are too many things that can go wrong with them. From collapsing or fouling the chute, blowing it out or breaking the rudder while moving backwards, ...
Jordan Series drogue (JSD from now on) is deployed from stern and not from the bow of a boat.
It is made of large number of small cones attached to a line with a weight at the end of a line and a bridle on the boat side.
As ther are many cones (in our case 132) the force distributed and applied gradually. This reduces the forces and the stress. Also as there are many cones they can not all foul  at the same time. But you better read it from the designer:
http://www.jordanseriesdrogue.com/ 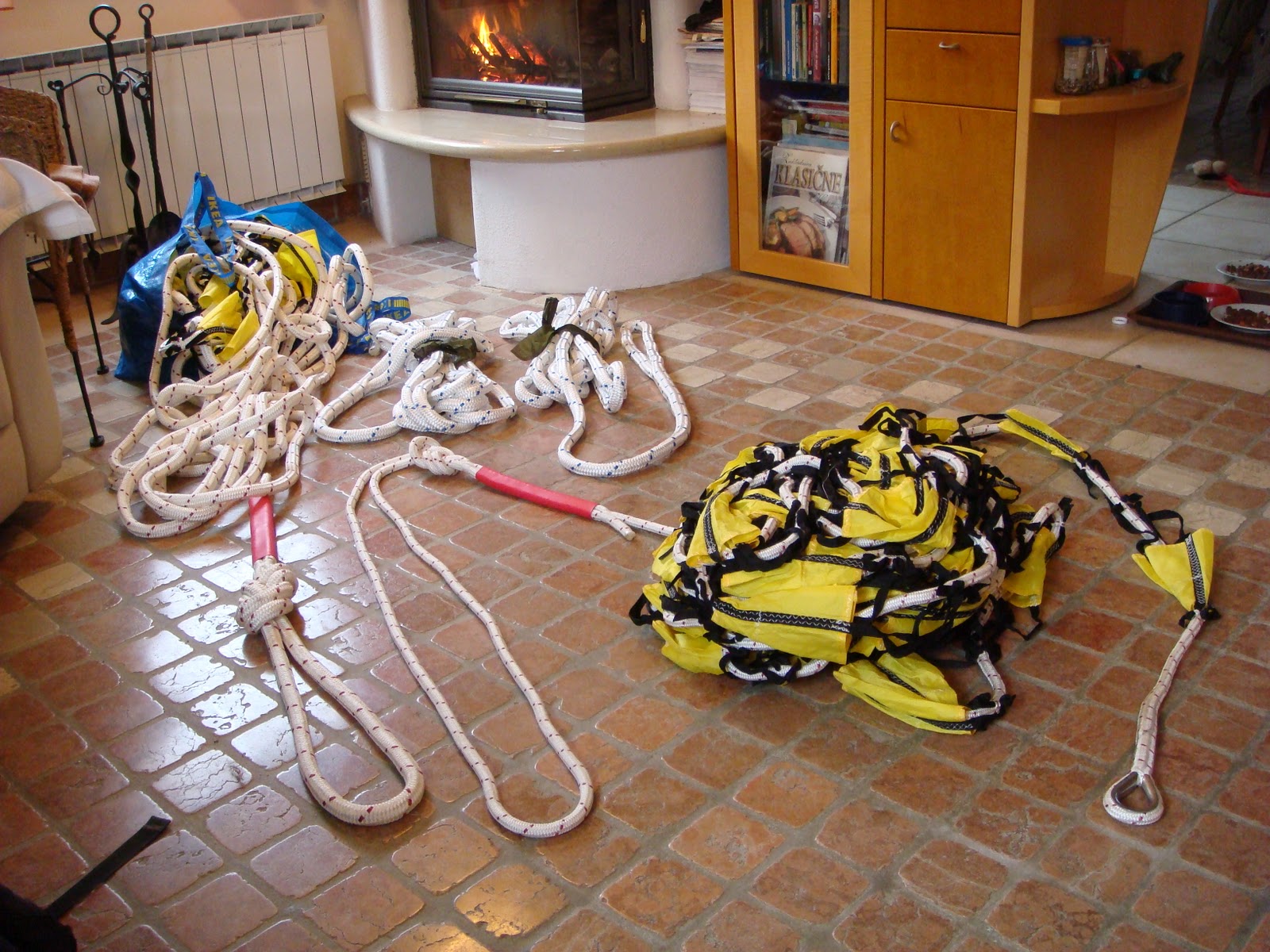 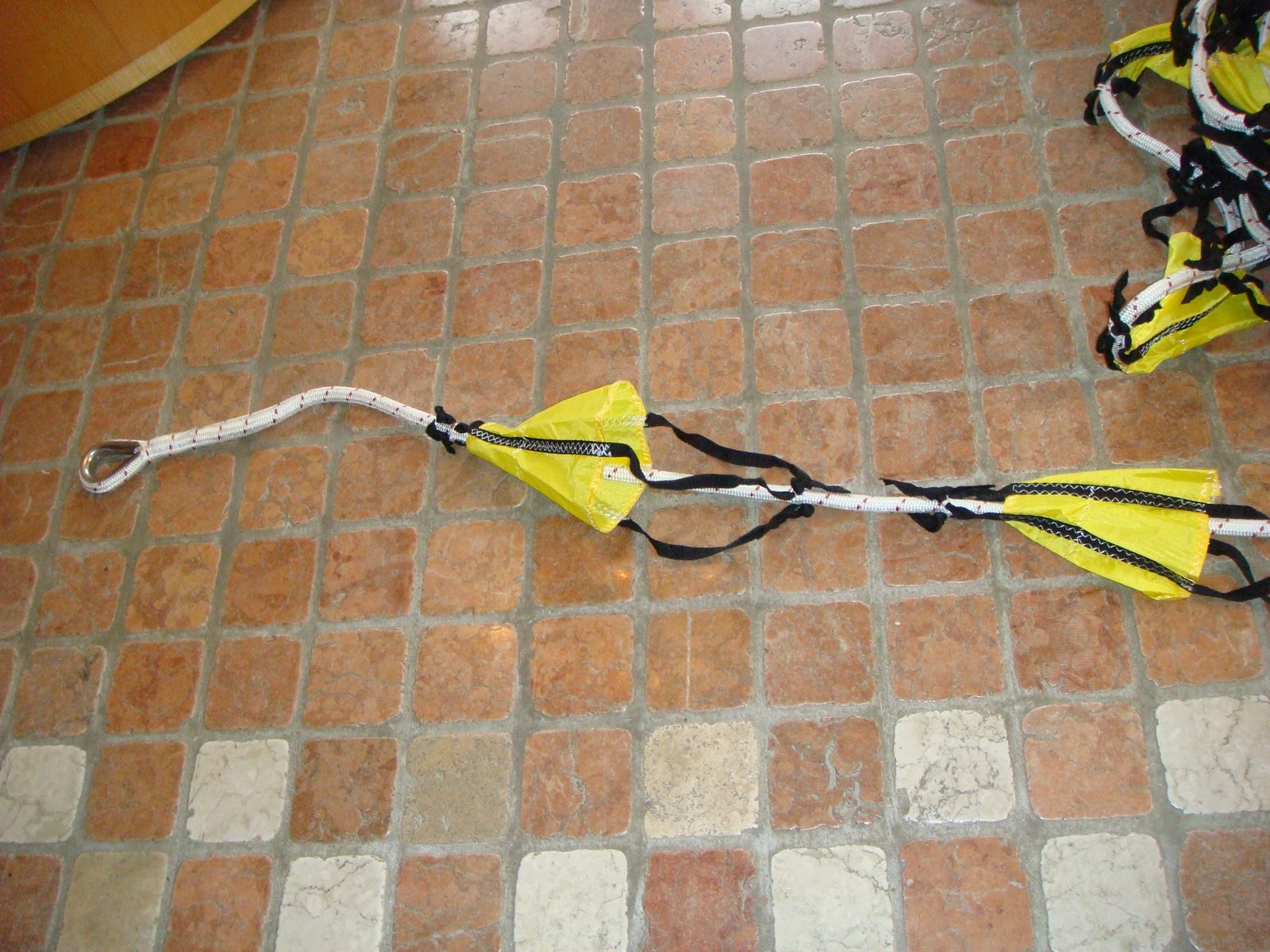 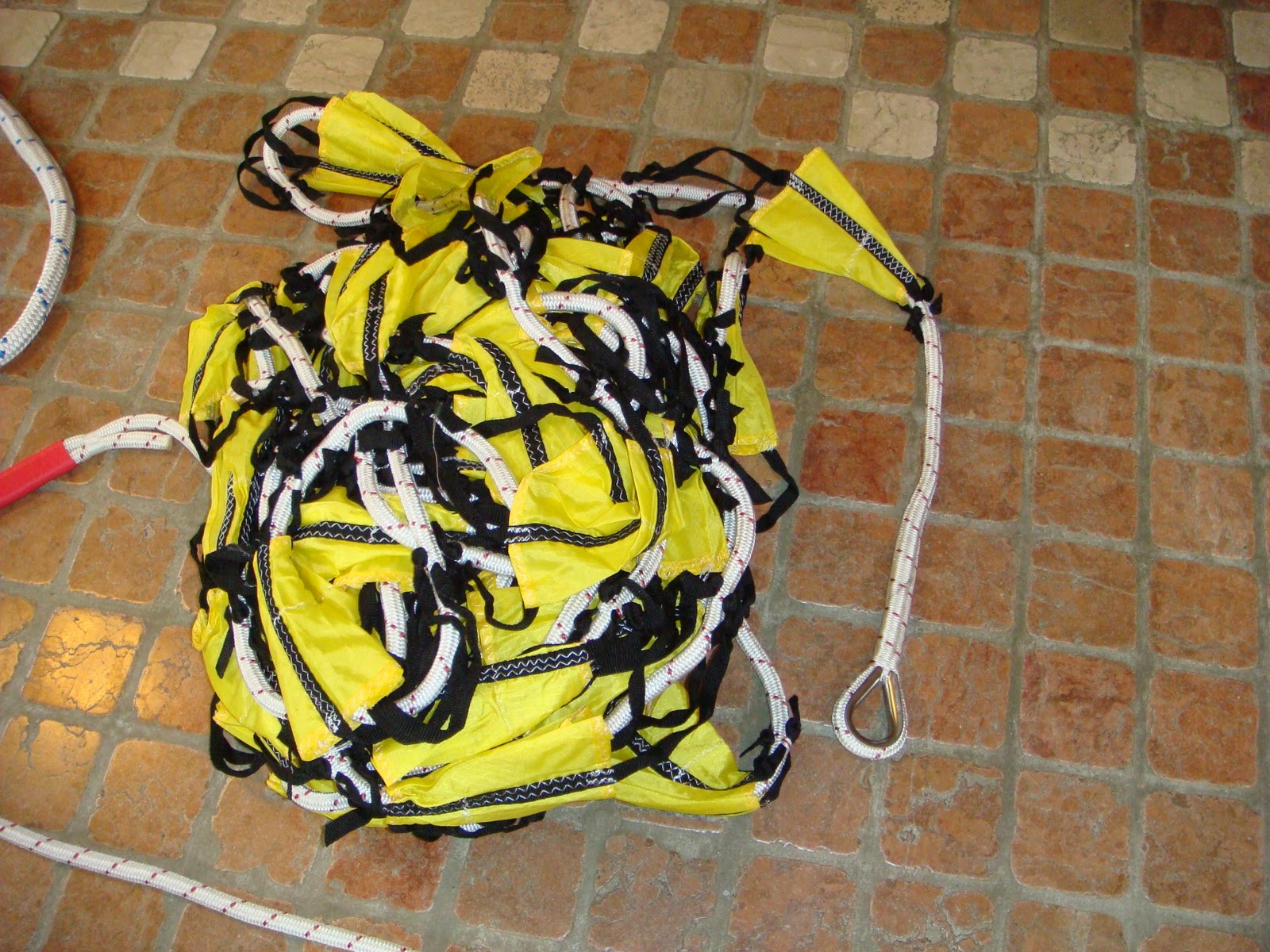 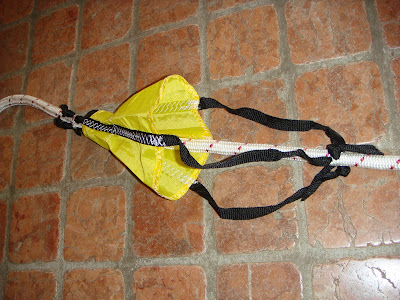 Unfortunately Jordan is no linger alive (he passed away in 2008, he was 92 years old) , but his work lives on.

We purchased the JSD from Neptune's Locker, a company in UK. It is a small company (maybe one man show): http://www.oceanbrake.com/
His price was best we could find and we like to purchase inside EU to avoid problems at delivery and customs issues.
I think he is more of a sailor and manufacturer then a seller - no flashy internet store. You order, you pay and you get the product. There is no status or order on-line tracking system. He did not even inform us about actual shipment. The package just arrived.
And it was heavy. This boat stuff looks so big when you bring it into the house.
The line is substantial - heavier then my mooring lines. I found the line a bit soft and not very tightly woven, but this is probably OK for the purpose.
Posted by Heron at 1:03:00 AM No comments: