This past week we spent in Medulin bay, tucked in front of Pomer marina. The weather was not so very bad till Friday, it mainly rained during the night and we still had some sun during the day, so we rowed ashore often and even took a dip in the sea, more for hygiene purposes than for swimming. Then the rain and wind intensified, it got colder and grey and depressive. We hoped to be moving up along Istrian West coast a bit already today, but it doesn't look too good. Rain just stopped and wind is still whistling around the shrouds and it doesn't look like things are calming down as forecast. So we'll probably spend another night here.
Here are some photos of the past days. This is the bay on Unije, where we slept last Saturday. Even then the water was not very warm any more, so I didn't go snorkelling. 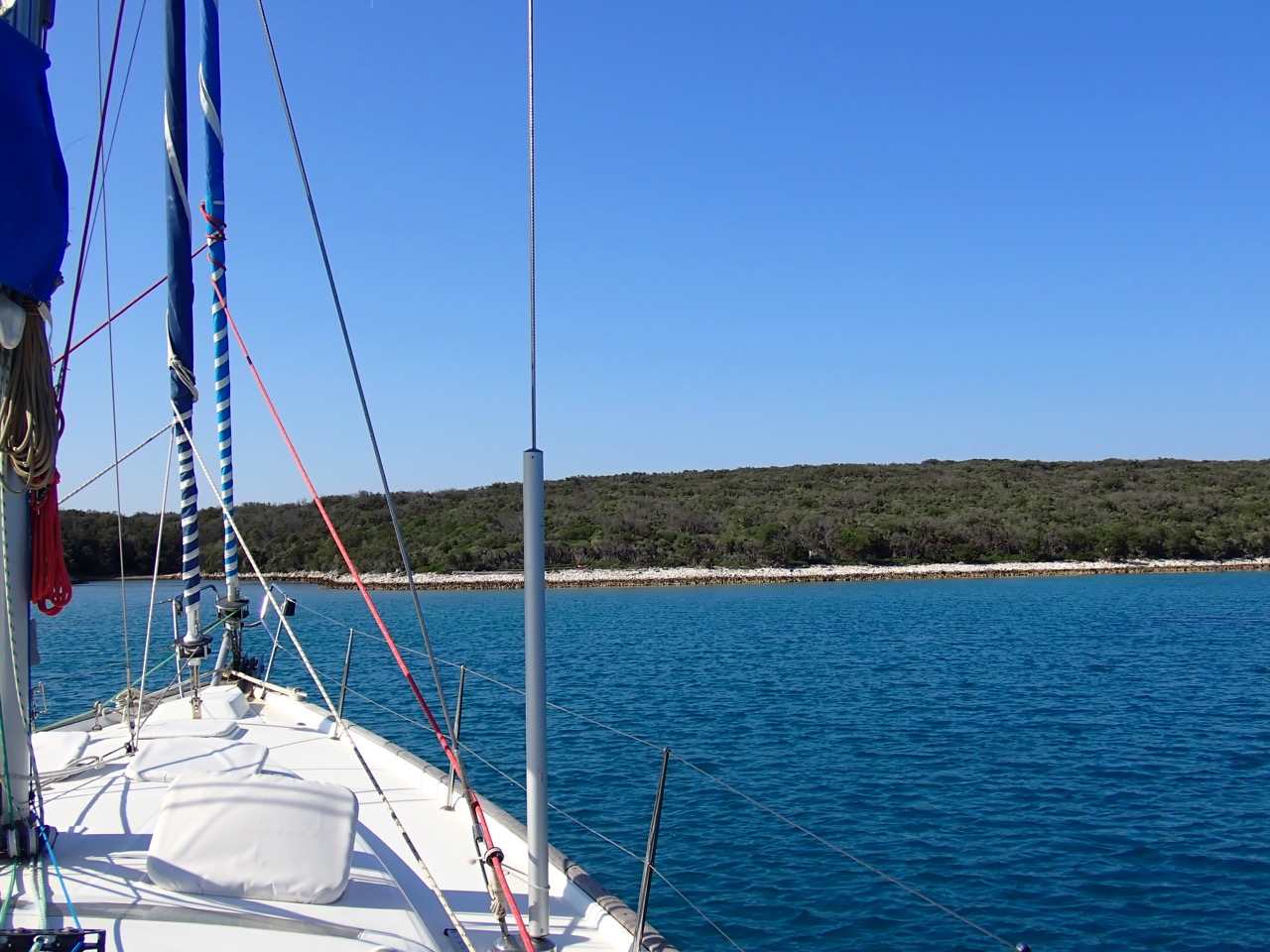 And this is a lighthouse in Kvarner. Bay of Kvarner used to have a bad reputation amongst the sailors, it is quite large and the burja, the NE wind really blows fiercely here and also whips up quite a sea, that can easily make people sea sick. But in calm weather it's just not even a long stretch of sailing, or motoring. 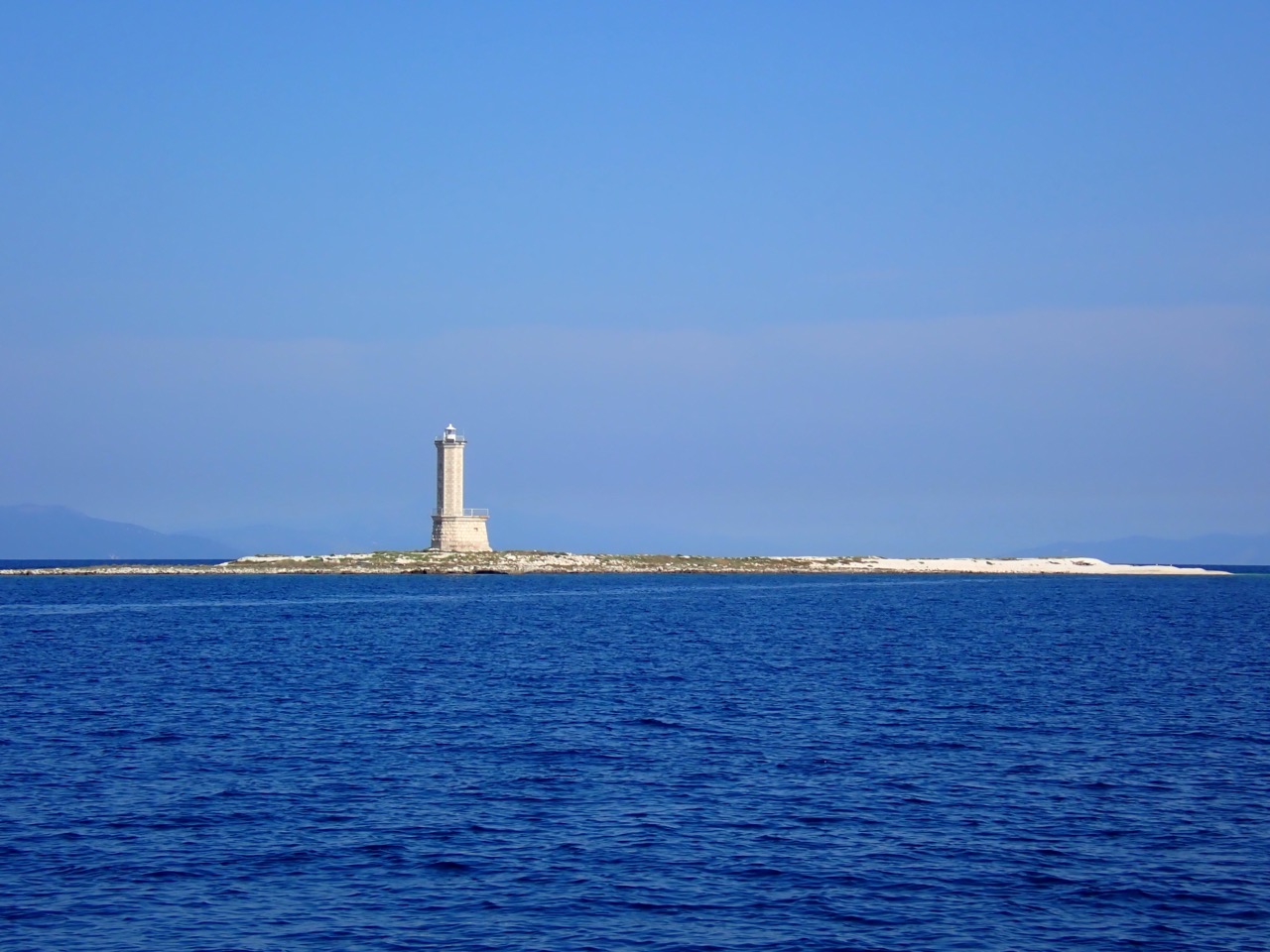 The area around Medulin really looks more like mainland,.. 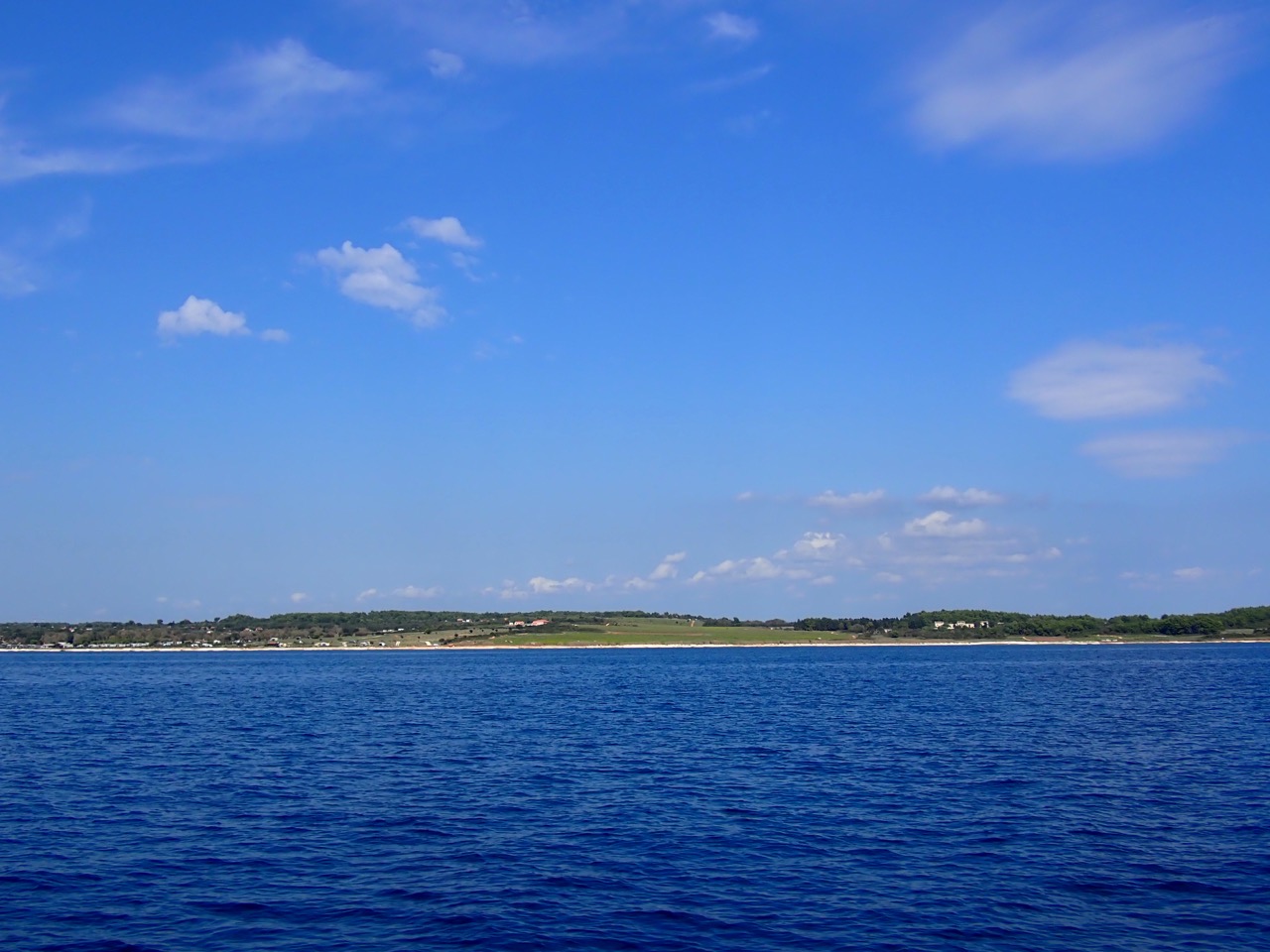 ...there were even cows grazing near the shore. 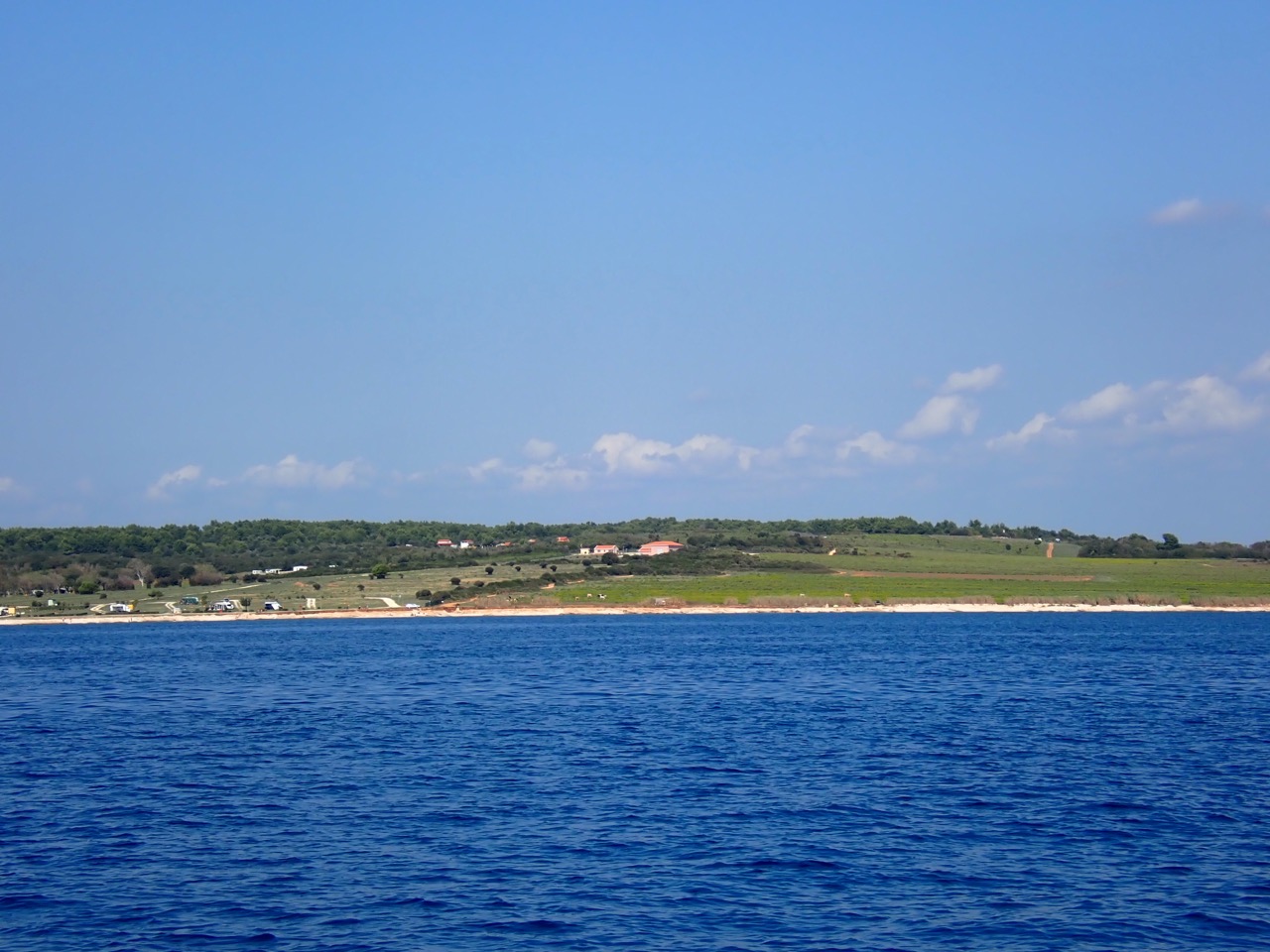 First night, while it was still calm, we anchored more at the entrance to Medulin bay, where the water was clearer. But then on Monday we moved inside the bay in front of Pomer marina and the camping ground. Both have free internet, yay! 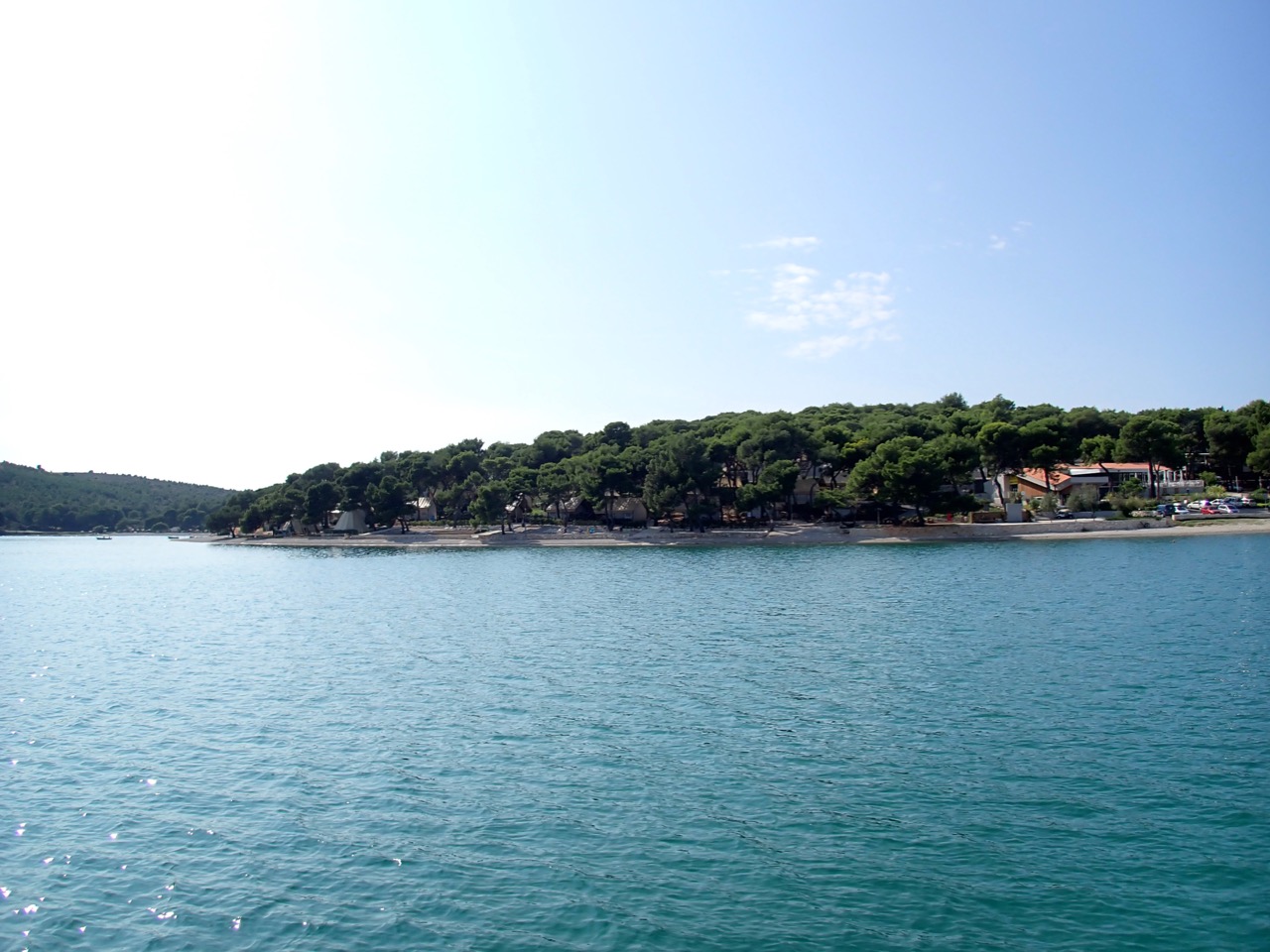 On one of the days we made a trip around the bay with the dinghy. First we checked the shallow lagoon to the West. 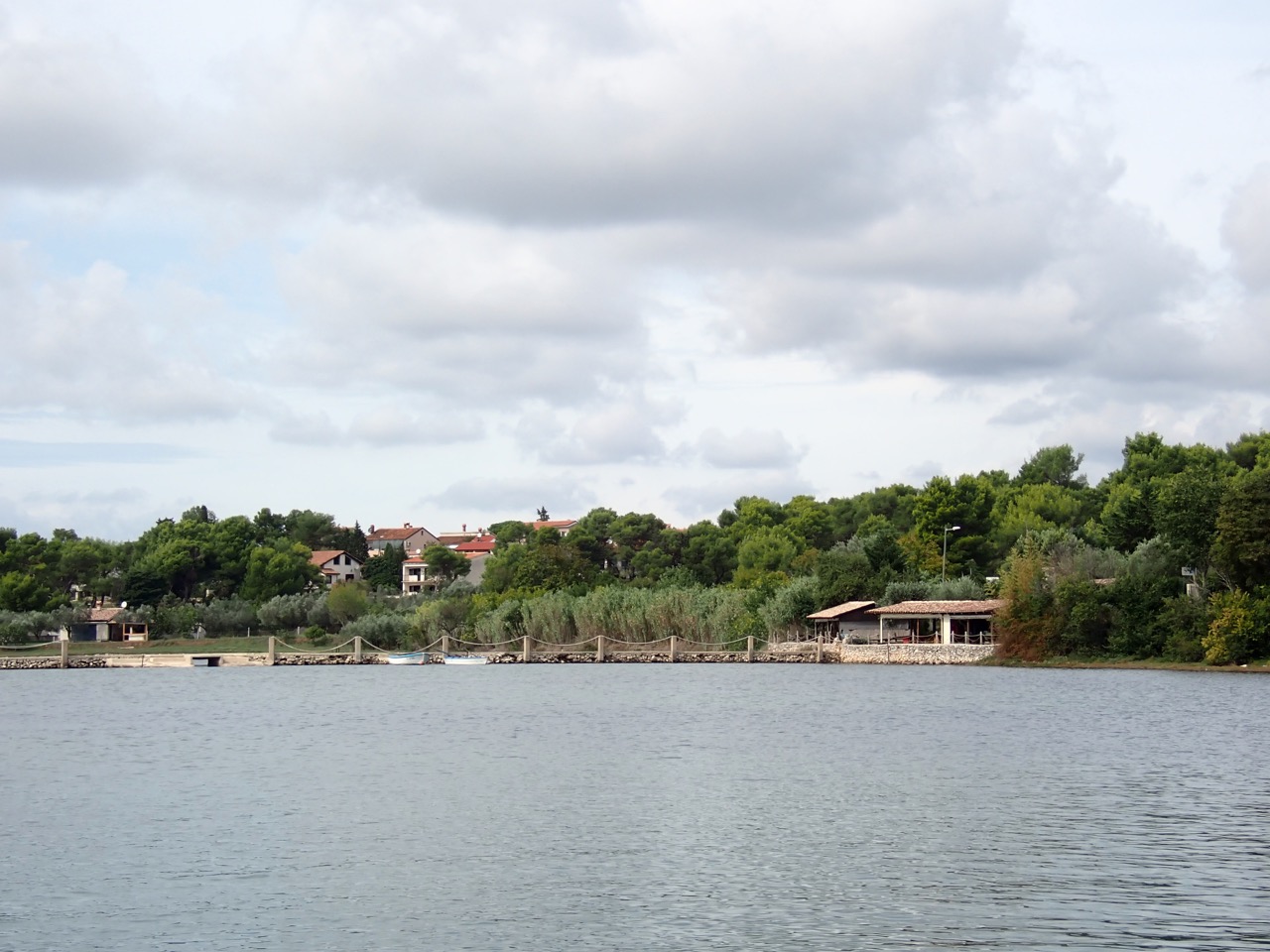 There is a concrete pathway across it, with several small bridges to allow for the movement of the water. We heard that lots of baby fish grow up here and that there are also lots of birds around. We only saw one white egret. 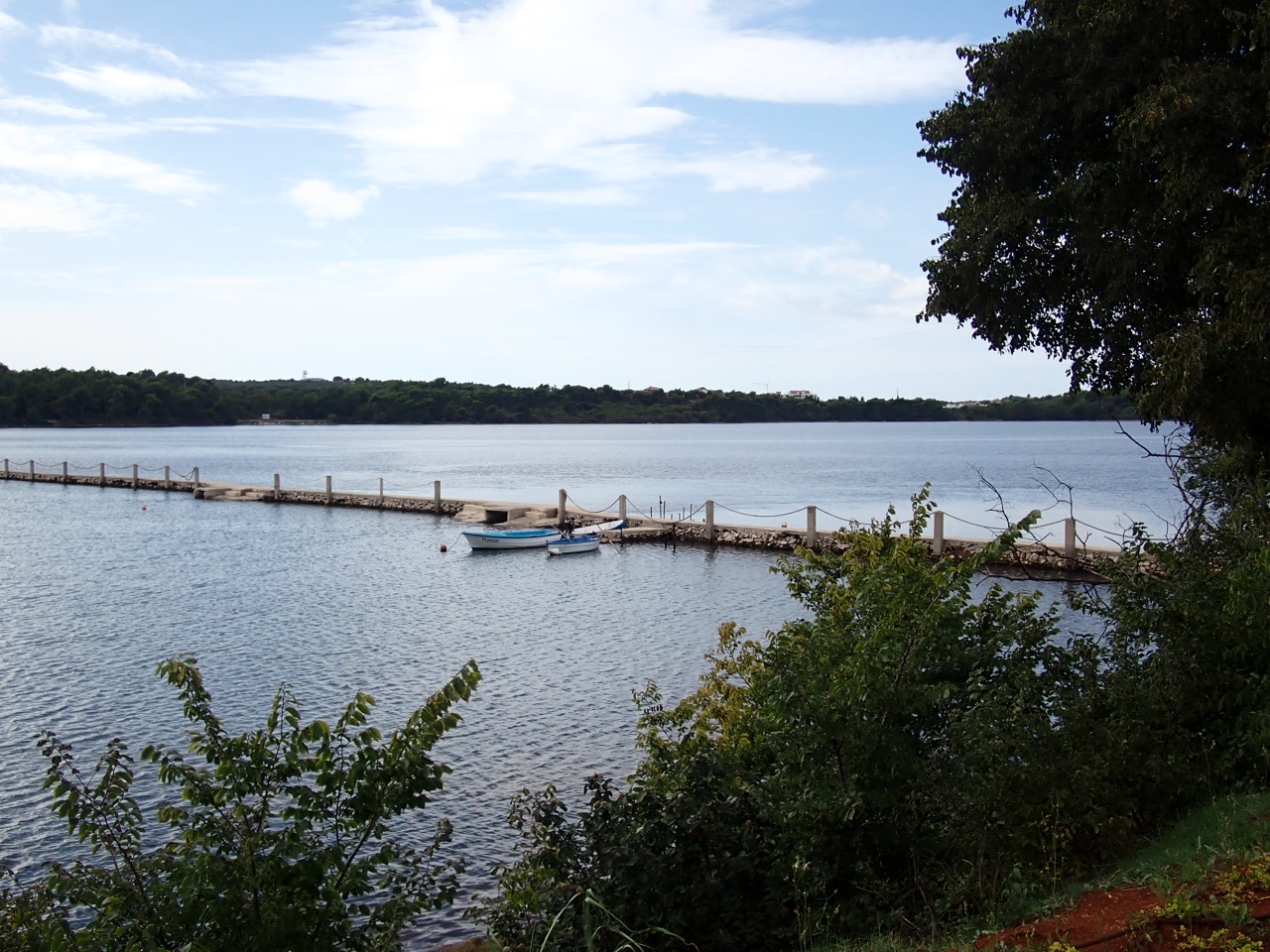 We checked the camp site on foot. It is actually "glamping", which means glamorous camping. But you could hardly call these small houses tents, although the walls are made of fabric. They have baths, TVs and even air conditioning in them. What I liked the most was neat surroundings, especially huge amounts of rosemary around the houses... 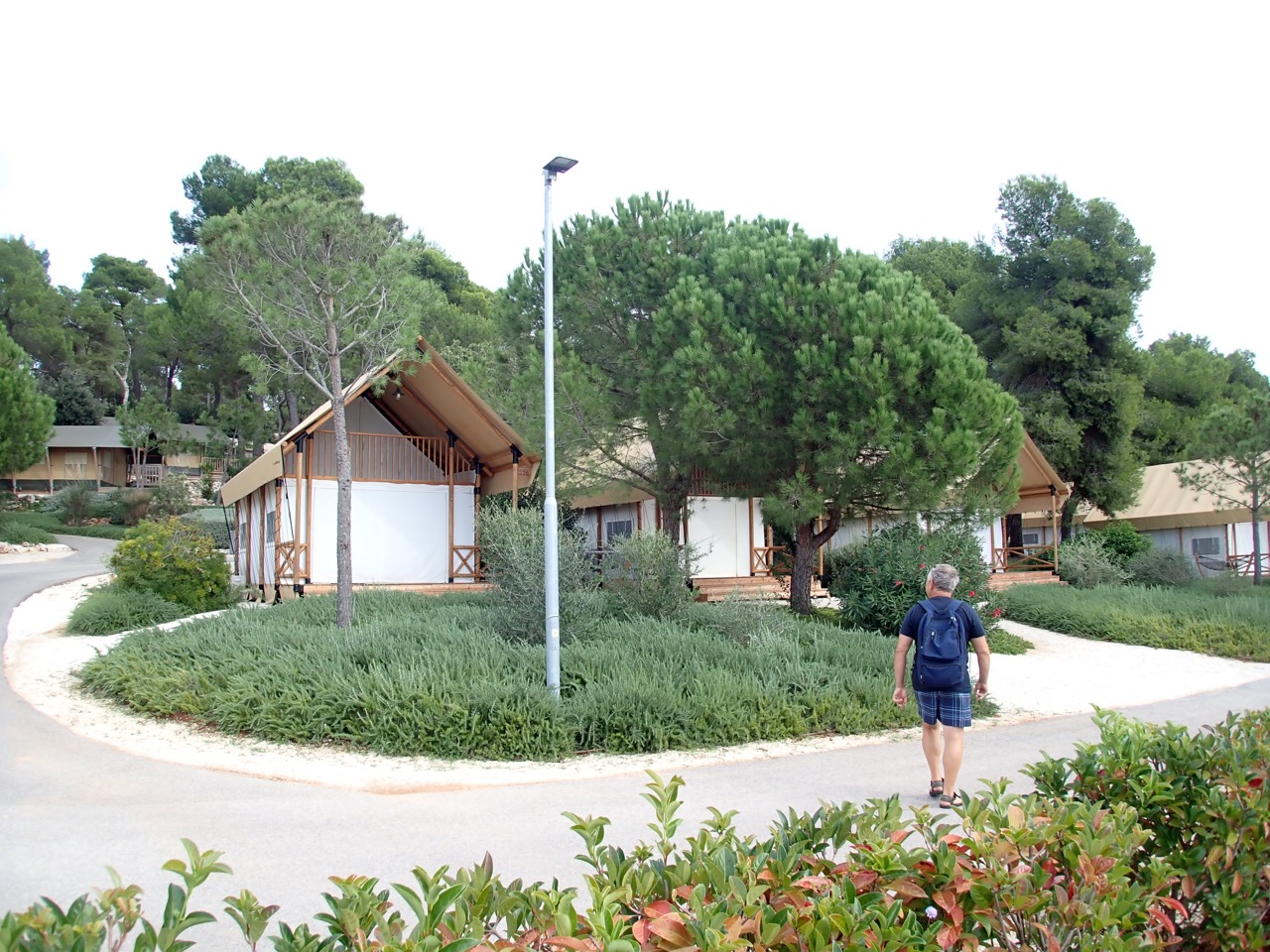 ...and some still flowering plants that the bees loved. 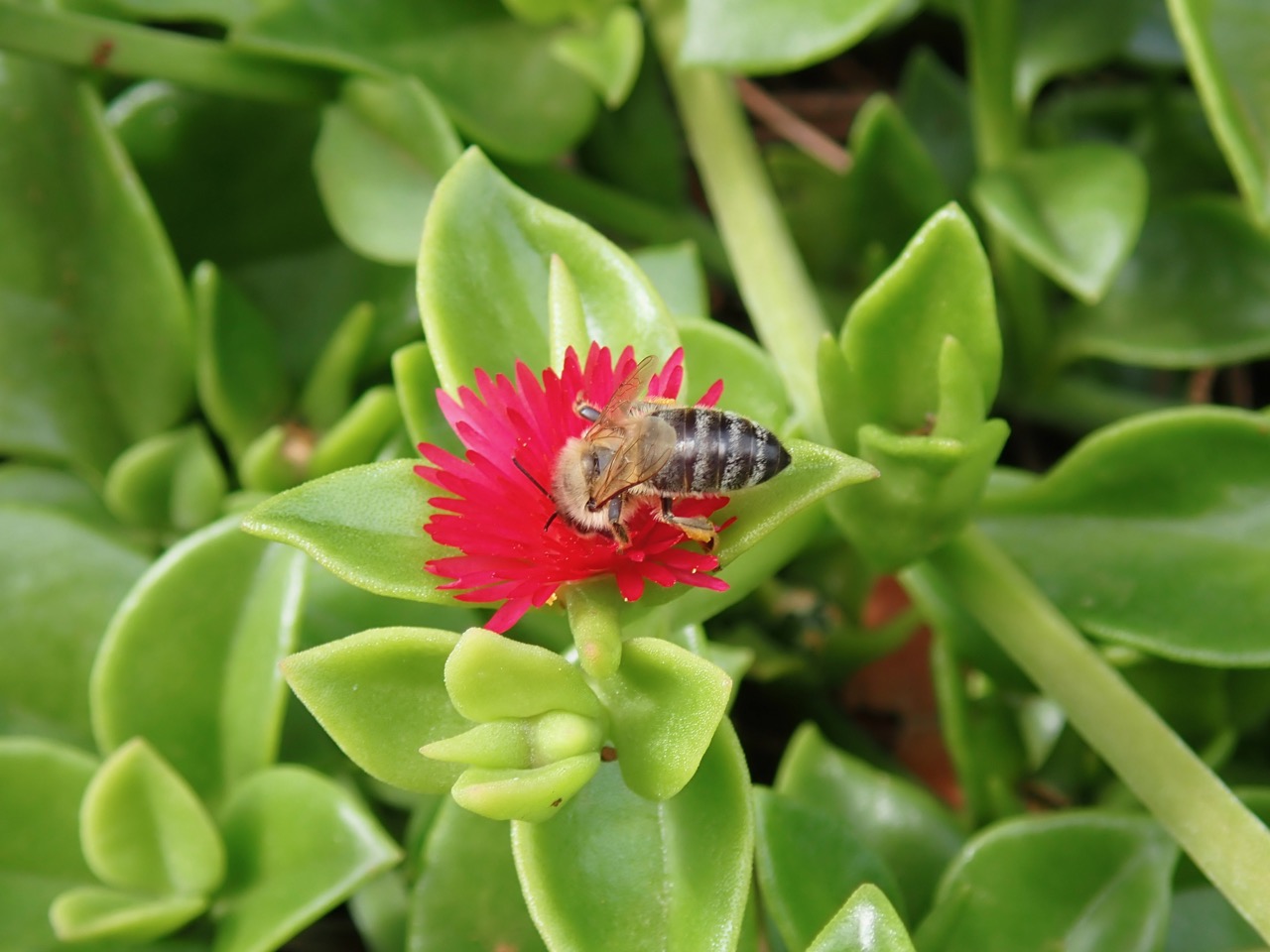 This is the marina, to the left is the camp site and to the right are Heron and our neighbours, an American cat. 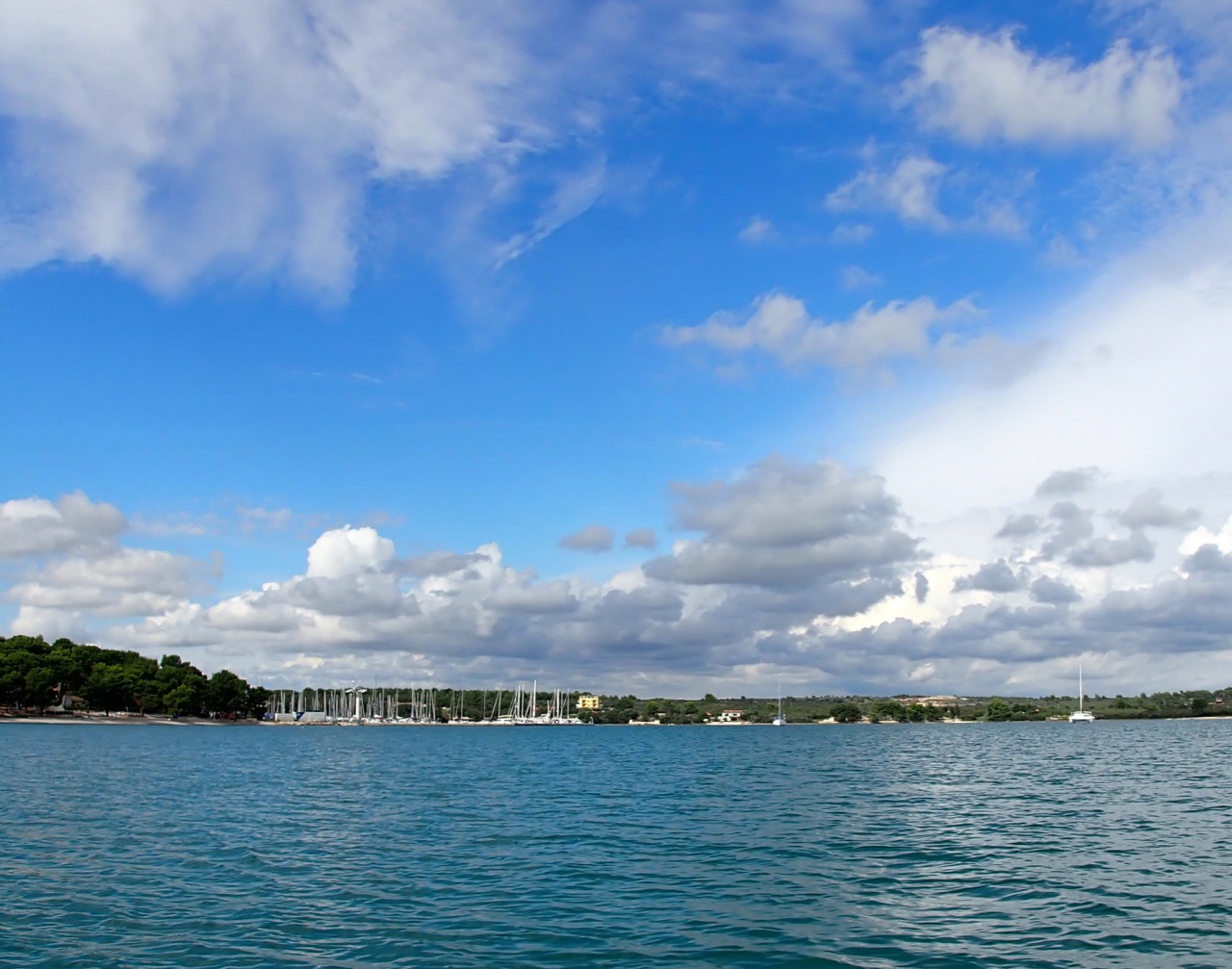 Next we dinghied across the bay. I couldn't resist the photo of the clouds. 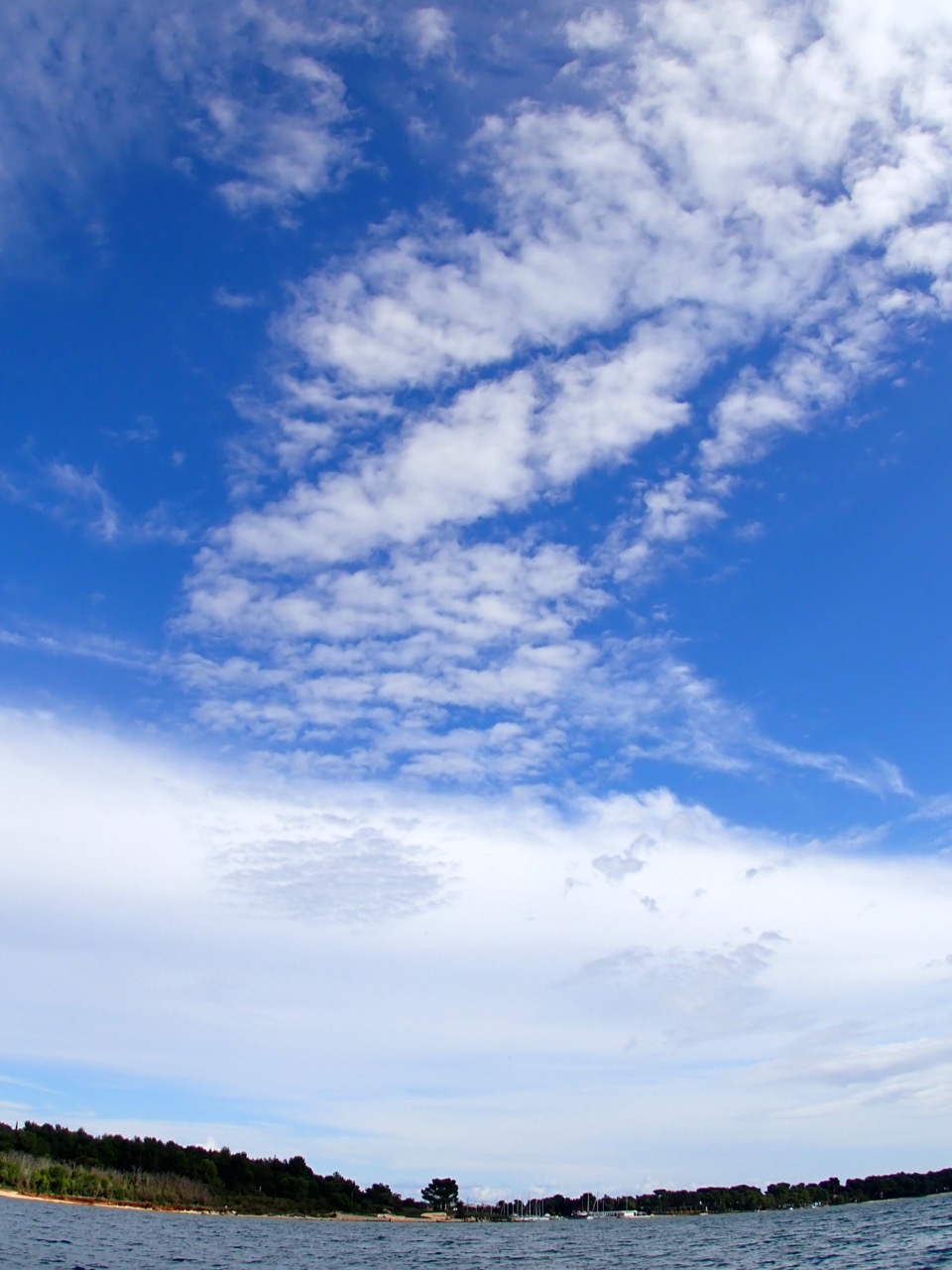 The Mediterranean shag or vranjek was not very pleased, that we came by so close. 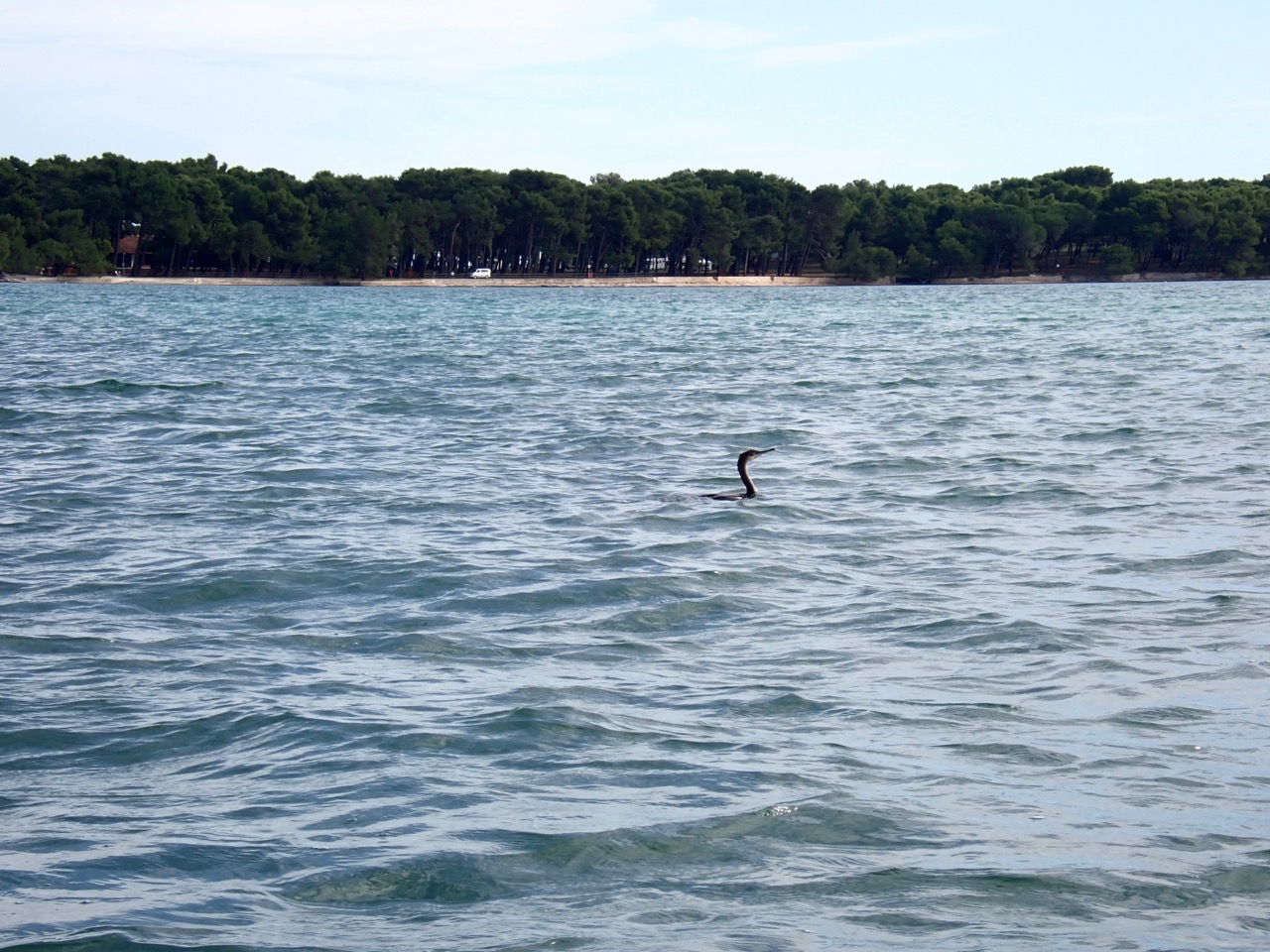 We visited a site of the old Roman villa that was built during 1st to 4th century. The walls are recreated and the mosaics and more valuable finds moved into museums, but it's a nice walk through the pine woods and one can get pretty good picture, how thing used to be. 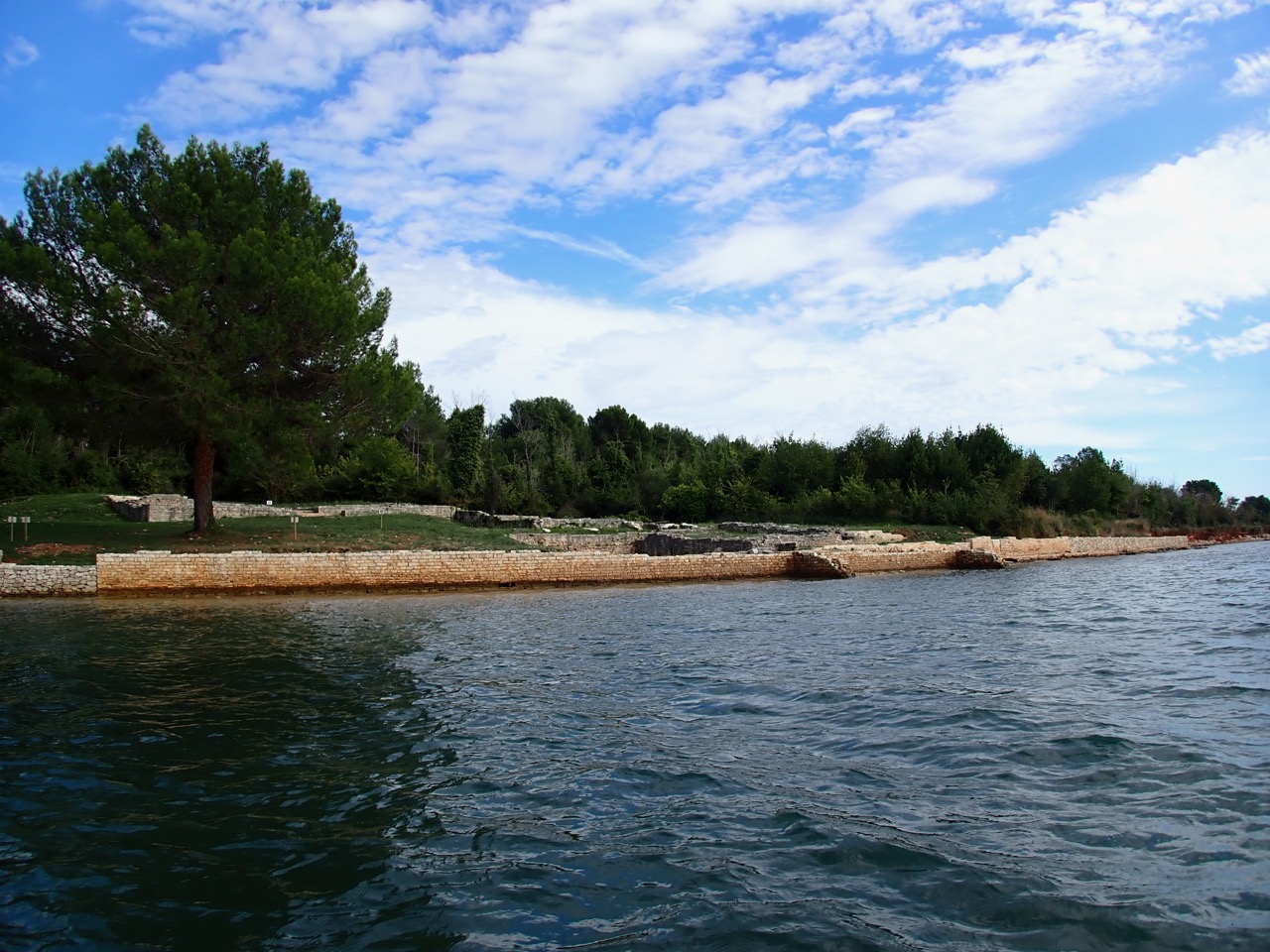 We left the dinghy in Uvala Burle. 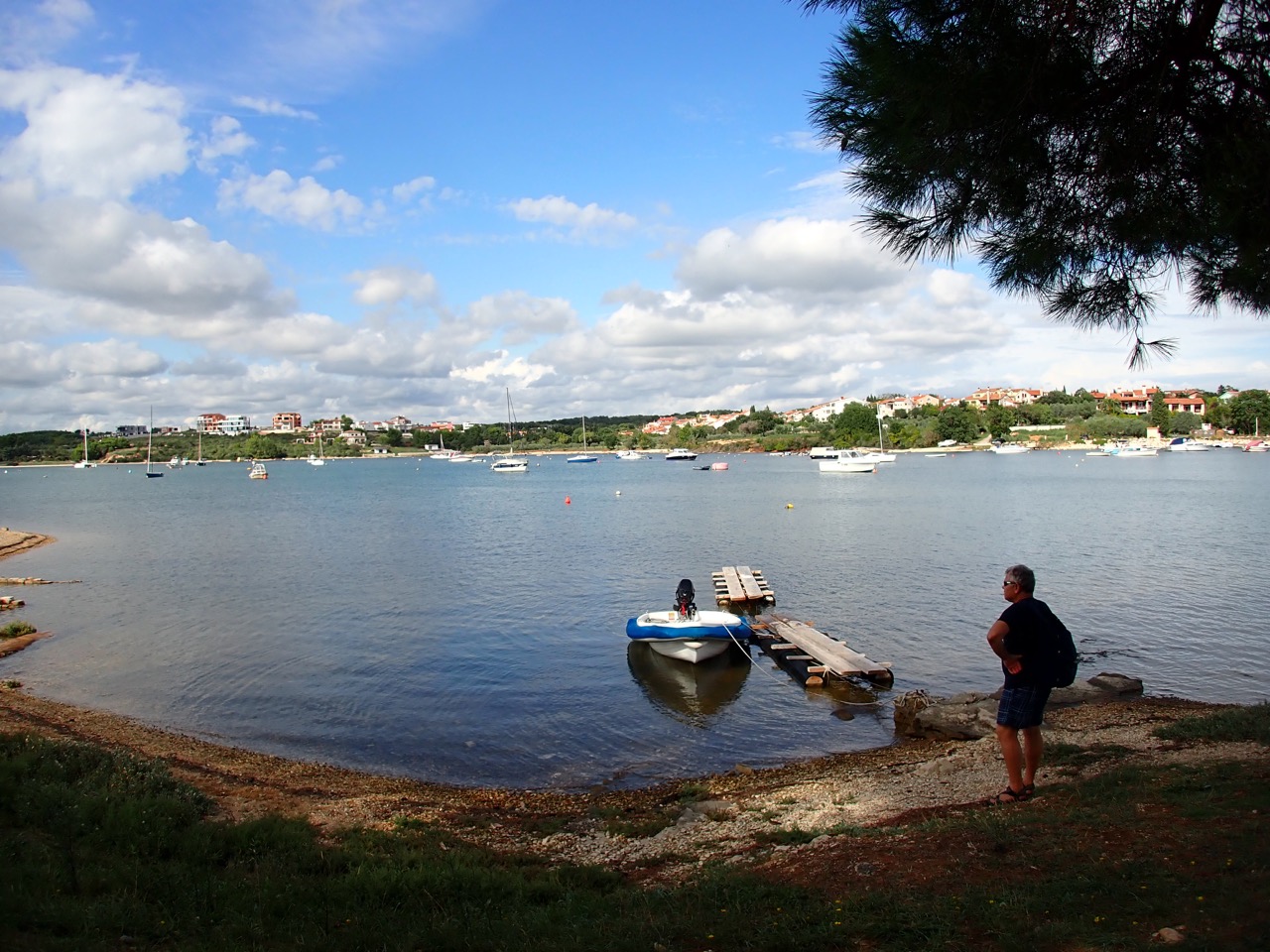 The Roman buildings were built almost around whole peninsula, it is hard to imagine it all belonged to one villa. 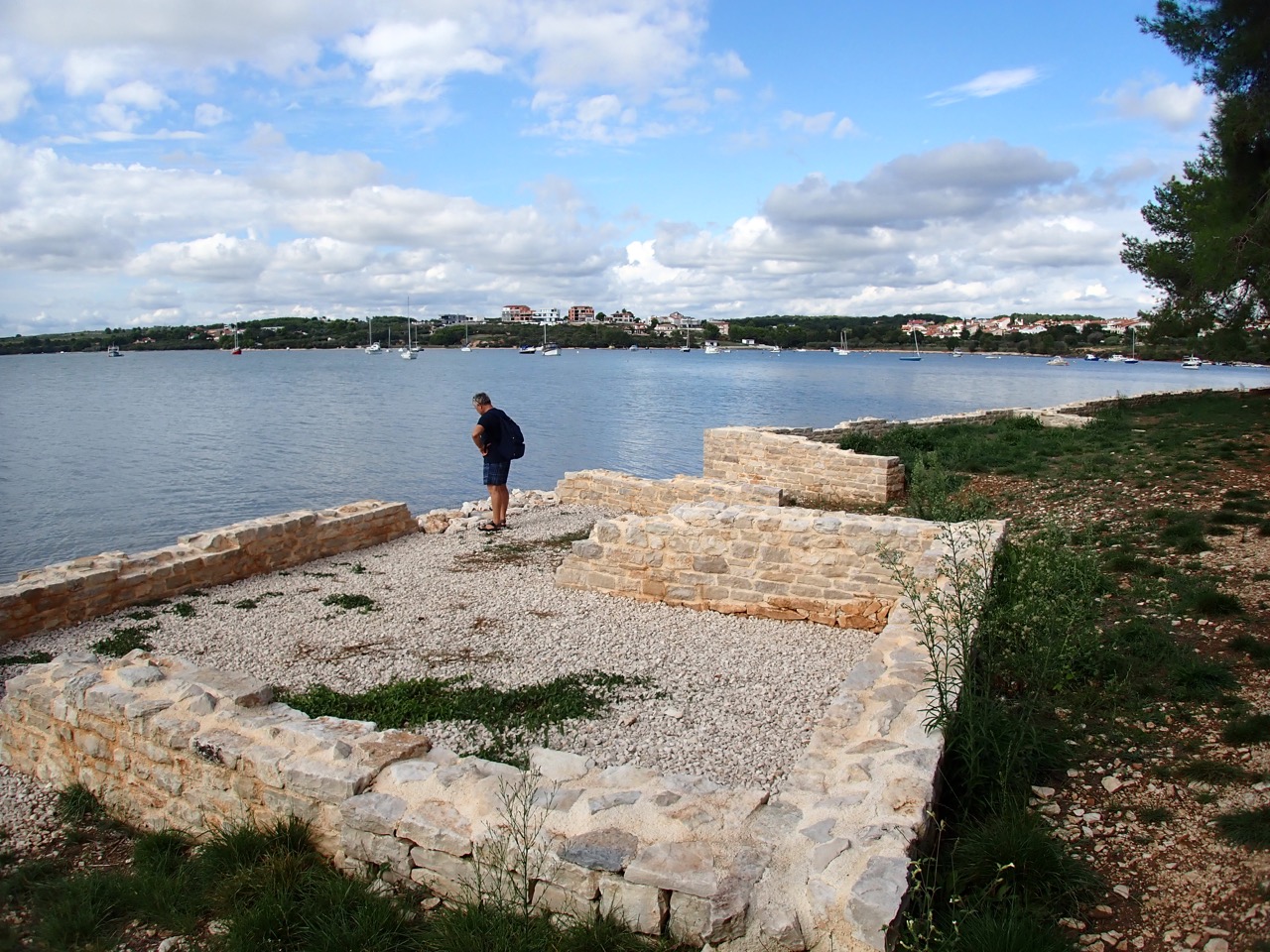 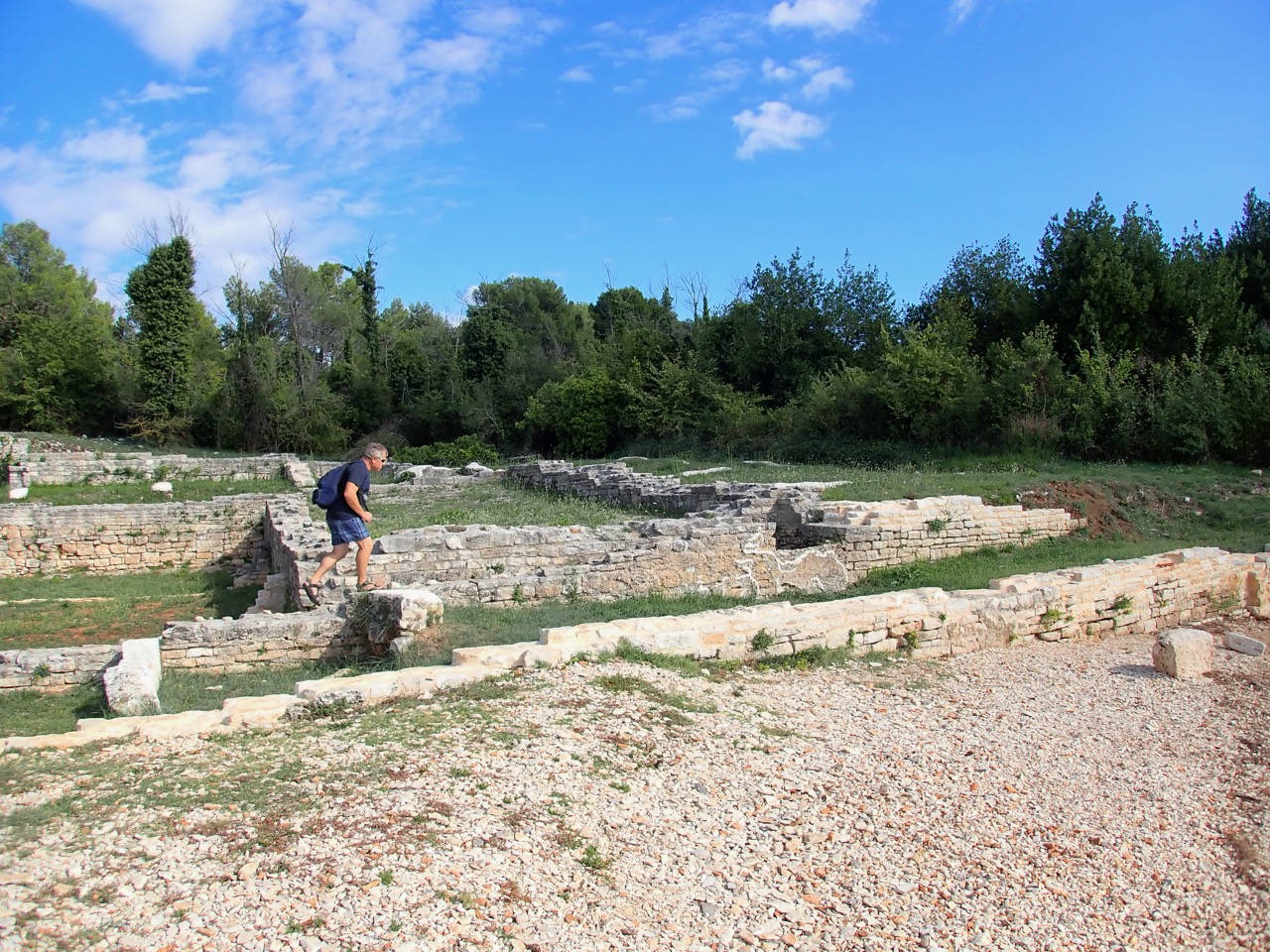 There are still lots of original old stones in the sea, the sea level at that time was lower than it is now. 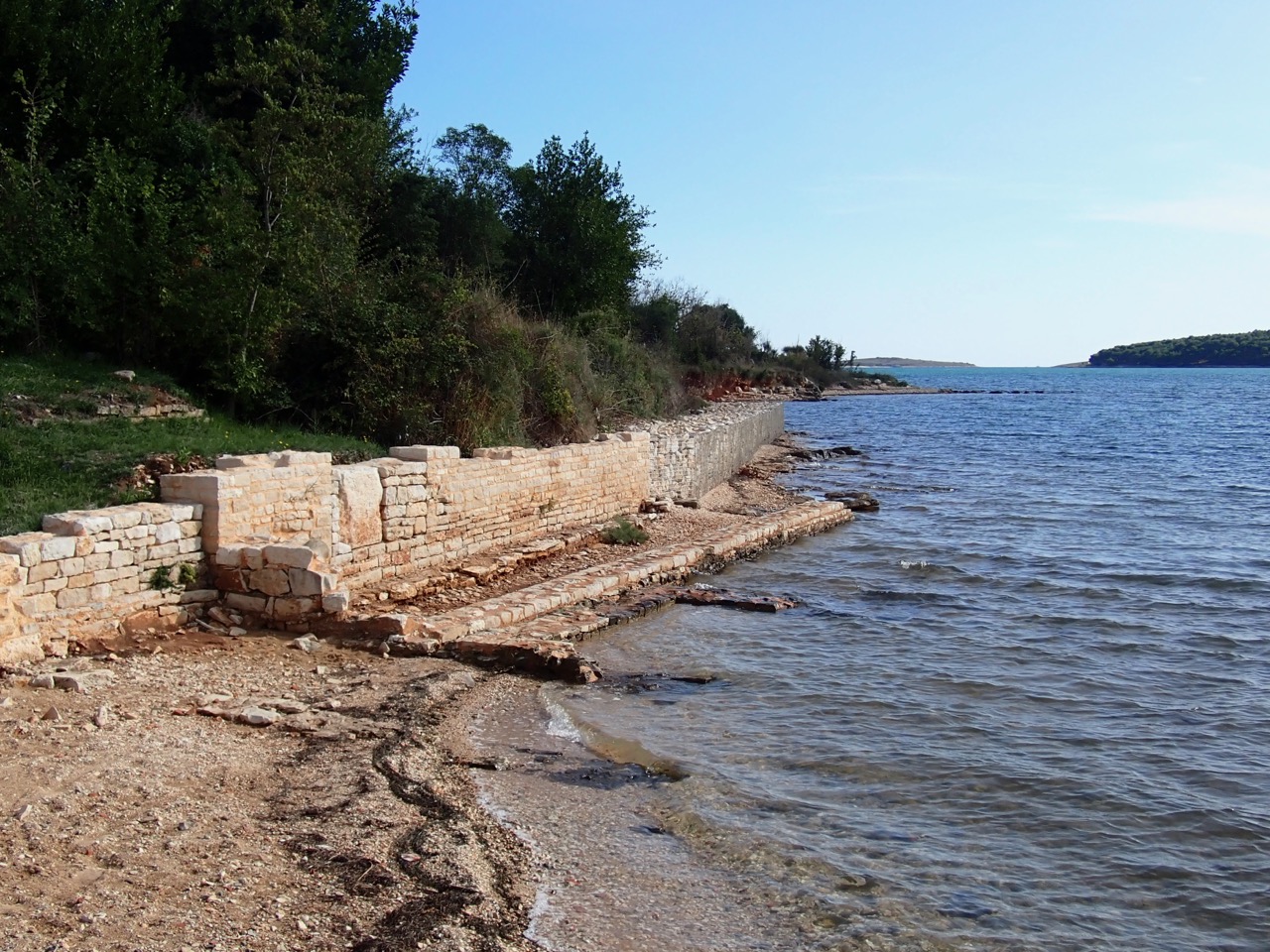 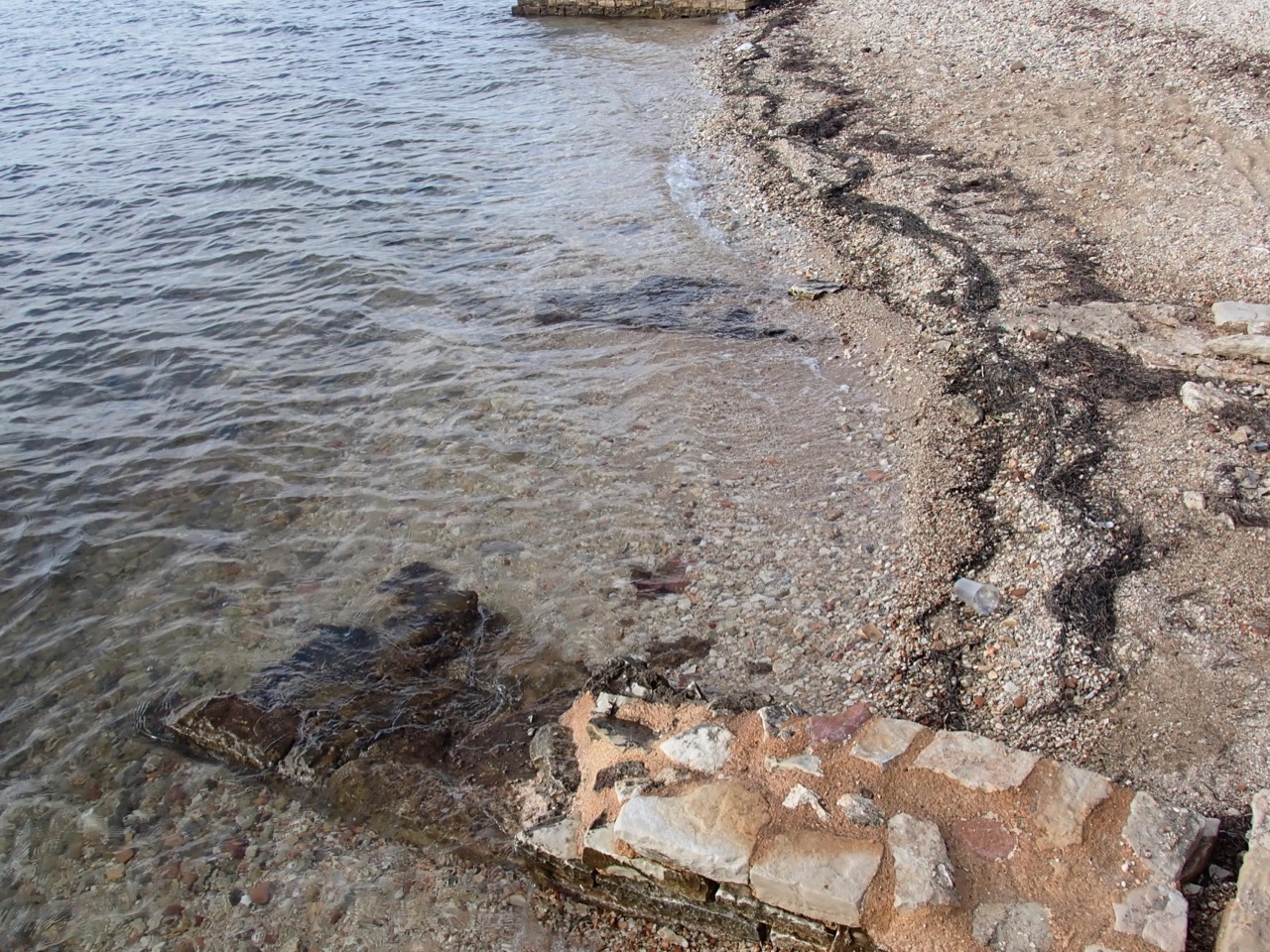 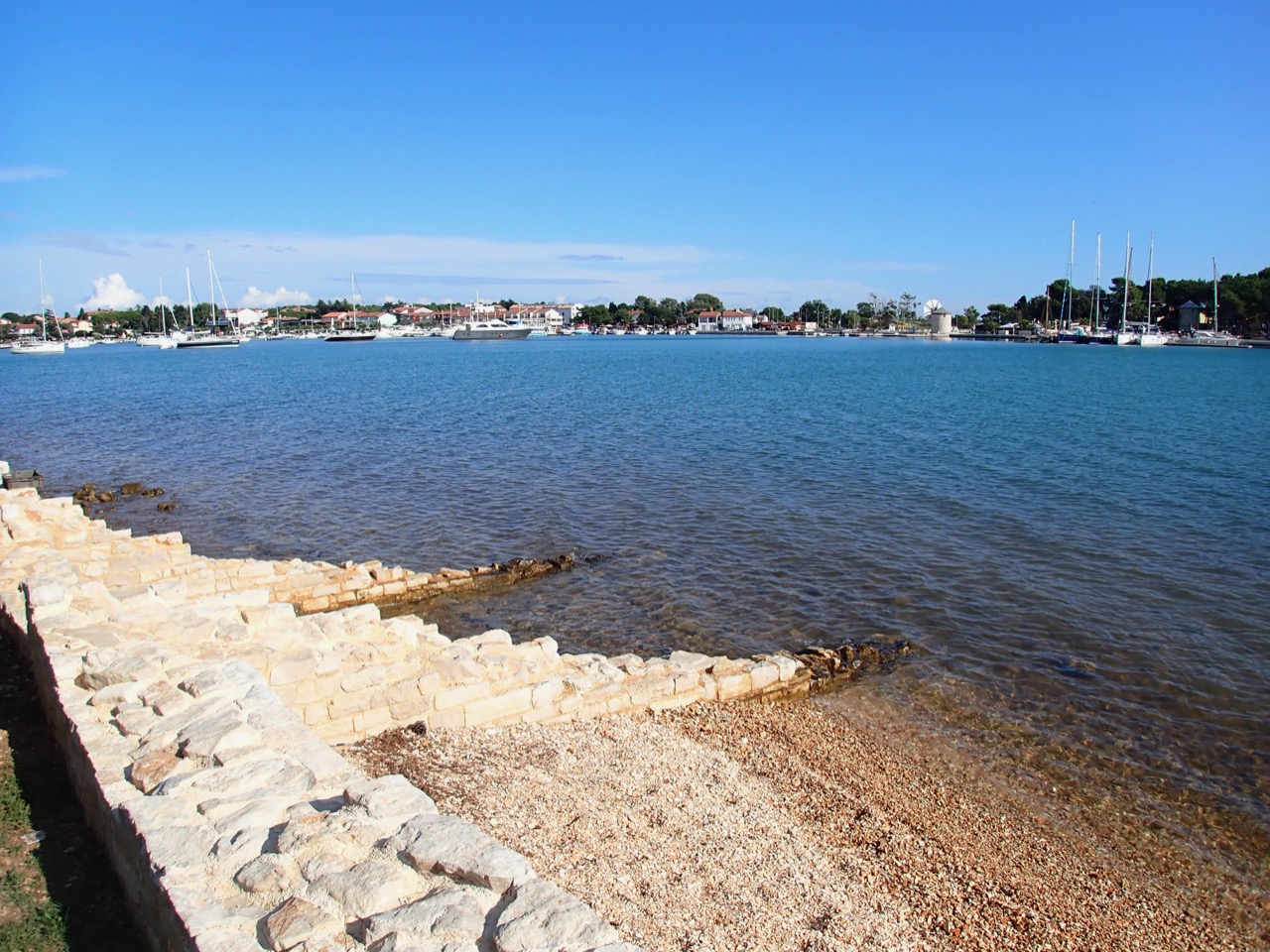 and this is the marina in Medulin with windmill. 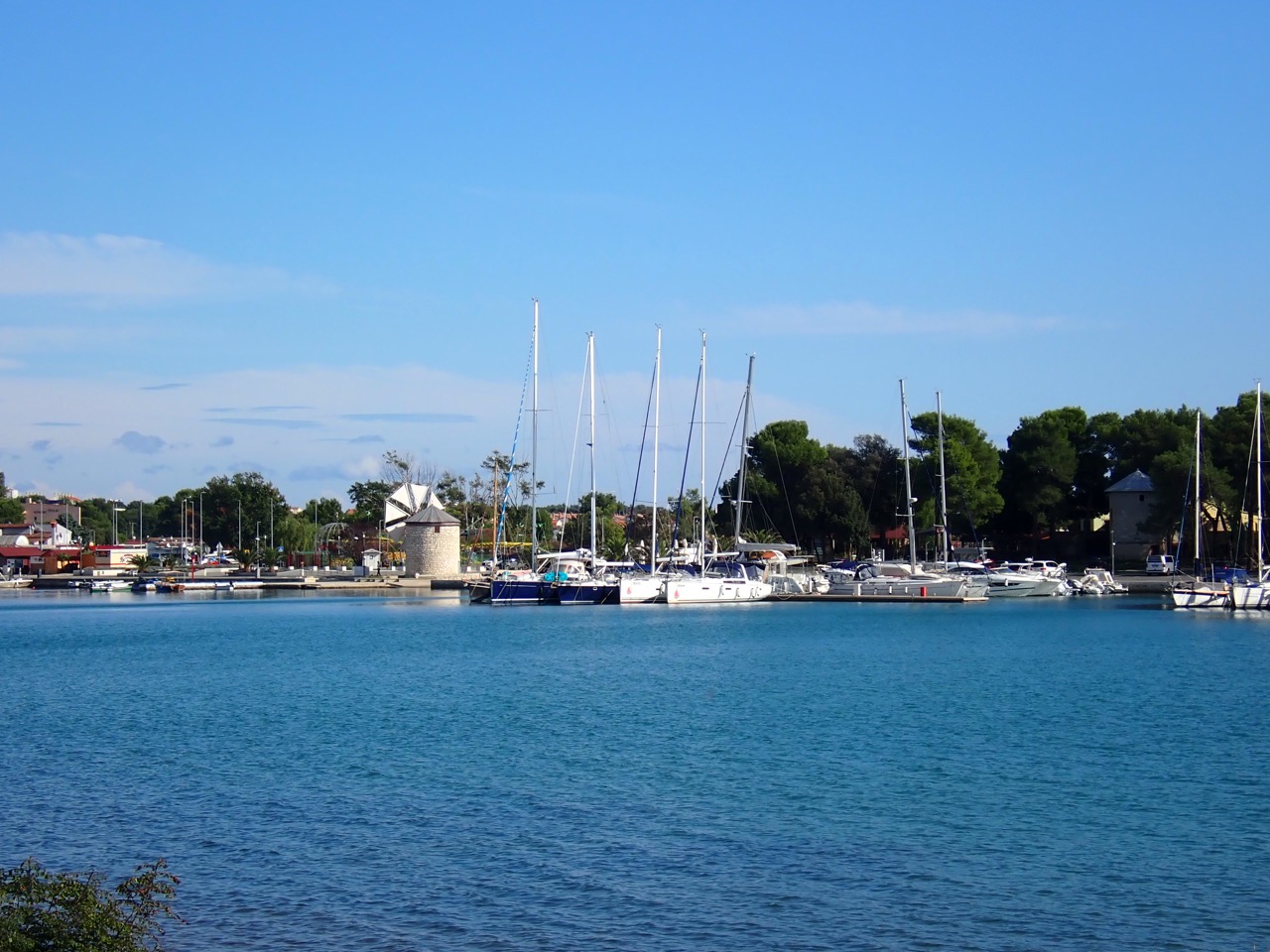 I don't think this was built by old Romans, but it looks very much in their style. 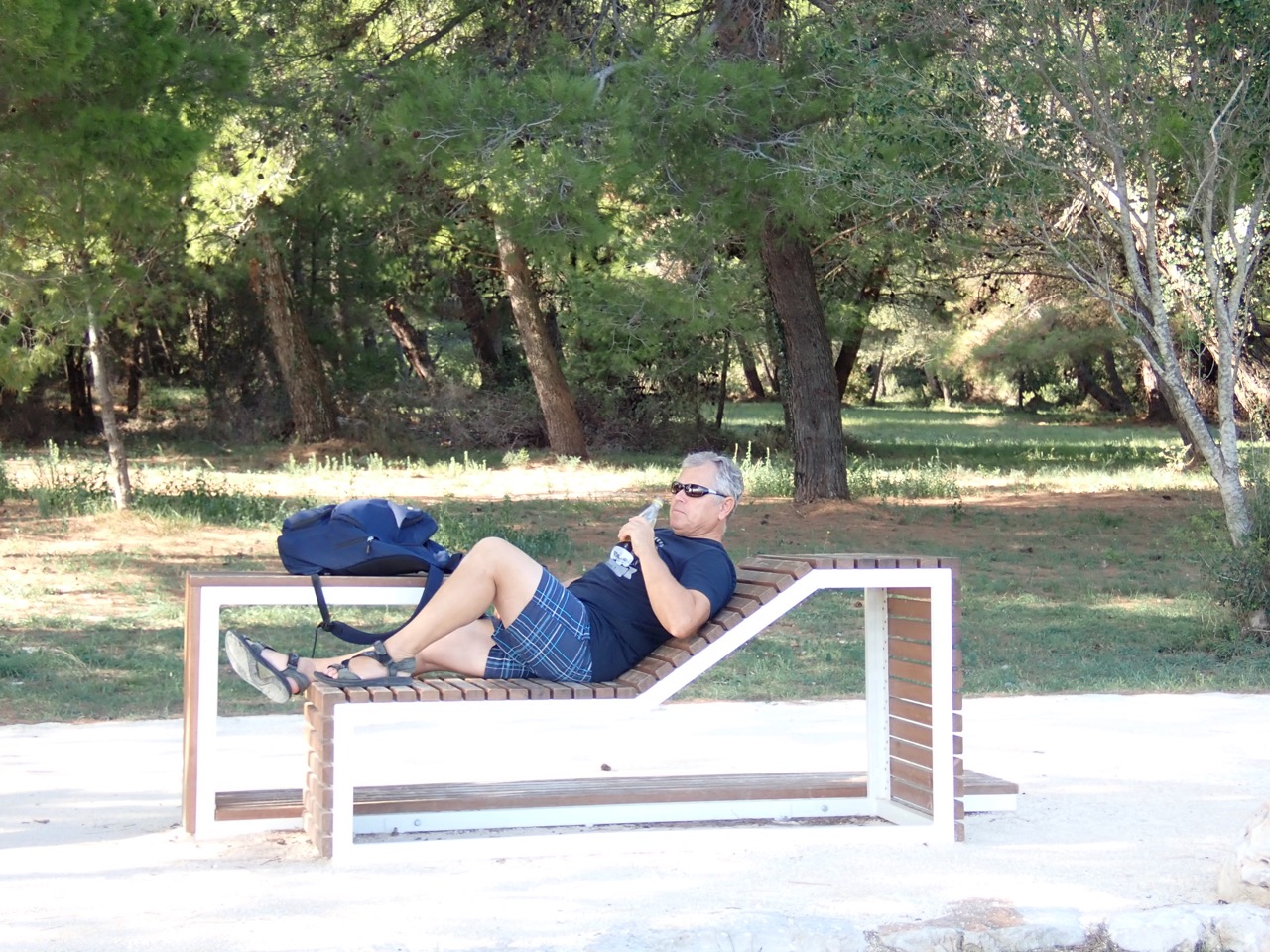 I don't know these flowers, but they were very pretty. Some relatives of crocuses maybe... 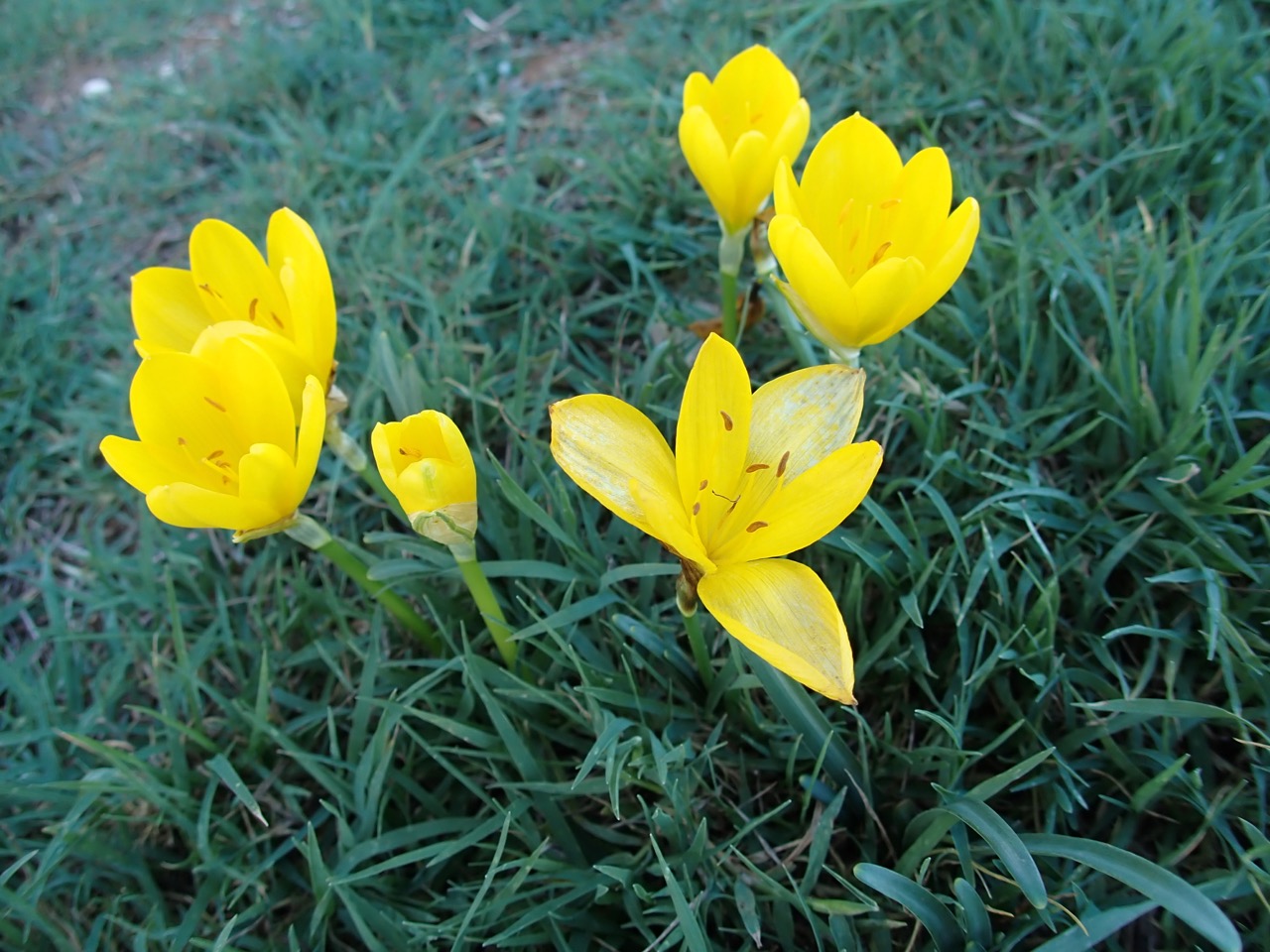 And when the weather got colder and we needed to warm up the boat, I baked Irish soda bread. It was pretty good, the next one was even better. And it takes less than an hour from start to finish, so it's perfect for a late breakfast. 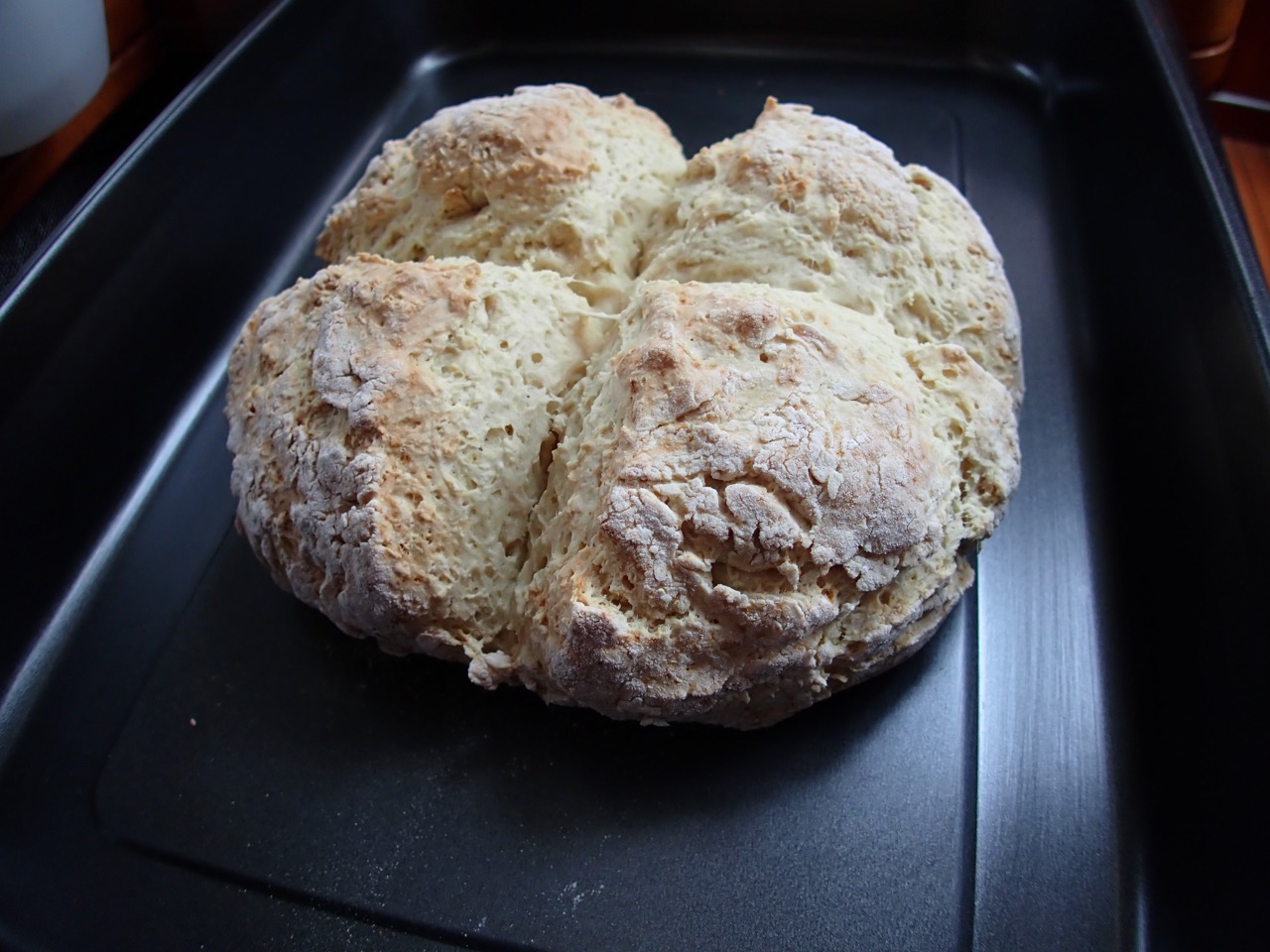 Tomorrow we'll sail up along the West coast of Istria, then to Slovenija the day after and then, probably on Thursday, into marina in Monfalcone. Next time I post it will already be from home.
Posted by Heron at 2:19:00 PM