Plans are being made

And another two weeks later, we are still in marina Lanzarote in Arrecife. On Monday two weeks ago we entered Phase 1 of deescalation process, which brought a little bit more freedom, like going to restaurants and sailing, but no more than 12miles from home port. It actually didn't feel that much different than before, although people seem a bit happier and more optimistic. Still, everything is moving so slow, we are quite fed up with it.

The flowers in marina are still pretty. 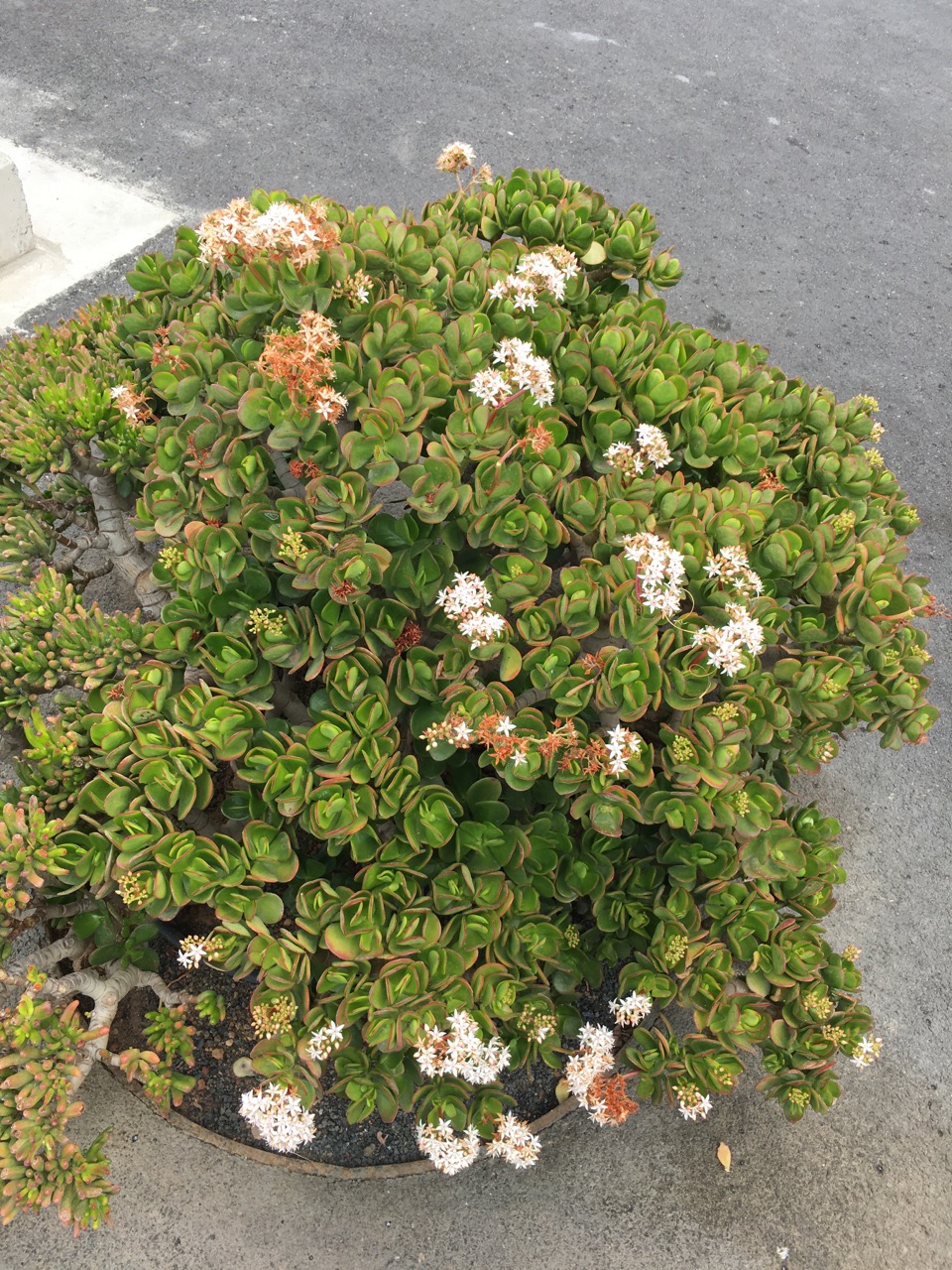 It is getting almost hot and summery here, so they'll need to water the plants even more than before.

Of course we made good use of new rules and visited the pastry shop one afternoon... 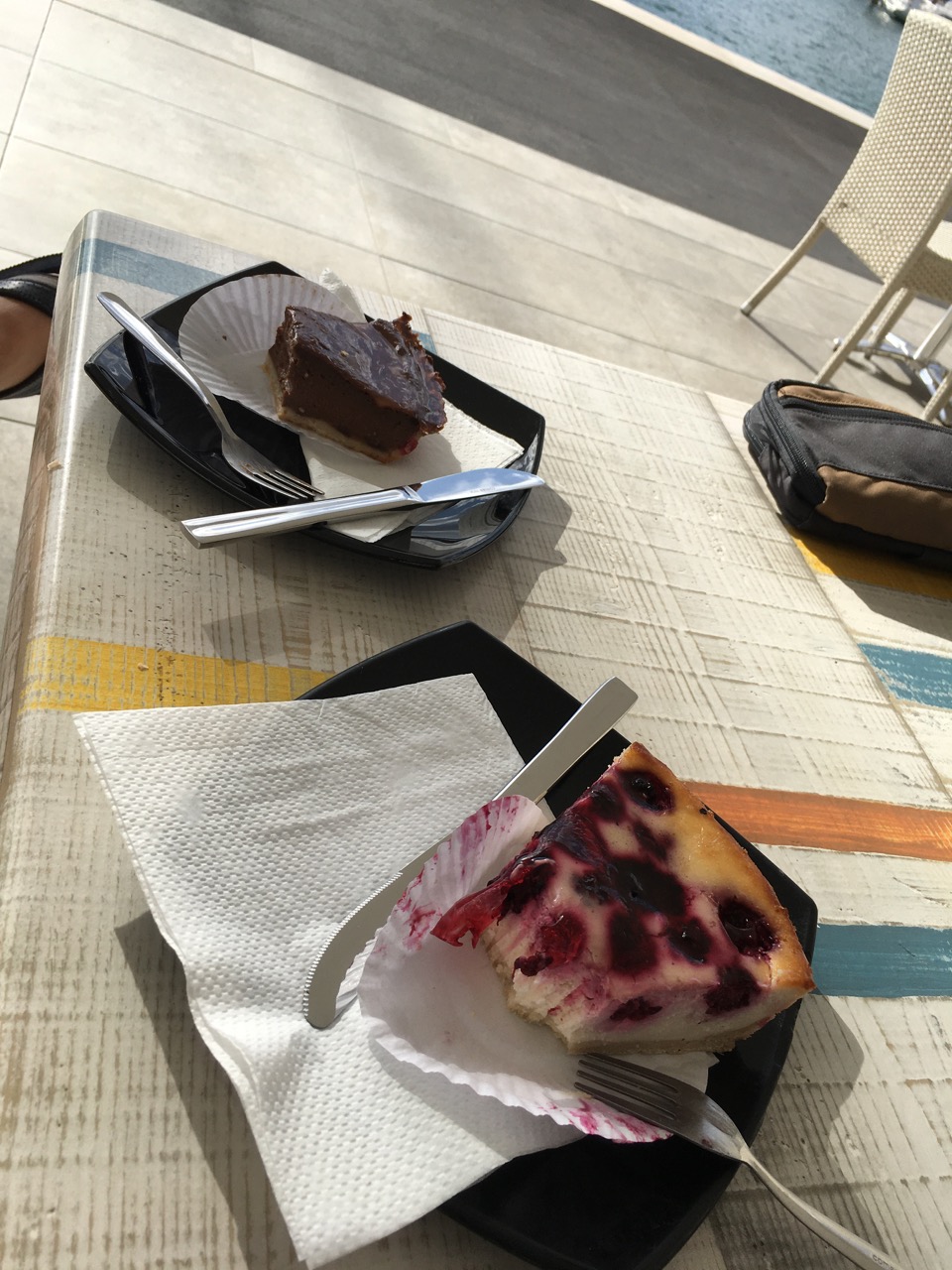 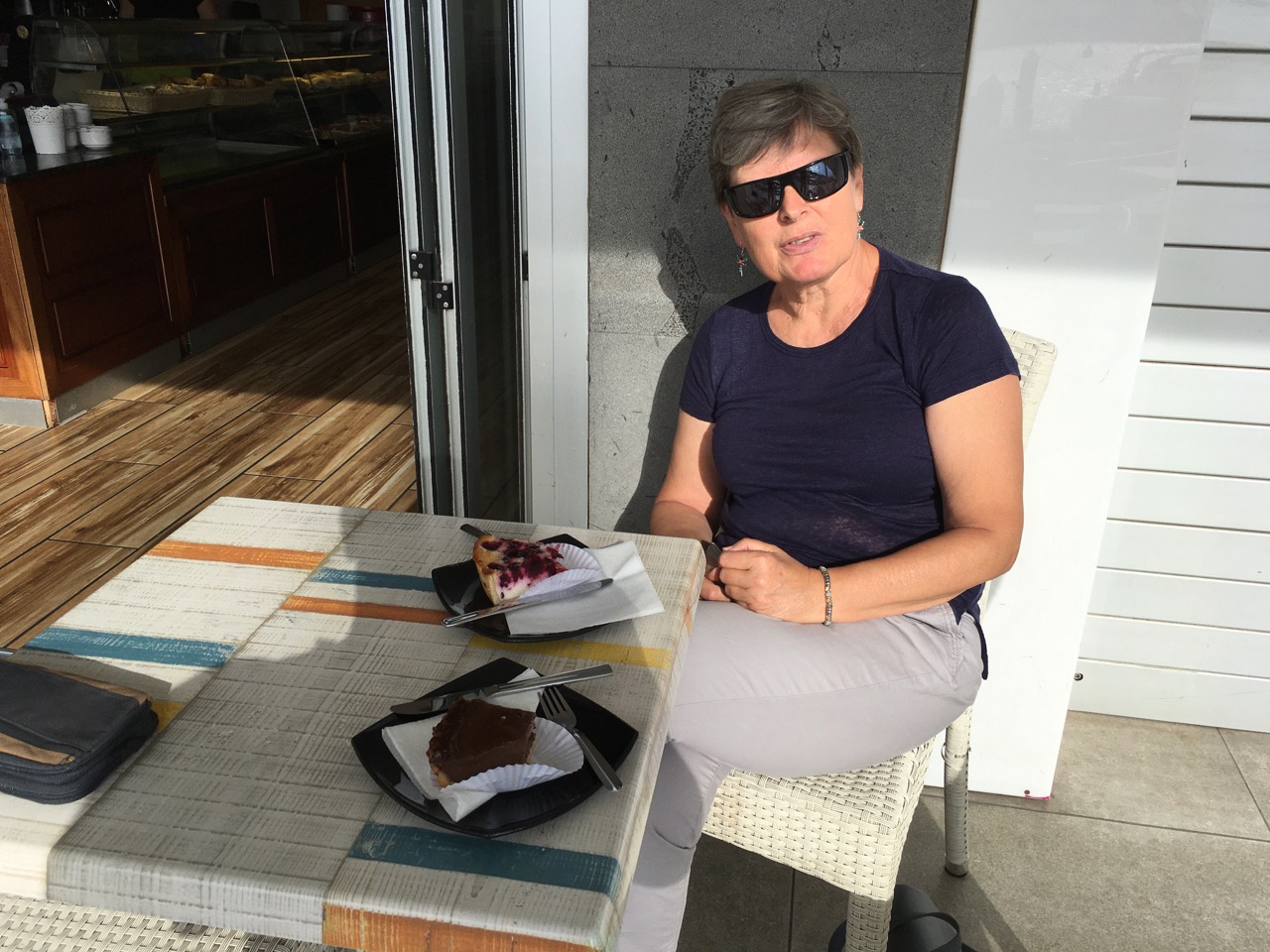 ...(this is the view from the terrace to the marina) 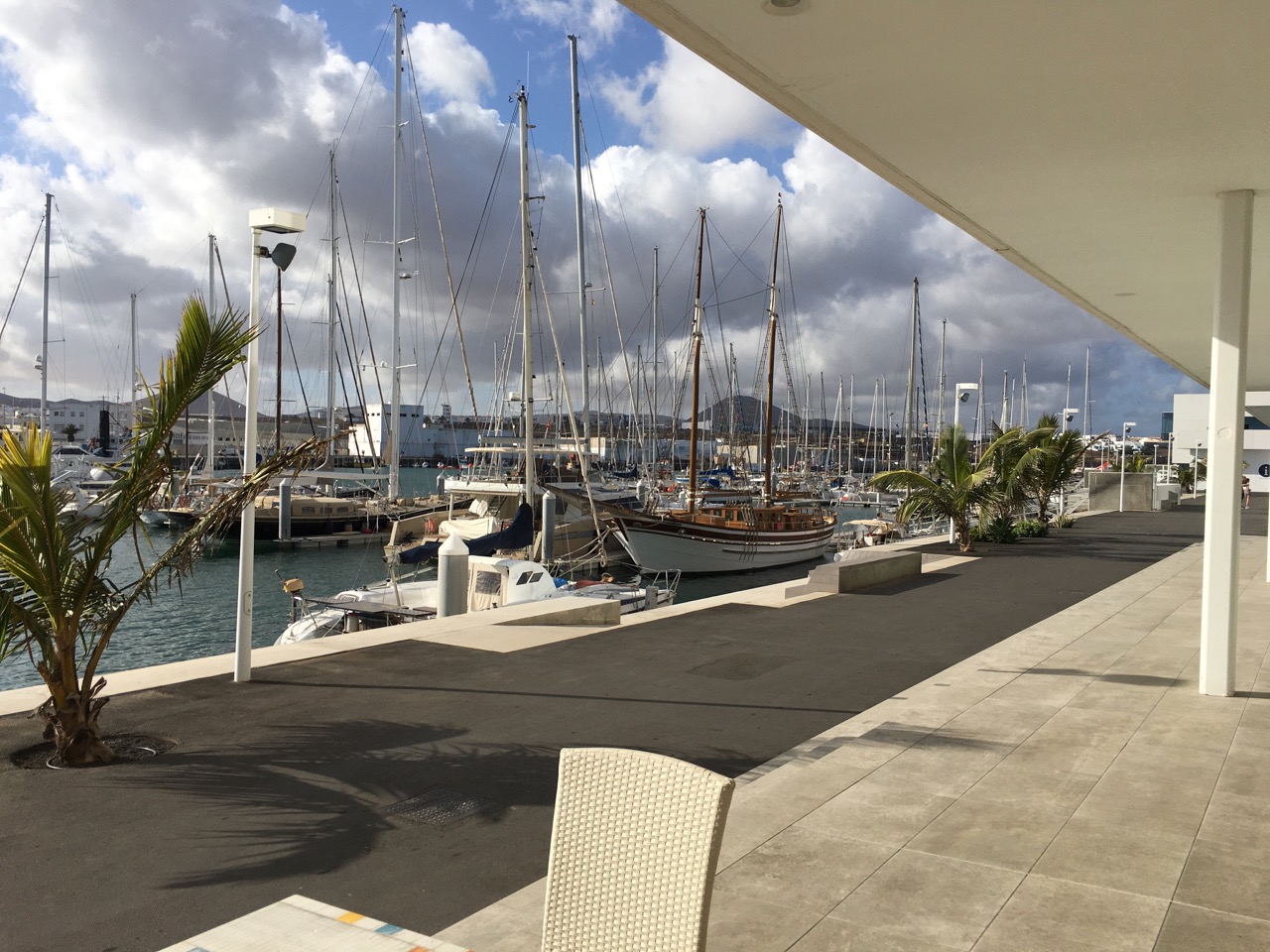 ...and on another day the pizzeria, also here in marina. Pizzas were really good, and beer as well. 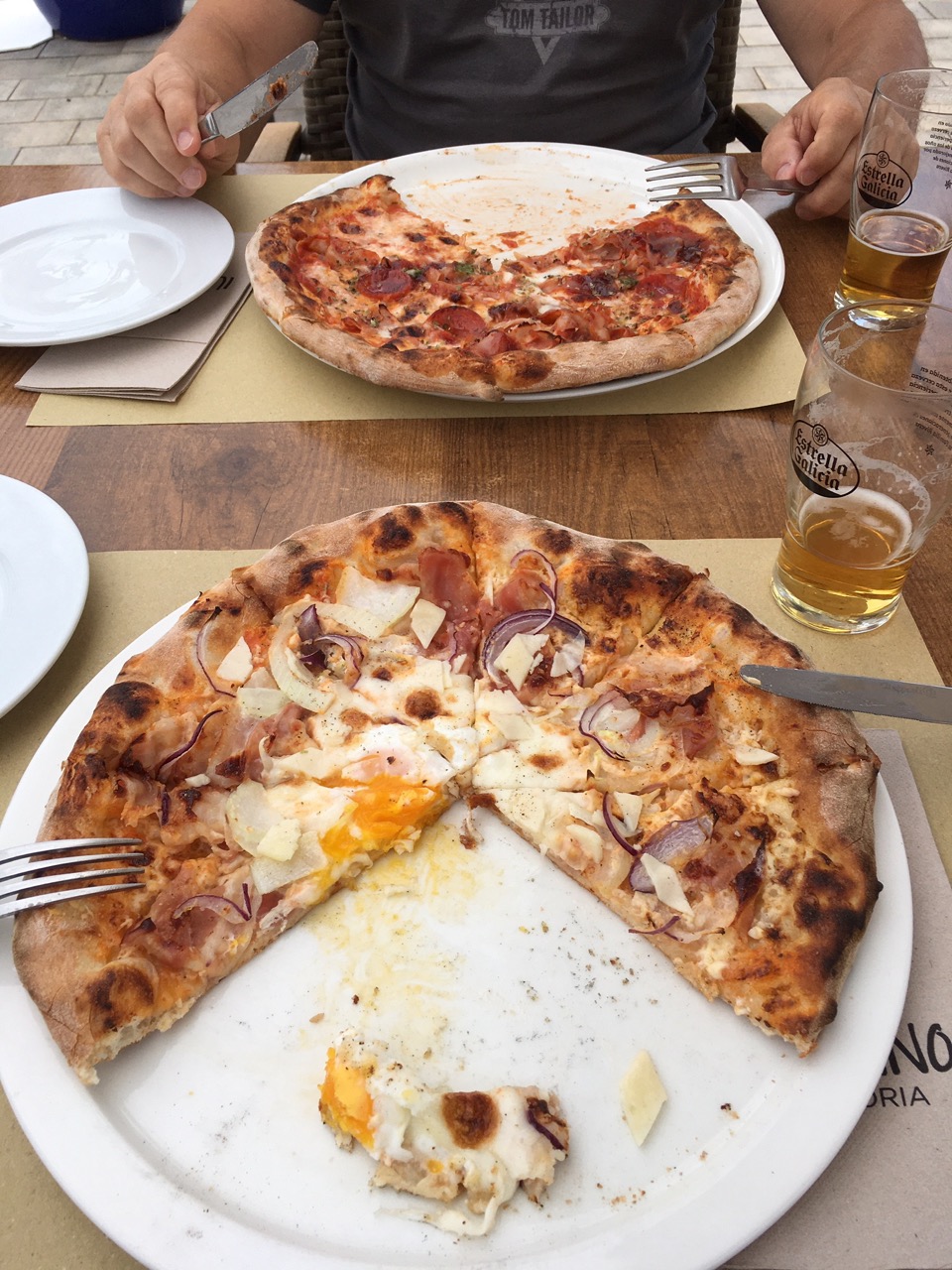 Everybody here in marina is trying to make a good use of the time and we're all doing boat projects. We've done some smaller things, and our French neighbour was changing the windows on his boat. The work on the boat is never completed. 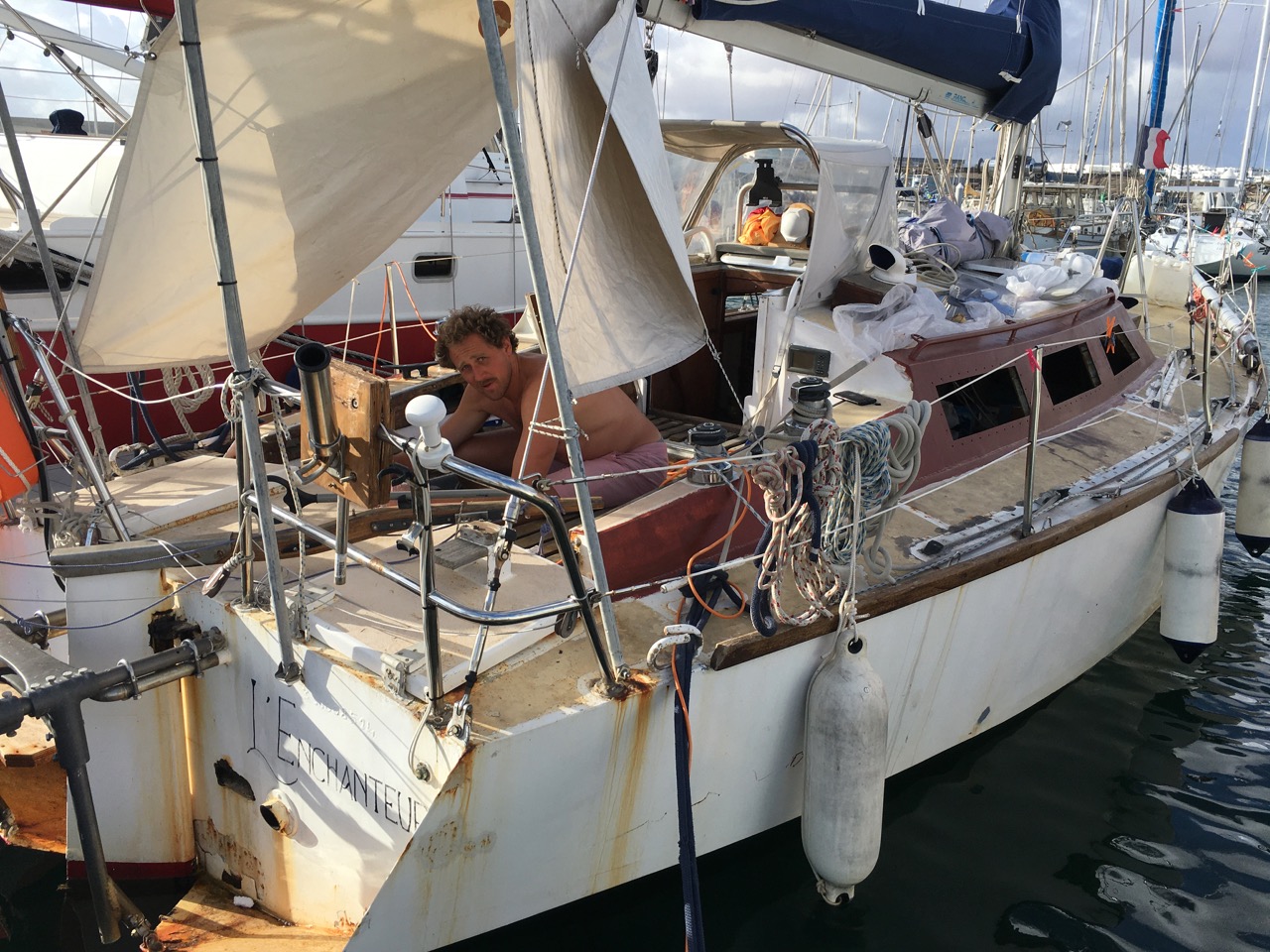 One evening we gathered with him and another neighbour and had a BBQ on Heron. It was really nice, we never ran out of topics to talk about. 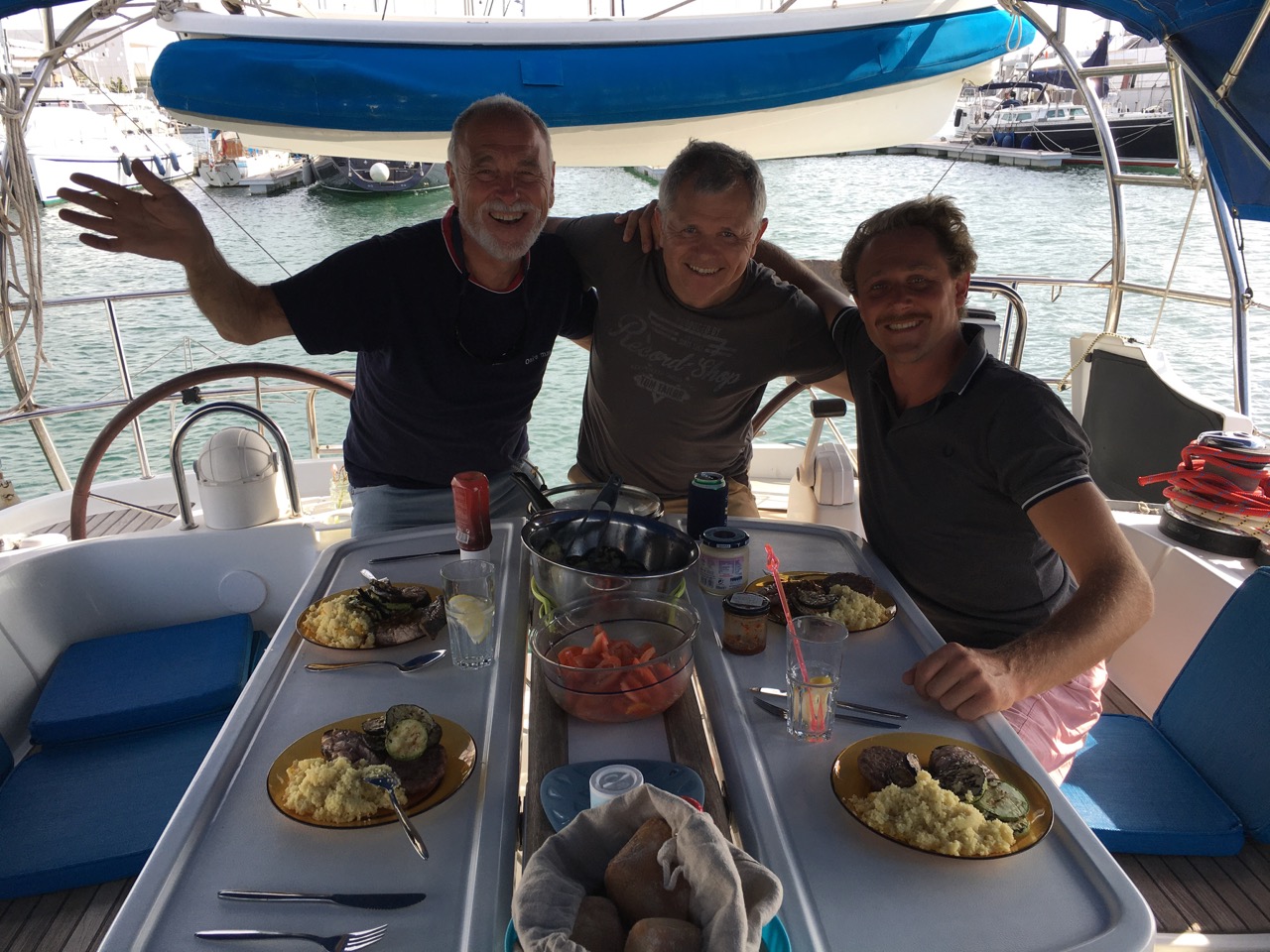 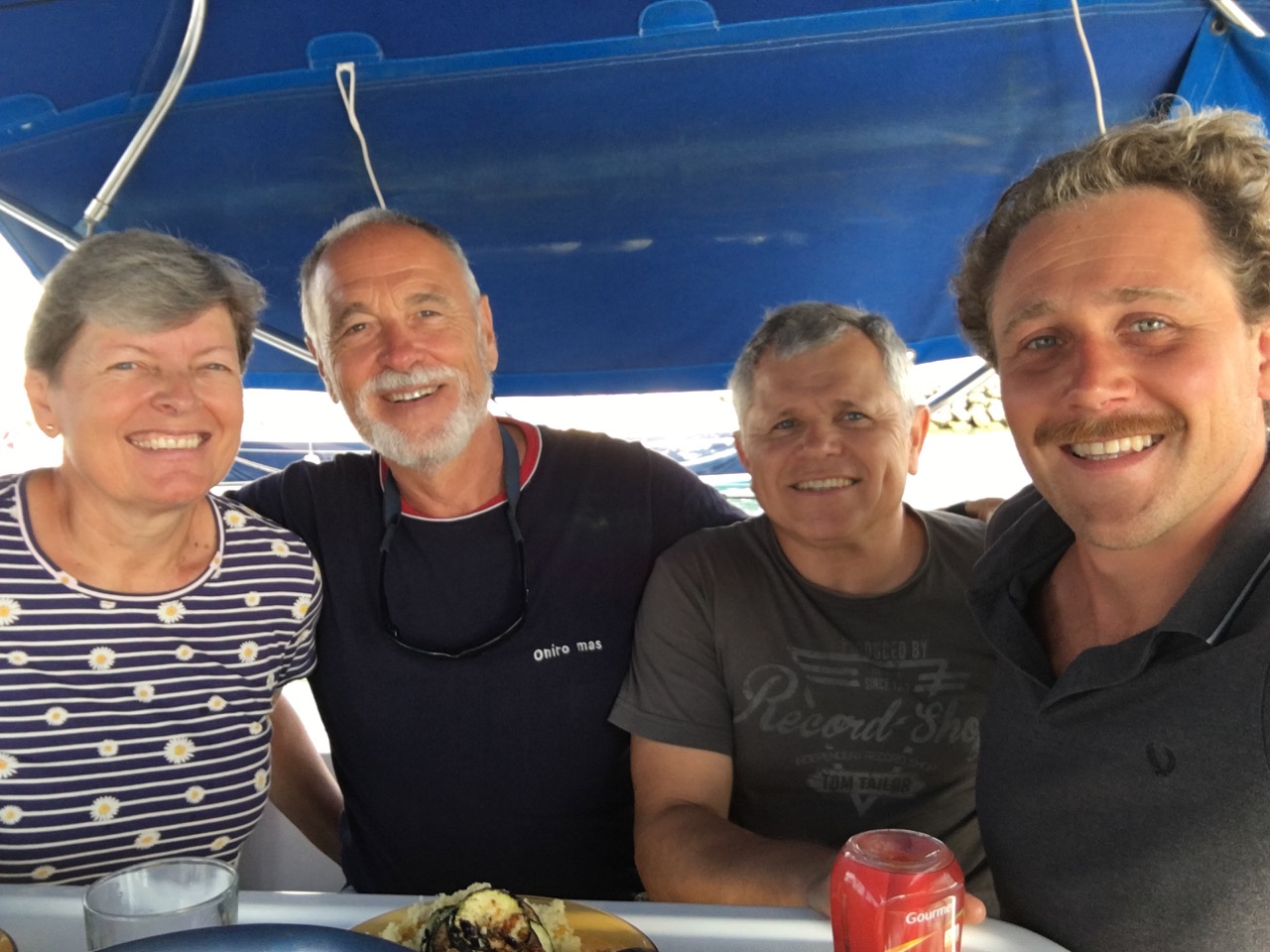 Captain decided it was time to make a bow-sprit. It is a construction that sticks in front of the boat and holds one lower corner of gennacker sail, that is used in light winds, mainly from behind. Till now we've always improvised with chain or lines, but now Captain wants it to be done properly. It will look something like that. 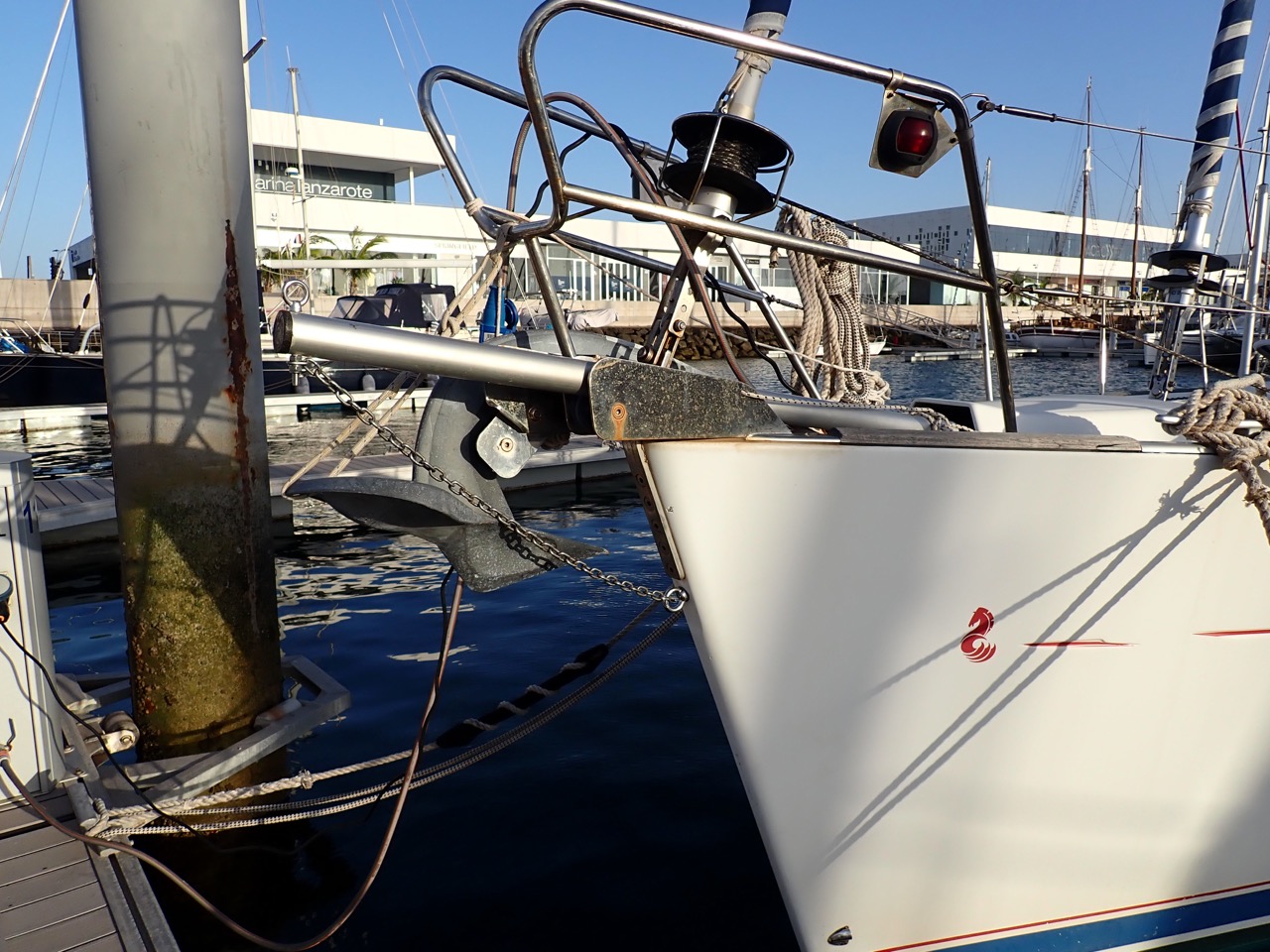 So first we started with another attachment point at our bow, where we can "anchor" the bow sprit.
For that we needed to empty the anchor locker and we found something that looked like a wasps nest, but it was already empty. 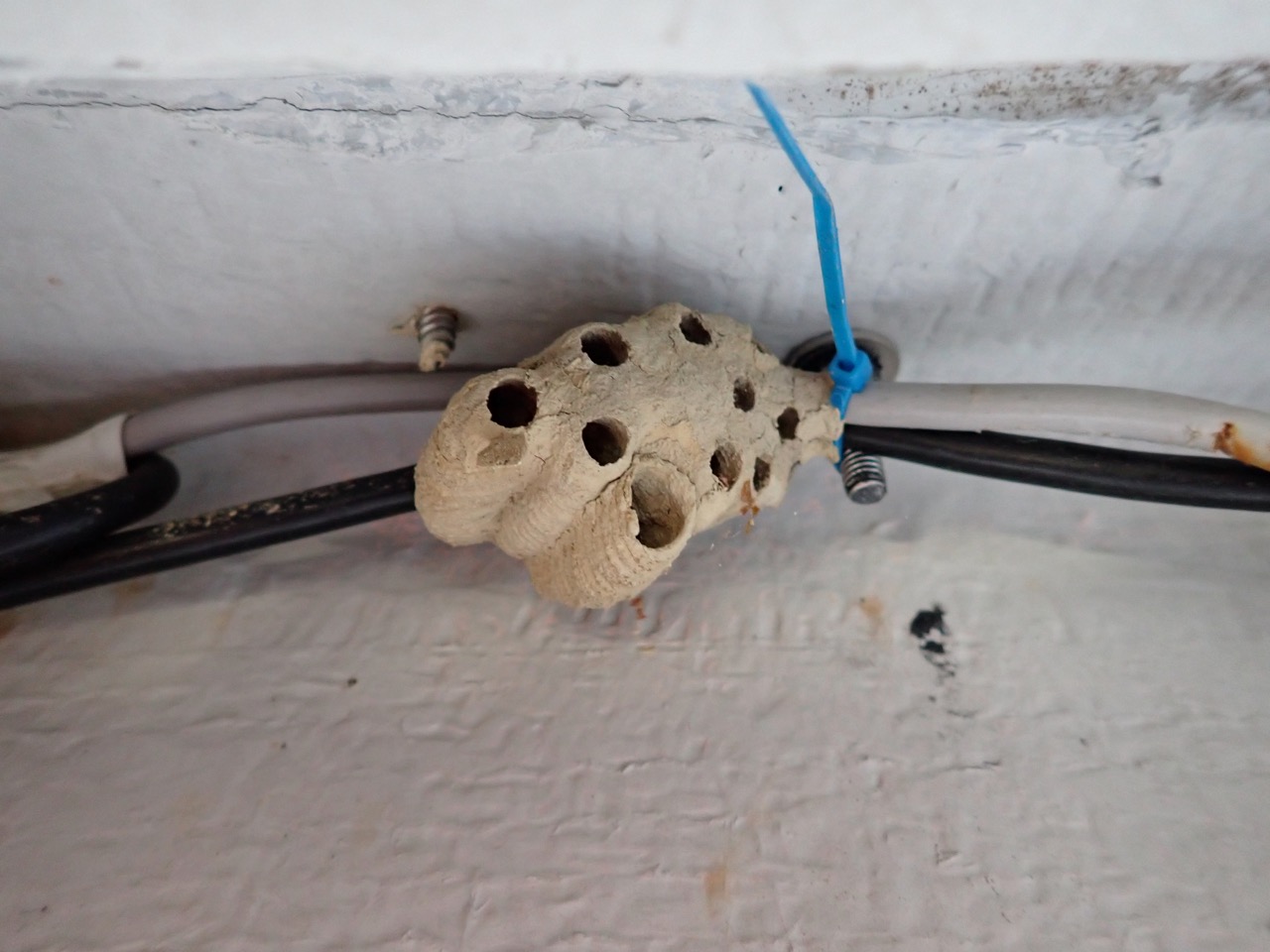 And we put all the anchor chain onto pontoon, so Captain could drill the hole through the hull. We noticed that the oldest part of the chain was quite rusty. It is the last 30m of the chain, which we rarely use, so Captain just cleaned it with acid. 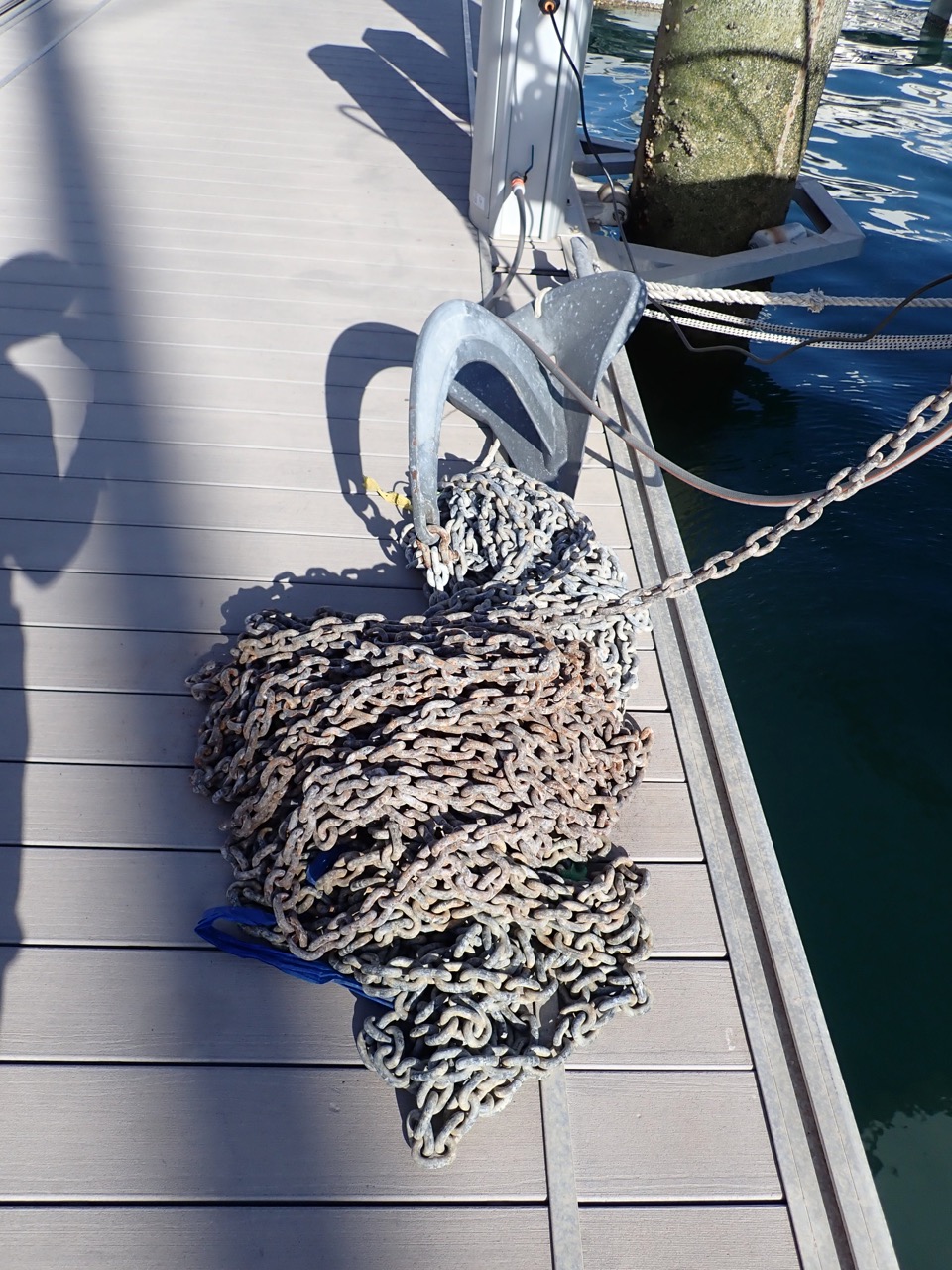 The hole in the hull is drilled and the attachment ring in place below the stainless plate. 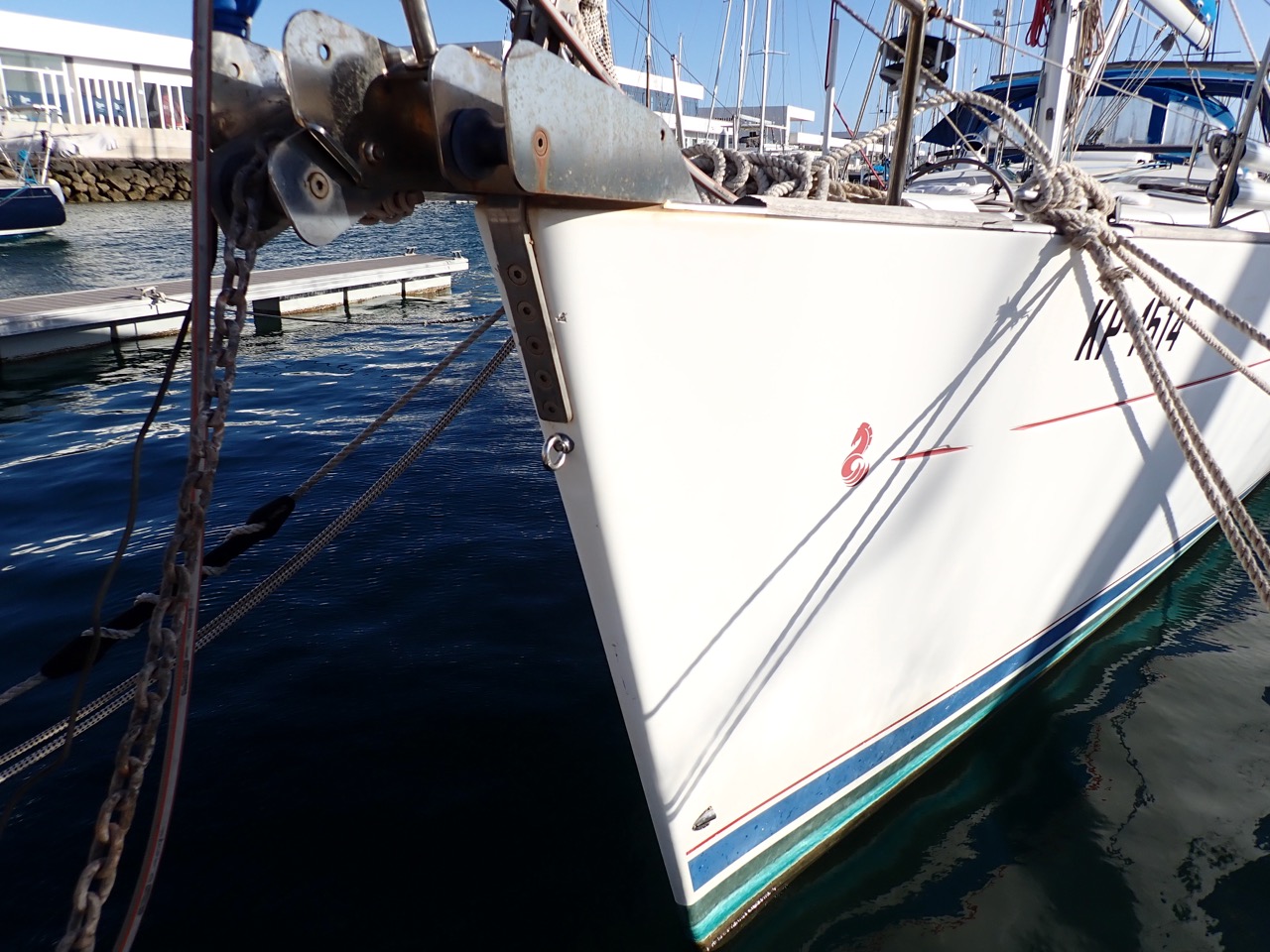 The clean chain looks much better as well. 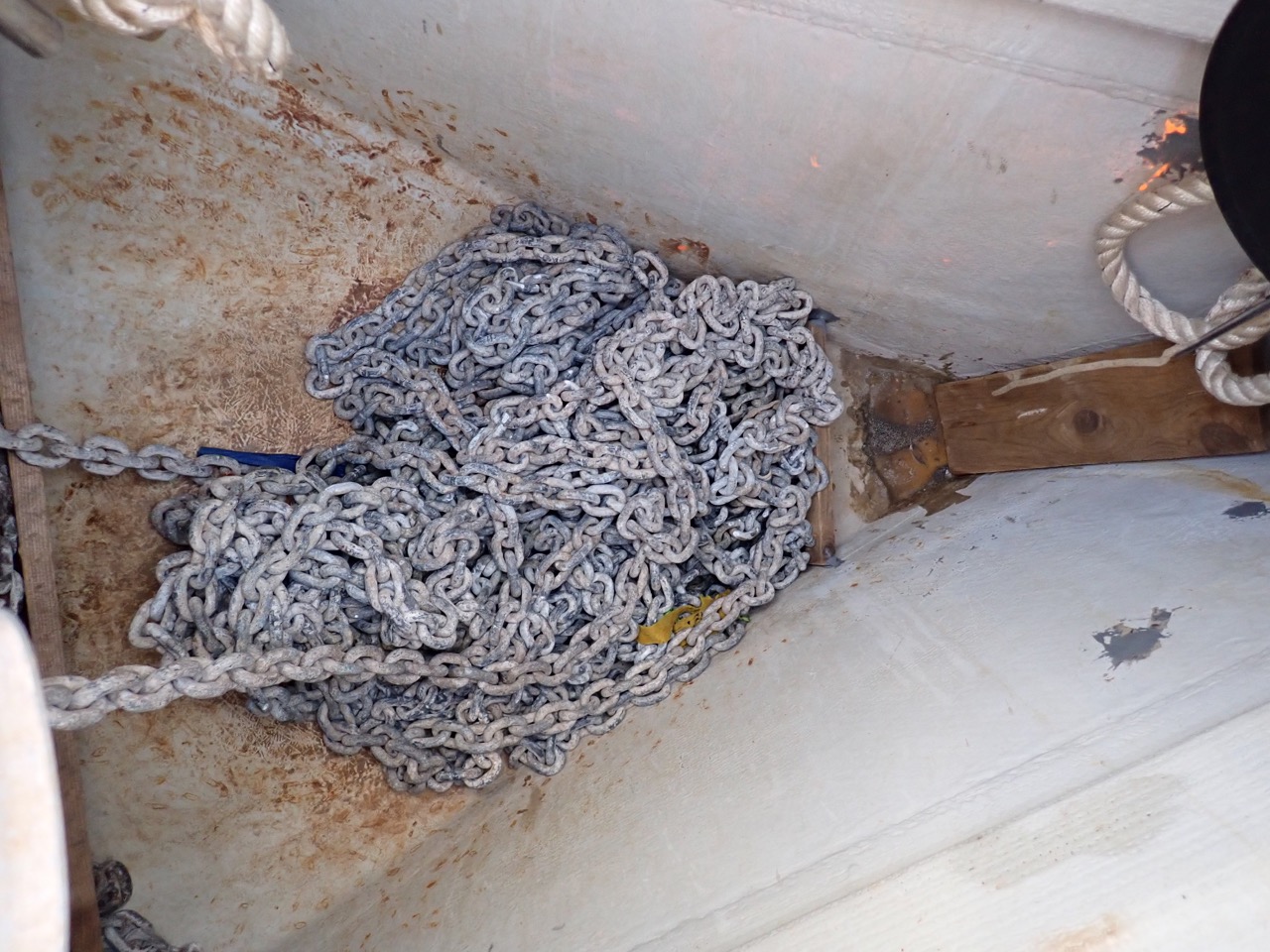 Tomorrow Captain is going to the chandlery to get the missing parts for bow sprit, and then we can install it. It might come very handy, because there's often very little wind in Mediterranean in summer.

Because that's where we are heading. With all the uncertainties and slow development we decided to head East and not West. We've paid marina till next Monday and then we are just waiting for favourable weather and sail first to Madeira, rest on anchor for a day or two, and then on to Gibraltar and into Mediterranean. We won't be allowed on land in Madeira, although we would like to do some sight seeing, but Portuguese borders are still closed. Maybe some other time. We'll stop in Gibraltar to fuel up and maybe get some food, if we're allowed on land. It is not clear yet if we'll be allowed to go on land anywhere else in Spain, maybe by the time we get to Almerimar or Cartagena in couple of weeks, situation will be more normal than now. And we hope that Italy and Greece open up as well by summer and we'll be able to do some cruising in Sardinia, South Italy and in Greece. But, for now these are just speculations and as a wise man once said: plans are made to be changed.

Still, in next week we're stocking up the boat with food, so we don't have to go hungry if we can't go shopping while on our way. We're excited because we have a plan! I'm not looking forward to sail for a week into the wind and waves to get to Gibraltar, and even from there it's a long way to Greece or even home, but at least something is happening. And that's already better than to sit here in frustration.
Posted by Heron at 3:49:00 PM