More about boat projects and cats

And two and a half weeks later we are still in Lanzarote, and not much has changed. We're still in a severe lock-down and despite lots of talk of softening some of the rules or even getting them lifted, nothing happened so far. The lock-down has been prolonged till 10th of May. We'll see when we will be able to go for a walk, a swim, or even sail between the islands.

We were constantly checking on our cat family - this is mom, very friendly and talkative. 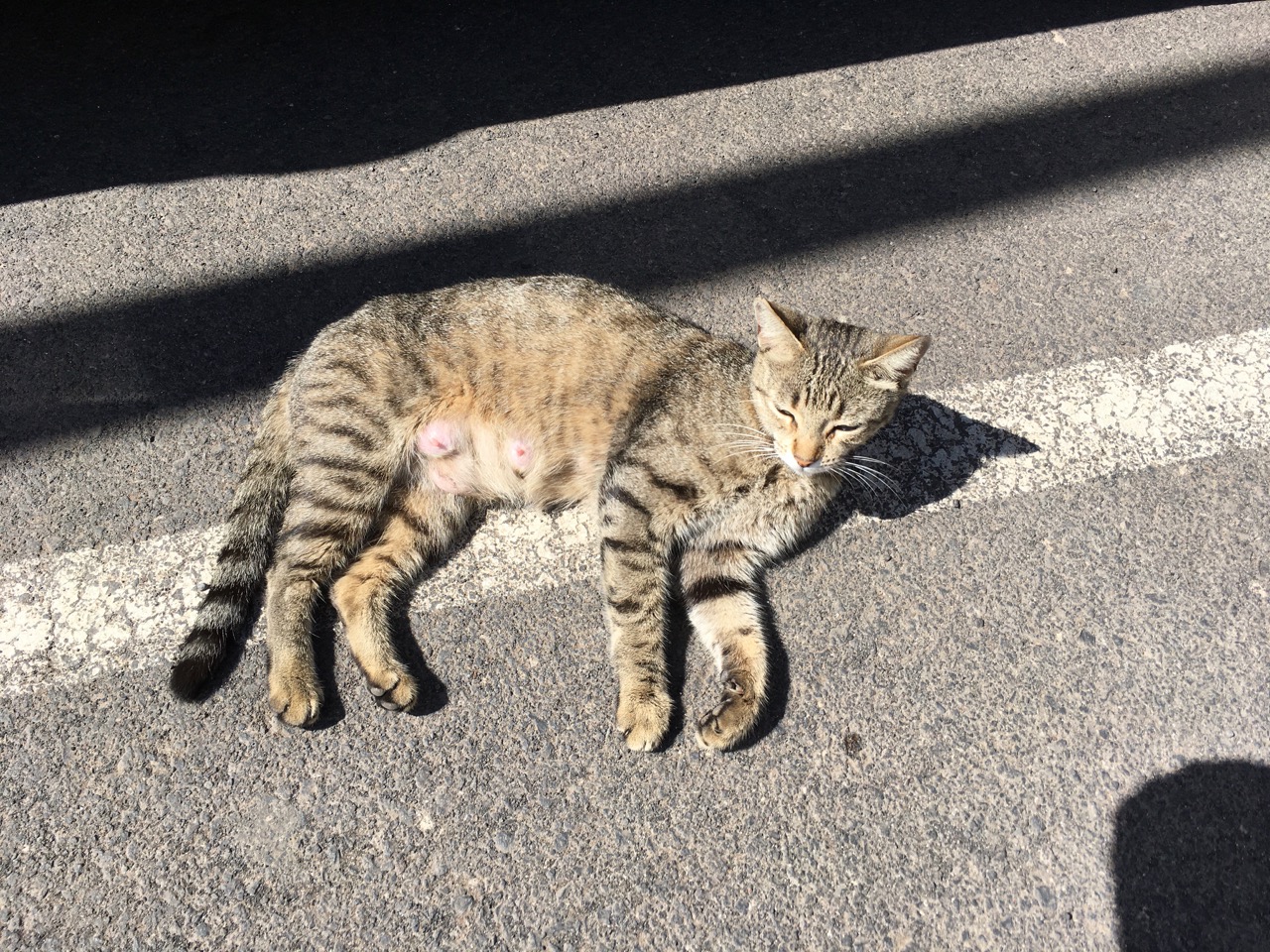 She moved the babies from an older bigger sailboat to a car on the carpark, where they all lived under the hood of a car. Babies are sooooo cute. Half of the marina was feeding them and bringing them water. 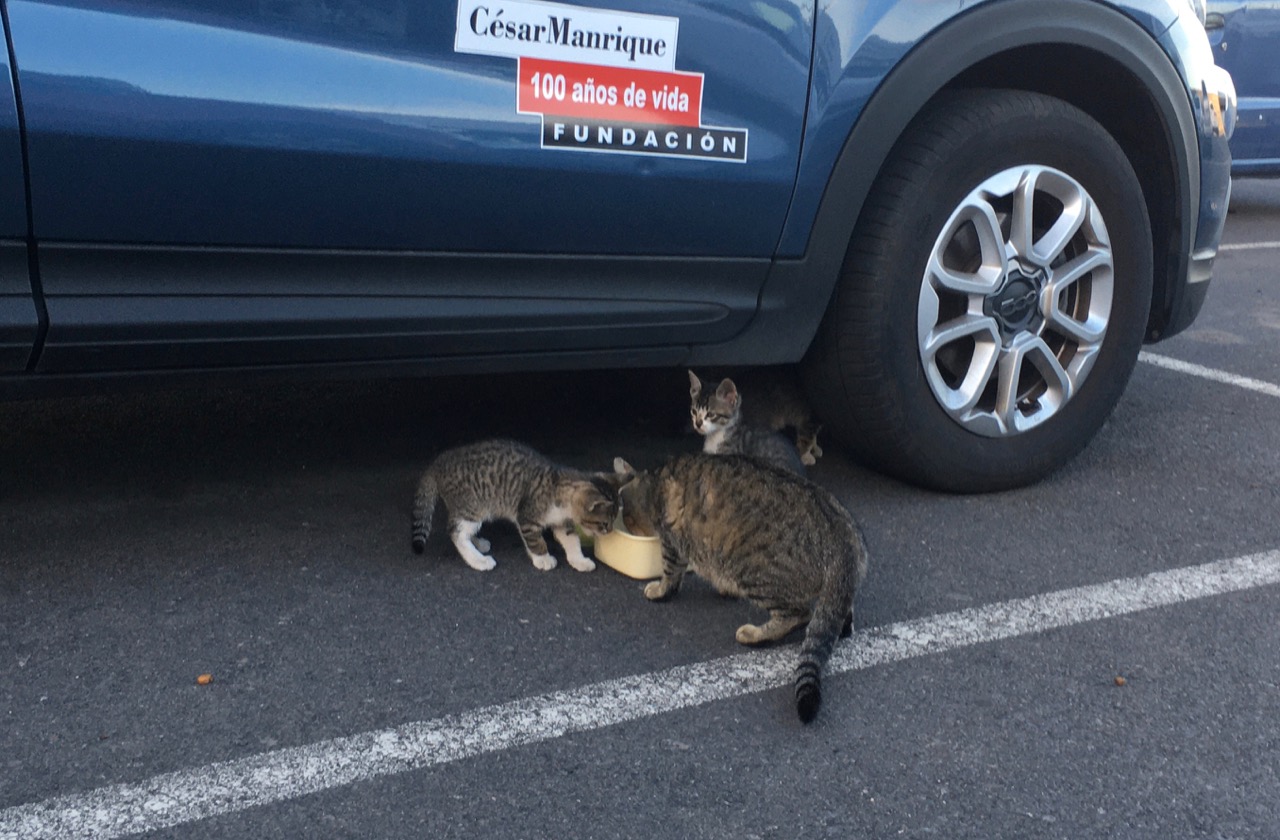 There's four of them, apparently the fifth fell in the water and drowned when mama was moving them. Poor baby. As the babies were growing, they moved to a bigger car. Logical. 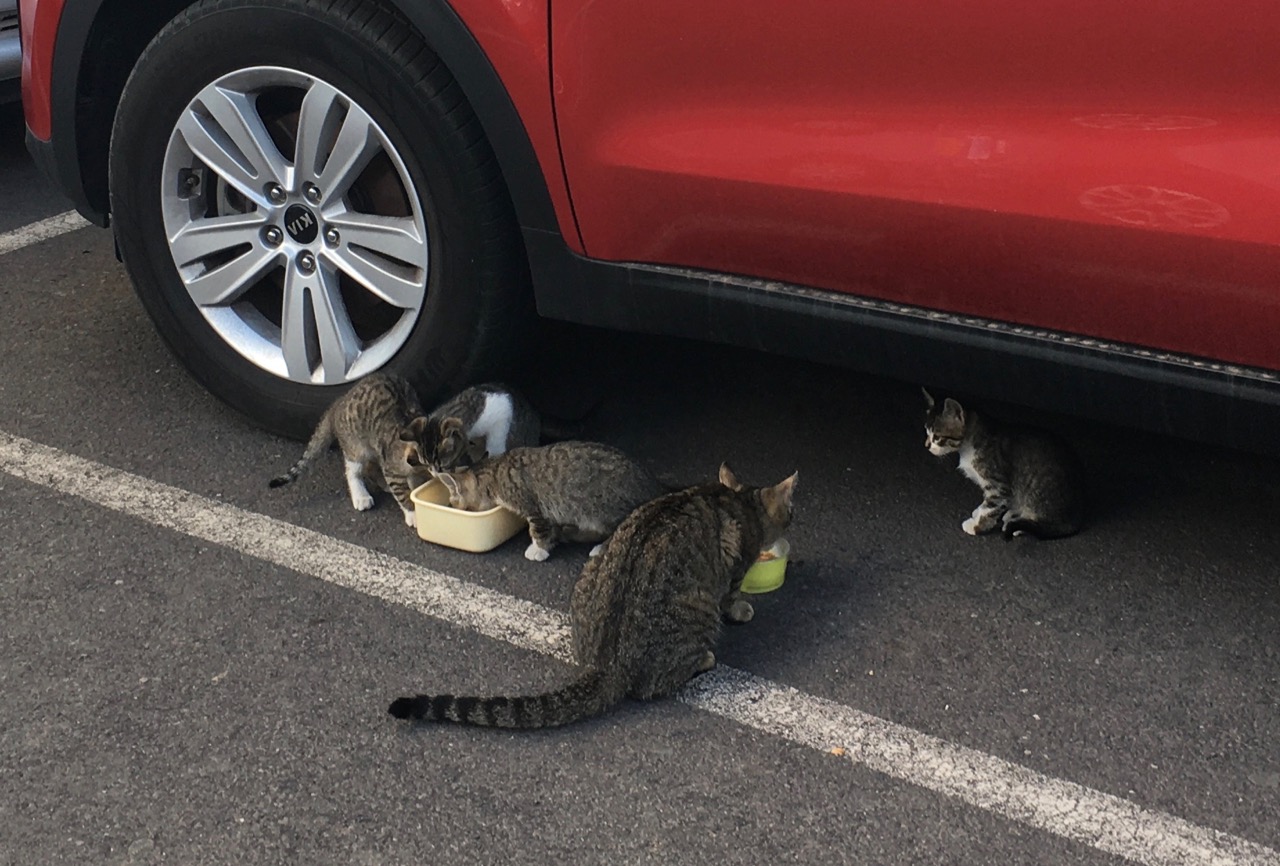 This one was particularly brave and active... 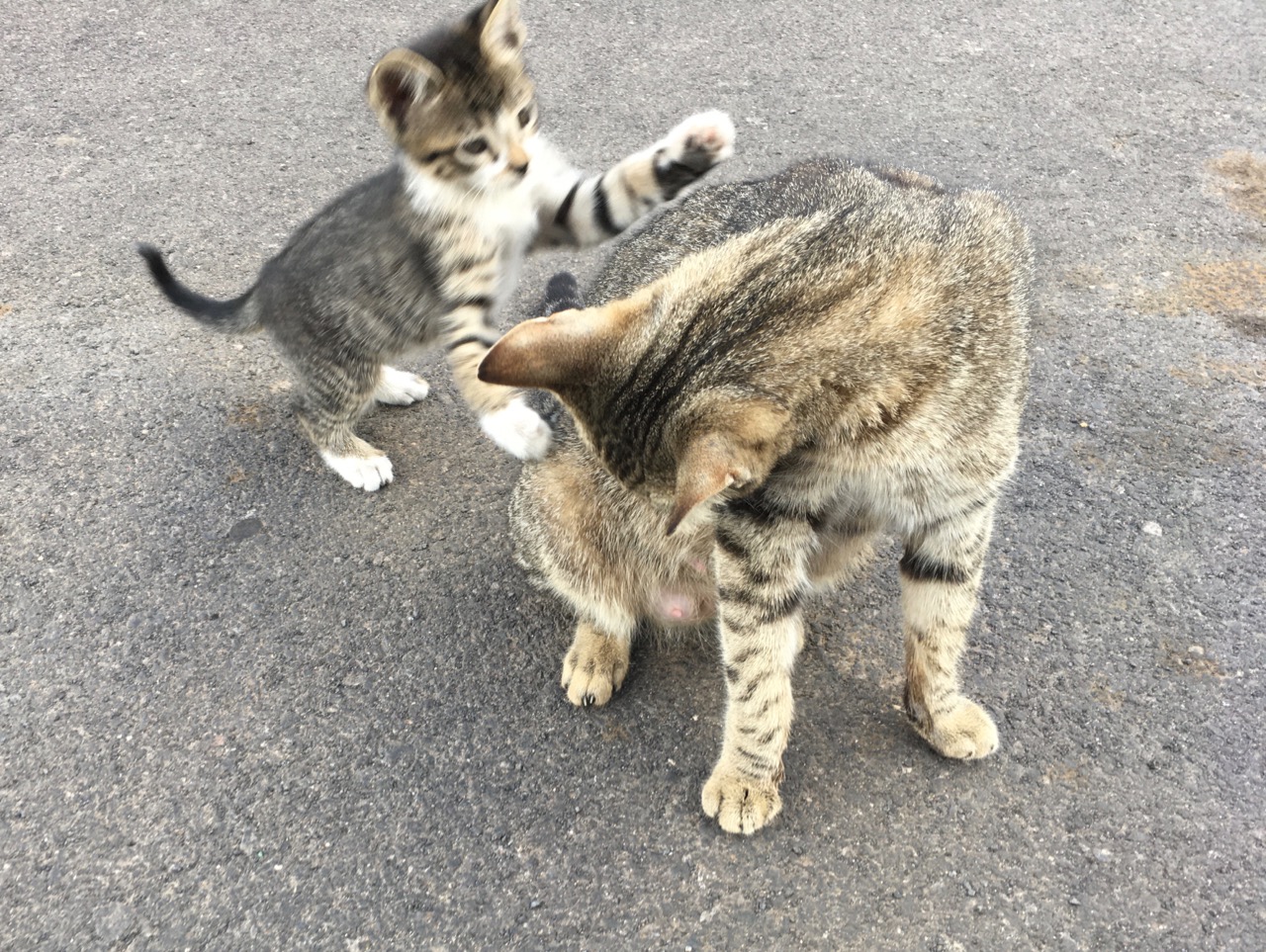 ...and probably the cutest. 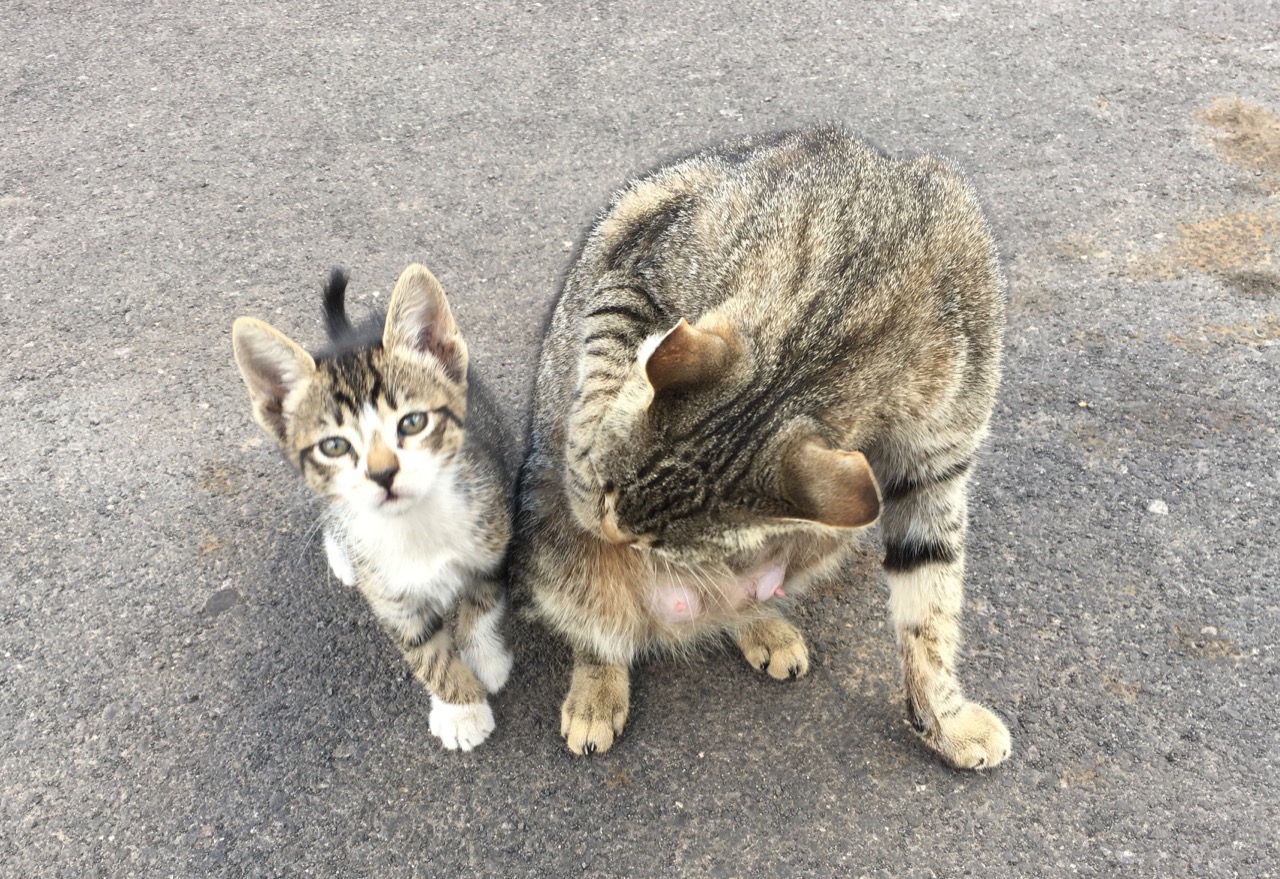 This is the last photo I have of all four of them, because couple of days ago the people from animal shelter started to catch them. They were afraid that when the cars start moving again, babies would be in danger. 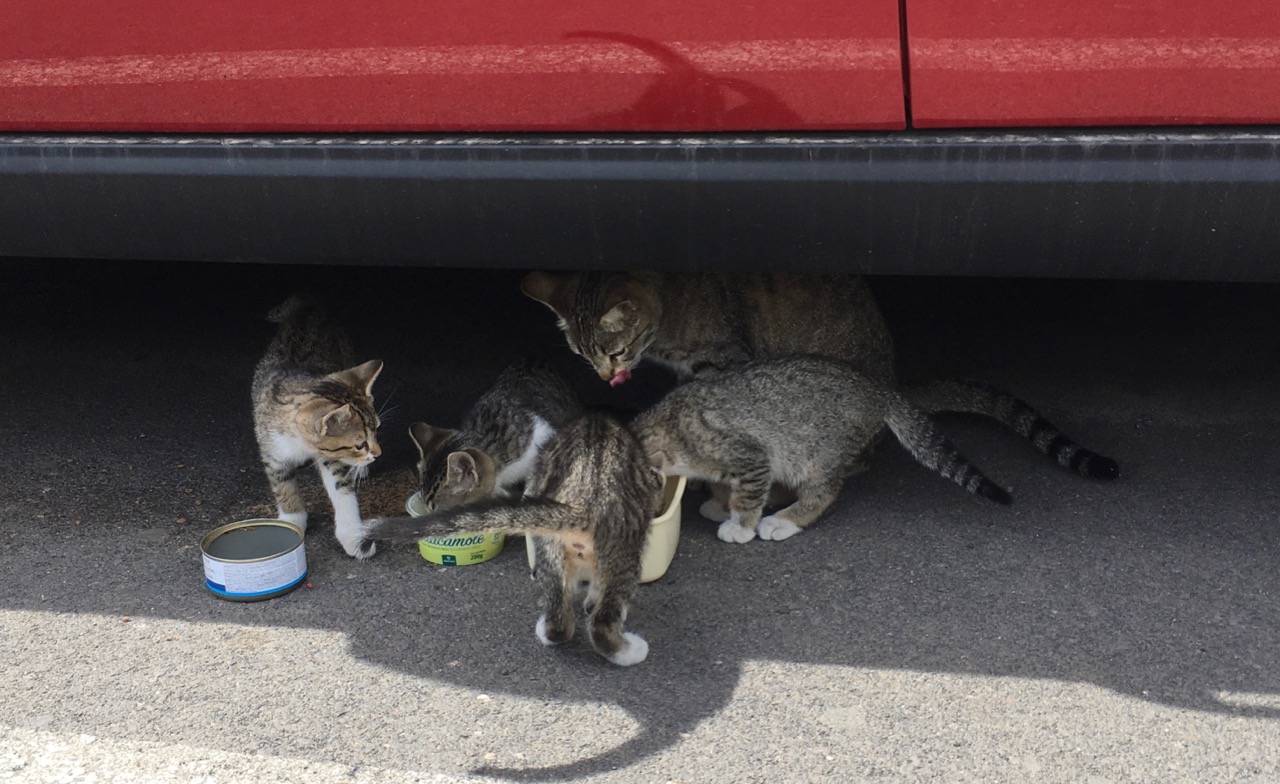 Next days there were only three left. 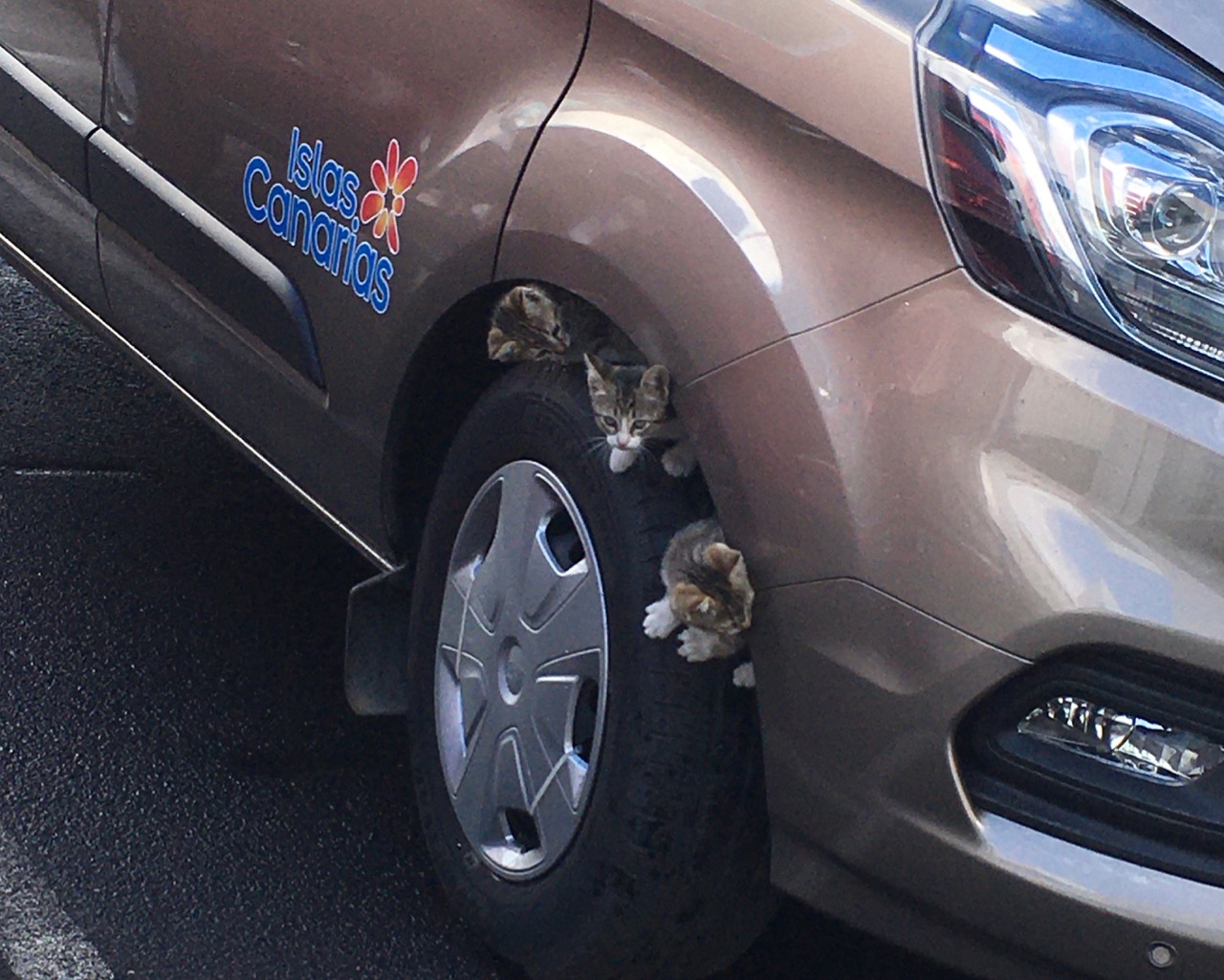 They caught them in next two days. They were all vaccinated and mama was also brought to the vet and got a surgery, so now she can't have babies any more. A couple from Argentina is going to adopt her, and a couple from Swiss adopted one of the babies. So these two are going to live on boats. And the shelter is going to find families for other three babies. The sad thing is that mama cat is missing her babies so much, she is constantly looking around the cars and calling them. Heartbreaking.

While our days still mostly revolve around food, we're still working on boat projects. One of them was to waterproof the sprayhood. Surprisingly we had some rain a week ago and we saw it was leaking. 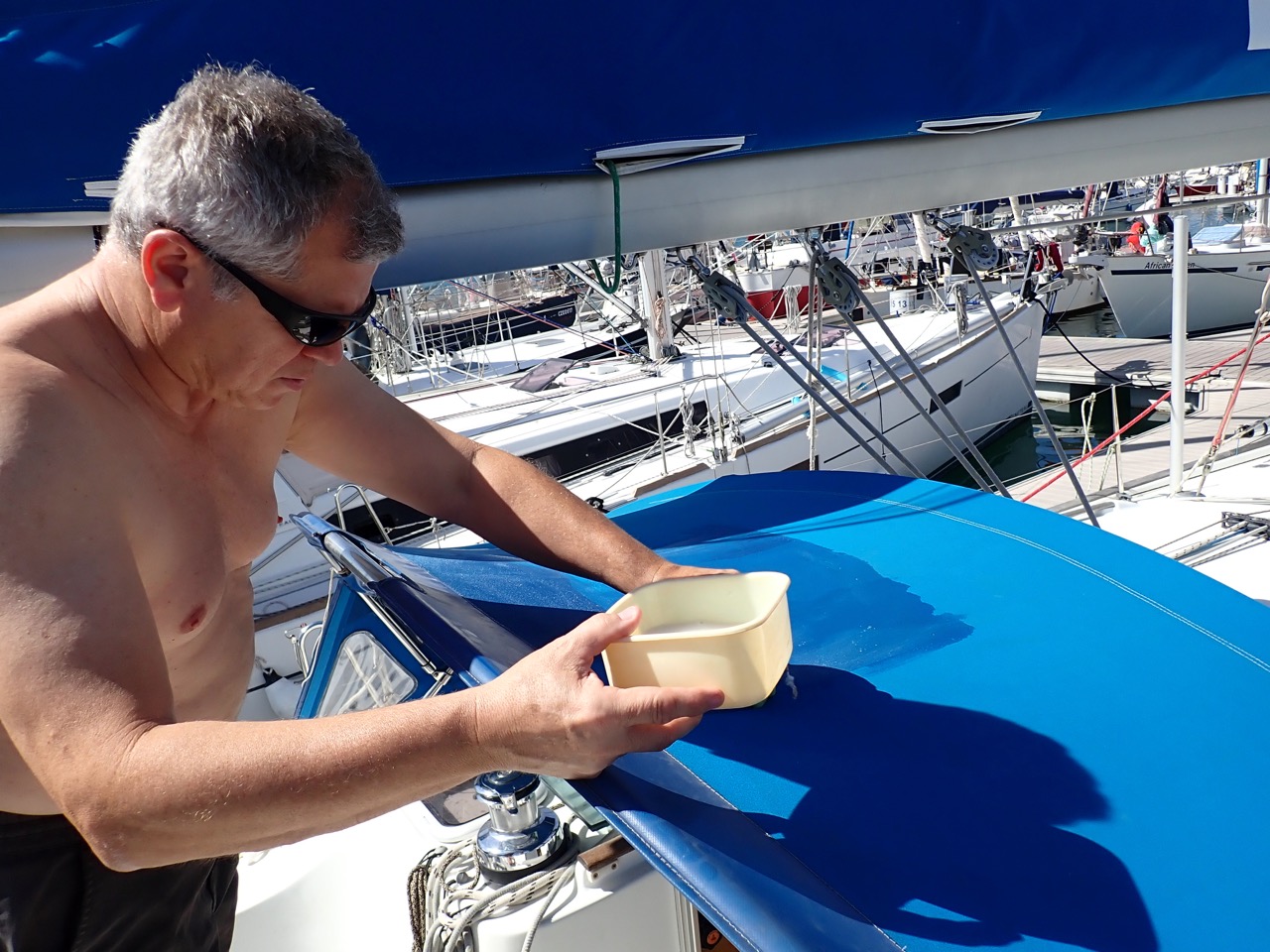 On one of the days, can't remember which one, it all feels like Groundhog day anyway, Captain climbed on the mast to check on things. There was nothing specific to do, but it was a good exercise. 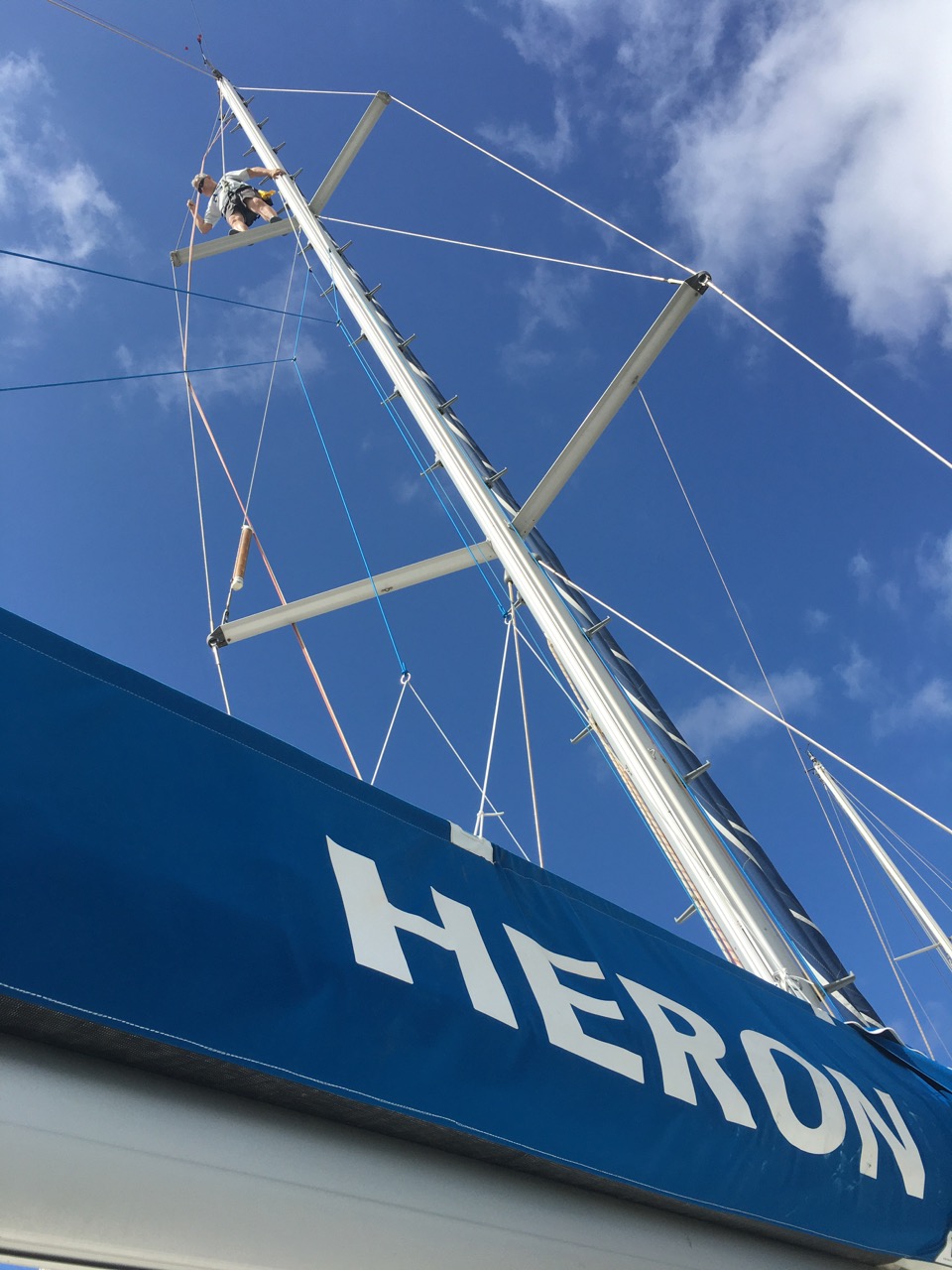 And opportunity to make some photos from up there. 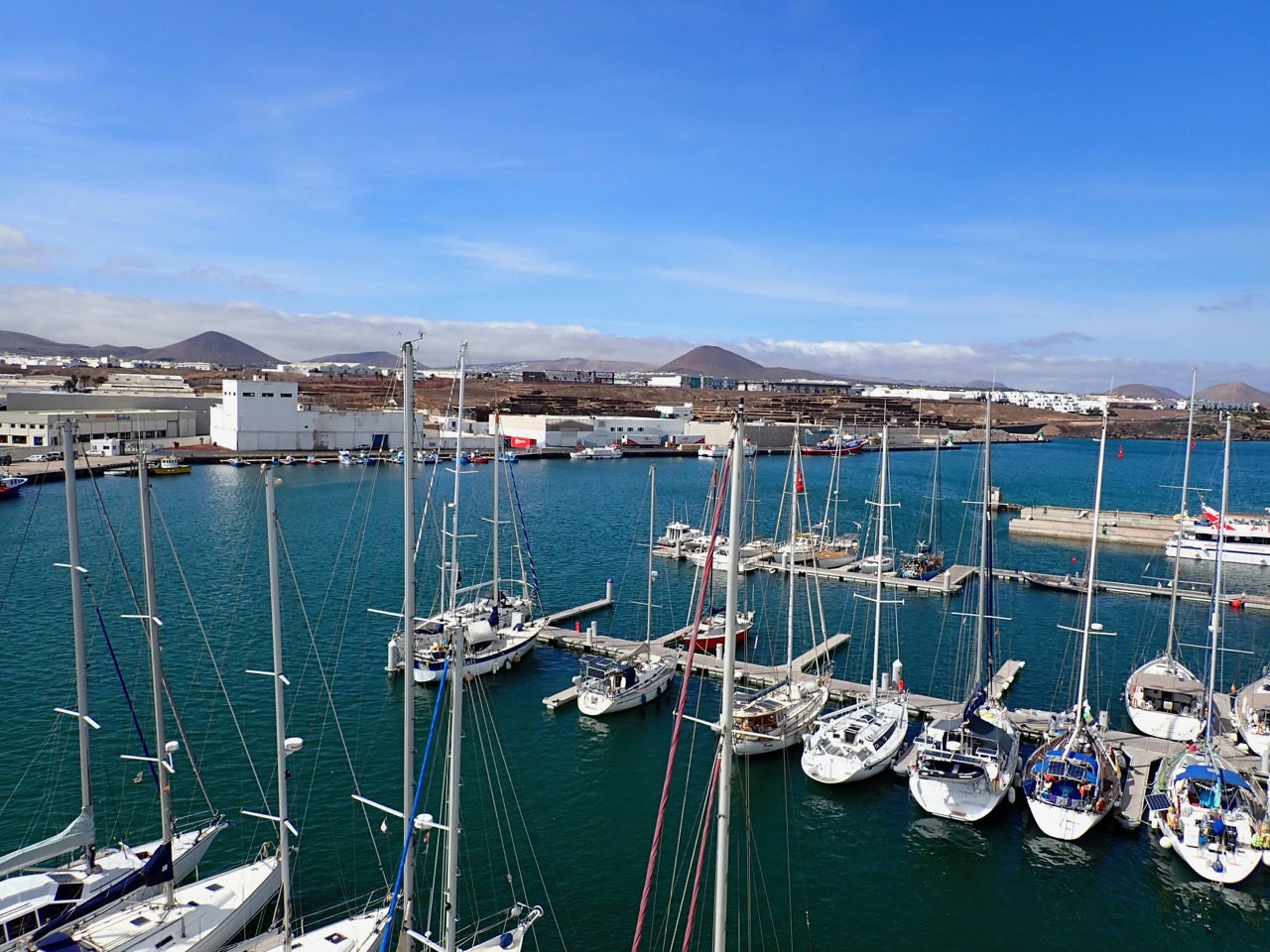 Then we started a big project of replacing a hatch. The old hatch was leaking quite a bit, which wasn't surprising since it has been bent and didn't lay on its frame flat and tight. Probably at some time or other a line came between the hatch lid and the frame, even before we got the boat, because I remember it was always leaking.

This is a new hatch we bought already before we left Monfalcone last June. See how Captain is still smiling at this time. 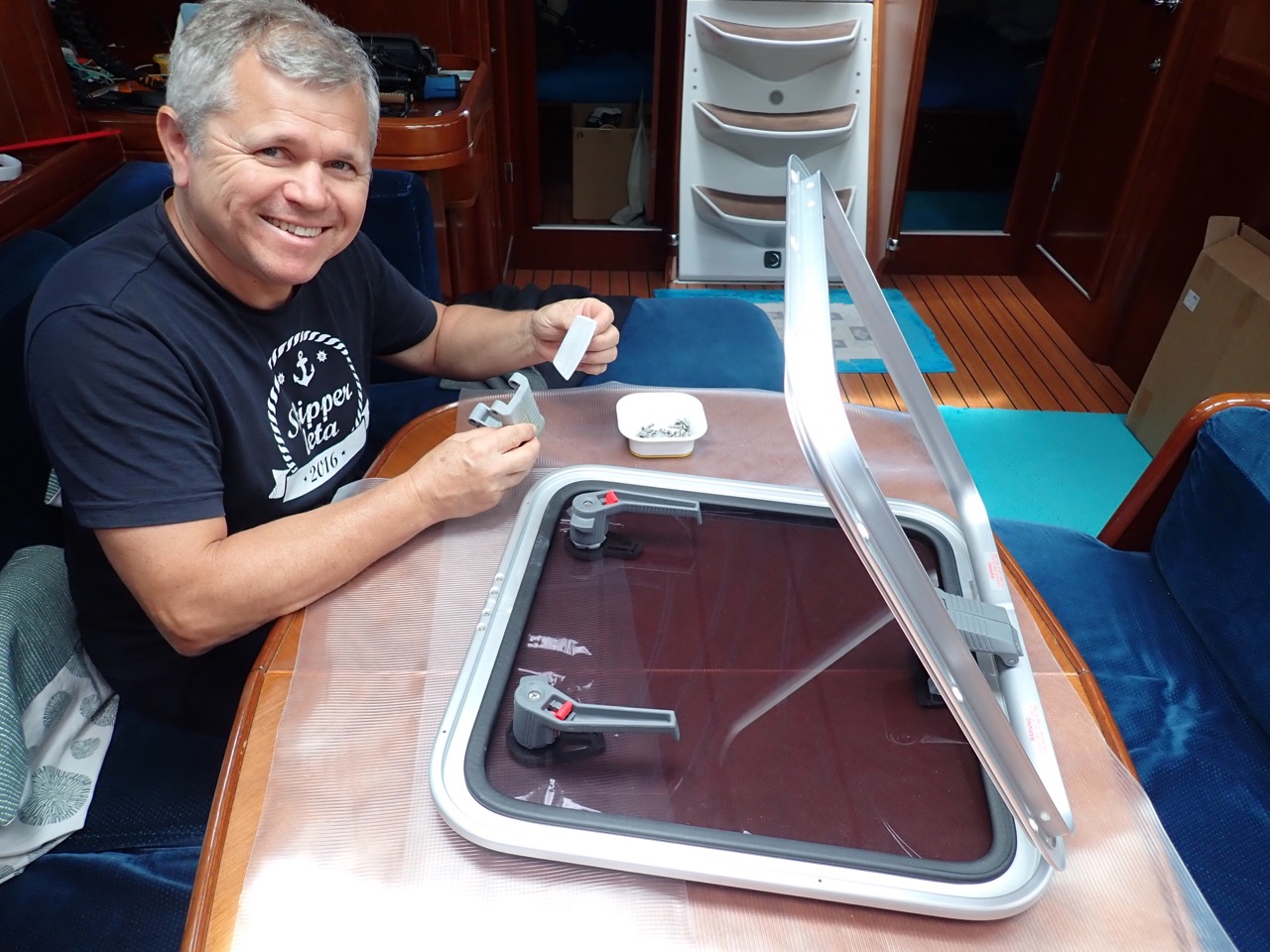 Next step was to remove the old hatch. We worked with carpet knives... 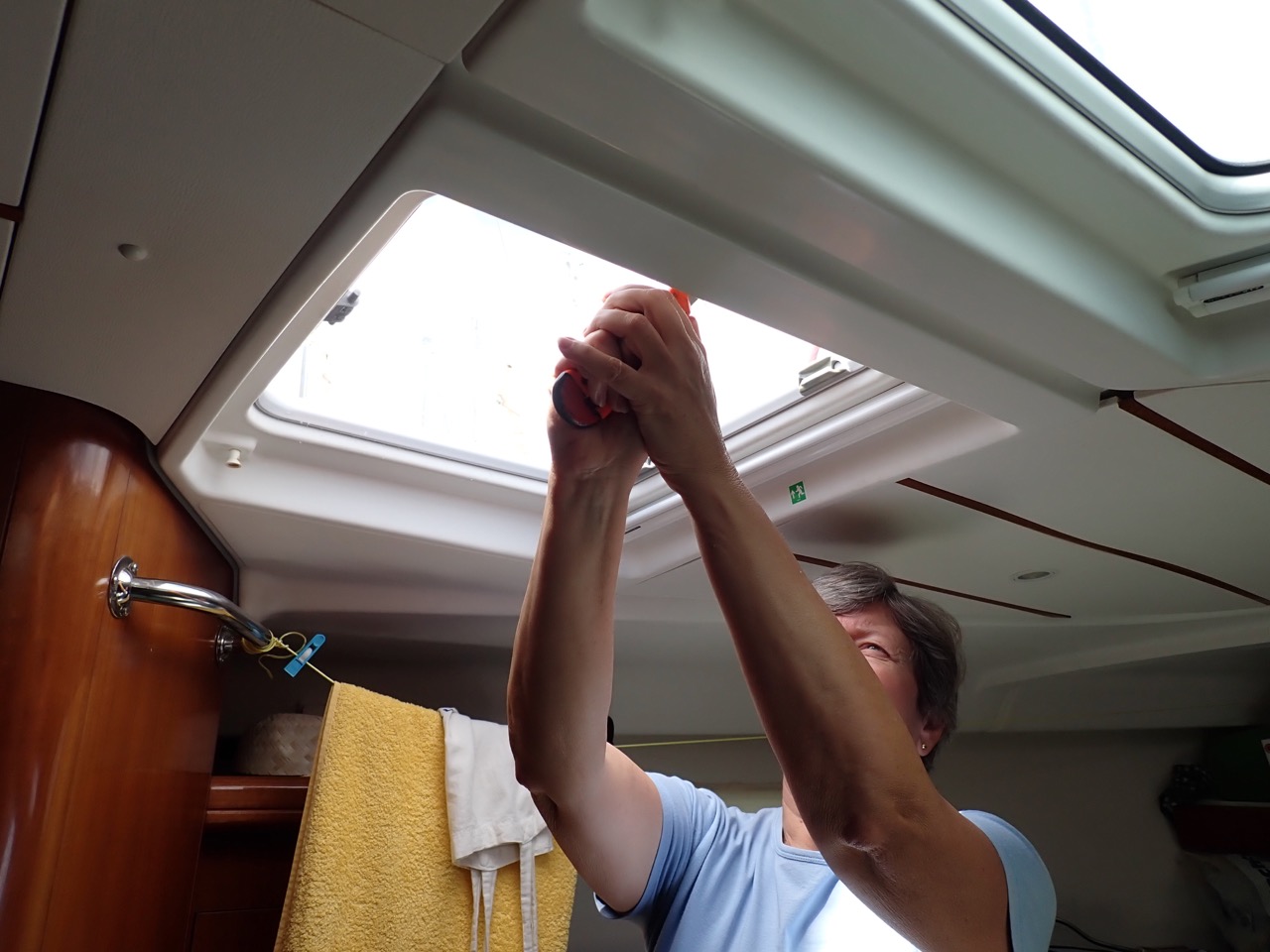 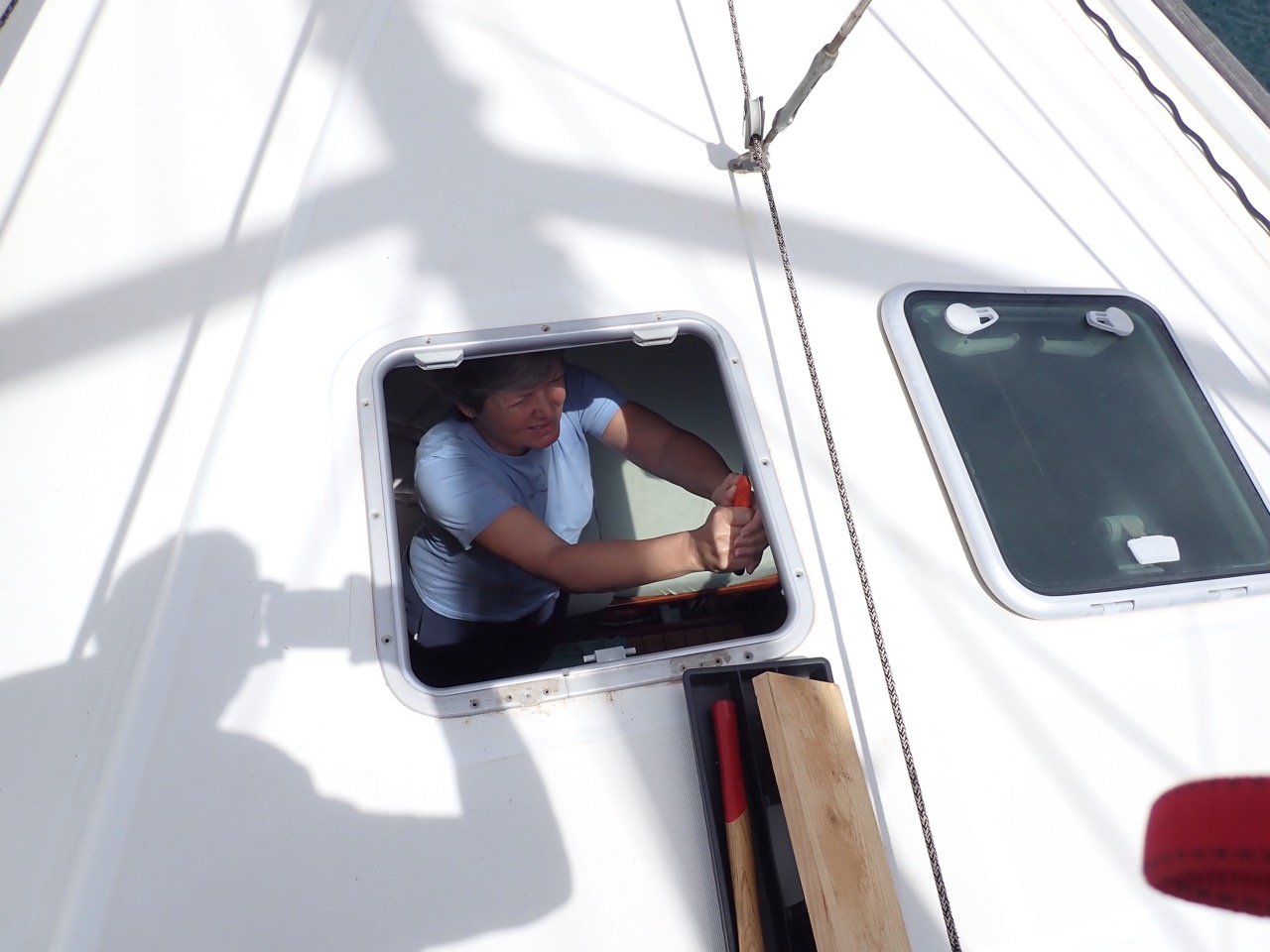 ...spatulas and wooden pegs and finally managed to separate the old frame from the deck. 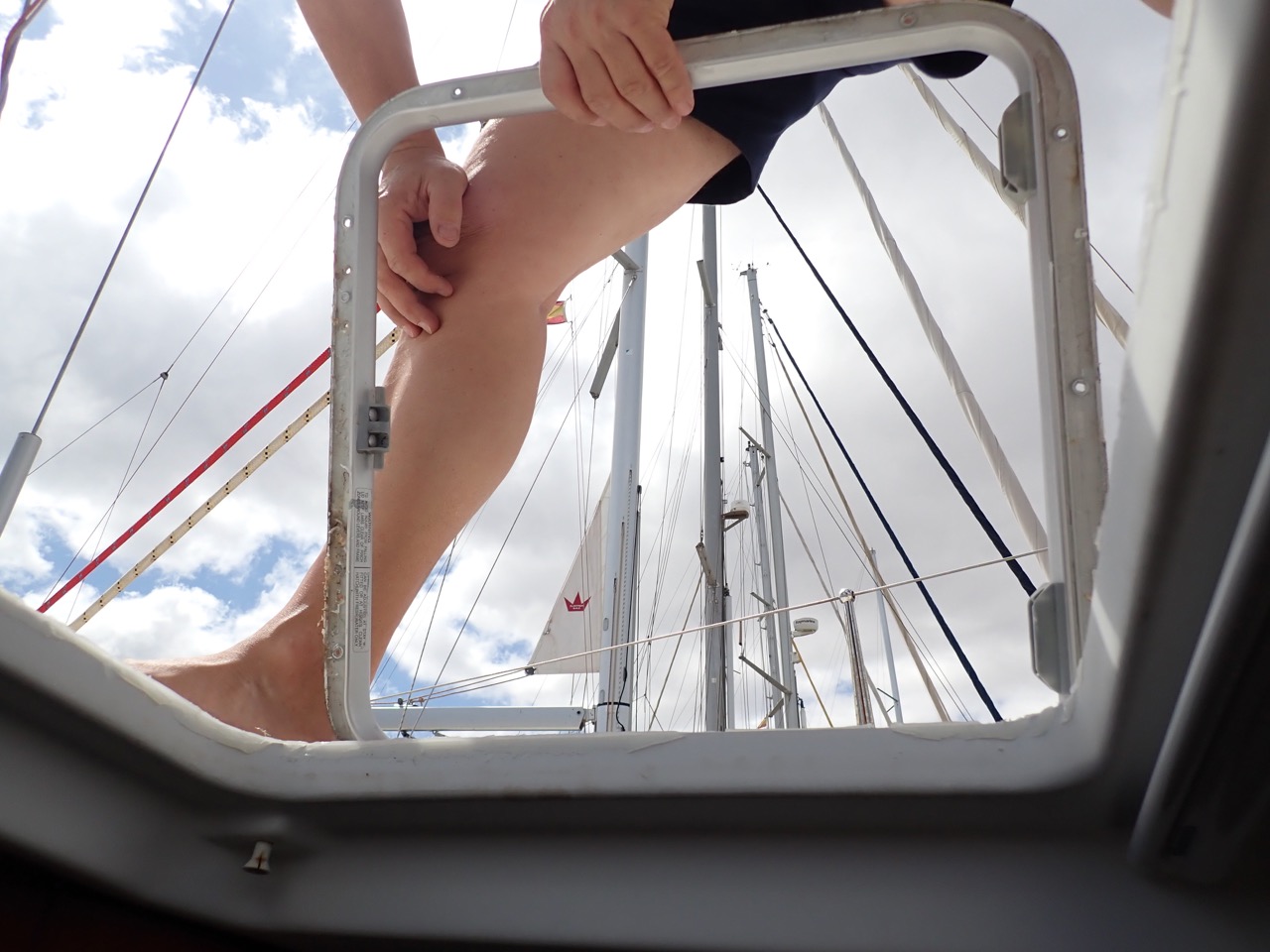 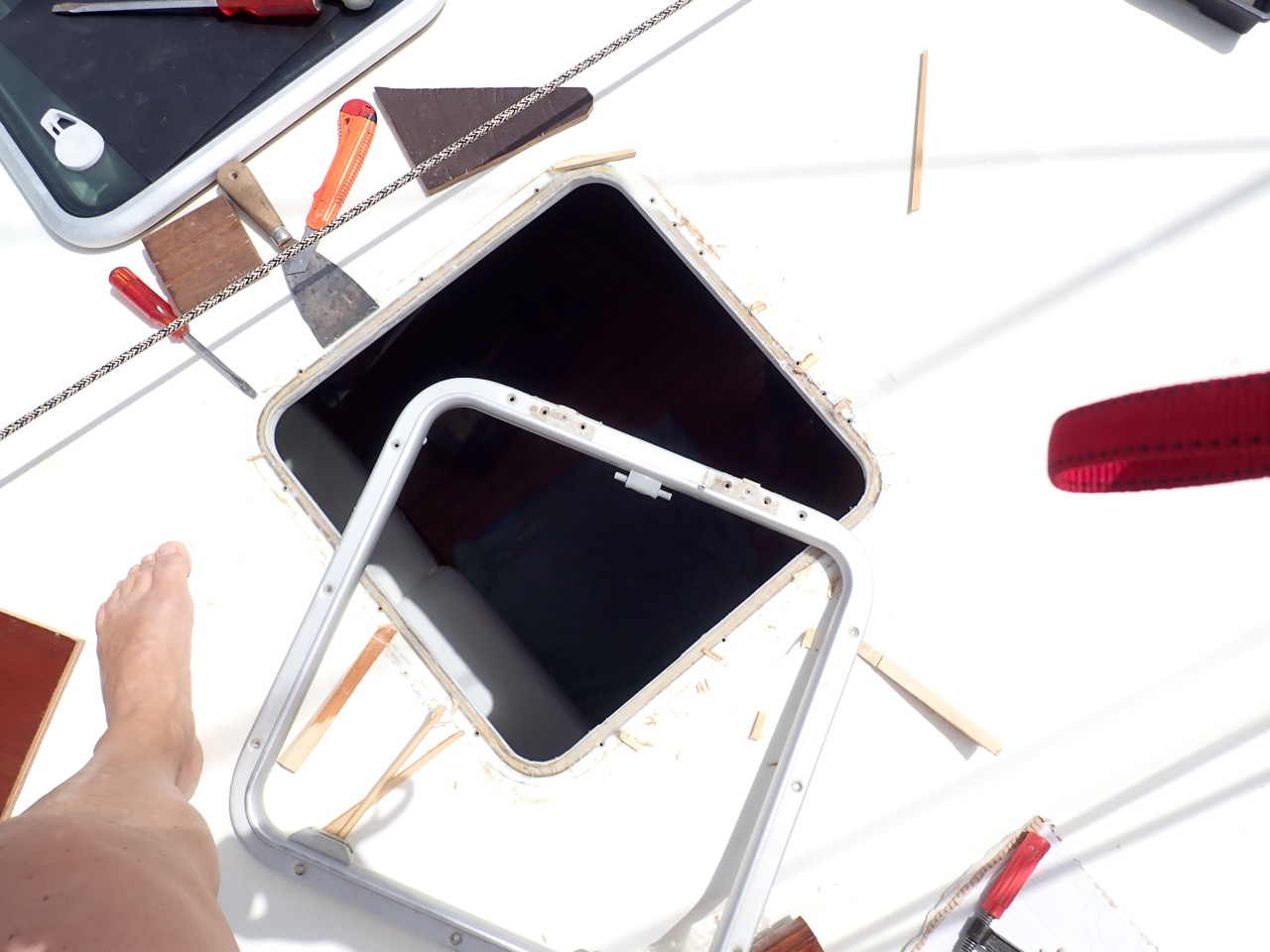 We naively thought that all we need to do after this is a bit of cleaning of the deck around the hole and then we could glue the new hatch into its place. Well... Once we put the new hatch into the hole for the test we realised it's too small. One centimetre on each side. It was a big shock. Obviously we made a mistake when ordering it. We were both frustrated and angry. So, what do we do now? First we needed to close the hole in the deck, because the forecast for next day was rain. Lots of rain. Here, in Lanzarote, where it almost never rains. So we put a big piece of insulation, like the one we used in our fridge, on top of the hole and over it we tied an even bigger piece of tarp, Sunbrella actually. This is how it looked from below. 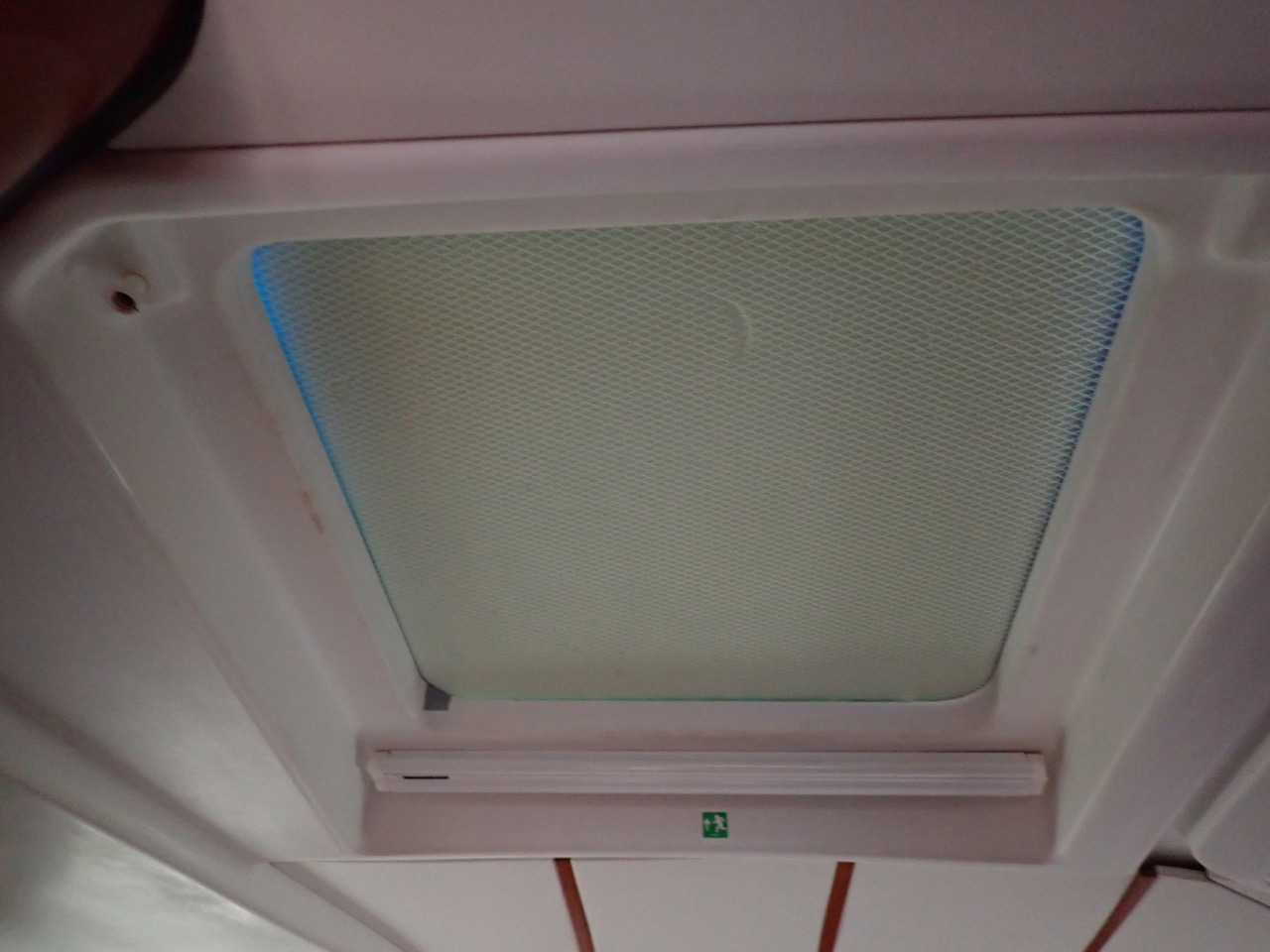 Then we decided to clean the old hatch and try to repair it. It is a looooot of work, over the years we tried to stop the hatch from leaking with silver tape, which we now had to remove. Even with the blow drier (to heat the glue of silver tape), tweezers and lots of patience, the progress was very slow. 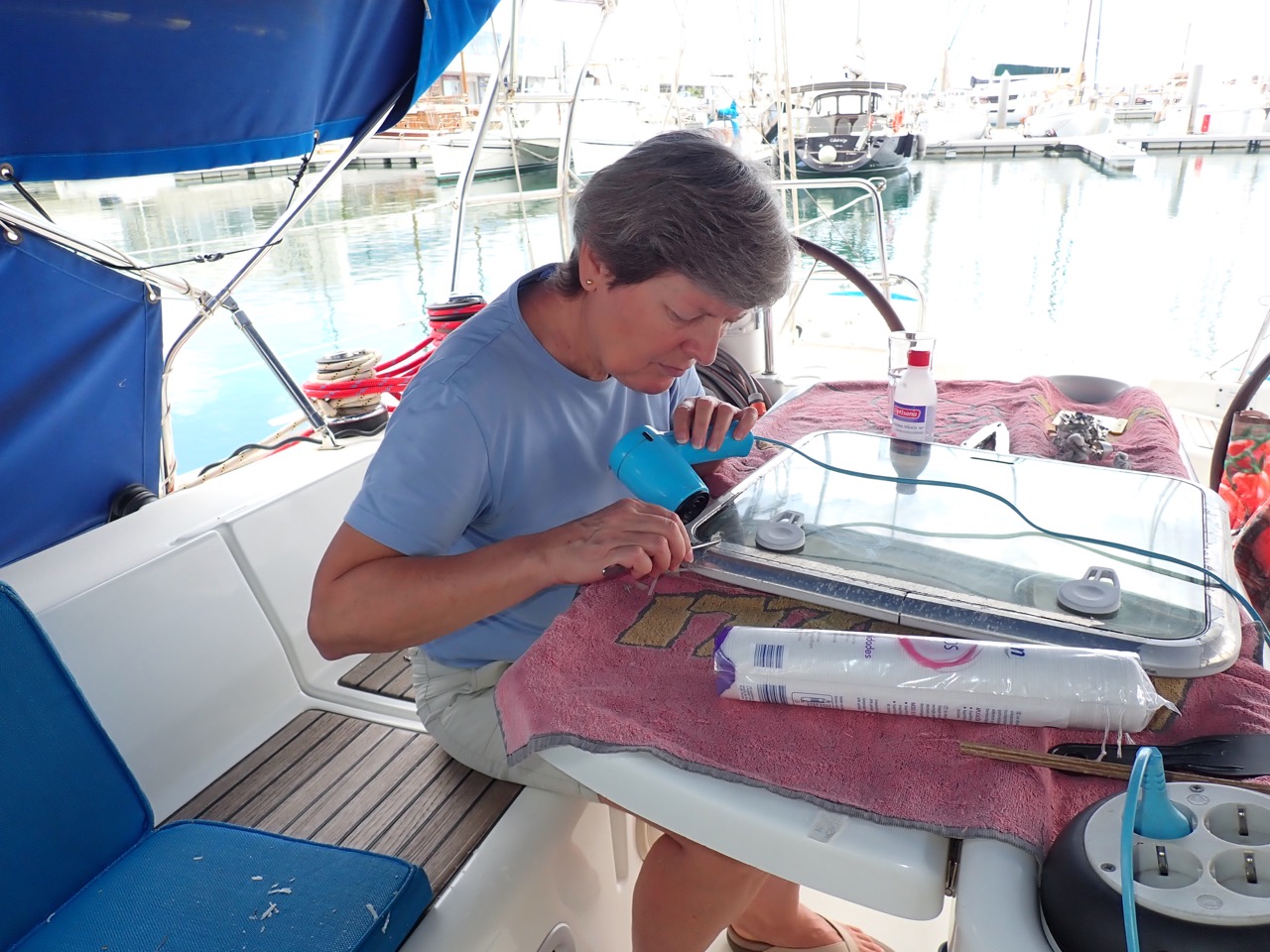 Next day the rain came. It was much more than we ever saw here. The covering for a hole in the deck we made a day before worked well, but the sprayhood was still leaking. It will need another coat of water proofing liquid. 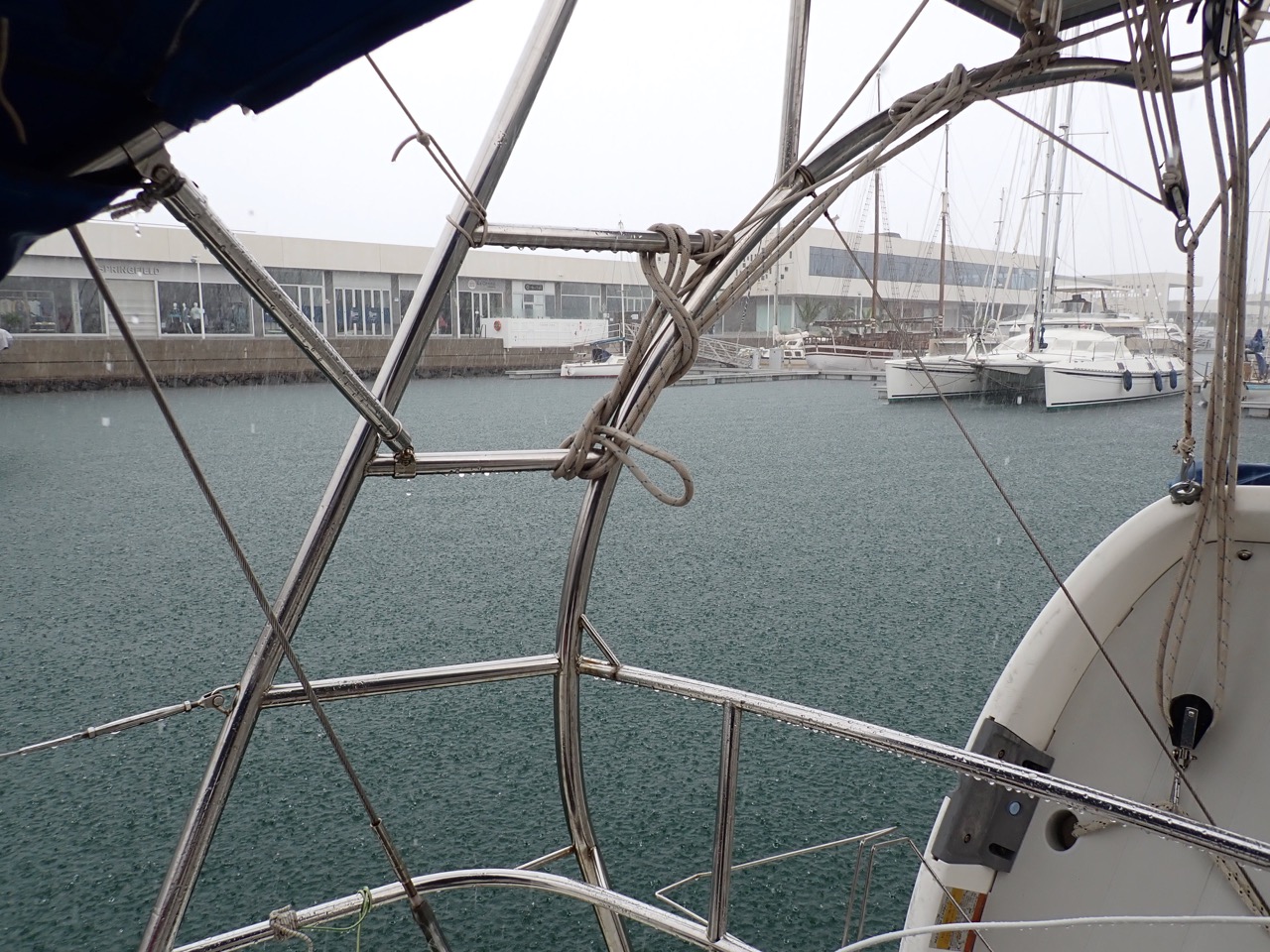 Captain went to bathroom without umbrella and came back completely wet. I guess the nature was grateful for all the rain, people maybe not so much - the streets of Arrecife got flooded and some cars got stuck in the water. 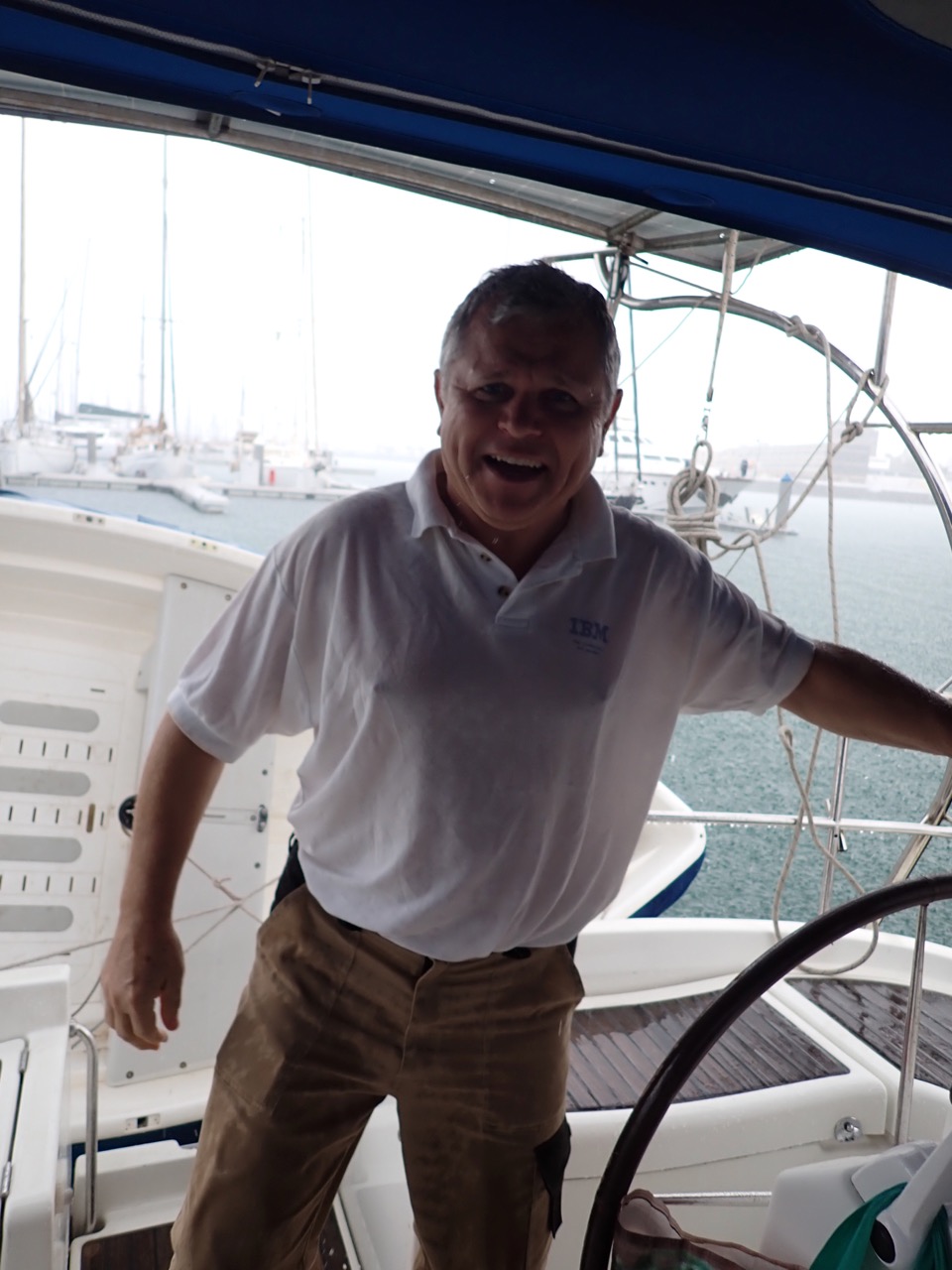 Sprayhood wasn't the only thing in the boat that was leaking. One more hatch in saloon will need to be repaired as well, and the big panoramic window that we were re-sealing in Autumn while we were in marina Rubicon, is also leaking again. On boat you just never run out of work.

It took us few more days to clean the old hatch, disassemble it... 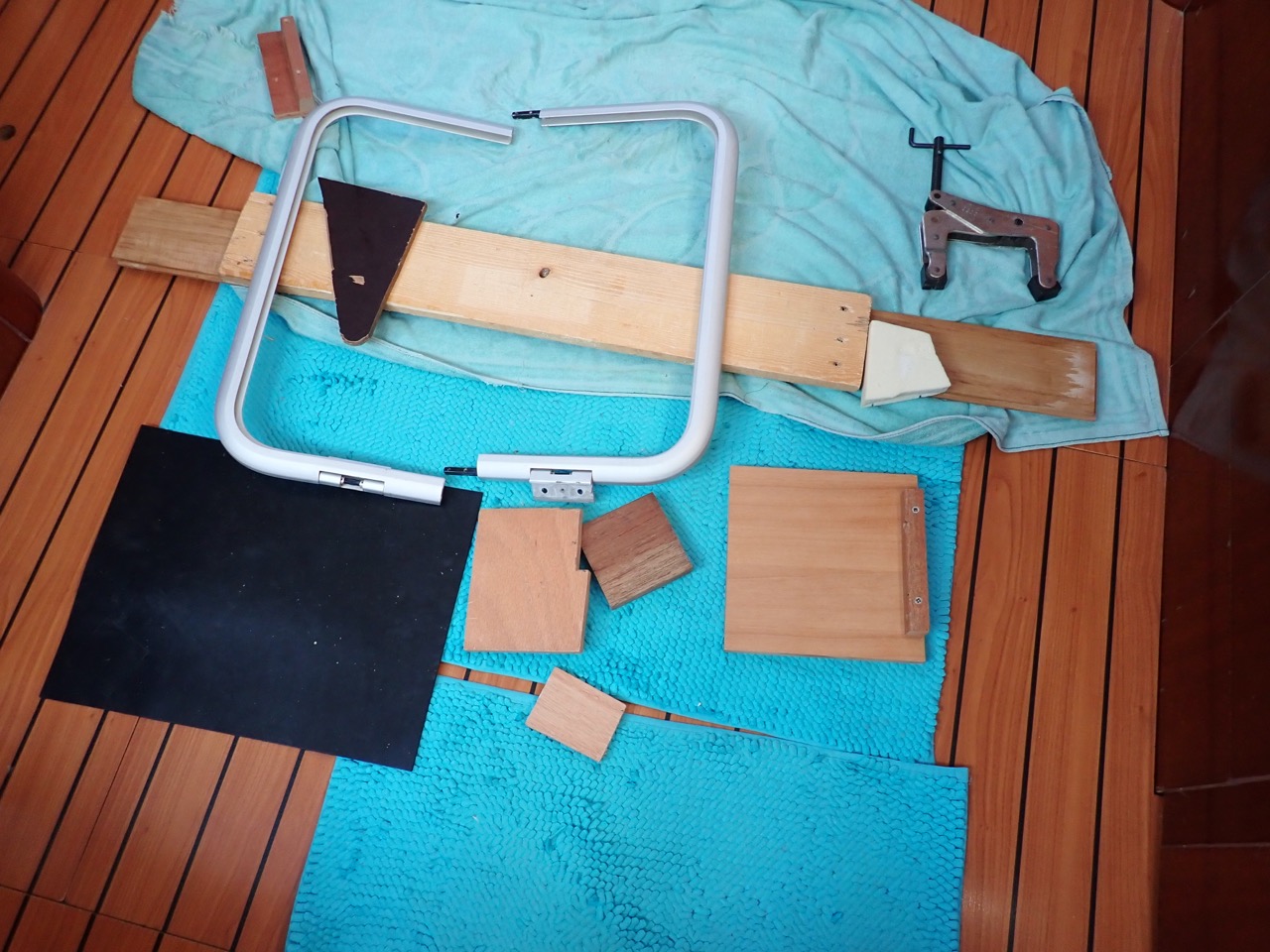 ...straighten the bent parts without breaking them... 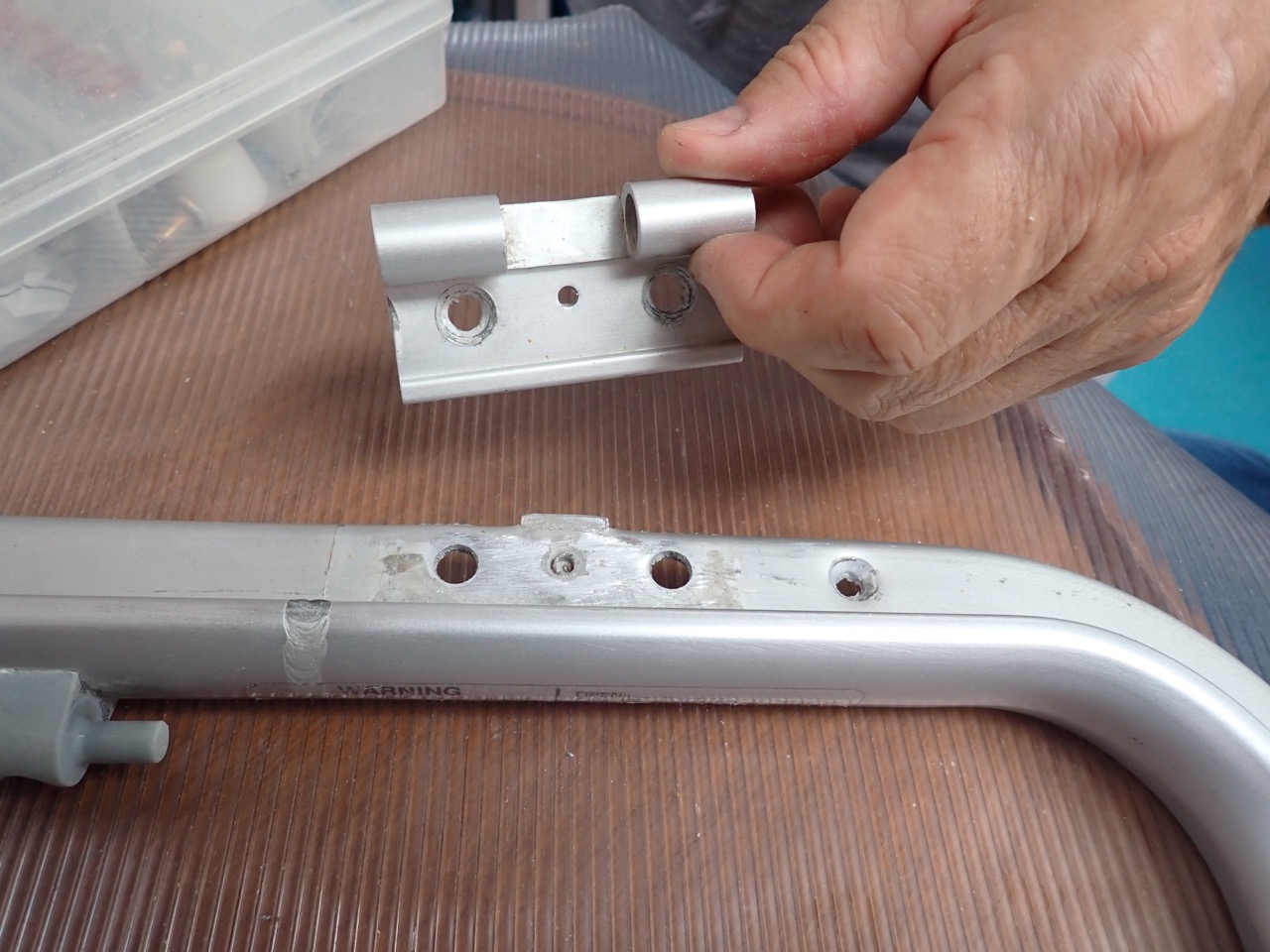 ...replace the seal and put everything back together. Just to put hinges back together took couple of hours. And then today was the big day - we put hatch into the deck for test and everything looked good and aligned and level. Then we put some SikaFlex on the frame... 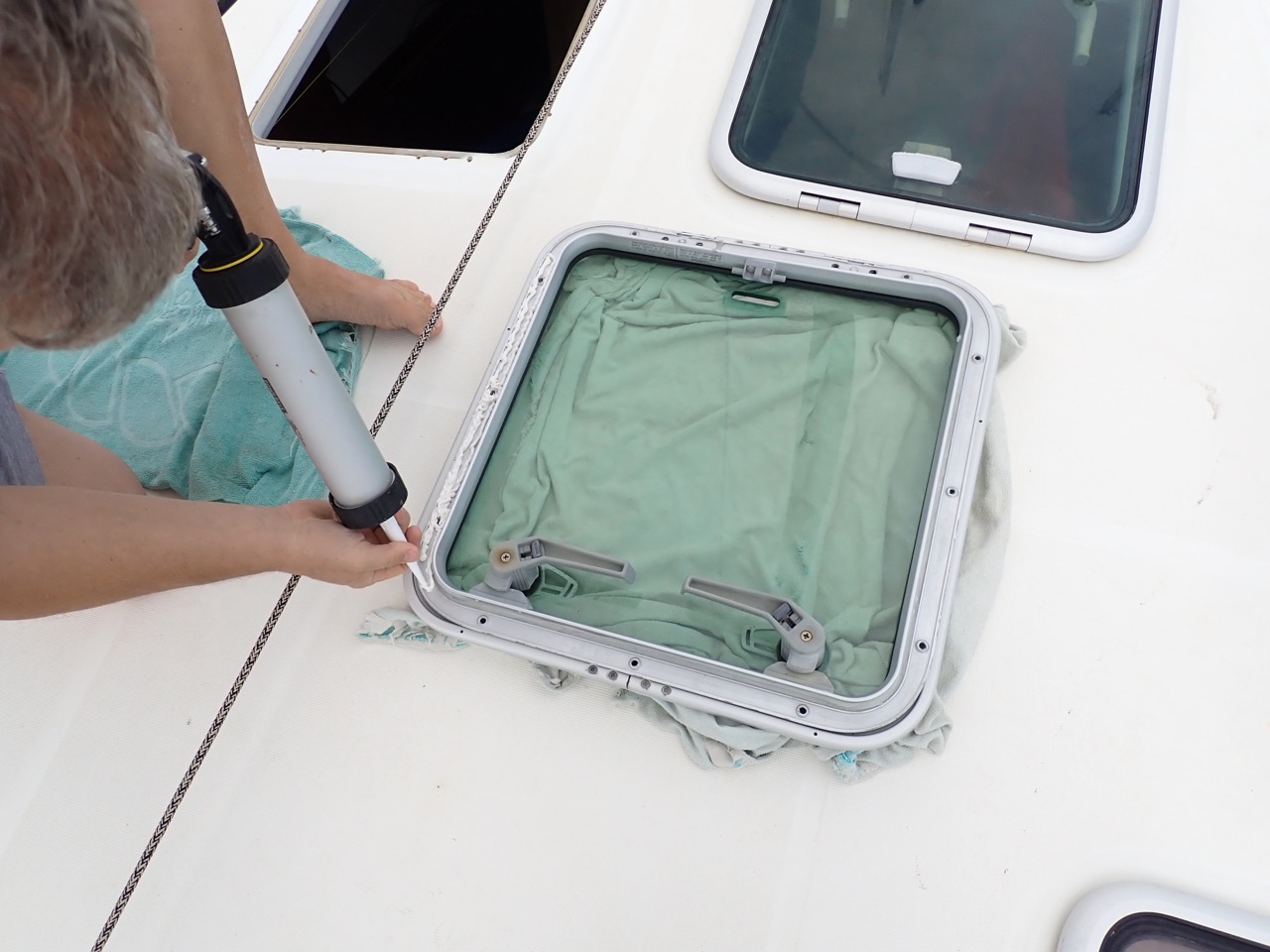 ...and put the whole thing into its place and screw it down. 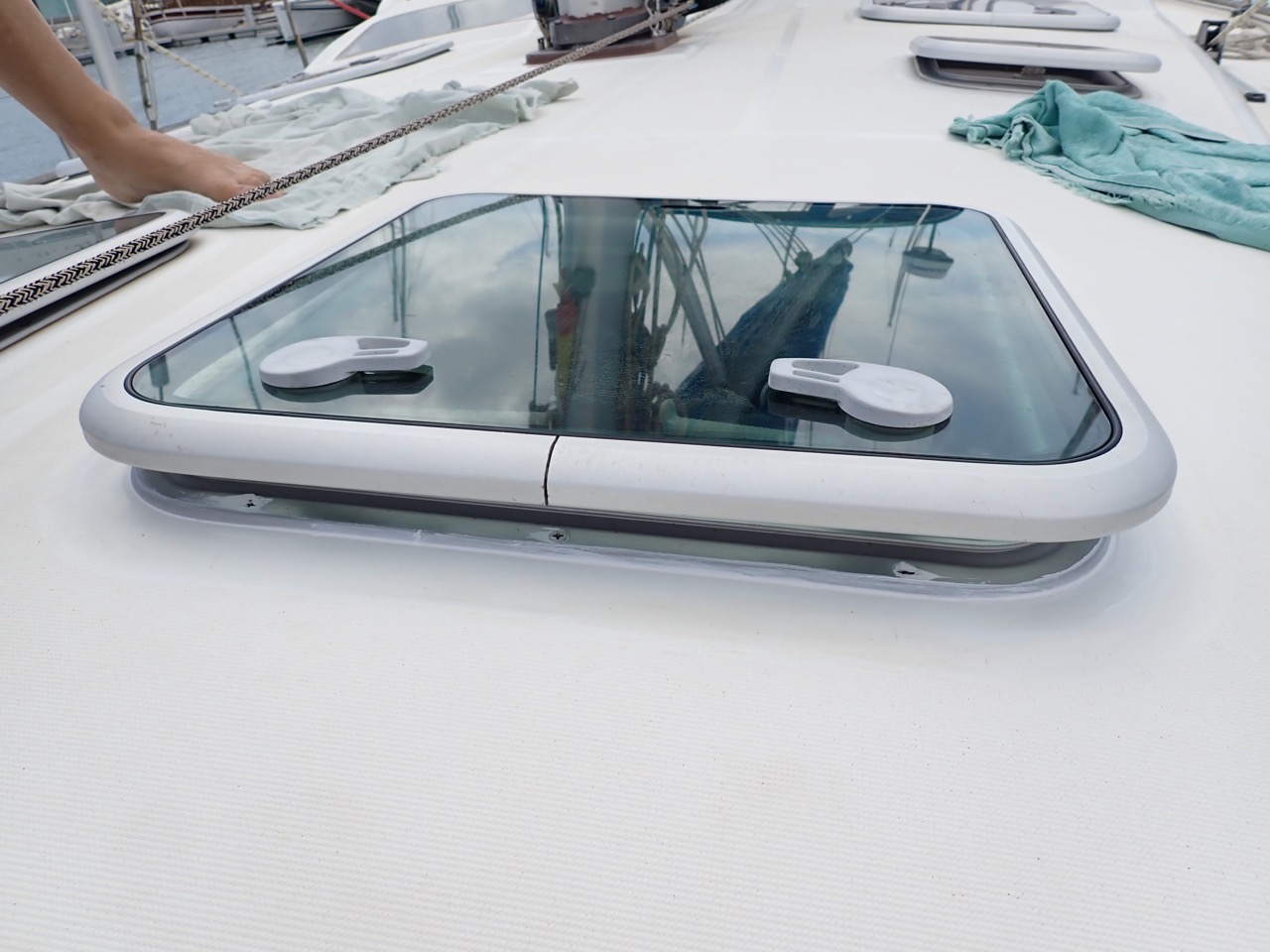 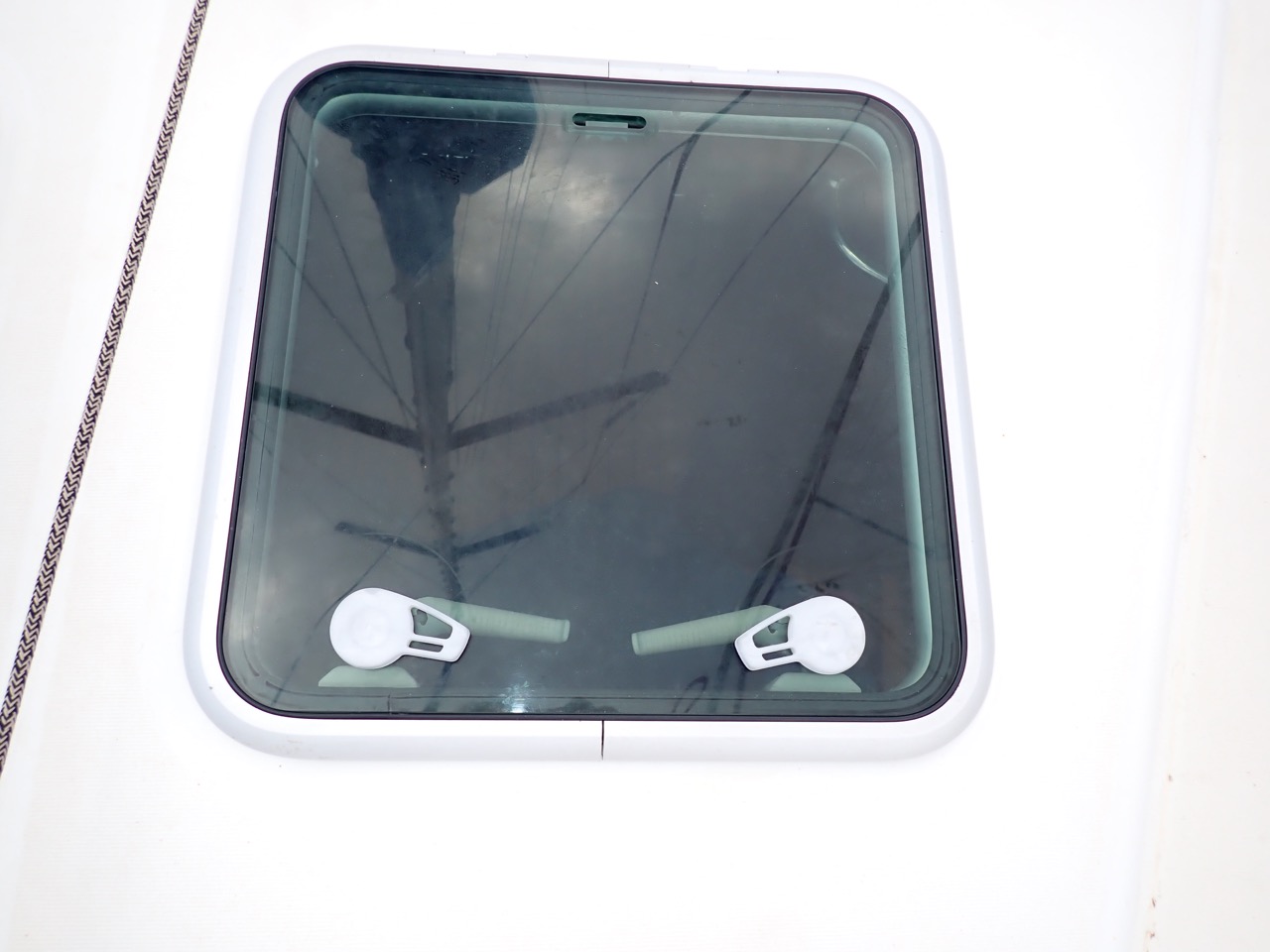 ...everything nicely aligned and the seal sits nicely and even on the frame. It never looked this good. Hope the water will stay out and then we'll be very happy. 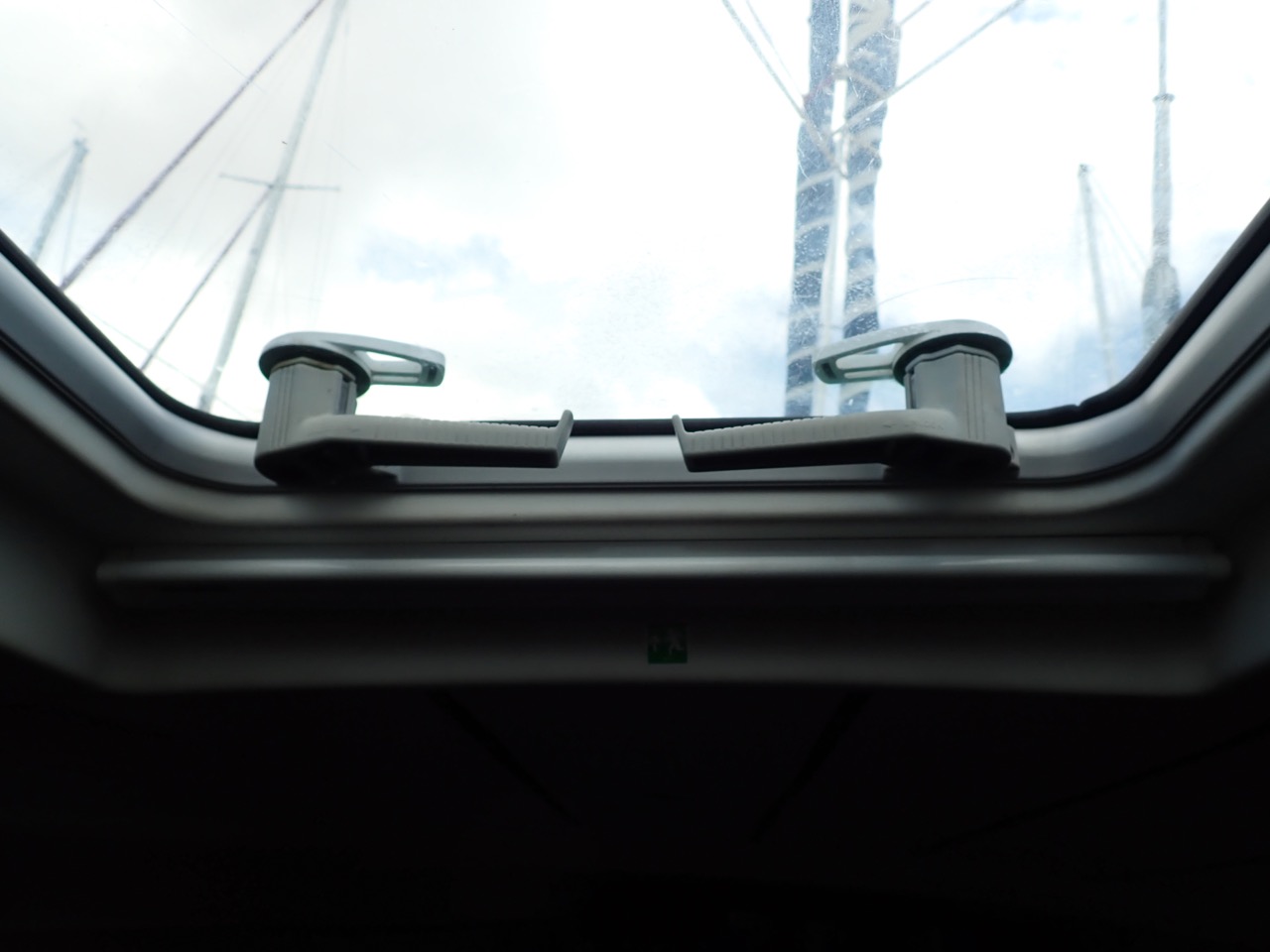 Next hatch will surely take much less time and by the time we finish it, we'll be experts.
Posted by Heron at 11:23:00 PM